Yves here. It is striking how many times you’ll see the less than rosy career prospects for young people (outside the elites) combined with their debt servitude mentioned in economic studies or in passing in the press as if it were some sort of new normal everyone ought to accept. Why does it take a study by Sanders to get this issue out of the shadows? Maybe because too many vested interests are profiting?

Separately, props to Teen Vogue for being first to publish this story.

A new government study commissioned by Vermont Sen. Bernie Sanders details how crushing student loan debt and stagnant wages are threatening to make millennials the first U.S. generation with a lower quality of life than their parents.

The Government Accountability Office report (pdf), obtained Wednesday by Teen Vogue, found that millennials between the ages of 25 and 37 have substantially less wealth, lower homeownership rates, and fewer retirement resources than Generation X and the Baby Boomers.

“The millennial generation (those born between 1982 and 2000) might not have the same opportunity as previous generations had to fare better economically than their parents,” the GAO report states. “Millennial households had significantly lower median and average net worth than Generation X households at similar ages.”

In a statement to Teen Vogue, Sanders said the study confirms his fears about the grim financial prospects of young people in the United States.

“If we don’t fundamentally transform our economy, we are facing—for the first time in the history of this country—the possibility that our young people will suffer a worse future than their parents had,” said Sanders, a 2020 Democratic presidential candidate. “We must tell the economic elite who have hoarded income growth in America: No, you can no longer have it all.” 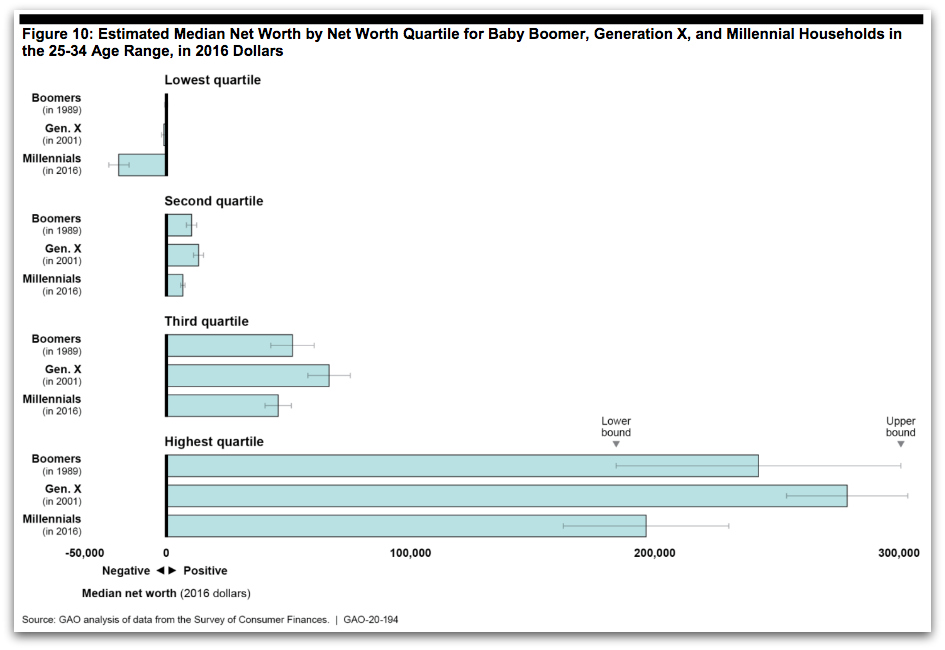 The new study, according to Teen Vogue, shows that “student loan debt is what really differentiates millennial finances from other generations, with millennials more likely to have student debt that exceeds their annual income.”

The report says that “high levels of student debt may affect the ability to accumulate wealth, which may be why average net worth levels have decreased for college graduates.”

Sanders is the only 2020 Democratic presidential candidate who has proposed wiping out all $1.6 trillion in U.S. student loan debt currently held by around 45 million Americans. The Vermont senator, who consistently polls at the top of the 2020 field among younger voters, has also proposed making public colleges, universities, and trade schools tuition-free.

“It is about time we take a hard look at this research and stand up for our young people who dream of making it into the middle class,” Sanders said Wednesday. “In the richest country in the history of the world, we have an obligation to turn this around and make sure our kids live healthier and better lives than we do.”