Yves here. Quelle surprise! Economic decline is a big driver of populist discontent in the EU.

Support for Eurosceptic parties and the rise of populism threaten not only European integration, but peace and prosperity on the continent more broadly. Rather than attributing their rise to the individual characteristics of voters – such as age or income – this column takes a different approach. Using results from recent legislative elections to map the geography of EU discontent, it finds that purely geographical factors – chiefly, long-term economic and industrial decline – are the fundamental drivers of anti-European voting.

Support for Eurosceptic parties has soared in parallel with the rapid rise of the populist wave currently engulfing Europe. Discontent with the EU is purportedly driven by the very factors behind the surge of populism: differences in age, wealth, education, or economic and demographic trajectories. New research mapping the geography of discontent across more than 63,000 electoral districts in the EU challenges this view. It shows that the rise of the anti-EU vote is mainly the consequence of long- to medium-term local economic and industrial decline in combination with lower employment and a less educated workforce. Many of the other suggested causes of discontent matter less than expected, or their impact varies depending on levels of opposition to European integration.

The Growth of Anti-EU Voting

On 24 June 2016, citizens of the UK and the rest of the world woke up to the news that Britain had voted to leave the EU. Although many polls had predicted a tight outcome, the overwhelming expectation – including by most leaders of the ‘Leave’ campaign – was that Britain would vote to remain in the EU.

Parties strongly opposed to European integration tend to advocate leaving the EU – as has been the case with the UK Independence Party (UKIP), the Dutch Party for Freedom, and the French Front National – or scaling it back to a loose confederation of states – as proposed by the Italian Lega, the German AfD, and the Hungarian Jobbik. Parties that are somewhat opposed to European integration, such as the Italian Movimento Cinque Stelle or the Hungarian Fidesz, want the EU to change substantially but do not necessarily advocate leaving the Union or turning it into a loose coalition of sovereign states. 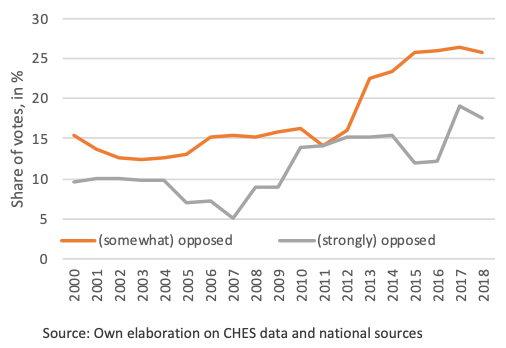 Researchers trying to assess the motives behind anti-establishment and Eurosceptic votes have mainly concentrated on the individual characteristics of voters, identifying them as “older, working-class, white voters, citizens with few qualiﬁcations, who live on low incomes and lack the skills that are required to adapt and prosper amid the modern, post-industrial economy” (Goodwin and Heath 2016). Individuals ‘left behind’ by the modern economy are much more likely to turn to or find shelter in anti-establishment political options: “such ‘left-behind’ voters feel cut adrift by the convergence of the main parties on a socially liberal, multicultural consensus, a worldview that is alien to them” (Ford and Goodwin 2017). Age, education, and income thus form the ‘holy trinity’ of the populist voter (Ford and Goodwin 2014, Hobolt 2017, Becker et al. 2017). As summarised by Los et al. (2017) regarding Brexit, “citizens who were older, or lesser educated, or socially conservative or lower paid, were all more likely to vote leave, while those who voted remain tended to be on average more highly educated, younger, earning higher incomes and more socially progressive”.

Our new research (Dijkstra et al. 2019) challenges these views, emphasising the long-term economic and industrial decline that planted the seeds of the current rise in Eurosceptic voting more than any other factors.

Our work proceeds by mapping, for the first time, the geography of EU discontent, using electoral results in recent national legislative elections,1 in a total of 63,417 electoral districts (or equivalent), covering all member states of the EU. The results show that in many EU member states, parties strongly opposed to EU integration have become a force to be reckoned with, having garnered more than 25% of the vote in three EU member states: Austria, Denmark, and France (Figure 2). Others, such as Cyprus, Malta, Romania, and Slovenia, have so far remained immune to the anti-EU wave. But these countries are increasingly the exception, not the rule (Figure 2).

Figure 2 Share of vote for parties opposed or strongly opposed to European integration, 2013-2018 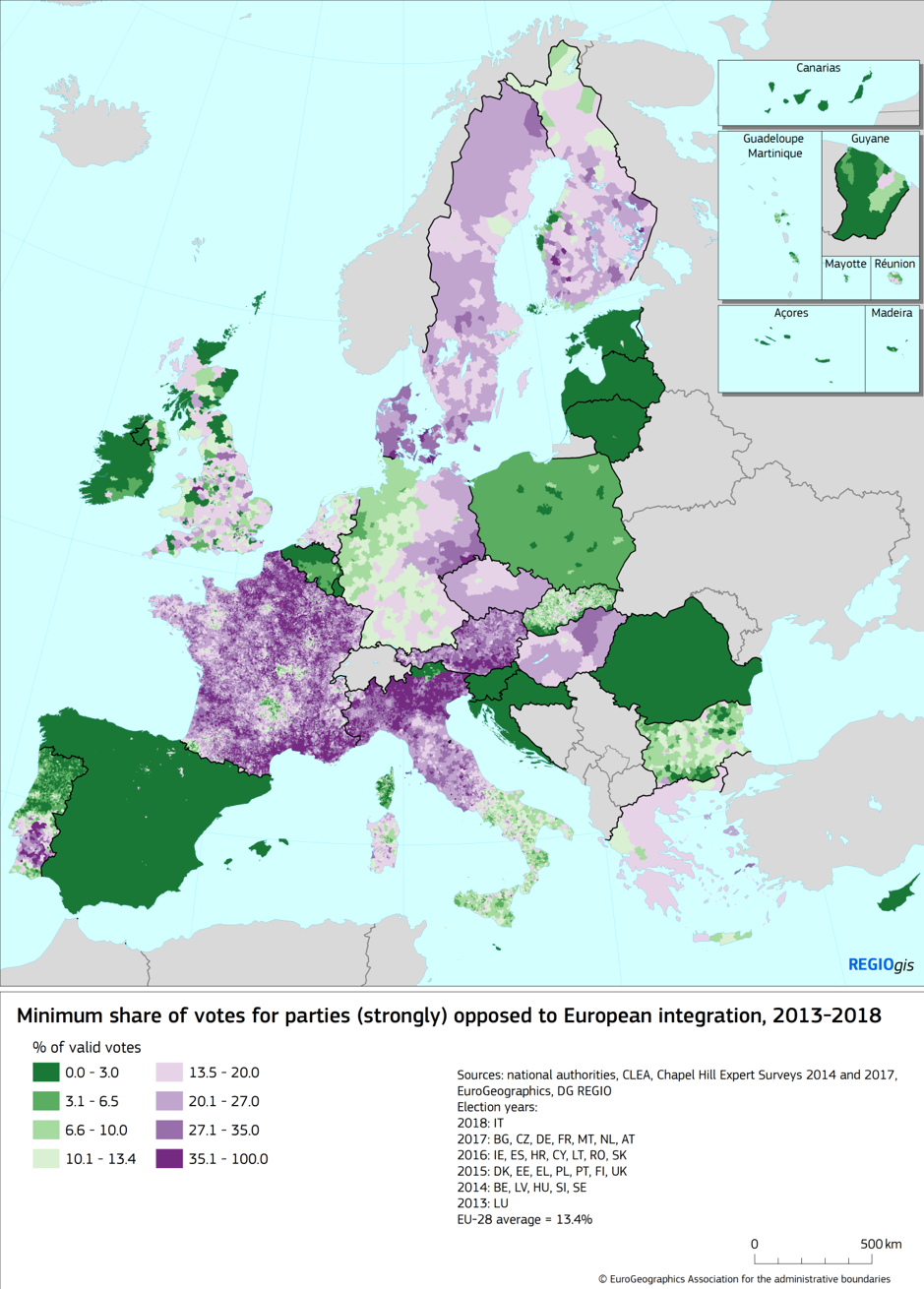 Votes for parties opposed and strongly opposed to European integration are spread across many parts of the EU. Southern Denmark, Northern Italy, Southern Austria, Eastern Germany, Eastern Hungary, and Southern Portugal are hotspots of anti-EU voting. Rural areas and small towns are more Eurosceptic than bigger cities. The anti-European vote is far lower in Lille, Metz, Nancy, or Strasbourg than in the surrounding countryside (Figure 2). The same applies in East Germany, where the anti-European vote is far less prominent in Berlin, Dresden, or Leipzig, than in surrounding areas; the two largest cities in Northern Italy – Milan and Turin – stand against a large number of medium-size cities, such as Bergamo, Brescia, Cremona, Mantua, Pavia, and Vercelli, as well as smaller cities and rural areas. Northern and Eastern Denmark, Sweden, Finland, and the Czech Republic also have a strong presence of radical anti-European parties.

If the parties that are somewhat opposed to European integration are taken into consideration, their vote exceeded 25% of the total in ten member states. In Greece, Hungary, Italy, and the UK, the share was over 50% (Figure 3). 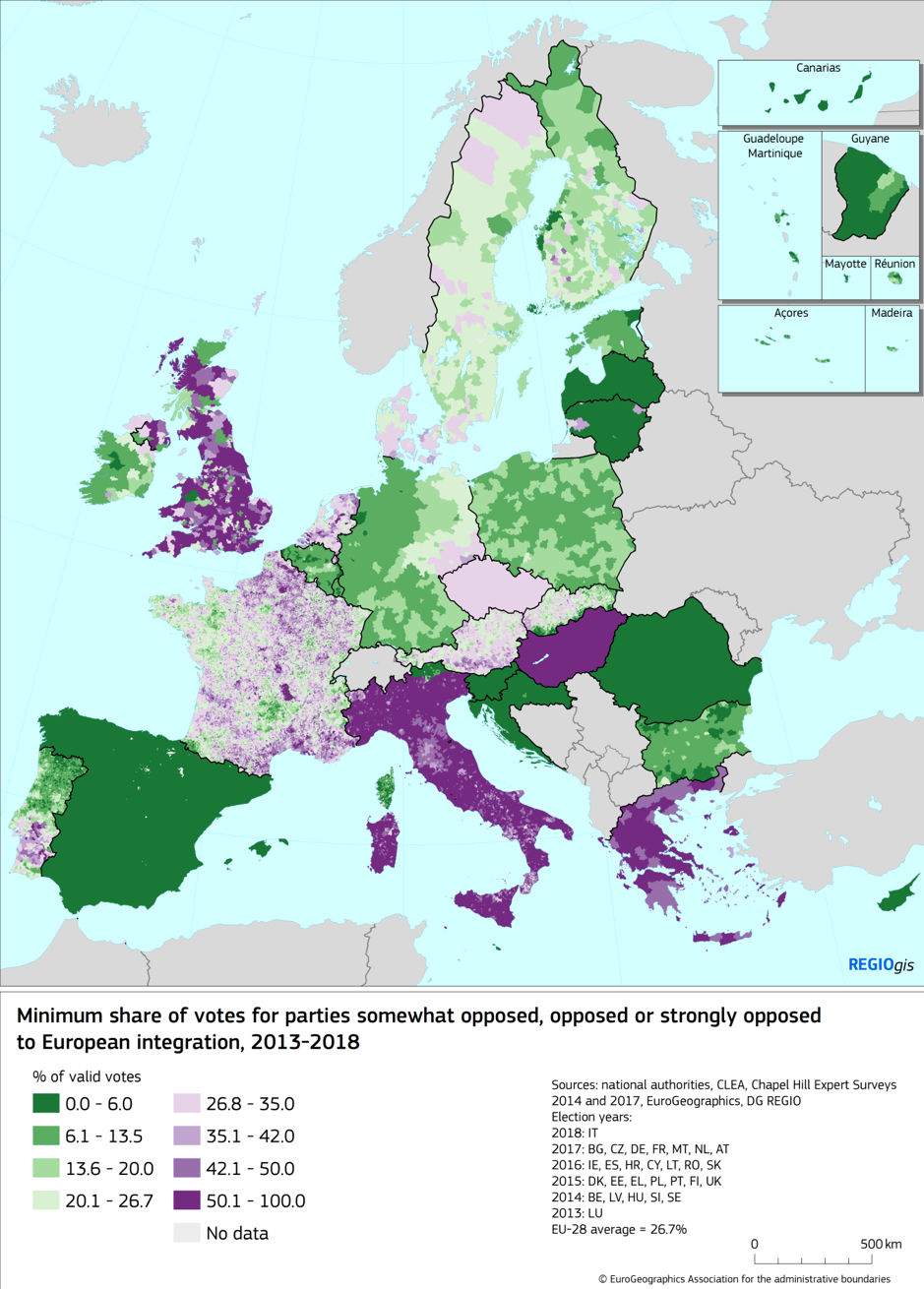 What Determines the Strength of the Eurosceptic Vote?

Our maps are used to estimate, by means of econometric models, what determines the share of the Eurosceptic vote. They combine territorial factors (such as medium- to long-term economic, industrial, demographic, and employment decline) with population density or the recent migration balance, and factors linked to those considered ‘left behind’ (such as  age, education, wealth, or unemployment) to explain the share of votes for parties opposed to European integration.

The maps show that while education is indeed an important factor for support or opposition to European integration, and that lack of employment opportunities also ranks high on the list of factors behind the rise of Eurosceptic vote, evidence for the dominant narrative of those ‘left behind’ ends there. One important difference with past analysis relates to wealth. Most previous research has highlighted how anti-system voters came from poor backgrounds. Yet, while local wealth matters, controlling for other factors – and especially for long-term economic decline – reveals that richer places in Europe display a greater opposition to European integration. In other words, regions with a higher GDP per head, faced with the same level of economic decline, are more likely to vote for Eurosceptic parties. This would explain the attachment of northern Italians to the Lega. Despite remaining, on average, amongst the richest citizens of the EU, 30 years of no economic growth have pushed many northern Italians towards anti-system and anti-European political options.

Moreover, the presence of an elderly population – one of the most frequent explanations for the strength of populism – does not result in a greater anti-EU vote. Once the economic trajectory, education levels, and wealth of a place are taken into account, areas with a large elderly population vote in smaller numbers for both radical and moderate anti-EU parties.

Purely geographical factors, which have attracted less attention, turn out to be robust drivers of anti-European voting. Density and rurality matter for this type of electoral behaviour, but play less of a role than that identified by US political scientists (e.g. Rodden 2016, Cramer 2017). In Europe, once moderate anti-European parties are considered, there is a reversal in the role of density: urbanites turn out to be more likely to vote anti-European than people living in less dense suburban and rural places.

However, it is long-term economic and industrial decline that emerge as two fundamental drivers of the anti-EU vote. As indicated by Gordon (2018), it has been long forecast that persistent territorial inequalities could lead to major political breakdown. But more than the gap between rich and poor regions, the long-term economic and industrial trajectory of places makes the difference for the anti-system vote. Corroborating the theory of ‘places that don’t matter’ (Rodríguez-Pose 2018), the long-term decline of areas that saw better times – often with a grander industrial past – combined with the economic stagnation of places hitting a middle-income trap, provide fertile breeding grounds for the brewing of anti-system and anti-European integration sentiments.

Overall, the vote for Eurosceptic parties in the EU is driven by specific combinations of socioeconomic and geographical factors. It is often the case that the latter shape the influence of the former at the ballot box. Hence, once long-term economic and industrial decline are addressed, it becomes difficult to assert that pro- or anti-system divides “cut across generational, educational and class lines” (Goodwin and Heath 2016). Of these three cleavages, only the educational divide remains, while the idea that age and wealth matter for anti-EU voting is much more difficult to sustain. In declining places, the old and the rich are more likely to vote pro-European. Large shares of the elderly and the poor happen to live in economically and industrially declining places, but across the whole of Europe, they are not necessarily more inimical to European integration than the rest of the population.

Hence, anti-EU voting reflects long-term economic trajectories; once they are controlled for, only education, density, and lack of employment bear out expectations.

Fixing the ‘Places That Don’t Matter’

Anti-EU voting is on the rise. Many governments and mainstream parties seem to be at a loss as to how they should react to this phenomenon. Our research offers some initial suggestions about how to address the issue. If Europe is to combat the growing geography of EU discontent, fixing the so-called ‘places that don’t matter’ is one of the best ways to start. Responding to this emerging geography of EU discontent requires addressing the territorial distress felt by places that have been left behind, and promoting policies that do not merely target, as is common, either well-developed large cities or the least developed regions. Viable development intervention designed to address long-term trajectories of low-, no-, or negative-growth regions and provide solutions for places suffering from industrial decline and brain drain is urgently needed. Moreover, policies must go beyond simple compensatory and/or appeasement measures, which will require tapping into the often overlooked economic potential of these places and providing real opportunities to tackle neglect and decline.

Place-sensitive policies (Iammarino et al. 2019) may thus be the best option for confronting the economic decline, weak human resources, and low employment opportunities that underlie the geography of EU discontent. They may also represent the best method to stem and revert the rise of anti-establishment voting, which is threatening not only European integration, but also the very economic, social, and political stability which have overseen the longest period of relative peace and prosperity the continent has witnessed in its long history.