Boris Johnson achieved what Theresa May hoped to do with her snap election gamble in 2016: deliver a crippling blow to Labour. The Tories are on track to secure 364 seats, or a 38 seat majority [update: calculated US style, as in seats in excess of what is needed to win a vote]

While the Tory margin of victory is only depicted as “comfortable” in the Wall Street Journal the results are terrible for Labour. The Tories breached the famed Labour “red wall,” taking seats across the working-class districts in the heart of the country. The late-hour hand-wringing by the Torygraph that the Brexit Party might still have enough life left to do the Conservatives some harm proved to be wrong.

Clive, who among other things goes outside London from time to time, was one of the few who has been consistent from the outset in predicting a big Tory victory. By contrast, the Financial Times last night was wobbly on Tory prospects for a solid win. 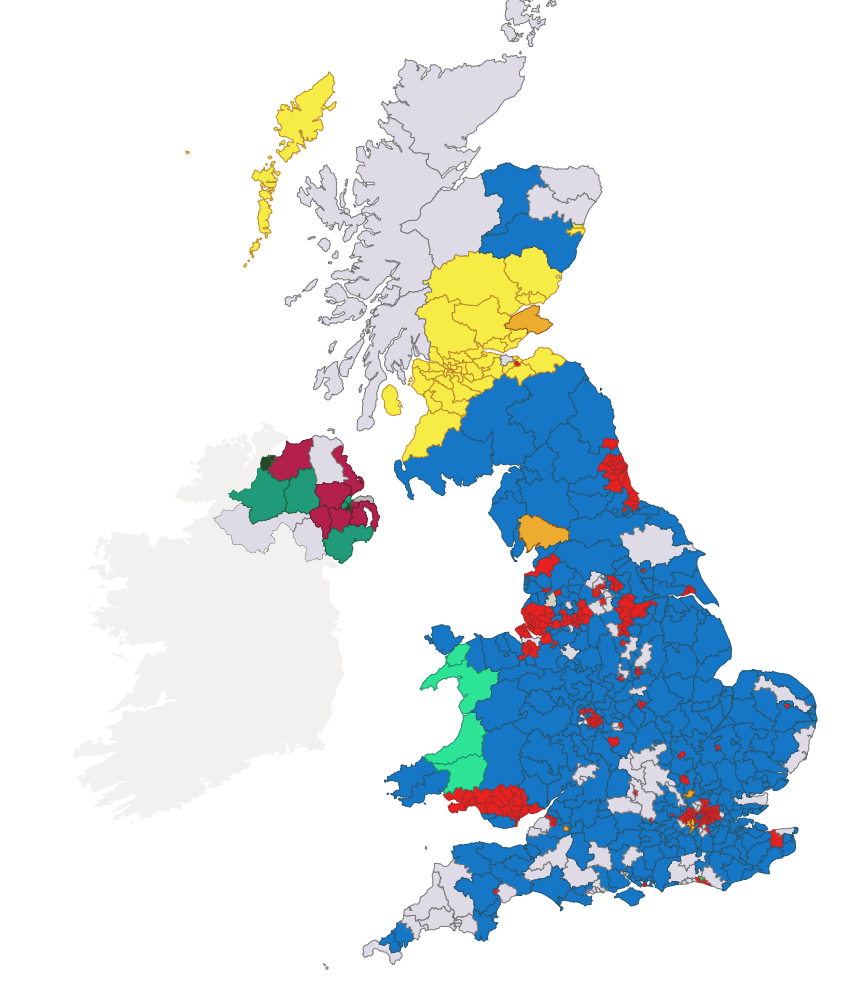 So, looking at this:
– Labour lost 2.6m voters. About 1.6m of them is likely to LD/Green/SNP. One would have to do a constituency-by-constituency analysis to see how that would change the result.
– Tories took relatively few vote from UKIP or Labour, 330k total, but possibly in key constituencies.
– That leaves about 800k voters that voted Labour before staying at home with pox-on-all-of-you (I assume).
– in England, the Tories+BP likely won the popular vote (I don’t have breakdown, but assume that each would have same vote in Scotland, and BP is almost entirely English). Only if you add Scotland it’s more even. That said, the margin would not be this large if the UK had some sort of PR.

The hot take from the BBC:

The result so far is remarkable for the Conservatives – better than many of them had hoped for.

They have won a majority which will allow Boris Johnson to make sure Brexit happens next month.

There were some astonishing results, with a number of historic Labour heartlands falling to the Conservatives.

Labour, by contrast, could hardly be in a worse position.

Jeremy Corbyn has made it clear he will go before the next election – but he wants to stay for a period of reflection. Many in his party want him to go immediately.

In Scotland, the picture is quite different.

The SNP have come close to sweeping the board – gaining seats from all their rivals.

A Tory majority at Westminster means one constitutional quarrel – Brexit – might be over, but another – on Scottish independence – will be back with a vengeance.

Labour voters have overturned decades of political tradition and defected to the Conservatives across its industrial heartlands, transforming the electoral map and ushering Boris Johnson towards a significant Commons majority.

In results that surpassed even Johnson’s wildest expectations, the Conservatives unseated Labour for the first time in decades in solid red seats from Wrexham in north Wales to Blyth Valley in Northumberland.

The shock of the exit poll, which predicted Labour’s worst general election result since the 1930s, gave way to dismay and anger as unseated Labour MPs blamed Jeremy Corbyn’s leadership for the party’s dismal showing.

At Spennymoor leisure centre, outside Durham, dejected Labour activists looked on as votes piled up for the Conservative candidates in Bishop Auckland and Sedgefield, mining communities where the closure of the pits cast a long shadow over the area’s politics.

The basic summary is as follows: total despair. Catastrophic era of darkness. The end of everything you value. Overall, not great.

Labour has been wiped out. Boris Johnson is triumphant. He is set for a majority, the likes of which we haven’t seen since the New Labour years. It is a disaster of unmitigated proportions. This is the largest set-back for liberalism and the left since the referendum result and arguably even greater than that. Is it a calamity.

Jeremy Corbyn announced he would not fight another election early this morning, after he secured re-election to his seat. And with that, the battle for the future of the Labour party began.

Corbyn said he would stay on to oversee the ‘conversation’ in Labour about his replacement. In reality that means he wants to ensure a successor of his preference. The unions will try to make sure that happens. They are unlikely to have any self-awareness or demonstrate much soul-searching about what has happened.

Corbyn supporters are screaming all sorts of nonsense, blaming Remainers and ‘centrists’ – a term which includes anyone on the non-Corbyn left – rather than the fact that their messiah was quite plainly and demonstrably ill-suited to the job and should never have been given so prolonged an opportunity to demonstrate that fact. It cost us everything.

It was indeed all about Brexit. But Brexit was never about leaving the EU. For Leave, it was about ridding the U.K. body politic of a nasty infestation of authoritarian Liberalism vine weevils which had preyed on the U.K. at will, for all species of parties, for twenty years. Invidious, insidious and you couldn’t tell it was in your political party plant pot until it was way too late. By the time you saw the leaves wilting and the flowers dropping off, it was too late. They got everywhere — Labour (Blair, Campbell, Mandelson), the Conservatives (Osbourne, Grieve, most of the Cameron era intake) and the Liberal Democrats (Clegg). The BBC was full of them, as was academia. The civil service, too. It was time to clear house and Brexit was the way to flush them out.

For Remain, EU membership was simply about stymying the Conservatives. A lot of Leave’ers neither knew nor cared what the EU was, how it worked, what its ideological direction of travel is, what its policies are and how it operated behind the scenes in terms of its internal politicking and power plays. It really didn’t matter to huge swathes of Leave’ers — it impinged on right-wing governments, whatever the electorate had decided in that political cycle, and that was all that mattered.

Mind you, we didn’t see this coming, but (unlike on negotiation dynamics) we don’t hold ourselves out as having any particular insight on UK politics. So even more so that usual, we are dependent on our sources. And with the press in the UK being if anything more partisan in the US, and having done a terrible and irresponsible job of Brexit reporting, it was even harder than usual to parse signal from noise. It wasn’t helped but the fact that the formerly-most-relaible-of-the-bad-lot YouGov poll showed a late Labour surge, lending credit to the now-clearly-wrongheaded notion that Labour was succeeding in making the election about the NHS and the sorry state of social services.

We were far from alone in expecting a closer contest. As Richard North put it: 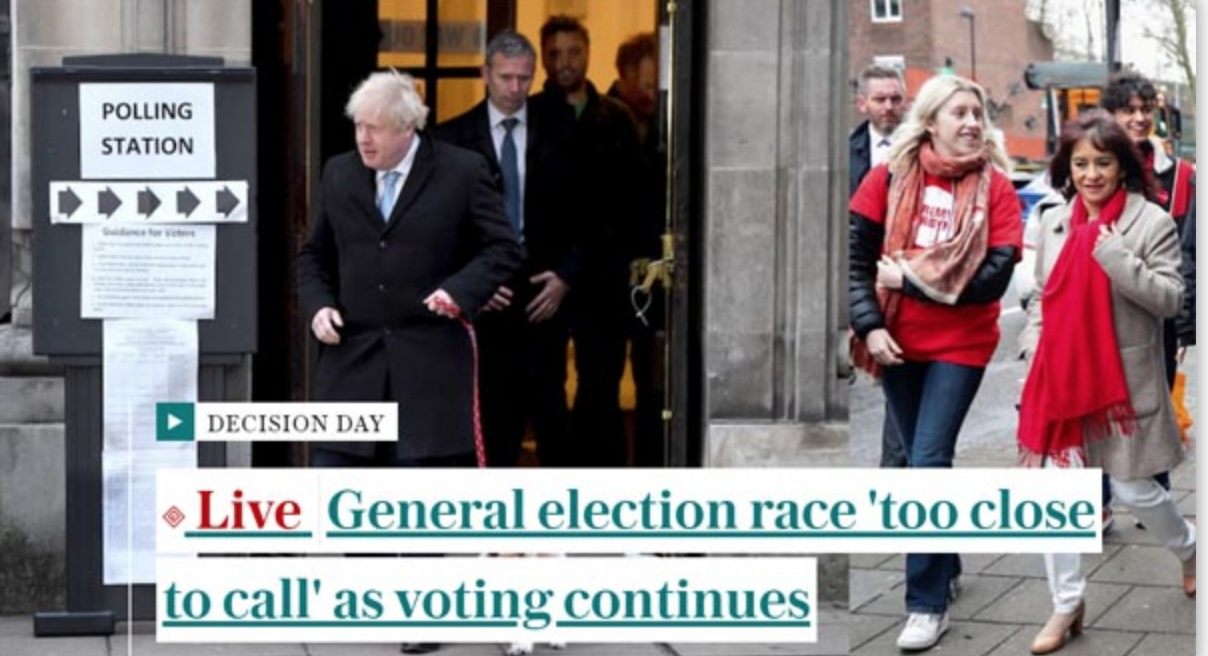 A reminder of what’s been on the Telegraph website all day. It looks as if there needs to be some blood-letting in the polling industry as well.

Let us also not forget that SNP did better than expected in taking seats from Tories, despite what critics depicted as an overloaded and too IndyRef fixated manifesto.

North’s take early on in the evening was “What comes over therefore…is that the Tories are not winning this election. Labour is losing it.” Turnout was lower than in the 2017 election, 66% v. 68%.

This defeat may indeed represent a lasting realignment of voters. There will be many post-mortems and no doubt academic studies. But what were the causes? Some initial thoughts:

Corbyn. His attempt at constructive ambiguity on Brexit was a hot mess. The party’s two referendum pitch was a turnoff given how tired voters are with Brexit (having no idea that the pain will persist and intensify after the passage of the Withdrawal Agreement. His failure to articulate a positive vision for Brexit, such a softer one, allowed Johnson to get away with his nebulous but catchy “Get Brexit done.”

Corbyn. He’d previously been only a backbencher and it showed. He lacked the signs of inner steel and decisiveness that voters expect. He was admittedly plagued by the saboteurs within of the Blairite wing. Yet the widely mistrusted Johnson executed a purge of Tory moderates. Skeptics predicted it would damage the party and Johnson. That call proved to be wrong.

As Lambert put it:

Corbyn upon his ascension to the leadership should have adopted the sage policy of Baron Harkonnen: “The man must die. He tried to help my enemies.”

Corbyn. The anti-Semitism slurs stuck. I can’t judge how important a factor this was in voting. A US based political scientist who has reasonable UK contacts thinks it was significant. Readers?

The collapse of the Remain effort. People’s Vote fell apart. The very early “This is our last stand on Brexit….we need to rally out troops” in early editorials didn’t materialize. Perhaps it was the lack of a suitable party champion. Visibly conflicted Labour wasn’t it despite Corbyn’s lame two referendum pitch to them. And the LibDems had limited appeal as Tories lite, made worse by overplaying their hand (ruling a coalition with Labour).

The reason the lack of an effective Remain effort matters is it would made it difficult to get away with mere Brexit grandiosity. The more Johnson was called out on his Brexit schemes, the more questionable voting for him (or staying home rather than making a tactical vote)might have seemed.

One downside of this victory is it is likely to stoke Johnson’s and the Tories’ worst tendencies, which is to continue to overplay their hand, as if their mandate matters to the EU. Sir Ivan Rogers’ latest warning looks even more probable, that Johnson will feel invested in his promise to leave by the end of 2020, which is an impossible timetable for a trade deal save a very thin one, and not credible for a more complex services pact. Recall that Sir Ivan anticipated that the UK side wouldn’t realize it was in negotiating trouble, both from a timing and potentially even a fundamental perspective (he thought it was possible talks could break down). Even though the UK could extend the transition period once, for one or two additional years, that needs to be invoked before July 1, 2020. Rogers believes the UK will remain in denial until too late.

So expect a continued wild Brexit ride, although things will probably look artificially calm though the first few months of the year, and potentially as long as the late spring. But don’t expect a happy ending.