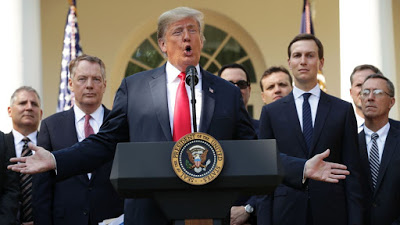 If Trump gets re-elected, if Big Tech continues to evade accountability, if imperial adventures continue abroad, if migrant farmworkers cannot feed their families, you can trace it back to this Tuesday, and the actions a House Speaker took while nobody was paying attention.
—David Dayen, The American Prospect (emphasis added)

As the Impeachment Drama lumbers to a 2020 conclusion, morphing into its variant selves and sucking life from every other story the media most folks attend to are inclined to tell, unwatched things are happening in its shadow.

Nancy Pelosi has used end-of-year urgency and the impeachment distraction to pass four pieces of major legislation, three of which will become law, all on the same day.

NAFTA 2.0 is one of them. Richard Trumka, head of the AFL-CIO, agreed under pressure to approve Pelosi’s House version of NAFTA 2.0, rebranded “USMCA,” or United States-Mexico-Canada Agreement, for obvious reasons. This is a deal he should never have made, yet he made it.

Consider who Trumka is — a bridge between the neoliberal mainstream of the Democratic Party and the (presumably further left) labor movement that supports and sustains it. In other words, he’s the person who blesses neoliberal policies as “progressive” (thus retaining mainstream Democratic Party approval) while modifying those policies in the margins to be less terrible (thus retaining the approval of progressives, who want to think of him as opposed to neoliberalist policies).

To anyone with two cells in their brain, it was obvious as soon as the question was asked that he would approve USMCA. The stage was set; his arrival on it announced; the spotlight was ready and bright. Would he really walk onto this stage at this late date and say no to Party leaders? Of course not.

Would he have been able to stay in his lofty perch if he had? His job was to bless the cake after it had been baked, not to unbake it.

What pressure was Trumka under? First, obviously, from the Democratic Party and its billionaire donors, to give them what they and the Republicans — and Donald Trump — all wanted, a neoliberal-lite trade deal that could become in Nancy Pelosi’s words “a template for future trade agreements … a good template.”

Second, Trumka was under pressure from his union base itself (so say some, including David Dayen in the piece linked below), many of whom are Trump supporters, to give President Trump a signature first-term victory, just in time for the start of his second-term campaign.

Do I believe this latter explanation? No, but I believe Trumka believes it. And if indeed it is true that Trumka has to serve Trump, at least in part, in order to serve his own base, it’s further evidence of the careerism of his actions, in contrast to behavior from actual labor-movement principles.

Pelosi got AFL-CIO president Rich Trumka to sign off on the U.S.–Mexico-Canada Agreement (USMCA), handing Trump a political victory on one of his signature issues. Predictably, White House Press Secretary Stephanie Grisham immediately gushed, calling USMCA “the biggest and best trade agreement in the history of the world.”

It’s, um, not that. Economically, USMCA is a nothingburger; even the most rose-colored analysis with doubtful assumptions built in shows GDP growth of only 0.06 percent per year. There’s one good provision: the elimination of the investor-state dispute settlement (ISDS) provision that allowed corporations to sue governments in secret tribunals over trade violations. There’s one bad provision: the extension of legal immunity for tech platforms over user-generated content, put into a trade deal for the first time. This will make the immunity shield, codified in Section 230 of the Communications Decency Act, much harder to alter in the future. Pelosi has called this deal a “template” for future agreements, though trade reformers have called it a bare minimum floor.

Pelosi tried to remove the immunity shield, but abandoned the request. She did succeed in removing a provision for Big Pharmathat extended exclusivity periods for biologics. The Sierra Club has termed the deal an “environmental failure” that will not have binding standards on clean air and water or climate goals. But the threshold question on the USMCA was always going to be labor enforcement: would the labor laws imposed on Mexico hold, improving their lot while giving U.S. manufacturing workers a chance to compete? There was also the open question of why the U.S. would reward Mexico with a trade deal update when trade unionists in the country continue to be kidnapped and killed.

In his statement, Trumka lauds the labor enforcement, noting provisions that make it easier to prove violations (including violence against workers), rules of evidence for disputes, and inspections of Mexican facilities, a key win. But I’ve been told that the AFL-CIO did not see the details of the text before signing off, which is unforgivable, especially on trade where details matter. There was no vote by union leaders, just a briefing from the AFL-CIO.

At least one union, the Machinists, remains opposed, and others were noncommittal until they see text. The Economic Policy Institute, which is strongly tied to labor, called the agreement “weak tea at best,” a tiny advance on the status quo that will not reverse decades of outsourcing of U.S. jobs.

Meanwhile, back at the Trump re-election ranch:

While the economics are negligible (and potentially harmful on tech policy), on the politics activists are losing their mind at the prospect of a Trump signing ceremony, with labor by his side, on a deal that he will construe as keeping promises to Midwest voters. “Any corporate Democrat who pushed to get this agreement passed that thinks Donald Trump is going to share the credit for those improvements is dangerously gullible,” said Yvette Simpson, CEO of Democracy for America, in a statement. Only a small handful of Democratic centrists were pushing for a USMCA vote, based mostly on the idea that they had to “do something” to show that they could get things done in Congress. Now they’ve got it, and they’ll have to live with the consequences.

I guess helping re-elect the “most dangerous president ever” pales in comparison to passing bipartisan-approved neoliberal trade deals.

One of Richard Trumka’s jobs, if he wants to stay employed, is to make sure neoliberal Party leaders like Nancy Pelosi are happy and well served while simultaneously keeping progressives thinking that Big Labor is still in their corner even on issues the donor class most cares about.

At that he does very well, and did so here.