Yves. All that AI looks dressed up with no where to go….as least in terms of delivering economic goodies.

In all seriousness, I can see issues with deploying AI despite all the gee whizzery surrounding it. The fact that any trained AI is a black box means the only way to test it is to look at how it performs with new inputs….and you have the risk that you haven’t fed it inputs that will lead it to produce anomalies. So how do you know if you’ve tested it adequately, particularly if your organization will be liable if it doesn’t behave well on some types of inputs? It sure won’t look good before a jury when you have to admit you don’t understand how your AI does what it does.

Another factor is that what AI is particularly good at, improving surveillance, does not enhance productivity despite fond managerial/policing beliefs that it does, and may actually diminish it by reducing trust.

In a classic case of synchronicity, a new story at Kaiser Health News raises doubts about AI in medicine, another field where it’s been touted as able to replace clinical judgment on a widespread basis. I recommend reading the article in full. A key section:

Early experiments in AI provide a reason for caution, said Mildred Cho, a professor of pediatrics at Stanford’s Center for Biomedical Ethics.

Systems developed in one hospital often flop when deployed in a different facility, Cho said. Software used in the care of millions of Americanshas been shown to discriminate against minorities. And AI systems sometimes learn to make predictions based on factors that have less to do with disease than the brand of MRI machineused, the time a blood test is takenor whether a patient was visited by a chaplain. In one case, AI software incorrectly concluded that people with pneumonia were less likely to die if they had asthma― an error that could have led doctors to deprive asthma patients of the extra care they need.

“It’s only a matter of time before something like this leads to a serious health problem,” said Dr. Steven Nissen, chairman of cardiology at the Cleveland Clinic.

Medical AI, which pulled in $1.6 billion in venture capital funding in the third quarter alone, is “nearly at the peak of inflated expectations,” concluded a July report from the research company Gartner. “As the reality gets tested, there will likely be a rough slide into the trough of disillusionment.”

By Georgios Petropoulos, a resident fellow at Bruegel and a Marie Curie Skłodowska Research Fellow at MIT and post-doctoral fellow at the MIT Initiative on the Digital Economy. Originally published at Bruegel

Our economy is undergoing tremendous digitalisation through numerous new information technology systems that are based on artificial intelligence and machine learning. While these new technologies bring big efficiency gains in the production process, they do not seem to contribute to productivity, according to the statistics.

AI systems, based on a neural network structure (see, Petropoulos, 2017) have advanced and made impressive accuracy gains in perception, analysis and classification tasks. An indicative example is the General Language Understanding Evaluation Benchmark, or GLUE (see the AI Index 2019 Report): GLUE tests single AI systems on nine distinct tasks in an attempt to measure the general text-processing performance of AI systems. Tremendous progress has been made in the accuracy of these systems over the last year.  Though the benchmark was only released in May 2018, the performance of submitted systems surpassed non-expert human performance in June 2019 and it continues increasing further.

At the same time, global productivity growth, which measures the efficiency in the production process, how much input is needed for the production of a given output, has stagnated over the past decade in advanced economies. Szczepanski (2018) relying on data from the Conference Board provide some baseline statistics to start with. 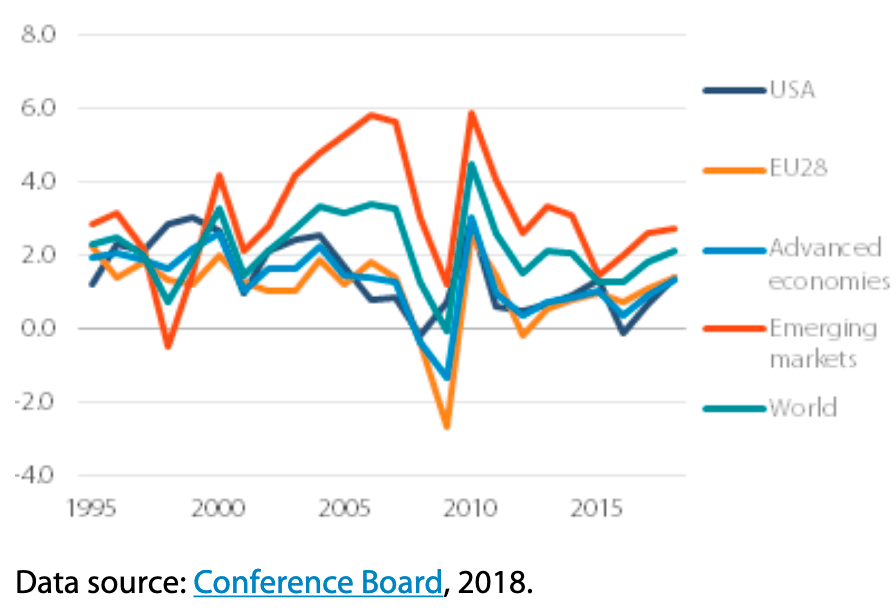 With the exception of developing countries, Figure 1 reports that major economies like the US and the EU28 exhibit similar trends that point towards stagnation during the last decade. U.S. productivity growthwas on average only 1.3% per year from 2005 to 2016, less than half of the 2.8% annual growth rate realised from 1995 to 2004. The EU was affected by the crisis more severely in terms of labour productivity growth, but through it recovered to US levels in 2018. The comparison between the periods 1995-2004 and 2005-2018 illustrates that both economies experience much lower efficiency gains in their production from 2005 and onwards. 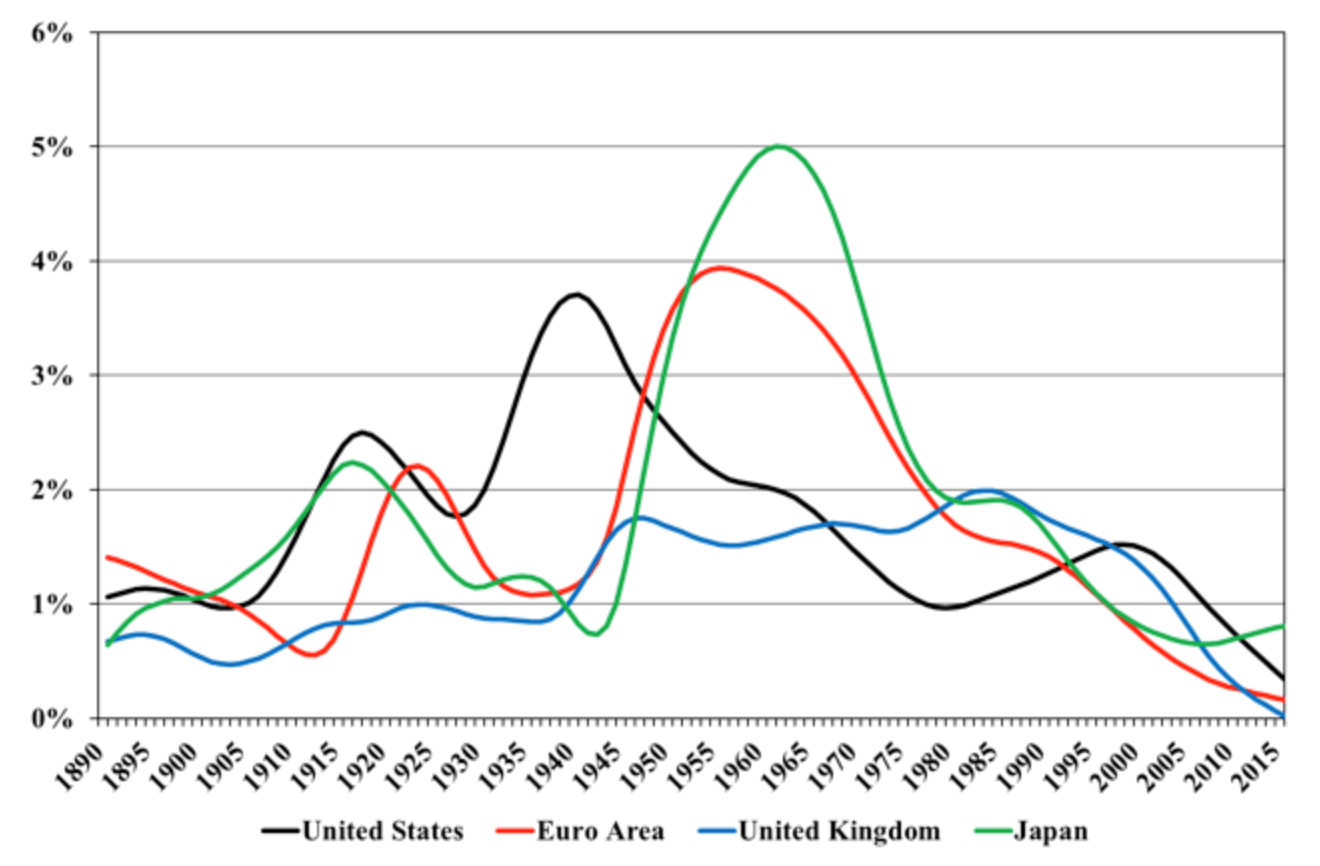 This is the so-called modern productivity paradox, “modern” since the original paradox refers to the rise of computers and information technologies since the early 1980s. For this paradox, four main potential explanations have been proposed by Brynjolfsson, Rock and Syverson, 2017 (see their paper for an extensive discussion over these four proposed potential explanations behind the paradox):

Expectations of AI’s benefits were based on false hopes. According to this rather pessimistic view (in line with the thesis by Robert Gordon) AI cannot bring significant improvements in productivity growth and certainly, its added value is limited when compared with the impact of introducing electricity and combustion engines in the production process. AI contributes only marginally in productivity and this is the reason that its impact is not noticeable in macroeconomic indices. In other words, the productivity paradox is the result of our false hopes that overestimate the benefits of AI. However, going back in time and evaluate revolutionary inventions and technologies of general-purpose by studying their impact on productivity, we conclude that it takes time to “pay-off”. Each of the steam engine, electricity, the internal combustion engine, and computers increased productivity not only directly but also by spurring important complementary innovations. Brynjolfsson et al. (2017) provide some qualitative insights on how this mechanism of complementary innovations can work by using the steam engine as an example: “the steam engine not only helped to pump water from coal mines, its most important initial application but also spurred the invention of more effective factory machinery and new forms of transportation like steamships and railroads. In turn, these co-inventions helped give rise to innovations in supply chains and mass marketing, to new organisations with hundreds of thousands of employees, and even to seemingly unrelated innovations like standard time, which was needed to manage railroad schedules.”

The productivity benefits of the AI technologies are already being enjoyed but have yet to be accurately measured. So, even if AI contributes significantly to productivity growth, this contribution is not captured by statistics and therefore, productivity growth should be higher than the one depicted by statistics. Hal Varian, the chief economist at Google illustrates that through the following example: “in 2000, there were 80 billion photos produced. We know that because there were only three companies that produced film. And fast-forward to 2015, there are about 1.6 trillion photos produced. Back in 2000, photos cost about 50 cents apiece. Now they cost zero a piece essentially. So any ordinary person would say, wow, what a fantastic increase in productivity, because we’ve got a huge amount of more output and we’ve got a much, much lower cost. But if we go look at that from the GDP lens, it doesn’t show up in GDP for the most part because those photos are typically traded among friends and put in albums and things like that. They’re not sold on the market. GDP is the market value of transactions out there, and anything that’s not sold or has a zero price isn’t going to show up in GDP.”

On the one hand, Brynjolfsson and Collins (2019) argue that free online goods can have significant value for users, with WhatsApp being one of the online services that users do not want to give up, even if they are offered a high monetary amount to do that (see the presentation of the paper at Bruegel). On the other hand, Ahmad, Ribarsky and Reinsdorf (2017) conclude that even if mismeasurement is occurring, its scale is not sufficient to explain the widespread slowdown in measured GDP growth and productivity growth. So, we should look towards other potential explanations.

While AI provides significant efficiency gains, they only benefit a few big firms leaving the utility of the rest of market participants unchanged. So, their effect on average productivity growth is modest overall, and with no effect for the median worker. The few big firms can improve their efficiency through AI and become even bigger by increasing the gap between themselves and their competitors. That reduce the industry-wide incentives for innovation that could increase productivity.

Indeed, empirical evidence suggests that: i) productivity differences between frontier firms with their industry competitors is increasing (Andrews, Criscuolo, and Gal, 2016); ii) industries constantly become more concentrated with important welfare losses (Gutierrez and Philippon, 2017, De Loecker and Eechout, 2017), while a small number of superstar firms see its market share to be increasing (Autor et al. 2019). At the same time, Furman and Orszag (2015) find a link between rents and inequality which may have adverse effects on economic growth. It is therefore important to innovate in terms of policy intervention, with a framework of rules and an effective competition policy approach so that we can eliminate the economic risks on productivity from the one-sided fat tail in the distribution of the AI benefits.

And finally, there may simply be a lag in implementation. AI is a general-purpose technology. For general-purpose technologies, as discussed above and as Brynjolfsson et al. (2017) note, history has proven that while eventually, these technologies transformed how we lived and worked, it a took a long time, decades, for that to happen. Businesses had to be reorganized and adopt these technologies in an effective way, and other complementary technologies had to be created to exploit the breakthroughs. In fact, they proceed to the following observation to support this: They compare labour productivity in two different time periods. The one runs from 1870 to 1940, and it is the era of portable power, from its invention, implementation and diffusion. The other one runs from 1970 and onwards and refers to the era of information technology (IT). They conclude that labour productivity during the portable power era shared remarkably similar patterns with the IT era (Figure 3). In both eras, there was an initial period of roughly a quarter-century of relatively slow productivity growth. Then both eras saw decade-long accelerations in productivity growth, spanning 1915 to 1924 in the portable power era and 1995 to 2004 more recently.

Figure 3: Labor Productivity Growth in the Portable Power and IT Eras 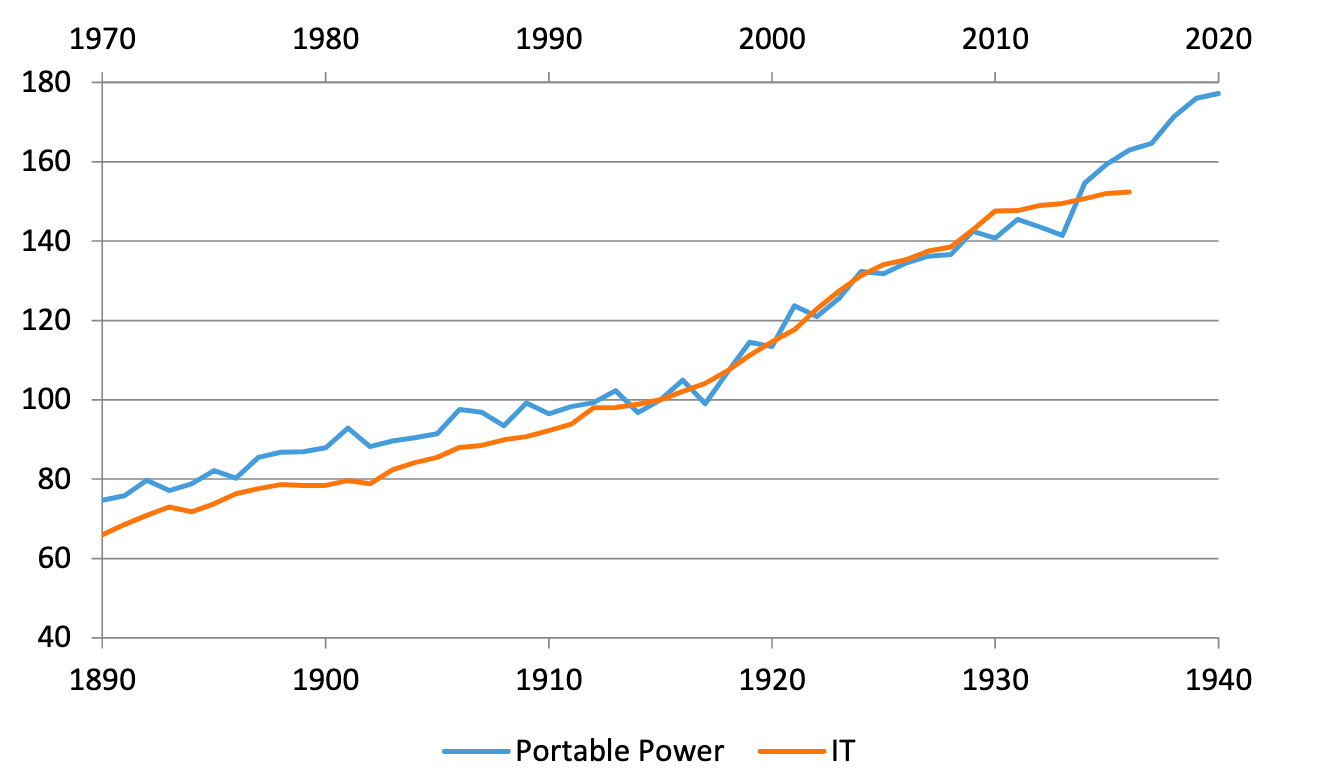 Brynjolfsson et al. (2017) conclude that the last proposed explanation is the most likely to hold. Therefore, we need to wait to see the impact of AI on productivity, when AI will be more developed and more importantly, a series of complementary innovations will be put in place to support its further development and diffusion.

It seems those of us waiting for AI’s contribution to productivity statistics will have to be patient, but in the meantime, we can work for the fair distribution of the benefits of AI. How long we will have to wait to see AI’s impact on productivity is an open question but there are some factors and policy instruments that may help to reach that state quicker:

So, to some extent, the potential of AI, namely, how big the benefits from AI technologies will be and to what degree they will increase productivity is in our hands. Both industry and government should adopt the appropriate actions and strategies that will enable the quick and full realisation of the associated benefits. Otherwise, we could miss out on huge opportunity to harness the power of AI in the decades ahead.