It isn’t yet clear how serious a health threat China’s new coronavirus outbreak will be. The 17 deaths attributed to it so far pales in comparison to annual winter flu mortality. [See update at end: Chinese authorities clearly very worried…and per the theme of the post, do they know more than they are letting on, or is this the public health version of fog of war?]

Note that as of now, the WHO has not declared this coronavirus outbreak to be a global health emergency. But the speed and severity of China’s reaction, taking the unprecedented step of cordoning the city of Wuhan, is enough to lead worry-warts to think officials might know something they haven’t yet ‘fessed up to.

WATCH: Wuhan train station cordoned off as the city of 11 million goes on lockdown to stop the spread of coronavirus pic.twitter.com/nV743GcUBg

Even though Wuhan is a provincial capital, it has a population of 11 million and 600 to 800 daily flights, including direct flights to San Francisco, Tokyo, London, New York, Paris, and Moscow. The Chinese measures are on the order of halting air, train, and other public transport travel from New York City right before Christmas.

Massive lines of people stuck in Wuhan trying to escape the virus outbreak. Flight have been cancelled as China quarantines city pic.twitter.com/xrQXTxjDst

However, the “lockdown” wasn’t absolute:

Private cars and trucks can freely leave Wuhan, drivers and passengers get a temperature check. Vehicles also permitted to drive in. Not currently accurate to describe the city as being "locked down". pic.twitter.com/JAHzXOliJc

But other images suggest that getting out by car is difficult:

And this suggests road exits are being shut down:

#UPDATE: Hubei has begun shutting down highways within the province and Wuhan has started closing highway exits leaving the city. pic.twitter.com/rfQAApbYzQ

Input from readers who can read Chinese and provide more intel would be very much appreciated. For instance, it would be useful to know if other sources confirm that locals are concerned that the travel limits will affect daily life, or if this is what Lambert likes to deride as “Web evidence”:

Purported video of locals fighting over food supplies in Wuhan amid a rush to stock up due to city-wide lockdown https://t.co/uOPXxSQRBl 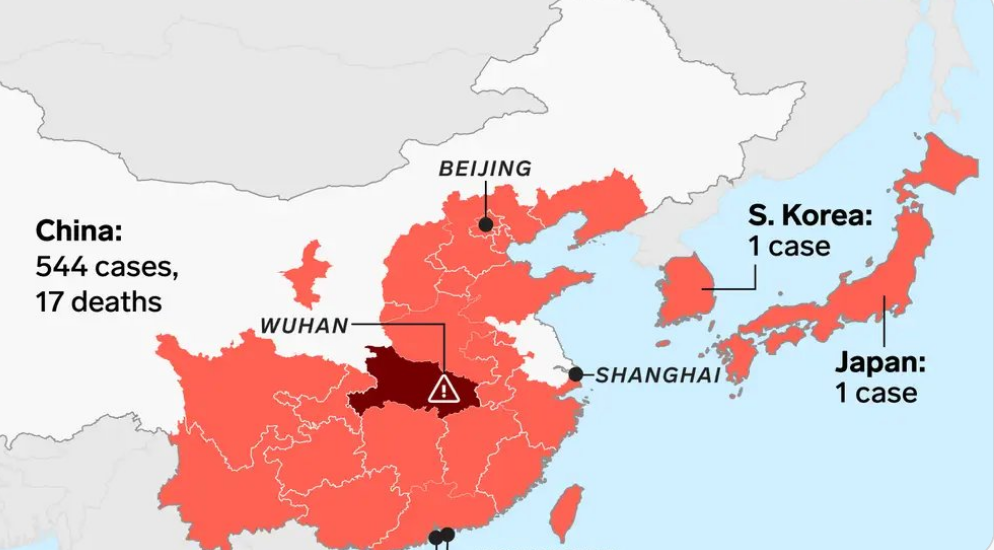 Note the figure of 554 cases is confirmed infections; many press reports now estimate the number of infections as in the thousands. There have also been confirmed cases in the US, Macau, Hong Kong, Taiwan, and Thailand.

This tweet gives more confirmation of the strictness of measures within Wuhan:

An old mother put Chinese New Year's food on the floor in front of her son's house. They can not be together because his son is a doctor fighting in the front line of #Wuhan. The mother said to her son across the door, "take care of yourself, you must take care of yourself ". pic.twitter.com/fi1eJBSC57

Recall that the coronavirus is believed to have started at a market for exotic meat; researchers believe it might have originated with snakes. Chinese don’t like eating formerly frozen meat, so these foods are regularly transported in trucks unfrozen; only the bourgeois shop at stores with refrigerator cases. When I visited Bali in the early 1990s, I was disconcerted by similar norms: local markets, with the food market the big draw and stalls with clothing and crafts on the periphery, with vegetables and (hopefully slaughtered that day nearby) raw chicken parts piled up in baskets in the equatorial heat.

This gives an idea of the much more modern, urban version of that type of market in Wuhan:

Photo from Douban of a menu at #Wuhan Huanan Seafood Market. Don't know when it was taken, but they sell all kinds of wild animals incl. live wolf pups & palm civets. 2nd photo taken after outbreak discovered shows this storefront (3rd left) covering word “野 (wild)” in its name. pic.twitter.com/HiQlzX4XBX

The Chinese response could come out of post mortems of the 2002 SARS (“severe acute respiratory syndrome”) outbreak. I could easily see that if you are dealing with a new disease that has proven itself to be a killer, an aggressive response early on would be a more prudent approach than waiting to have better data about communicability, vulnerability, and infection modes. In other words, the potential for this outbreak to be SARS 2.0 is ample reason for caution. From Wikipedia:

…an outbreak of SARS in southern China caused an eventual 8,098 cases, resulting in 774 deaths reported in 37 countries, with the majority of cases in China and Hong Kong (9.6% fatality rate) according to the World Health Organization (WHO). No cases of SARS have been reported worldwide since 2004.

A 10% death rate is enough to focus the mind. And again, based on the data out of China so far, it does not yet appear that this new coronavirus is that lethal.

Nevertheless, Mr. Market didn’t like the look of medics in hazmat suits attending the sick and inspecting planes.

? #Wuhan #coronavirus: #virus originated from an illegal animal market and is believed to have originated from a bat. He has already killed 9 people, there are at least 3000 cases. The authorities fear another change. The China virus is spreading quickly.pic.twitter.com/IRJxiGvw3U

The ban on travel out of Wuhan, a city of 11 million, triggered a drop in the Shanghai index of 2% and Hong Kong, 3%. The Nikkei and the ASE also fell.

Bloomberg has some detail on the fatalities:

At least nine victims had pre-existing conditions such as diabetes, coronary artery disease and Parkinson’s disease, the National Health Commission said. Eight were aged 80 or over, two were in their seventies, five in their sixties and one in his fifties. The youngest was a 48-year-old woman with a pre-existing condition. Four of the victims were women and the rest were men.

One expert thinks the extent of this coronovirus spread could be much worse than SARS. From Shanghaiist:

In an interview with Caixin, Guan Yi, a Hong Kong University professor specializing in infectious diseases, feared that the scale of the Wuhan virus may be 10 times greater than that of SARS, adding that the situation left him feeling “powerless.”

”I’ve experienced so much. I’ve never felt scared, most of them are controllable, but this time, I’m scared,” he told the news outlet on Thursday in regards to his recent trip to Wuhan to help discern the source of the virus.

Arriving in the city on January 21, Guan was critical of what he saw there including the alarming uncleanliness of local wet markets and the airport, even as the city was on high alert. After only a day in Wuhan, he decided that he needed to get out. He has since put himself into isolation.

When asked for his opinion, Guan was skeptical about how much good the Wuhan lockdown would do, noting that many residents had already left the city for the Spring Festival holiday and that the optimal time for quarantine had already passed.

He also explained that this new virus may prove more difficult to trace than SARS, which was chiefly transmitted by so-called “superspreaders.” So far, health authorities haven’t been able to trace the spread of the virus.

Some of the people who died did not exhibit a fever. This is particularly troubling since it would make it well nigh impossible to determine who has been infected. Again from Bloomberg:

Several people who’ve died from a new virus in China didn’t display symptoms of fever, potentially complicating global efforts to check for infected travelers as they arrive at airports and other travel hubs.

Details released by China’s National Health Commission show five of the 17 people who died after being infected with novel coronavirus displayed other symptoms such as breathing difficulty, chest tightness and coughing. The joint-oldest victim, an 89-year-old male, was suffering from drowsiness and incontinence, as well as a fever. He sought medical help on Jan. 5 and died on Jan. 18. He had pre-existing conditions, including hypertension.

There are rumors of new cases in Hong Kong (note one has been confirmed so far):

And the greater extent of air travel in and out of China greatly increases the risk if this coronavirus proves to be as deadly as SARS:

Comparing #Wuhan virus to #SARS, you have to keep in mind that air traffic within and out of China has SOARED since 2003, and this could be decisive vector of its spread. pic.twitter.com/4V4FcOk0MH

However, Chinese officials really are not messing around:

My cousin in Shanghai sent me this video. Apparently this happened today: a traveller with high fever from Wuhan went straight into a quarantine cage.#WuhanCoronavirus pic.twitter.com/NtFoeHpRTn

But what about people with no fever in China and abroad?

Update 6:00 AM: Via a Wall Street Journal news alert:

On Thursday, authorities in Huanggang—a city of 7.5 million people—said they won’t let long-distance trains and buses run from the urban center and will shut its public transportation system in the lockdown zone, effective midnight Friday local time. Ezhou, another neighboring city with just over a million residents, said it would enact similar restrictions.

Huanggang is about 35 miles east of Wuhan, a city of 11 million and a major hub for travel, where the new pneumonia-causing coronavirus originated. Wuhan just hours earlier halted outbound trains and flights and shut down its public-transportation system.

The Huanggang local government also said movie theaters, internet cafes and other entertainment and cultural facilities in the city center would temporarily halt operations and a central market would be shut down for an indefinite period.

Starting Thursday, the local government said it would inspect every person and car entering and exiting the urban center.

The new restrictions and shutdowns effectively represent a doubling down by Chinese authorities of a high-stakes strategy that experts describe as an untested approach to dealing with infectious diseases.

The BBC is running a live blog.