Yves here. Who dreamed up this crazy process? I thought Iowa citizens were straightforward types. 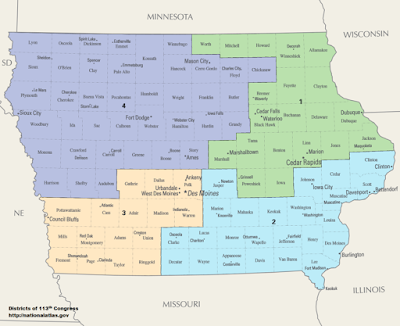 Most people think, innocently enough, that the coming Democratic Party Iowa caucuses held in each of the state’s voting precincts selects pledged delegates to the national convention.

All of this layering, despite its indirectness, is nonetheless intended to produce a national delegate mix that roughly approximates the vote ratios at the precinct caucuses — “roughly” because of rounding rules. Are there unfortunate consequences to this indirectness? Yes, and they could be considerable.

Iowa Delegates, What Kind and How Many

Let’s start with the pledged delegate allocations themselves, then look at the process in more detail. For a source we’ll use an excellent if weedy site, The Green Papers, to explain the details. (Here’s the Iowa Democratic Party’s explanation, if you want to look at the ultimate source.)

Iowa, like all states, has been allocated a number of pledged and unpledged delegates by the DNC. Pledged delegates come in three kinds or types: per-district, at-large, and “pledged PLEOs” (party leaders and elected officials).

Starting with per-district pledged delegates: The state has four congressional districts (CD1, CD2, CD3, CD4), each of which, at its district convention, allocates its assigned delegates based on viable candidates’ performance at the precinct caucuses in that district.

“Viable” means that a candidate has received at least 15% or more of the caucus vote in a precinct (but see explanation and example below; the viability threshold changes depending on the number of pledged delegates available in a precinct’s district). Any candidate who receives less than the viability minimum of caucus votes for that precinct’s district gets no delegates.

In addition, the DNC has granted Iowa Democrats a number of at-large or state-wide pledged delegates, which are allocated at the state convention to viable candidates based on their performance in the precinct caucuses.

Finally, Iowa Democrats have been granted a number of pledged PLEO (“party leader and elected official”) delegates who are also allocated at the state convention — again, according to viable candidates’ performance at precinct caucuses.

In Iowa’s case, the pledged delegate allocations are as follows:

In top of all of that, the state has been granted eight unpledged PLEO delegates — these are the so-called superdelegates — for a grand total of 49 delegates to the national convention.

How Iowa Delegates Are Chosen

Here’s a more detailed look at the selection process for the pledged delegates from The Green Papers (emphasis and some reparagraphing mine). Note how many layers it contains and how byzantine the process is.

Democratic Party Caucuses meet in each precinct at 7 PM CST. Absentee or proxy voting is not allowed. Each Precinct Caucus chooses the precinct’s delegates to the County Conventions based on presidential preference. …

To determine the viability of a presidential contender, multiply the number of eligible caucus attendees by the percentages below and round to the nearest whole number. This is the minimum number of delegates needed for the contender to remain viable.

The caucus will next choose the precinct’s delegates to who will be allocated in proportion to the percentage of the support each “viable” presidential contender received in the second round of balloting at the precinct caucus as of the time of its adjournment.

National Convention delegates are allocated from the state delegate equivalency results of the precinct caucuses. …

Saturday 21 March 2020: County Conventions convene in each county to choose Congressional District delegates of which the county is a part as well as the county’s delegates the Iowa State Democratic Convention.

Saturday 25 April 2020: Democratic Party District Conventions convene in each congressional district at 9:00am to elect the district’s delegates to the Democratic National Convention according to the results of the precinct caucuses.

This accounts for the congressional district delegates. Now for the selection of pledged at-large delegates and pledged “party leaders and elected officials” (PLEOs):

Saturday 13 June 2020: The Iowa State Democratic Convention convenes at 9am CDT. The State Convention elects the 9 At-Large and 5 PLEO of the Iowa’s Pledged delegates to the Democratic National Convention according to the results of the precinct caucuses.

Finally, this is the makeup of the group of Iowa’s unpledged or superdelegates:

These 8 delegates … will go to the Democratic National Convention officially “Unpledged”.

How to View the Delegate Selection System

I offer three takeaways from this look at the selection process.

First, in an honestly run election the process will indeed, at each stage, allocate pledged delegates “according to the results of the precinct caucuses” as required by the rules — allowing for very small differences due to rounding.

Second, because the entire selection process isn’t over until after the June 13 Iowa state convention, those small differences can (and most likely will) be reported intermittently as adjusted per-candidate delegate totals. That is, a candidate may be reported as having X number of delegates on caucus night, but actually receive a slight different number by the time the state convention is held.

Third, because of the many layers…

…the people chosen as delegates by the precincts are unlikely all to be the people who vigorously represent the candidates at the national convention. (This will almost certainly be true of many of the “pledged PLEOs.”) Instead, national convention delegates are just as likely to be people who have been most deeply involved with the Democratic Party for the longest time and have simply promised to vote a certain way on round one. This is not just true of Iowa pledged delegates, by the way, but to all of them.

Which means that at the national convention, a Sanders or Warren or Biden pledged delegate may not in fact be a Sanders or Warren or Biden loyalist. In many cases, that delegate may just be a state party official or loyal party functionary who’s being rewarded for their service with a nice, perhaps pre-paid, trip to the week-long party (in both senses) event in Milwaukee.

What Will the Democratic Party Do On the Second Round of Convention Voting?

Keep all this in mind as you game out the results of a second round of voting in Milwaukee, when all delegates who were “pledged” on the first round, become decidedly unpledged on all subsequent rounds. The opportunities for second-round mischief are many.

On the second round of voting, and on each round afterwards, the entire convention is composed of unpledged delegates, many of them merely state party loyalists, each free to vote as they choose. The aggregated response of the Party to that second-round freedom may well define the Party in the eyes of voters for the next generation.

And the response of voters to the way the Party exercises that freedom may well define the Party’s future, or lack of it, as well. After all, if primary voters select one of the revolutionary candidates by a solid plurality, and at the convention the Party denies that candidate the nomination, the Party itself may not survive the voter revolt against it in the battle to unseat Donald Trump.

Could the Democratic Party actually Whigify itself in 2020? It seems unlikely given the many advantages secured by the bipartisan duopoly.

But do stay tuned. These are epic times, when even the almost unthinkable of outcomes is entirely possible.