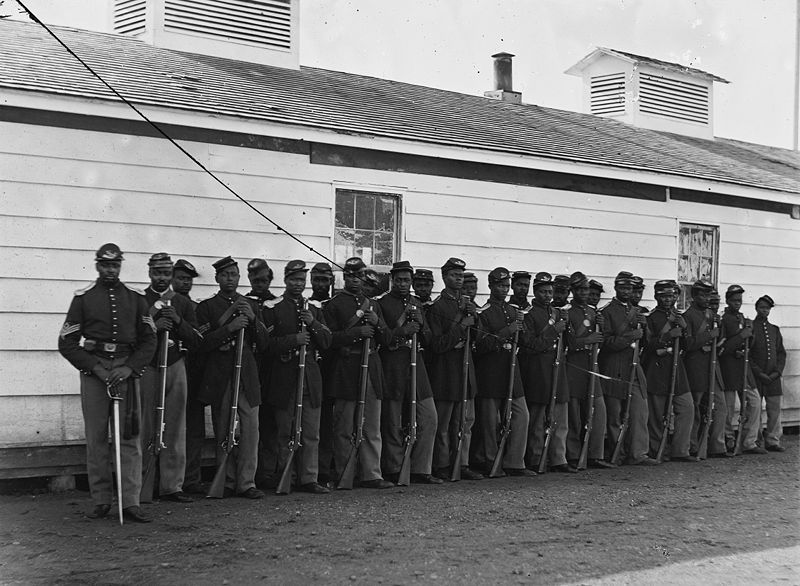 In this paper, we combine white and black economic histories of the United States from its formation to the present.

The Constitutional compromises between slave and free states set the stage for rapid economic growth as cotton from Southern slave states provided the raw material for the emerging cotton industry in the North. The cooperation between states also set up tensions that intensified over time as the addition of new states reiterated the Constitutional compromise over and over again with increasing acrimony.

This tension led to the Civil War that brought with it the 13th Amendment freeing slaves. But Reconstruction after the war proved to be only a temporary reprieve for African Americans. Despite all the carnage and death in the Civil War, gains for African Americans proved highly elusive. President Grant did what he could as Congress increasingly lost interest in the progress of democracy in the post-war South. Isolated opposition to black office-holders showed itself in violence and murder and formed a pattern of opposition to the Federal troops enforcing Reconstruction. The 1876 election was very close, and the Republican candidate was allowed to take the office by promising to remove Federal troops from the South, ending Reconstruction.

The fortunes of the South and West then diverged as the cotton industry was replaced as a center of economic growth by growing manufacturing, mining and wheat exports. Racial violence that had grown during Reconstruction increased after its end. The Supreme Court invalidated the 14th Amendment as it applied to local violence in the 1880s, and blacks were trapped in a stagnant agricultural setting without education or votes to alleviate their lot. Their conditions deteriorated as the South stagnated and Jim Crow Laws proliferated, while the North leapt ahead with the settlement of the West.

White Americans became the industrial leaders and dominant country through world wars and a world-wide depression in the first half of the 20th century. The peace treaty after the First World War led to the Second World War as the Constitutional compromise led to the Civil War. Black American families peacefully moved North and West through this aggregate turbulence. Whites obscured the racial divergence by using a new technology to project their hostility and violence onto blacks in The Birth of a Nation.

The Second World War ended with an unconditional surrender, and the western world enjoyed thirty years of robust growth. However, blacks moving North in the Great Migration were largely prevented from sharing in these gains by their exclusion from many of the GI bills’ provisions, their inability to move to the new suburbs, and white flight from cities where blacks moved in.

The Civil Rights Movement started with the desegregation of the armed forces and education in 1948 and 1954. It continued with President Johnson’s Great Society. Educated blacks were included in the growth of the white economy, while working-class blacks found that doors were closed to them as growth slowed. This echo of Reconstruction ended badly as urban riots spread in newly black cities around the country in the late 1960s. As after the Civil War, this “second Reconstruction” was met by the determination of the white population to refuse most African Americans full integration into the American economy.

Average wages ceased to grow around 1970 as conservative politicians came forward to erase gains blacks had made in the Civil Rights Movement. The Great Migration ceased as Northern jobs suffered, and mass incarceration began to separate blacks from whites. One in three black men was incarcerated by the end of the 20th century, making modern prisons into a New Jim Crow. Prisons now separate blacks and whites the way Jim Crow laws did in the previous Gilded Age even though state prisons contain more poor whites than blacks.

The middle class lost ground as unskilled and semi-skilled jobs became scarce. The distribution of income became wider, and rich people supported a rollback of the social services introduced in postwar prosperity. Their influence was increased by a Supreme Court opinion that gave money a free hand in politics in 2010. And the Supreme Court gutted the 1965 Voting Rights Act in 2013, sending us back to a voting order echoing the original Jim Crow. As in the 1880s, the Supreme Court withdrew the legal foundations of an inclusive American society only a few years after they were passed.

The net result of this second attempt at racial integration was that educated African Americans are now accepted in white society—one even was elected President—while the mass of black Americans are deprived of economic opportunities and votes.