Yves here. I am sorry to be thin with my own material. Fortunately Lambert and Jerri have lots happening on their beats and have been providing meaty posts.

We’ve had to change some of my mother’s staffing (she has part-time help). And I am quite bummed out by the need to Do Something about my joint injuries, since they are not getting better and my mobility is getting slowly worse over time. But I’ve been down this path with less severe problems, and even in New York (and other cities) spent a staggering amount of time and money on conventional and not conventional treatments which were unproductive or only produced very short term benefit. And I don’t know how to find the time or emotional energy to shop for possible solutions. My situation is made worse by the fact that it is pretty clear to me that what I have going on can’t be adequately explained by the damage to a particular joint, and my decades of experience has shown that just about no one is even inclined, much the less any good at looking at more complex interactions or considering whether non-symptomatic structures could be part of the problem. And this is what ought to be simple mechanical systems!

Snow in N. #Saudi Arabia over weekend, just as it was 70 F in Washington DC.

Climate Change Is Killing Alpine Skiing as We Know It Bloomberg

Once AGAIN @BorisJohnson says that his #Brexit deal will mean NO checks for goods travelling from Great Britain to Northern Ireland, if he does a 'zero tariff' deal with he EU – must know that's wrong. Is this just pure cynicism? 1/Thread

EXCLUSIVE: Smiling Meghan Markle visits women’s shelter to ‘boost spirits’ after boarding seaplane in Canada as she is seen for the first time since fleeing the UK – but there’s still no sign of Archie Daily Mail. Limiting myself to the Mail on this, but get a load of the story embedded late in this piece: Markle vs Markle: Meghan’s father is set to be star witness against her in High Court showdown as devastating texts expose their bitter war of words over her wedding. As Lambert said, Disney isn’t going to like this.

Iran and the US are now trading barbs on China’s Weibo amid censorship on other platforms abc.net.au

Google to phase out most invasive internet tracking Financial Times

US Military Spending:Trillions of Dollars Unaccounted For Off-Guardian (JTM)

2020. #WomenforBernie trending big time, along with (much fewer #s) #CNNisTrash

Look at the body language.

Whatever Warren is saying, Bernie isn’t having any of it. I can’t even imagine what he’s feeling right now when someone you considered a close friend betrays you like that.

Poll: Half of voters have already decided against Trump in 2020 NBC

Is a liberal arts education a practical investment or waste of money? You might be surprised. Washington Post

Antidote du jour. Reader Jim D wrote wondering if I had any idea about the disappearance of Dutchsinse from the Web, more fully described here. He also sent a photo of his Precious, who died over seven years ago:

You were kind enough years ago to publish a picture of my cat named Precious, the half Abyssinian, half Manx in NakedCapitalism.com. Precious is the one that knew to stay on the patio concrete and sit outside with me, or sometimes with little or no supervision; but once chased a desert fox away. Precious sat between me and the monitor if I was on the computer … he slept either in my left armpit, or under the covers if I faced the other way. 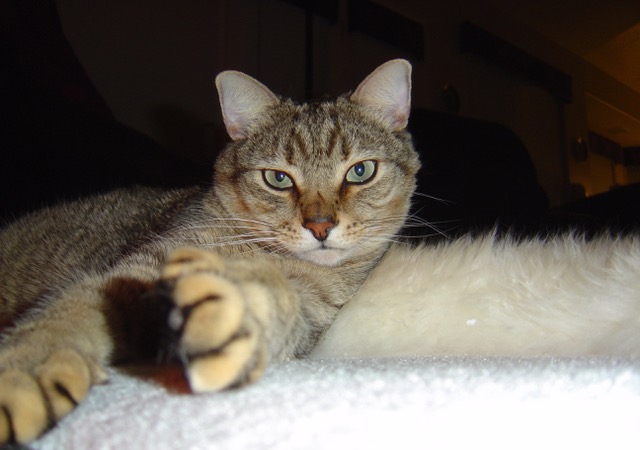