Tesla doesn’t disclose deliveries in the US, unlike other automakers. It only discloses global deliveries. We have to look at other data to see how Tesla is doing in the US; and in the US, deliveries have been plunging in recent months. In California, by far Tesla’s largest market in the US, registrations of new Teslas in the fourth quarter plunged by 46.5% to just 13,584 vehicles, from 25,402 vehicles in the same period in 2018. Model 3 registrations plunged by about half to 10,694 vehicles.

This is based on DMV registration data, compiled by automotive registration-data provider Dominion Cross-Sell, cited by Reuters.

The reason commonly mentioned for the plunge in sales in the US in recent months is the phase-out of the $7,500 federal tax credit in 2019 for Tesla’s vehicles. In Q1 2019, the federal tax credit fell to $3,750; in Q3, it fell to $1,875. And as of January 1, this year, it’s gone completely, though some state incentives are still available. In response, Tesla cut prices and came out with cheaper versions of its models, but to no avail.

The other and more troubling theory is that most people who had always wanted a Tesla and had waited for years in the deposit-line to get their Tesla, now have their Tesla, and the “pent-up” demand has been filled, and Tesla would have to get down and dirty and sell cars the hard way.

Instead of trying to slug it out in the declining US market, where its market share is just 1.3%, and watch its unsold vehicle inventory pile up, Tesla then chose to ship its US production to other countries. Makes sense. But soon those markets will be saturated too by the pricy niche-vehicles, and then the issue is how to go forward?

So Tesla decided to seek salvation in China in a big way, like GM had already done over decade ago.

Step 1: Built and Funded in China.

Tesla built its “Gigafactory” in Shanghai. Like all buildings in China, the factory sits on land that belongs to the state and is leased from the state. The factory was funded mostly by loans from a consortium of Chinese state-owned lenders. The last package of loans totaled $1.63 billion, according to Tesla’s filing with the SEC in late December.

The funds may be drawn in Chinese yuan or in US dollars. The package comes in two parts:

Now Tesla plans to open a design and research center in China to design “Chinese-style” vehicles, according to a recruitment notice that was posted on Tesla’s official WeChat account  on Wednesday and reported by Reuters. According to the notice, Tesla wants to recruit designers and other staff for the design and research center. The deadline for submitting applications is February 1.

In order to achieve a shift of “Made in China” to “Designed in China,” Tesla’s CEO Elon Musk has proposed a very cool thing — set up a design and research center in China.

Tesla has not announced the location of the design and research center, nor when it expects it to open its doors.

Tesla’s market share in China, the largest market in the world, is essentially 0%. The Model 3 is a car, as in “sedan,” not an SUV, and cars have gotten tangled up in Carmageddon, even in China.

In the US, “car” (sedan) sales have collapsed by 40% from their recent peak in 2014, as consumers switched to SUVs, compact SUVs, and trucks, whose sales have soared. The idea for the Model 3 – a smaller less expensive version of the Model S – was hatched before the Financial Crisis. But now this is what the Model 3 is up against in the US – with the Model 3 being part of the red line: 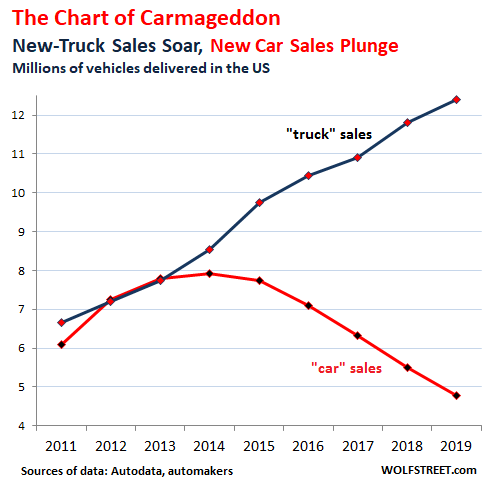 Similar patterns are playing out around the globe, including in China. Tesla is countering this trend with hopes that its future compact SUV, the Model Y, when it will be finally available for sale, will have better luck than its immensely ill-timed – at least five years too late – Model 3.

In China, there is another thing: When the idea of the Shanghai factory was hatched, China was still piling huge incentives on EVs, and the EV market was booming. But China has now curtailed the incentives, and suddenly, beginning in July last year, the boom in EV sales fizzled.

And in China, there are hundreds of EV makers. Every global brand is now building EVs in China for the Chinese market, from the top luxury brands on down. For the first time ever, Tesla will face real competition in form of a full range of models of EVs that have been mass-produced by global automakers.

In addition, passenger-vehicle sales in China fell nearly 10% in 2019, the second year in row of declines, as the market, that had been booming for three decades, is retrenching.

On the positive side of the ledger: In China, luxury still sells, and the luxury brands had growing sales in 2019. But they too are now all coming out with EVs, not just cars but a broad range of SUVs and compact SUVs, and these automakers know how to get down and dirty and slug it out in a touch market. So Tesla’s shift to China might not be quite the entry into automotive nirvana.