Jerri-Lynn here. I’ve previously crossposted many segments of Justin Mikulka’s excellent series for DeSmogBlog on fracking follies. Here’s Wolf Richter’s take on the issue, wrapped up with a discussion of collapsing prices for oil and natural gas.

Following the sharp re-drop in oil and natural gas prices in late 2018, bankruptcy filings in the US by already weakened exploration and production companies , oilfield services companies, and “midstream” companies (they gather, transport, process, or store oil and natural gas) jumped by 51% in 2019, to 65 filings, according to data compiled by law firm Haynes and Boone. This brought the total of the Great American Shale Oil & Gas Bust since 2015 in these three sectors to 402 bankruptcy filings. 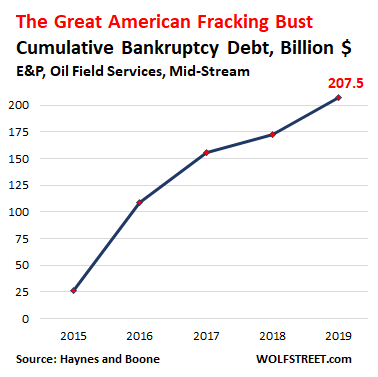 But this does not include the much larger losses suffered by shareholders that get mostly wiped out in the years before the bankruptcy as the shares descend into worthlessness, and that then may get finished off in bankruptcy court.

The banks, which generally had the best collateral, took the smallest losses; bondholders took bigger losses, with unsecured bondholders taking the biggest losses. Some of them lost most of their investment; others got high-and-tight haircuts; others held debt that was converted to equity in the restructured companies, some of which soon became worthless again when the company filed for bankruptcy a second time. The old shareholders took the biggest losses.

Two major geopolitical events in the Middle East – the attack on Saudi Aramco’s oil facilities last September and the US assassination of Iranian Major General Qasem Soleimani – that would have shaken up oil markets before, only caused brief ripples, quickly squashed by the onslaught of surging US production. At the moment, WTI trades at $56.08 per barrel, which is still below where the shale oil industry can survive long-term: 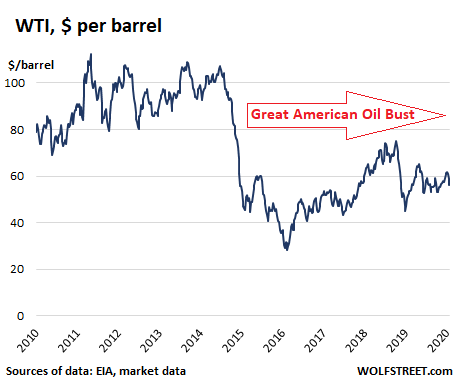 And 2020 is starting out terrible for natural gas producers. The price of natural gas has plunged to $1.90 per million Btu at the moment, a dreadfully low price where no one can make any money. Producers in shale fields that produce mostly gas, such as the Marcellus, are in deeper trouble still, because oil, even at these prices, would be a lot better than just natural gas.

Producing areas with constrained takeaway capacity (it takes a lot longer to build pipelines than to ramp up production) are subject to local prices, which can be lower still. In some areas, such as the Permian in Texas and New Mexico, the most prolific oil field in the US, where natural gas is a byproduct of oil production, limited takeaway capacity has caused local prices to collapse, and flaring to surge.

The chart shows the spot price for delivery at the Henry Hub: 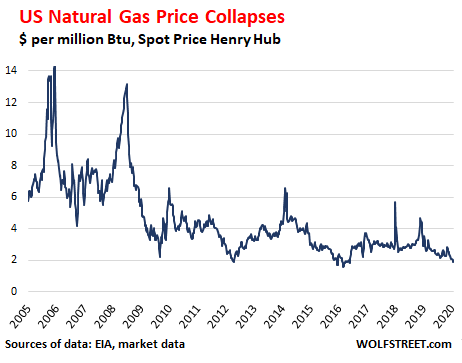 Texas at the Epicenter.

Delaware, obviously, is not into oil and gas production, but into coddling corporations, and many companies are incorporated in Delaware, including some oil-and-gas companies in Texas. When they file for bankruptcy, they do so in Delaware. These are the eight states with the most oil-and-gas bankruptcy filings since 2015: 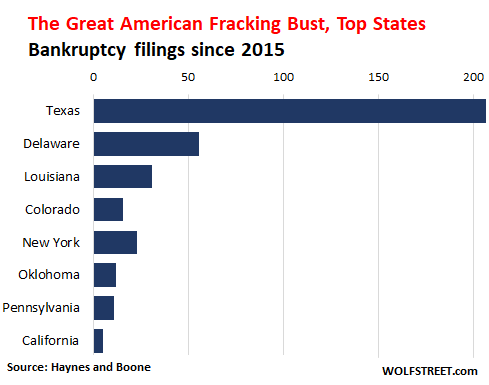 Bankruptcy filings are triggered when the E&P companies no longer get funding from Wall Street or from their banks to continue with their perennially cash-flow negative operations and service their debts. And this is what is happening now. Wall Street and the banks have started to demand that these companies stick to an entirely new mantra in the fracking business: “live within cash flow.”

When E&P companies run short on funding, they cut back on drilling activity which puts the squeeze on oilfield services companies that provide products and services to the oilfield, including drilling and completing wells. And then these OFS companies go bankrupt.

This is what happened to oilfield-services giant Weatherford which filed for a prepackaged bankruptcy last July. Back in 2014, before the oil bust, it had 67,000 employees; by July, it was down to about 26,000. The reorganization plan allowed Weatherford to shed $5.8 billion of its $7.6 billion in long-term debt. Old shareholders got wiped out. The creditors got 99% of the restructured company’s new shares.

In its report on the OFS bankruptcies, Haynes and Boone cited this pressure from Wall Street and its cascading effect, which Weatherford had pointed out in its bankruptcy filing:

We note that Weatherford, in its July 2019 filing, attributed its insolvency in part to reduced drilling activity by producers who have also been dramatically affected by the commodity price slump since 2015. Investors’ pressure on producers to “live within cash flow” is further reducing demand for OFS services and supplies leaving the OFS sector with little near term hope for a turnaround in prospects.

What this sector needs are much higher prices for oil and natural gas. But that cannot happen while production continues to surge. A large-scale culling in the sector – a lot more bankruptcies – could reduce production, and support higher prices.

But as soon as prices rise above certain levels, with investors still chasing yield at every twist and turn, the flood of new money will wash over the sector again, with investors having already forgotten by then that shale oil and gas was where money went to die every time. And this new money will cause a new surge in production, which will collapse prices once again. It’s a cycle that the shale industry has a hard time getting out of, under the current loosey-goosey monetary conditions.