Here is a hasty post on the NH primary results; I’m racing to get this under the wire before putting up a temporary Water Cooler, because I’m sure this is what you want to talk about. As readers know, I’m really fascinated by institutional factors, and so this post will have virtually no focus on the horse race at all (leading to a new version of “hot,” in “hot take” I suppose). In consequence, I’ll focus mostly on the Sanders campaign, because his campaign is the most — the only? — interesting campaign institutionally (except for Bloomberg’s, of course). So to the hot takes:

Here is a table comparing the final polls for Iowa and New Hampshire (left column) with the actual results (right column):

(Please forgive the ugly screen dumps; I write in haste. I like dk’s poll aggregation because it doesn’t have any secret sauce; I don’t care which Nate is right about what). As you can see, in IA the pollsters got neither the order, nor the percentages correct. OK, OK, IA is notoriously tricky. In NH, the pollsters got the order right, but the percentages wrong; they missed Klobuchar’s late surge (based on her debate performance?), and they missed Warren’s collapse. It’s possible that the campaigns have, as it were, the commercial versions, more accurate than those available to the great unwashed. It’s also possible that voters make up their minds at the last minute, particularly in an election year with a large number of candidates and enormous stakes. From the Washington Post:

It’s also roughly double the percentage of New Hampshire voters who decided in the days before the 2016 primary, a contest that had been effectively narrowed to Sanders and Hillary Clinton.

The exit poll, conducted by Edison Media Research for the National Election Pool, The Washington Post and other media organizations, only underscored how undefined and unpredictable the Democratic race has been.

What goes on out there in the biomass is still mysterious. Thank heavens.

(Apologies for the fingerwagging!) Sanders thanks his volunteers:

Sen. Bernie Sanders: "The reason that we won tonight in New Hampshire, we won last week in Iowa, is because of the hard work of so many volunteers." pic.twitter.com/ehl6mTcE90

This is true, as long as we admit that the “work” was carefully structured by what looks like a calm and collected campaign staff. And it’s important to avoid triumphalism in the sense of “coasting” for any given primary, when the field seems to be won:

I mean triumphalism in this sense:

.@berniesanders supporters are chanting “We are unstoppable. Another world is possible.” pic.twitter.com/wYdHUnozZZ

Yes, “another world is possible” (thank heavens). But “we are unstoppable”? One likes to see esprit de corps in the troops, certainly, as well as confidence in one’s own capabilities; but if (as Napoleon did not quite say) every Sanders volunteer carries a Marshall’s baton in their knapsack, then thinking like a Marshall will be important. Elan is not enough when facing machine gun fire. How will an army that believes itself to be “unstoppable” cope with a loss? Say, in South Carolina? Or a horrid war of attrition on the way to the convention? (This is an extremely high level version of “mean Bernie Bros”; I think a lot of the extremely online Sanders supporters are, perhaps, over-confident.)

(3) The Party Establishment Has Defense in Depth

As readers know, I consider the unique institutional characteristic of the Democrat Party to be its control over the ballot supply chain: who gets on it; how it is counted. It’s noteworthy that the Iowa caucus showed how ballot control could be used to the detriment of one candidate; New Hampshire, with paper ballots, did not have similar problems (if you consider that Iowa had problems). If we look ahead on the calender, NV is a caucus state, with a history of convention issues, and votes to be reported with another app of unknown provenance, still under development (!). Of course, every state is different, and so different approaches to ballot control are to be expected; Jon Ralson, of the infamous fake chair-throwing story in 2016, is to be a moderator for the pre-caucus Nevada debate. California, among other defenses, has an extremely complicated balloting process, whose evident effect is to disenfranchise voters. Alert reader SB send in the following image: 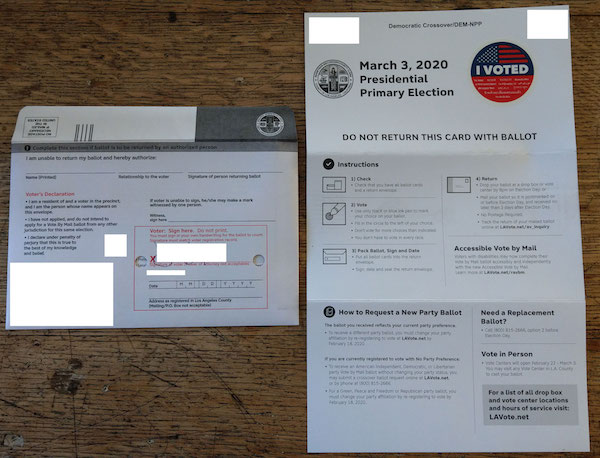 I will be 60 years old this year and I don’t know how to fill out the [family blog] Vote By Mail envelope.

Attached photo of the instructions and the envelope. (I covered anything that might be identifying information)

1. The internal instructions say to “Sign, date and seal the return envelope” but in the signature box on the envelope, there is an additional line that says “Address as registered in Los Angeles County (Mailing/P.O. Box not acceptable)” It’s a very small space.

There is no mention of including an address in the instructions.

I first contacted the State Registrar who sent me to the County which appears to be an automated system so I couldn’t figure out how to get through to anyone by phone. Their website has an email address, so I’ve sent an email to the LA County Registrar.

This is so stupid….but the last thing I want to do is void my ballot because I didn’t put the date in the correct place or did or did not include an address…

Or not stupid, eh? (The California Democrat process for allowing independent voters to vote in their primary is also famously convoluted, such as to make a putatively open primary closed. There is also the new California VSAP digital voting system in Los Angeles, which is an open invitation to election fraud.

It’s not an accident that insitutional factors in the Democrat Party are coming to the fore, now that millions of newly involved voters are experiencing them for the first time. Stoller has an interesting thread on this:

1. Why is Bernie popular among Dem voters but not Dem elites? Studying monopolies in different markets has give me a new perspective on the Democratic Party. Because the Democrats, as it turns out, are a concentrated market. Here's how it works. https://t.co/uj6TsDV43s

I greatly admire Stoller’s deep knowledge of the Democrat Party at a granular level; but I’m not sure about his model of what a party is; I think “cartel” may not be quite as big a hammer as he thinks. Reader comments on this point welcome!

(4) Sanders’ Theory of Change Is Not Disproven

The Democrat’s house is “a house divided” by class; taking income as a proxy for class, Sanders clearly gets the working class, and Buttigieg (and surely Warren) get the PMC (who, see Thomas Frank, currently dominate the Party). “I do expect it will cease to be divided,” but how? That remains to be seen. Sanders must bring in new voters; his theory of change is to expand (and organize) the electorate (which the liberal Democrats, by their actions, vociferously oppose). Has he done so? In principle, yes, since the working class greatly outnumbers the PMC. We are seeing hints of a working class, well, “wave” from IA (the Ottumwa meatpackers, etc.) and hints here in NH, but I don’t think we’re seeing enough to make a judgment. Perhaps in CA.

(5) Consider a Brokered Convention in Milwaukee

Those who want Sanders to win on the first ballot must expect Sanders to start winning outright majorities. He’s not doing that. I doubt very much he will do that in Nevada (hat tip, Harry Reid), or South Carolina. If Sanders wins California, that will be an amazing achievement, but the California Democrat Establishment is as nasty as they come. I don’t believe that the Democrat Party establishment will ever roll over, and allow Sanders to be nominated even if he leads in the delegate count. Too many little Madisons need too many ballet lessons for the Democratic strategists, consultants, lobbyists, media assets, and party elites to simple concede power, even to the future of their party. So, I assume that the Sanders campaign is gaming this out. A point to consider is that the Milwaukee convention is currently an omnishambles (and perhaps, like IA seems to have, been, a chaos ladder?) If we end up with the Milwaukee equivalent of Grant Park in Chicago 1968, that would probably hand the election to Trump (something most Democrat elites, deep down, would be quite happy with), but more important, could destroy the “army” that the Sanders campaign so carefully put together, rendering it incapable of independent operation following the convention after a collapse in discipline and subsequent backbiting and recrimination. For some, that might not be a bad thing.

Many are now giving Sanders the dreaded “front-runner” status. This is often equivalent to the dreaded “vote of confidence” for a baseball manager, as the media prepares itself to leisurely pull the wings off the front-runner fly. We’ll see if that happens this year.