Yves here. When citizens have trouble paying for basic needs like housing, it should come as no surprise that they get unhappy and correctly blame the people in charge. But even worse, look at the spending impact. The Conservative policy largely failed even by its own warped standards. However, one might argue vote suppression of low-income households was a feature, not a bug.

Homelessness and precarious living conditions are on the rise across much of the Western world. This column examines the impact of a shock to the affordability of rent in the private sector in the UK, in the form of a cut in housing subsidies for low-income households, on homelessness and insecure living conditions as well as on democratic participation. The findings suggest that the cut was, to a large extent, a false economy. The net fiscal savings for the central government were markedly offset by significantly higher local government spending to meet statutory obligations for prevention of homelessness. The cut also led to widespread distress among benefit claimants, some of whom went into rent arrears and were forcefully displaced from their homes.

A predominant issue facing the UK, and many other advanced economies, is a lack of affordable housing. With an overall inelastic housing supply and flatlining productivity growth, house prices have accelerated at a faster rate than incomes, worsening affordability. In the UK, the share of homebuyers with a mortgage declined from 37% in 2007 to 28% in 2017. This has allowed the private rented sector to thrive. The decline in new homebuyers has been nearly fully offset by a steady rise in the share of households renting from the private sector, which increased from 13% of households in 2007 to around 20% in 2017.

Housing costs, especially for the lowest income groups, constitute a significant percentage of disposable income, and many OECD countries have social assistance schemes in place to help low-income households with the cost of renting. In the UK, housing benefit provides a means-tested support for low-income households to meet the cost of rented accommodation. The fiscal burden of this welfare benefit – which is mostly a transfer from taxpayers to property owners – is growing and accounted for £21.9 billion in public spending in 2017-18. What happens if such a benefit is suddenly and drastically lowered?

In a new paper (Fetzer et al. 2019), we carefully trace out the fiscal, social, and economic implications of a drastic and persistent cut to housing benefit in the UK which was initiated by the Conservative-led coalition government in April 2011.

The Fiscal Shadow of Housing Benefit in the Private Rented Sector

The Local Housing Allowance (LHA) was introduced in 2008 as a way to compute housing benefit. The aim was for housing benefit to be generous enough to ensure that private sector tenants would be able to afford the median level of rent for a property of specified size in a local housing market (formally, within defined broad rental market areas, or BRMAs). Naturally, linking housing benefits to local rents through the LHA implied that the increase in private sector rents had a direct impact on public spending. From April 2011, the allowance for different sized properties within a BRMA was cut so that instead of covering the median rent, it only covered the 30th percentile. In addition, ‘excess payments’ – whereby housing benefit claimants who had previously lived in slightly cheaper accommodation were allowed to keep the difference in the rent and the LHA applicable, up to a difference of £15 pounds per week – were immediately cut. The cuts implied a significant financial loss for existing housing benefit claimants.

In late 2010, the Department for Works and Pension (DWP) conducted an economic impact assessment of the housing benefit cut using detailed administrative data. Panel A of Figure 1 presents data on the number of households affected expressed as a share of all resident households, while Panel B presents the spatial distribution of the average annual loss per affected household at the district level as observed from the DWP’s impact assessment of the LHA cut. The map highlights that there is significant variation across the UK in the intensity of the cut, with London clearly standing out as being among the worst affected areas. The average exposure to the cut amounted to an annual housing benefit reduction equivalent to £600 per affected household per year, rising to significantly more than £2,000 in many parts of London. Throughout the UK, around 0.9 million households in the private rented sector were affected by the cut – constituting around 5% of all households and up to 25% of all households in the private rented sector. 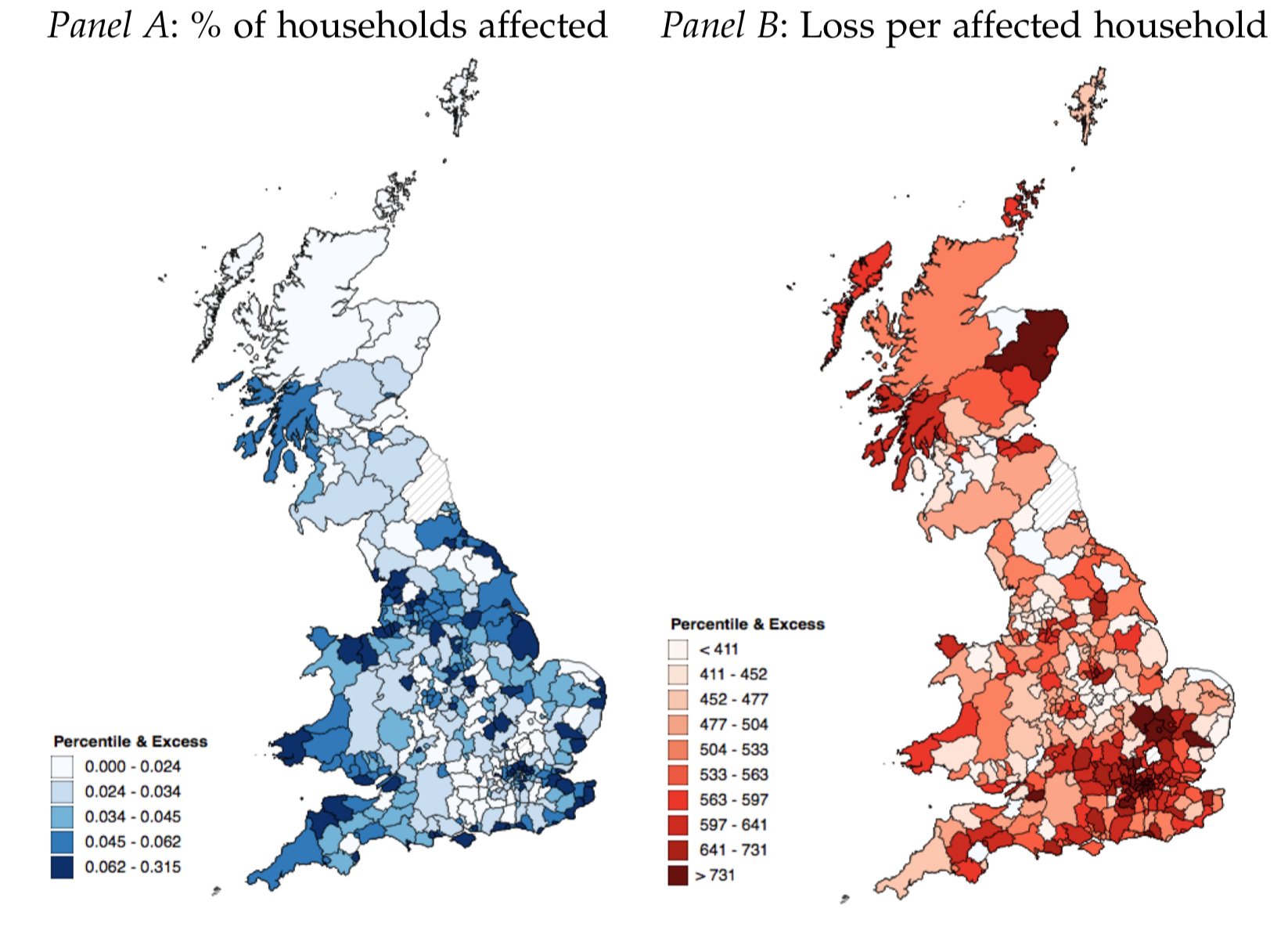 We use these simultaneously introduced cuts to housing benefit to carefully trace out the fiscal, social, and economic impact of cuts to housing assistance. We mostly rely on extensive administrative data, leveraging these ex-ante projections to measure treatment intensity, and study the causal effects of the shock in a differences-in-differences framework with quite relaxed identifying assumptions.

We find that a one standard deviation policy shock (a loss of approximately £546 per year per affected household) in private rented sectors led to a 22.1% increase in eviction actions on private sector tenants compared to the pre-reform period, with the numbers being higher in London. There is no discernible impact on eviction actions issued to the social rented sector, which acts as a good placebo test as housing benefit for these tenants was unaffected by the reform. This finding therefore reaffirms that the impact was only observed in the private rented sector, where evictions and repossession actions were carried out, mostly due to rent arrears, as a result of housing benefit claimants in this sector being directly affected by the LHA cuts.

Households are considered to be in ‘statutory homelessness’ if the local authority considers that they do not have a right to occupy a property, or are at imminent risk of becoming homeless. Local councils have a statutory obligation to provide accommodation to these vulnerable households, which also often have a priority need. As a result of the sharp rise in evictions, we would expect an increase in demand for temporary accommodation which needs to be satisfied by the local councils who bear this statutory obligation. This is also reaffirmed in the data, with a one standard deviation policy shock leading to an increase in statutory homelessness and rough sleeping rates of between 10-13% and nearly 50%, respectively, along with a rise in households being placed in temporary accommodation of 18.8%.

Data provided by councils provide further evidence on who is affected by homelessness and why they became homeless. Since 2011, the structure of statutory homelessness has dramatically shifted, with rapid rises in homelessness concentrated in the working-age adult population and, in particular, among households with children. A one standard deviation increase in exposure to the housing benefit shock is associated with a 25% increase in the number of families with children being classified as homeless. The predominant reason why households become homeless in districts most exposed to the housing benefit cut is (legal) eviction from rented accommodation.

Naturally, studying households in precarious living conditions using survey data is difficult, as these households may be particularly likely to move frequently from one accommodation to another, which may increase the risk that they drop out from such panel surveys. In the Understanding Society Panel Study, we find that between 40% and 50% of private rented sector tenants drop out from the panel study. For individuals that own their property (outright or with a mortgage), attrition rates are much lower at around 30%. Using the Understanding Society Panel Study, we highlight that attrition is likely an important margin: we find that   individuals (likely) exposed to the housing benefit cut were much more likely to drop out from the panel study after the reform took effect. We further show that it is these same individuals who are exposed to the benefit cut that report that they are increasingly falling into rent arrears rent in the most recent wave prior to them dropping out from the survey. This highlights that survey data, which are often used to inform policymaking, may be systematically skewed and not representative of vulnerable sample populations if there is policy-induced selective attrition.

For a small subsample of households that do not drop out from the survey, we further observe that individual-level exposure to housing benefit cuts is associated not only with increased rent arrears but also with a higher propensity to be evicted, mapping very closely to the results obtained from the district-level analysis.

Effect on Electoral Registration and the EU Referendum Vote

We also link exposure to the housing benefit cut to measures of democratic participation. The more descriptive results suggest that a one standard deviation increase in exposure to the housing benefit cut is associated with a non-negligible reduction in the electoral registration coverage rate (i.e. the ratio between the number of registered voters in a district and the number of voting-age adults in that district). We further document that a one standard deviation policy shock is associated with a fall in the official electorate for the 2016 EU referendum as a share of the voting-age population of 0.7-0.9 percentage points. The actual turnout for the referendum was significantly lower in districts more affected by the cut, with a one standard deviation increase in exposure to housing benefit cut leading to a fall in turnout of 1.3-1.8 percentage points. Lastly, we also observe that a one standard deviation increase in the level of exposure to the cut in a district is associated with up to a 2.2 percentage point greater level of support for ‘Leave’. This effect is likely driven by the composition of the electorate, as studies since the referendum have revealed that among those that did not turn out in the referendum, support for Remain outnumbers support for Leave by 2:1.

The housing benefit cut dramatically increased statutory homelessness and rough sleeping, as mentioned above. Since local authorities have a statutory obligation to house households that are, or are at risk of becoming, unintentionally homeless, the local authorities had to rent properties, sometimes from private landlords and often at market rental rates, to provide temporary accommodation and other homelessness prevention services. Even though the cut to housing benefits was originally intended to provide fiscal savings to the DWP, we show that a large portion of the savings were offset by local council spending on anti-homelessness measures, thereby leading to a dramatic shifting of the burden from central to local government. This partially defeats the original object of the housing reform, which aimed to reduce fiscal exposure to rapidly rising market rents. Figure 2 illustrates the lower housing benefit spending by DWP and higher local council spending on anti-homelessness measures. 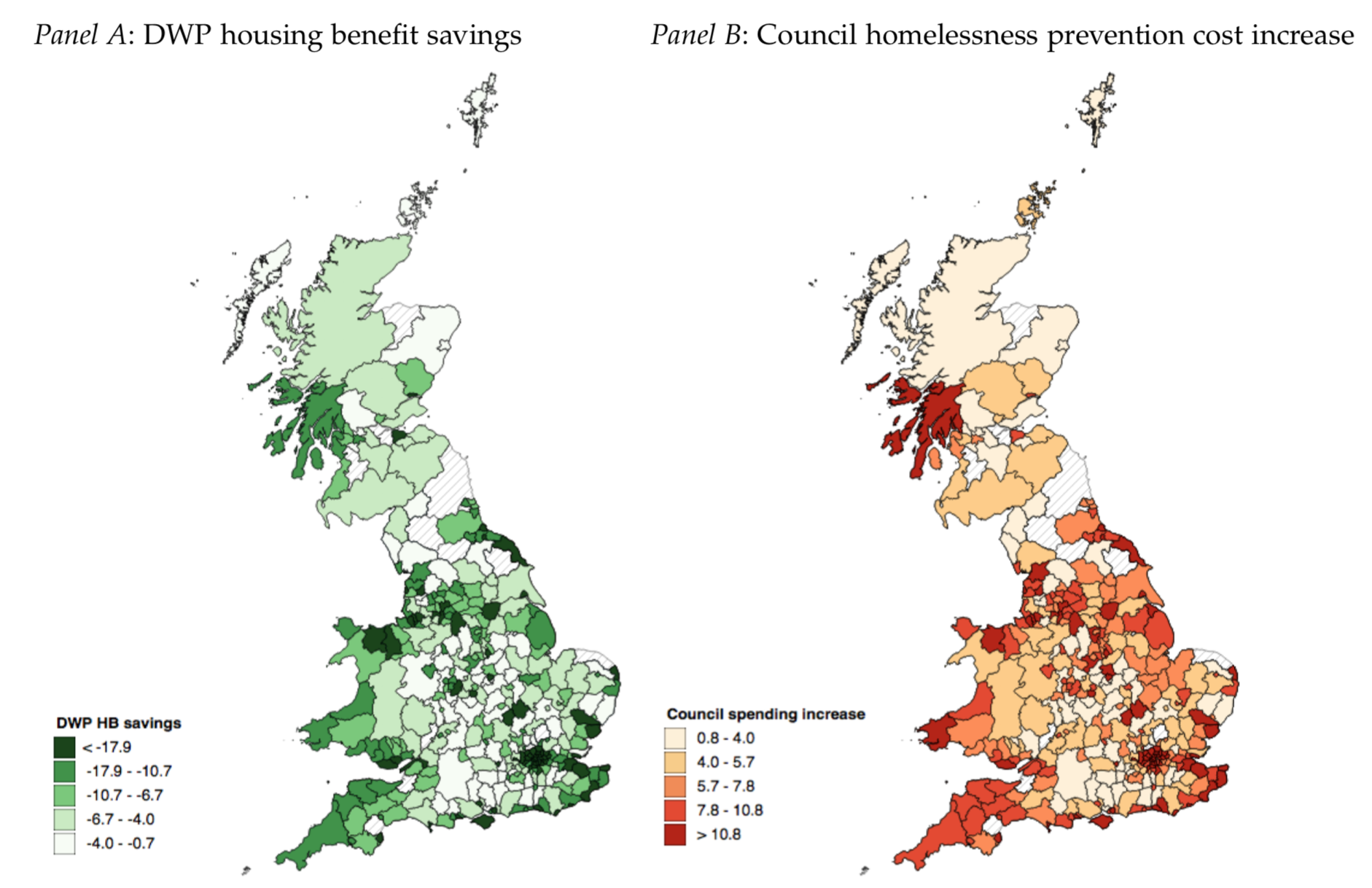 Our calculations denote that in the case of the median (mean) council, for every £1 saved in lowering spending on housing benefit, 75p (53p) is spent on preventing homelessness or on housing individuals at risk of becoming homeless in temporary accommodation. The further indirect social and economic costs due to the potential adverse effects on outcomes, especially for children brought up in insecure conditions, likely weigh in even further.

Cutting housing subsidies, while appearing to be fiscally attractive, may result in significant economic and social costs. Insecure housing and forced displacement – which, as we show, can directly result from cuts to housing assistance – may result in further social costs such as negative consequences for health (Fowler et al. 2015) or labour markets (Van Dyk 2019), and may also have adverse effects on children’s educational attainment (Humphries et al. 2019, Chyn 2018). We also show that insecure housing may erode democratic participation, increasing concerns over political legitimacy. In that sense, our work contributes to a growing literature that examines the role that housing plays in shaping contemporary political preferences (Ansell 2014, 2019, Adler and Ansell 2020), and in particular the role that welfare cuts may play in shaping political outcomes (Fetzer 2019).