By Hubert Horan, who has 40 years of experience in the management and regulation of transportation companies (primarily airlines). Horan has no financial links with any urban car service industry competitors, investors or regulators, or any firms that work on behalf of industry participants

Prior to 2019, Uber had shut down its failed operations in China, Russia and Southeast Asia in return for a debt or equity position in the larger local company (Didi, Yandex, Grab) that had driven it out of business. As discussed in Part 19 of this series,[1]  Uber improperly included the claimed gains from discontinuing these operations in its 2018 Net Income from Continuing Operations. This created the false impression that its ongoing marketplace activities had achieved a $5 billion profit improvement in 2018.

The chart below shows the corrected GAAP Net Losses, with the impacts of discontinued operations excluded on a consistent basis. Uber has lost $18.5 billion in the last four years. 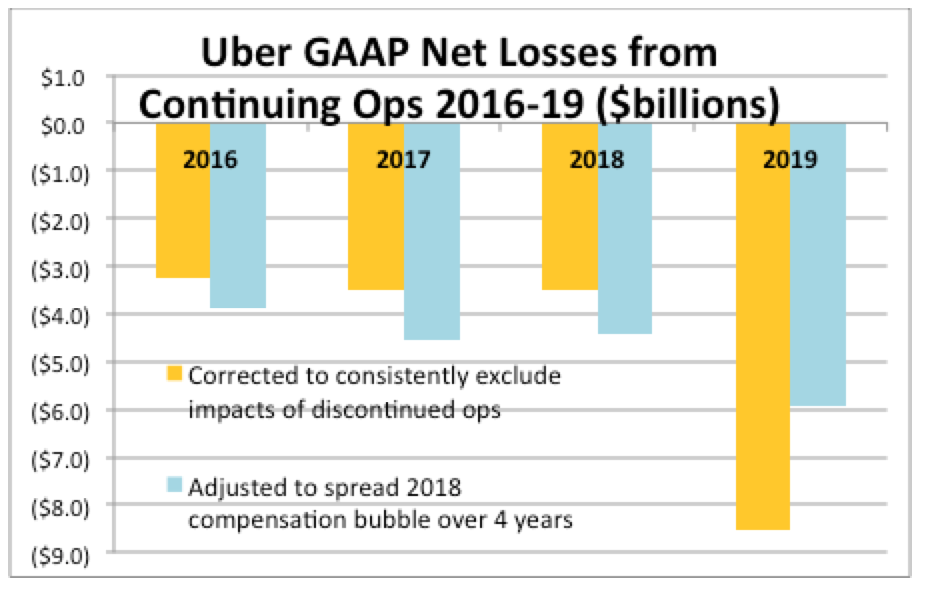 Uber’s May 2019 IPO converted longstanding promises that stock issued to employees would someday have significant value into reality. Following GAAP rules, Uber recognized $4 billion in stock-based employee expense this year, but this was obviously compensation for work employees had done over many years. The chart spreads the $4 billion in suddenly recognized compensation expense over four years, on the basis of each years’ total expenses excluding stock based compensation.

With this adjustment one can see that Uber’s profitability hadn’t worsened by $5 billion in 2019, but it did deteriorate by perhaps $1.5 billion. Its underlying 2019 profit margin was roughly negative 42%, instead of the negative 60% shown in the annual report.

But Uber has clearly failed to improve the profitability of its business over the last four years. 4th Quarter 2019  GAAP losses were 23% worse than 4th Quarter 2018, a comparison that was not significantly affected by the stock-based employee compensation or other major accounting issues.

The cash burned by Uber’s operations and investment activities also worsened, going from $2.2 billion in 2018 to $5.1 billion in 2019. Uber still has huge cash reserves, having raised $13.6 billion in the last two years, including $8 billion from the IPO. 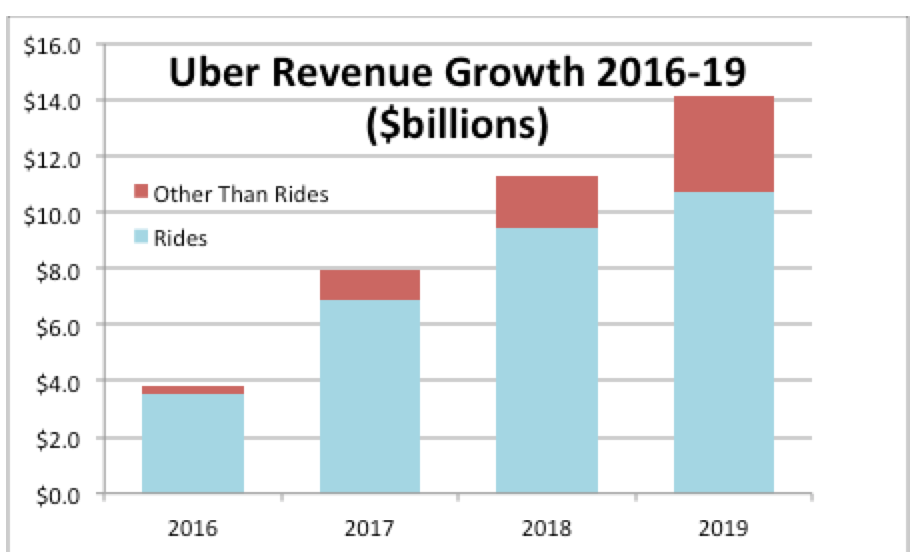 Revenue growth in Uber’s core “Rides” business continues to slow down. Year-over-year growth of 95% in 2017 declined to 37% in 2018 and 14% in 2019. Uber’s “Other Than Rides” businesses continue to grow rapidly (up 76% in 2018 and 85% in 2019). This allows Uber to site somewhat stronger overall revenue growth rates (42% in 2018 and 26% in 2019), although growth is still slowing. And Uber acknowledges all its newer business have much lower profit potential than “Rides”, so  the relatively faster growth of these lower margin businesses is undoubtedly contributing to the deteriorating overall profit picture.

For many years this series has argued that the market is fundamentally unwilling to pay prices that would cover Uber’s actual costs, that after ten years it has demonstrated that it cannot “grow into profitability” and that there is no evidence that Uber’s business model is capable of achieving the massive, multi-billion dollar improvements that would be required to achieve sustainable profitability anytime soon. There is no data in Uber’s 2019 Annual Report that would cast any doubt on these arguments.

As with its IPO prospectus, Uber’s 2019 8-K makes no attempt to lay out evidence showing a possible path to profitability, and provides none of the data outside analysts would need to understand whether at least some parts of the business are improving. Uber does not publish data that would allow investors to understand the actual unit revenue and unit cost performance of each business, or different markets served by each business. There is no data on market share or customer retention, or whether inventive or promotional programs are profitably improving either. There is no data on driver economics or driver retention/turnover rates. There is no data on driver or vehicle revenue productivity trends. There is no yield data, or Uber’s ability to achieve yield premiums based on time-of-day, customer loyalty, or any form of market segmentation. There is no data on synergies between Uber’s businesses, or anything that would allow investors to evaluate the economics of the company’s “Amazon of Transportation” strategy.

Since its GAAP profitability results are so awful, Uber’s financial releases and Dara Khosrowshahi’s public statements have come to almost exclusively emphasize EBITDA measures. The problem is that none of these honestly measure EBITDA, and Uber aggressively misrepresents EBITDA as “profit.”

Earnings Before Interest, Taxes, Depreciation and Amortization (EBITDA) is a non-GAAP intermediate contribution measure that has no obvious relevance to Uber, and even if accurately calculated should be ignored by investors. EBITDA is sometimes used by companies with very large fixed assets, large intangible assets (such as goodwill acquired after a major merger) or significant debt financing to give outsiders a crude sense of a company’s ability to meet its outstanding financial obligations. Uber has none of these characteristics.

More importantly, Uber’s reported “EBITDA” numbers exclude billions of expenses other than interest, taxes, depreciation and amortization. Its primary EBITDA measure excludes the $5 billion in stock-based employee compensation. Its “Segment Adjusted EBITDA” measure also excludes all of the IT expense supporting the Uber platform, and the corporate expenses (accounting, lobbying, etc.) directly supporting all of its current operations.

Uber calls these measures “EBITDA” in the hopes of misleading outsiders who would normally expect a small and fairly consistent gap between true EBITDA and GAAP profitability, and misleading people who might assume that overall “EBITDA and “Segment Adjusted EBITDA” would have been calculated the same way. If Uber were not trying to mislead outsiders it could have labeled them as “Earnings Minus a Bunch of Compensation, Indirect Operating and Non-Operating Expenses”  or “Segment Revenue Minus Short-term Variable Costs” rather than using a well-established accounting term that means something materially different.

Uber’s presents “Segment Adjusted EBITAR” measures as a means of measuring the profitability of Uber’s different business units. Uber works aggressively to misrepresent it as a “profit” measure even though in 2019 it excluded $8.8 billion (40%) of the expenses relevant to an actual profit calculation. The press release announcing 2019 results claimed “Rides Adjusted EBITDA delivered a $742 million profit” instead of the more truthful “delivered a $742 million contribution against costs not directly related to specific trips”.

This series has highlighted Uber’s ability to get the financial press to endorse and amplify its false narrative claims. While Uber’s SEC filings have the actual definitions of each measure buried in footnotes, Uber knows that that almost no one in the financial press will dig them out and make sure readers accurately understand Uber’s claims.

One Wall Street Journal writer accepted Khosrowshahi’s Segment EBITAR/profit conflation at face value, reporting “Uber last year made money on its rides when unrelated costs were excluded, he has said” [2].

Another Wall Street Journal reporter’s article about Uber’s third quarter earnings emphasized that Khosrowshahi “is more upbeat about 2021, expecting to turn a profit” did not mention the $1.9 billion quarterly loss until the fifth paragraph, and did not mention that “profit” did not actually meant “profit” until much later. It also repeated Uber’s claim that “ride-hailing.is its only profitable business unit before interest, taxes, depreciation and amortization” without explaining that “ride-sharing EBITDA” also excluded significant employee compensation costs and all of the IT and other corporate costs needed to support ride-hailing. [3]

The Wall Street Journal reporter covering Thursday’s earnings release was even more incompetent. Even though the officially reported annual loss had skyrocketed to $8.5 billion, her story was headlined “Uber Moves Closer to Profitability as Revenue Climbs.” [4]

In the analysts’ conference callon 2019 results, Dara Khosrowshahi promised that the 4th Quarter of 2020 would be Uber’s first “EBITDA positive quarter.” He claimed Rides would achieve 45% EBITDA margins and Eats would achieve 30% margins.

In 2015 Travis Kalanick predicted that Uber’s North American operations would be profitable by 2017. [5] Several months after becoming CEO in 2017 Dara Khosrowshahi said that his goal was for Uber “to nearly break even in 2018 and be profitable by 2019” ahead of its planned public offering. [6]

Uber studies in 2018 used in discussions with prospective lenders delayed breakeven expectations by a year. “Under that same likely “base case” scenario, Uber management believed it could turn profitable by 2020, when it would make $1.5 billion in EBITDA. …Uber is banking on net revenue growth more than making up from the rise in expenses.” [7]

Uber avoided making any statements about future P&L improvements in its SEC-scrutinized IPO prospectus, but made a variety of claims in its IPO roadshow, including that future growth “will generate a profit margin of 7% as a percentage of all gross bookings” [8].

Following the dismal performance of the IPO the promised breakeven was pushed back another year (to 2021) and new “Segment Adjusted EBITDA” based claims emerged about the profitability of its core “rides” business. Khosrowshahi’s conference call claim advances this deadline by one quarter.