Yves here. Team Dem is in deep denial about how bad their Iowa conduct makes them look. 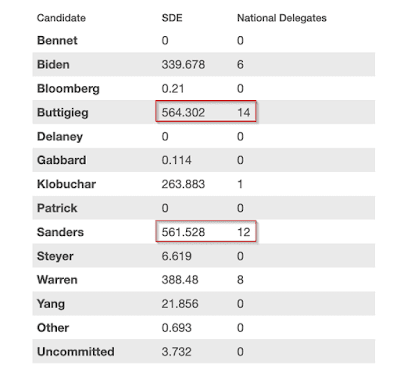 The latest final results from Iowa as of the February 9 (source, also here, though the Des Moines Register begs to differ). Despite having a lead of less than 1% in SDEs, Buttigieg has now been given a lead of two national delegates (16% more delegates than Sanders is given).

I can’t leave the Iowa Caucus story without noting this. According to Trip Gabriel of the New York Times, the Iowa Democratic Party will not change even blatant errors in its report of results because it wants to “ensure the integrity of the process” — while at the same time saying that “The Iowa Democratic Party continues to be fully committed to ensuring the accuracy of the caucus data that we report”.

You read that right. Mr. Orwell would be proud.

Gabriel writes via Twitter, quoting the opinion of the IDP attorney:

The incorrect math on the Caucus Math Worksheets must not be changed to ensure the integrity of the process. … The IDP’s role is to facilitate the caucus and tabulate the results. Any judgement of math miscalculations would insert personal opinion into the process by individuals not at the caucus and could change the agreed upon results. That action would be interfering with the caucus’ expression of their preferences.

There are various reasons that the worksheets have errors and may appear to not be accurate, however changing the math would change the information agreed upon and certified by the caucus goers. If campaigns want further recourse they will need to work all of the way through the process to a Recount where the Presidential Preference Cards are opened and counted.

But there’s a problem with those Presidential Preference Cards. Gabriel notes that “going back to the “presidential preference cards” that each caucus-goer was supposed to turn in — wouldn’t be definitive either. Random caucus chairs I interviewed said several people in the room who voted never turned in their cards for whatever reason.”

As Gabriel notes in his NY Times piece on the same subject:

“The incorrect math on the Caucus Math Worksheets must not be changed to ensure the integrity of the process,” wrote the party lawyer, Shayla McCormally, according to an email sent by Troy Price, the chairman of the party, to its central committee members. The lawyer said correcting the math would introduce “personal opinion” into the official record of results.

This is the boldest of Catch-22s. To ensure the “integrity of the process, worksheets that “have errors and may appear to not be accurate” cannot be changed, since they are a legal record of the caucus.

So, for example, an error as obvious as this one… 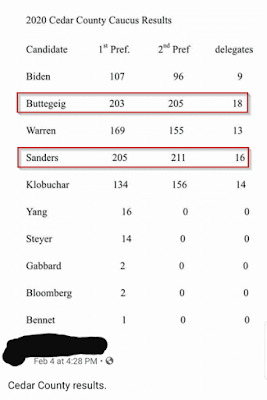 …might never be corrected. Ryan Grim has noted via his newsletter: “Certifying knowingly false election results is arguably against federal election laws, and the Iowa Democratic Party is playing with fire here,” but that seems to have stopped no one at the IDP.

Sanders To Ask for a “Partial Recanvas”

The latest news is that Senator Sanders has asked for a partial recanvas of the Iowa vote:

A campaign aide confirmed the plans Sunday night, ahead of a Monday deadline for candidates to ask the Iowa Democratic Party to recanvass the results. A recanvass is not a recount, but a check of the vote count to ensure the results were added correctly.

The Associated Press remains unable to declare a winner because it believes the results may not be fully accurate and are still subject to potential revision.

I’m not sure what good that will do in producing an outcome that can be believed, and in the end the one or two delegate difference won’t make much difference at all at the Convention, but we can applaud, at least, the effort to save face for the Iowa Democratic Party, whose own face it’s determined to tar.

A Clown Show Performance Without Appearance of Impartiality?

The Iowa Democratic Party seems intent on proving all suspicions of bias correct, despite an overwhelming number of commenters willing to offer the lesser explanation, incompetence. As Matt Taibbi astutely put it, in the end the Iowa Caucus was a “clown show performance by a political establishment too bored to worry about the appearance of impartiality.”

Though we may close the book at some point soon on this sad open to the 2020 Democratic Primary, voters may not. By the time the Convention chooses its nominee, the clown show performance in Iowa, with no appearance of impartiality may come to characterize the whole of the rest of the exercise.

If it does, if the Milwaukee end of the process looks as false as its corn field start, the effort to defeat Donald Trump may well have received its final, fatal blow a full nine months before the first November ballot was cast.