Many of those problems can be traced to two issues for the Permian Basin: The quality of its oil and the sheer volume of natural gas coming from its oil wells.

The latter issue comes as natural gas fetches record low prices in both U.S. and global markets. Prices for natural gas in Texas are often negative — meaning oil producers have to pay someone to take their natural gas, or, without any infrastructure to capture and process it, they burn (flare) or vent (directly release) the gas.

As DeSmog has detailed, much of the best oil-producing shale in the Permian already has been drilled and fracked over the past decade. And so operators have moved on to drill in less productive areas, one of which is the Delaware sub-basin of the Permian. Taking a close look at the Delaware Basin highlights many of the current challenges facing Permian oil producers.

Delaware Basin Producing More Gas Along With the Oil

The Delaware Basin is where most of the new oil production is coming out of the Permian. As a Bloomberg Wire story reported in December, “in recent years investments have shifted to the Delaware, where output is much gassier than in the historic Midland portion of the Permian.”

The last thing a Permian oil producer wants is to have natural gas coming out of the ground with the oil because, as Bloomberg notes, this persistent “nuisance” is “undercutting profits for explorers.” That’s a generous assessment because many explorers have no profits to undercut, only losses to grow.

Shale wells become “gassier,” or produce more natural gas, as they age and oil production falls. And this problem hasn’t improved for wells in the Delaware that are drilled closer together, compounding the Permian’s gas problem.

With natural gas prices often going negative in Texas, producers are turning to flaring and venting more of the gas, which is mostly the powerful greenhouse gas methane. Public awareness has been rising for this issue, due in part to the work of people like Earthworks’ Sharon Wilson who uses a special camera that can “see” invisible methane leaks from the oil and gas supply chain. As a result, public pressure has been growing on the industry to deal with its methane problem.

Fracking CEOs have been publicly noting that this issue U.S.\ shale industry can’t flare or vent its excess methane, those companies will likely be forced to shut down oil production due to cost.

Another example of how much pressure has been building on shale companies to address their methane problem: Flaring is currently the key issue in an election for one of the seats on the Texas Railroad Commission, the state oversight body that in reality hands oil and gas producers a free pass to flare and vent. In this election, candidates challenging the incumbent have been promising to do more to stop flaring and venting.

It also is likely to become a much bigger issue as new satellites come online that can accurately map industry methane leaks from space, such as the satellite that recently revealed a well blowout in Ohio that created the second biggest methane leak in U.S. history.

Besides its gassy oil wells, the Permian Basin has another big problem. Fracked oil has always been light oil — often referred to as “light tight oil” — which is due to the high percentage of natural gas liquids contained within it.

There are two types of oil coming out of Permian Shale operations: West Texas Intermediate and West Texas Light. The oil is classified based on an industry measurement of a petroleum product’s heaviness compared to water, a  measure known as “API gravity.” West Texas Intermediate has an API gravity range of 38-44 while West Texas Light ranges from 45-49. At 50 APIand above, the petroleum liquid is no longer considered “oil” but instead classified as “condensate.” (However, some in the industry consider anything over 45 APIto be condensate.)

Some in the industry are calling the condensate “super-light” or “ultralight” oil — which looks like another industry effort to obfuscate one of its many problems. As I reported in early 2015, when the oil industry wanted to get around the crude oil export ban (since lifted), it convinced the Obama administration to let it export “condensate” because that wasn’t considered crude oil. No one was calling what was coming out of shale basins “super-light oil” then.

Lighter oil is worth less than the heavier oils that U.S. refiners want. West Texas Light is worth $1 to $2 less a barrel than West Texas Intermediate. Condensate is discounted even more, and these discounts aren’t helping a fracking industry struggling with debt and impatient investors.

This problem was already well known in 2018. That was when independent research consultancy Energy Aspects highlighted the issue with the clever phrase: “The unbearable lightness of the Permian.” “Unbearable” because whatever producers want to call it, “condensate” or “super-light,” the Permian is pumping out a product that is less valuable and pumping out a lot of it — especially in the Delaware sub-basin, where drilling activity is increasing.

At the time, Energy Aspects noted, “Approximately 70 percent of new oil produced in October 2018 in the Permian basin was condensate (defined as being >50 API).”

According to the @EIAgov January EIA-914, all of the oil production growth in Texas from October 2019 to November 2019 was greater 50 API.

In addition to the Permian posing challenges to oil producers, the much-lauded shale basin has been a financial disaster for oil service providers — the companies that do much of the actual work of drilling and fracking.

And in late January, oil industry analysts at Wood MacKenzie held a webinar titled, “Shale service costs in 2020: what is the market telling us?” to discuss where production costs — often the money that is paid to oil services companies — were headed in the future.

The conclusion was that costs have to go up because the current cost structure is unsustainable, a conclusion that is relatively obvious when looking at the huge losses in shale by the industry leaders. 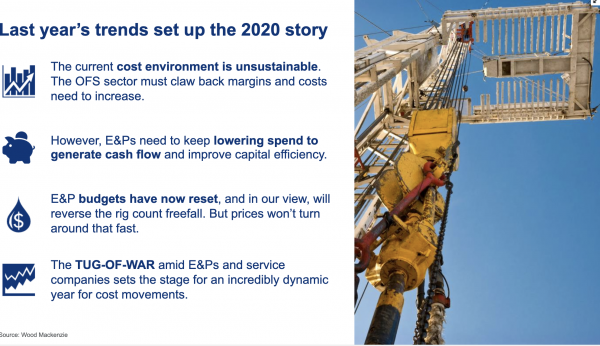 2020 Will Be More Difficult for Shale Industry and the Permian

In 2018 the Wall Street Journal ran a headline predicting that would be the year the shale industry finally made real money — it wasn’t. Earlier this year, the CEO of Parsley Energy made the same claim about 2020. But with oil prices falling and all of the challenges facing the industry, the odds are he too will join a long list of people making incorrect predictions about the future profitability of the shale industry.

Besides those problems outlined here already, there are other ongoing issues facing frackers. Highly toxic fracking wastewater disposal continues to be a challenge, well casing failures that cause costly well blowouts are a growing issue, and the industry still has not figured out how to properly space wells to avoid lower well production.

Right now, there is no good news for the Permian or the fracking industry, and 2020 will very likely be another year of big losses, more debt, and more bankruptcies. Each year makes increasingly clear that the vaunted shale boom will be one of the biggest financial busts in U.S. history.