“They were careless people, Tom and Daisy- they smashed up things and creatures and then retreated back into their money or their vast carelessness or whatever it was that kept them together, and let other people clean up the mess they had made. — F. Scott Fitzgerald, The Great Gatsby

In the United States, #COVID-19 began with globalization and globalizers. One thing we can be sure of is that grovery workers — to whom the virus will “trickle down” soon enough — didn’t create the conditions for it, or introduce it. Let’s take a look at the grocery workers before dollying back to the global. From the Los Angeles Times, “Column: How coronavirus turned supermarket workers into heroes“:

Today supermarkets are playing a ground-zero role in our struggle to adapt to restrictions imposed by COVID-19. And grocery workers are bearing much of the the brunt of our anxiety and frustration, as we [who?] descend on depleted stores.

Without masks or barriers, employees are working long hours, risking infection and battling exhaustion to do their jobs. They connect us to material essentials, like bread and toilet paper. But they’re also part of the social fabric that holds us together in unsettling times.

That friendly chat with the guy restocking the egg case this morning might be my only social interaction on this shelter-at-home day. And I feel better whenever I see my favorite cashier at her register. There’s something reassuring about the familiar in a world where everything has changed.

Markets are about the only place we’re still allowed to gather en masse. And their employees — pressed into service in ways they never expected — are our new first responders. They’re apt to see us at our worst, and they aim to ease our strain.

“They’re dealing with a public that’s fearful, apprehensive and frustrated, and it gets hostile,” [said John Grant, a former meatpacker who is president of the union that represents grocery employees in Southern California]. “This wasn’t what they signed up for, but they realize it’s their responsibility. They’ve cursed how vulnerable they are, and yet they keep going out of their profound dedication to their communities.”

Funny thing. The people who “connect us to material essentials” are suddenly more important than Senators and Represenatives (who can fly home), or all the MBAs in the head office, or the CEOs. Heaven forfend they collectively decided to withdraw their labor!

The story of how the United States 1% deindustrialized American by moving our manufacturing base offshore (mostly to China) is well known and I will not rehearse it here. From the New York Times, “How the World’s Richest Country Ran Out of a 75-Cent Face Mask“:

The answer to why we’re running out of protective gear involves a very American set of capitalist pathologies — the rise and inevitable lure of low-cost overseas manufacturing, and a strategic failure, at the national level and in the health care industry, to consider seriously the cascading vulnerabilities that flowed from the incentives to reduce costs.

(By “reduce costs,” of course, we mean “increase profits.”) The shortage of masks has been the dominant narrative, but we don’t make anything. If masks had not been “the long pole in the tent,” as project managers say, something else would have been or will be: ventilators, gloves, nasal swabs for testing, extraction kits and pipettes, reagents, whatever. The real issue is not a shortage of this or that material essential, but a forty-year policy of globalization, supported by the ruling class as a whole, that has led to a shortage of all material essentials (and that’s not even taking austerity and the general gutting of public services into account). I have altered the famous “flattening the curve” chart (here with “dotted line to show capacity”) to show the effect” 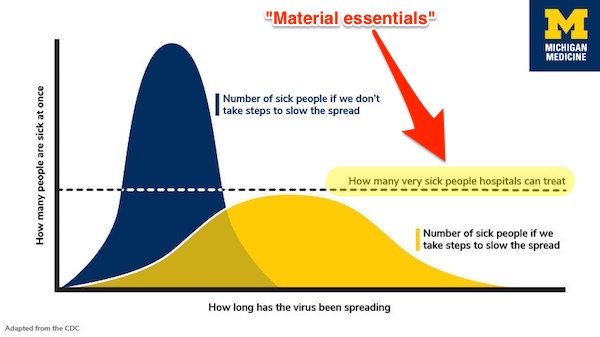 Lack of “material essentials” reduces our capacity (“How many very sick people hospitals can treat”); it pushes the dotted line down. So we either have to flatten the curve further than we would otherwise have to do, or we don’t, and lose lives. Thank you, globalization! And with that, let’s turn to the globalizers.

By globalizers, I mean the 1% on down, plus the PMC (Professional Manager Class) who own and manage our globalized system. One effect of globalization has been the vast expansion of air transport and international travel, so that globalizers can do their jobs. And that’s how SARS-COV-2 was brought to the United States:

The man who would become Patient Zero for the new coronavirus outbreak in the U.S. appeared to do everything right. He arrived Jan. 19 at an urgent-care clinic in a suburb north of Seattle with a slightly elevated temperature and a cough he’d developed soon after returning four days earlier from a visit with family in Wuhan, China.

(I’m not blaming any individual; I travel internationally myself, and there are many good reasons to do it. But international air travel was the vector that brought the virus to the United States. That is the system. I’m assuming Patient Zero travelled for professional reasons, since Wuhan is an unlikely tourist destination.)

We can make a highly suggestive correlation between globalizers and COVID-19 if we look at two simple maps. First, as is well known, one of the main distinctions between the places that are “optimistic, diverse, dynamic, moving forward” (i.e., globalizers) and the dull provincials in flyover is the possession of passports. (A passport is a likely marker for the sort of person who asks “Why don’t they just leave?”; “front-row kids,” in Chris Arnade’s parlance, as distinguished from, say, grocery workers, who he calls “back-row” kids.) Here is a map of passport ownership by state: 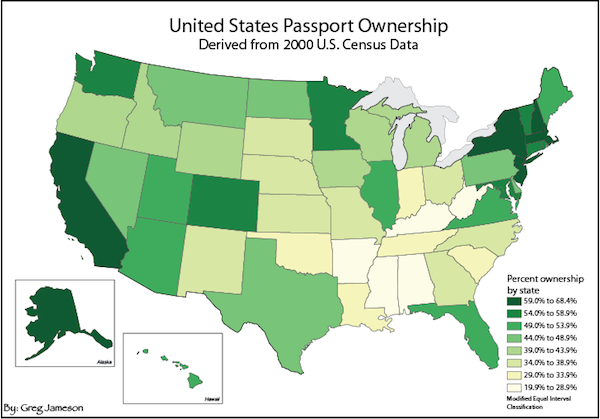 And here is a map of COVID-19 outbreaks: 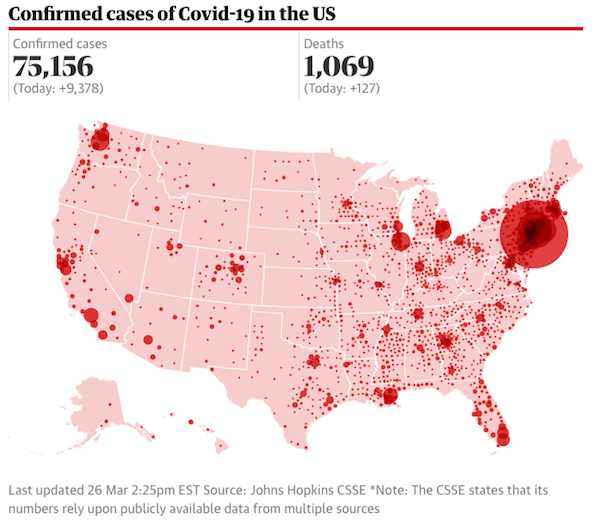 Oh, and the ability to travel by air correlates to income (a proxy for class): 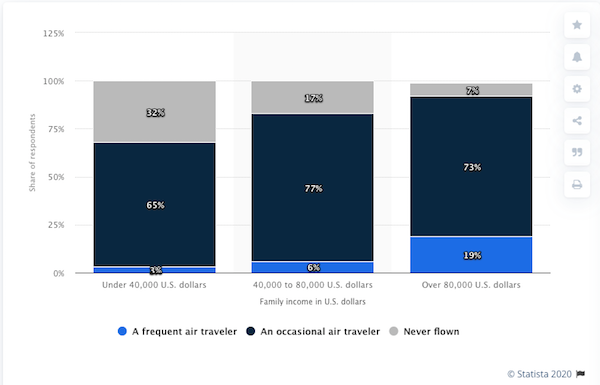 If one hypothesizes, as I am doing, that COVID-19 will trickle from globalizers downward, we might ask ourselves how that will happen. One answer, of course, is social interaction between the globalizers themselves. The New York Times describes “Party Zero: How a Soirée in Connecticut Became a ‘Super Spreader‘:”

About 50 guests gathered on March 5 at a home in the stately suburb of Westport, Conn., to toast the hostess on her 40th birthday and greet old friends, including one visiting from South Africa. They shared reminiscences, a lavish buffet and, unknown to anyone, the coronavirus.

The Westport soirée — Party Zero in southwestern Connecticut and beyond — is a story of how, in the Gilded Age of money, social connectedness and air travel, a pandemic has spread at lightning speed. The partygoers — more than half of whom are now infected — left that evening for Johannesburg, New York City and other parts of Connecticut and the United States, all seeding infections on the way.

It is the globalizers’ ability to “scatter,” in other words — both internationally and domestically — that made them such effective vectors. The Westport hot-spot was innocent, since nobody knew enough about COVID-19. Other examples are not innocent at all, where globalizers infect all those around them by trying to escape the disease. The Hamptons example is famous. From the New York Post, “‘We should blow up the bridges’ — coronavirus leads to class warfare in Hamptons“:

Every aspect of life, most crucially medical care, is under strain from the sudden influx of rich Manhattanites panic-fleeing, bringing along their disdain and disregard for the little people — and in some cases, knowingly bringing coronavirus.

The Springs resident says her friend, a nurse out here, reported that a wealthy Manhattan woman who tested positive called tiny Southampton Hospital to say she was on her way and needed treatment.

The woman was told to stay in Manhattan.

Instead, she allegedly got on public transportation, telling no one of her condition. Then she showed up at Southampton Hospital, demanding admittance.

“Someone else took a private jet to East Hampton and did not tell anybody ’til he landed,” the resident says. “That’s the most horrendous aspect. The virus is already here, and we don’t have any medical resources.”

Everybody loves a “rich people behaving badly” story, but here’s a second one. From the Los Angeles Times, “Some of Mexico’s wealthiest residents went to Colorado to ski. They brought home coronavirus“:

The frantic effort to find the ski trip participants has highlighted an uncomfortable fact: It is people wealthy enough to travel outside the country who have brought the coronavirus back to mostly poor Mexico. Yet if the disease spreads, it is those with the least who will probably suffer the most.

“The virus is imported by people with the economic capacity to travel,” wrote actor Tenoch Huerta on Twitter. “Those who ask that everything be closed and all economic activity stop, hurting the people who live day-to-day, why didn’t they voluntarily isolate for three weeks so as not to spread it? Or should only the poor be responsible?”

The same dynamic can be inferred in Blaine Country, Idaho, home of ski resort Sun Valley:

Idaho has 123 confirmed cases of COVID-19, according to the state’s coronavirus website. That includes 37 in Ada County and eight in Canyon County. Blaine County, where Sun Valley is located, has the most confirmed cases at 52. Idaho’s first case was reported 12 days ago, in Ada County. The number of people tested in the state is now up to 2,188.

(Many of the cases around the state came from travel to Blaine County.)

In my home area of Berkshire County, MA, the superrich from the city who own second homes have come up en masse, buying up all the food and refusing to quarantine. The latter means they will overwhelm an already insufficient healthcare system.

Of course, this rough-and-ready, anecdotal analysis is no substitute for formal, scientific contact tracing. But I don’t think, at this point, we will ever be able trace the original outbreaks. And I didn’t see anybody else making this argument, so I thought I’d throw it against the wall and see if it sticks. All I can say is that when I think of the grocery workers — and all the workers — in the Hamptons, Mexico, Idaho, and Massachusetts having COVID-19 brought to them, I become very ticked off. For pity’s sake, at least can we practice social distancing by traveling only when it’s essential?