For most, concerns about getting food greatly exceed actual food shortages, despite the combination of stockpiling and dislocations to supply.1 Yes, it may still be hard to get pasta. Some items are not regularly in stock, like chicken breasts. Here in Birmingham, local stores limited ground beef purchases to 2 pounds per trip. Generally speaking, the meat section hasn’t been as well provisioned. Later, customers here could only buy 2 dozen eggs. I’ve also seen some stores completely out of butter and very thinned out in frozen pizza.

How much food disruptions matter for now and the near future is very much a function of your personal situation. Many farmers are becoming victims of tightly-tuned supply chains. Two factors are having a major impact. One is the shift to eating nearly all meals at home. Before, a significant amount of daily food consumption was via restaurants and institutions, particularly school and university cafeterias. Those kitchens buy in bulk and use different wholesalers than grocery stores, who deal almost entirely in smaller package sizes, as well as more prepared items (like frozen meals and dishes, canned and packaged soups). So there’s a big mismatch between supply and demand. On top of that, Covid-19 induced closures of meat processing plants have hurt both farmers and consumers.

Needless to say, stockpiling isn’t helping. A senior manager at Costco told the Wall Street Journal that he hadn’t experienced so much demand for beef “since the Atkins Diet days”.

Consider this new Bloomberg story on how pig breeders are starting to kill their hogs rather than bring them to market:

In the U.S., at least eight major meat facilities have seen halts in the space of a few weeks, shuttering more than 15% of the nation’s pork processing capacity….

With packing plants closing, demand was getting hit for hogs already fattened up for slaughter, and for piglets that would typically replace those animals on the farm…..

In parts of western Canada, producers who normally sell baby pigs to the U.S. are unable to do so due to closures at American processing plants, Bergmann said. The shutdowns eliminate slaughter for several weeks and that creates a huge backlog of animals waiting to move through the system, he said….

“Farmers are starting to run out of options with what to do with market-ready pigs,” he said by telephone. “There are other pigs that have been born that need to get into that barn space.”

Hog farmers don’t have the facilities to hold the animals and when they grow too large to be handled by packers, growers don’t have much choice, said Steve Meyer, an economist at consultant Kerns & Associates.

Chickens are also on a time-sensitive production schedule. From the Wall Street Journal:

At Costco, Mr. [Jeff] Lyons is focused on supplies of pork and chicken, which the chain requires to be raised and processed to certain specifications. Those industries inherently have less room for closures or surges in sales in their supply chains because animals are bred in precise quantities to meet expected demand, he said…..

For chicken, where Costco specializes in boneless, skinless breasts that are 99% fat-free, the company is working with plants to temporarily supply those products for additional days each week, Mr. Lyons said.

Egg farmers have been destroying eggs for the past month. Cattle ranchers don’t have this problem since they typically have enough feed lot space plus ability to change their feeding to delay their “time to slaughter” window to have more latitude. The Hill described more lost food output:

Some $5 billion of fresh fruits and vegetables have already gone to waste, according to the Produce Marketing Association, an industry trade group. Some dairies have been pouring thousands of gallons of milk down the drain.

And the situation is likely to get worse. From the Journal:

Last week U.S. beef production fell 24% compared with a month earlier, with pork off 20% and poultry down 10%, according to estimates from CoBank, an agricultural lender….

Meat inventories are likely to become tight within two weeks because of the recent processing-plant closures, and temporary shortages are possible, said Pat LaFrieda, chief executive of his namesake meat wholesaler, based in New Jersey.

In a new paper, Who is likely to go without food in the looming supply crisis? Markit identifies additional choke points:

Principal supply issues
Not enough labour to harvest the crops. This is partly due to transport problems (see below) and partly because of lockdowns…India has discovered that it is easier to lock people down and get them to return to their home towns and villages than it is to get them out again….

Also, if social distancing is practised, yields go down unless you add many more staff. That, of course, adds to costs.

Primary and further processing has exactly the same problem. At the simplest level, if you space staff on a conveyor belt two metres apart instead of one, you effectively halve your production rate. Either you work extra shifts or you add extra lines, again raising prices….

Meat
US farmers are sending all their herds to early slaughter because the catering market is dead and so, at the most basic level, nobody in the US is going out for steak & eggs or a nice bacon and egg breakfast in a diner. It takes time to rear cattle to ideal slaughter size and age (less time for pigs and poultry) and farmers are unlikely to start rearing until they are certain that there will be a market for the meat when the time comes, so there will be a gap of several months. Frozen meat will make up for some of the shortfall, but beef prices are likely to soar.

Oil
The crude oil price is now negative. In addition, the ethanol market is dead….As nobody’s making ethanol, that means a shortage of animal feed because after fermentation, the mash is dried, pelletised and fed to animals.

The entire (short) piece is worth reading, because it reaches grim conclusions for much of the world,, including food riots in cities with large slum populations.

A less obvious but still important factor in the comparatively pampered US is that more eating at home means different eating patterns. Someone who grabs ethnic fast food for lunch isn’t likely to attempt that in his kitchen. And a lot of people aren’t good at cooking, so Lord only know what they’ll wind up subsisting on.2 That’s why ground meat is so popular: it is versatile and fault tolerant.

Even though, at least for now, most consumers can find substitutes for missing or newly-pricey items, higher food costs plus a massive increase in unemployment and cuts in hours means more hunger. The chart below is from the Journal; the text is from The Hill: 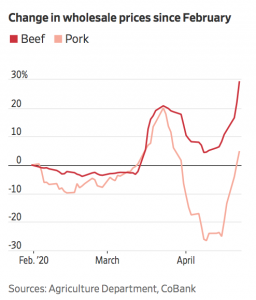 Even before the pandemic began, 37 million people were considered food insecure, according to Monica Hake, a senior research manager at Feeding America, a hunger-prevention group.

The economic downturn from the coronavirus is only set to make that number rise.

In late March, Hake projected that a 7.6-point rise in the unemployment rate would increase the number of food-insecure people by 17.1 million.

So far, more than 20 million people have applied for unemployment, which economists say translates to a roughly 15 percent unemployment rate, up 11.5 points from before the pandemic.

That unemployment figure is a day stale. It’s up to 26 million with Thursday’s new claims data. Google confirms the level of distress. Before, if I put in “unemployment,” I’d get recent business news stories. Now I get this auto fill plus a map of the nearby unemployment offices: 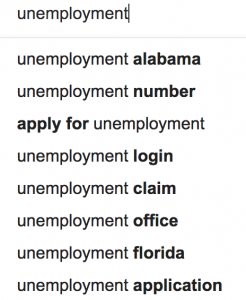 Needless to say, this take is far too cheery:

Food Shortages? Nope, Too Much Food In The Wrong Places https://t.co/r7e2Z5FUdi

If food is being thrown out, it’s hard to depict as just “being in the wrong place”:

Farmers in Idaho are dumping their potatoes. ? I went to Picabo today to see the discarded pile (and pick up a bagful). Commercial demand has fallen, and there is no market for the extra potatoes. ? pic.twitter.com/7MLLeIigmC

Needless to say, the bigger problem now in the US is that many people have no new cash coming in, as opposed to food scarcity. In other places, the situation is far more acute and even less likely to get better soon.

1 One reader decided to get 200,000 calories in his home. He noticed how some storable high calorie items like bulk quantities of rice and nuts went begging compared to pasta. “It’s if if they’re planning for a snowstorm, not a drought.” He also went long cooking oil and flour.

2 Before you get judgmental, even for low income people, buying prepared food often is all in cheaper than cooking. And to cook adequately, you need not to live in a food desert (as in have access to some affordable fresh vegetables), have kitchen equipment, and spices. One of my relatives who had a kitchen fire found the spices she’d lost cost over $1000 to replace.