By Sharon Kelly, an attorney and freelance writer based in Philadelphia. She has reported for The New York Times, The Guardian, The Nation, National Wildlife, Earth Island Journal, and a variety of other publications.Originally published at DeSmogBlog.

The oil, gas, and petrochemical industries have taken a massive financial blow from the COVID-19 pandemic, a new report from the Center for International Environmental Law (CIEL) concludes, but its financial troubles preexisted the emergence of the novel coronavirus and are likely to extend far into the future, past the end to measures aimed at curbing the spread of the disease.

“Oil and gas are among the industries hardest hit by the current economic crisis, with leading companies losing an average of 45 percent of their value since the start of 2020,” the report finds.“These declines touch on nearly every facet of the oil and gas sector’s business, including the petrochemical sector that has been touted in recent years as the primary driver of the industry’s future growth.”

That’s to some degree because of the abrupt plunge in demand for oil resulting from shelter-in-place and quarantine measures that, as of early April, applied to over 3 billion of the world’s 7.8 billion people — including 90 percent of the United States. And the United States uses an outsize amount of gasoline — in 2017, the US consumed one fifth of the gasoline used globally, the report notes. Nearly 70 percent of petroleum products are consumed for transportation, the report adds — meaning that the impact on demand resulting from quarantines is enormous.

But, before the pandemic, oil, gas, and petrochemical firms “showed clear signs of systemic weakness,” CIEL’s report says, listing factors like the industries’ poor stock market performance, high levels of debt, competition from cheaper renewable energy, slowing growth in demand for plastics, and growing awareness among investors of the impacts that action to slow climate change will have on the sector.

“The crash that we’re seeing in the oil and gas and petrochemicals industry is a recent intensification of what has been a very long-term trend,” said Carroll Muffett, president of CIEL. “If you look back over the last 5 years or more, we’ve seen the oil and gas industries significantly underperforming the broader Dow Jones on a long-term basis.”

The report includes recommendations that result from the industries’ prolonged struggles to satisfy investors.

“Public officials taking policy action to respond to COVID-19 and the economic collapse should not waste limited response and recovery resources on bailouts, debt relief, or similar supports for oil, gas, and petrochemical companies,” it concludes. “These efforts may succeed in diverting significant public resources to the sector and delaying the clean-energy transition; however, they are very unlikely to reverse the underlying trends driving the long-term decline of the oil, gas, and petrochemical industries.”

CIEL also noted that pension plan managers and other institutional investors have legal duties that may force them to keep an especially close eye on any oil, gas, or petrochemical projects in their portfolios.

“Because many investors, including pension funds, which are the largest category of equity investors globally, have fiduciary duties to their beneficiaries, they have legal obligations on top of the financial incentives to maximize profits: they must also reduce risk,” the report says. “As the risks of investing in the oil and gas sector become ever more apparent, more and more investors subject to fiduciary duties will likely choose to steer clear of these companies.” 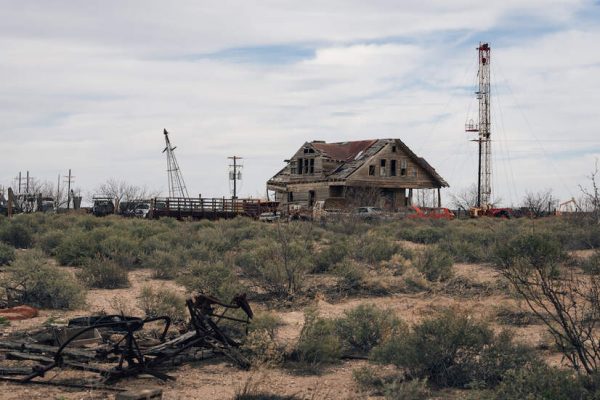 A drilling rig on a former ranch outside of Bartsow, Texas in the Permian Basin.

The report notes that even before the pandemic began, global oil production was outpacing demand at a striking rate. “The International Energy Agency estimates that the oil industry had 2.9 billion barrels of oil in storage by the end of January 2020, just slightly below its all-time peak,” CIEL reported. “With government stockpiles holding an additional 1.5 billion barrels, roughly 4.4 billion barrels of oil were sitting in storage even before the first shutdowns of large sections of the economy began.”

“What is really critical to recognize is that that supply glut pre-existed the current crisis,” said Muffett.

That glut comes in part from the past decade’s rush to drill for shale oil and gas, which left many drillers deep in debt at the end of 2019. Oil giants wrote down billions of dollars in assets at the end of last year, the report notes, including an $11 billion write-down by Chevron, much of it tied to the company’s Appalachian-region shale gas acreage, which left the oil giant with a $6.6 billion loss for the quarter.

By 2025, over $200 billion of debts amassed by the oil and gas industry are scheduled to come due — including $40 billion that the industry must repay this year alone.

Much of that debt already looked risky going into the crisis.

A new Friends of the Earth (FOE) report, titled “The Big Oil Money Pit,” highlighted the ways that the federal bailout of the high-yield market could allow energy companies “to benefit disproportionately” from efforts by the Federal Reserve to use $75 billion of a “$500 billion corporate slush fund” to buy corporate debt.

“High-yield” debts generally offer investors higher returns because of the higher risks associated with that debt.

“FOE’s report identifies a dozen shale drillers that might qualify for that federal bailout, including Apache, Devon Energy, EOG Resources, and Pioneer Natural Resources, estimating that the 12 firms might qualify for over $24 billion in benefits a piece. ExxonMobil, Chevron, and Conoco, it estimates, could qualify for an additional $19.4 billion.

The report notes that some of the fine print in the bailout plan makes Continental Resources — the company founded by Trump advisor and confidant Howard Hamm — eligible for federal support despite the fact that S & P downgraded its debt to junk-grade on March 27, 2020.

Even companies that don’t qualify for that federal support could receive help from another piece of the bailout plan, FOE  adds.

“Because the junk bond market is now 11 percent energy companies (predominantly oil and gas), any attempt to bolster the entire sector is going to benefit heavily indebted frackers,” the report predicts.

“The thing to keep in mind is that in the world of high-yield debt, the oil and gas industry is actually the single largest issuer of junk debt,” said Lukas Ross, senior policy analyst at FOE.

“The big question is, can the oil and gas industry convert its political power into economic survival,” Ross added.

Pollution and the Pandemic

Oil, gas, and petrochemical lobbyists have sought a broad array of other government responses to the pandemic, as highlighted by a third report, recently released by UK think tank InfluenceMap.

“It’s not just financial bailouts that are underway, there’s regulatory intervention,” said Dylan Tanner of InfluenceMap. “The rules of the game in many ways are changing.”

The industries have sought the rollback of pollution controls in many countries as a part of the response to the COVID-19 pandemic, the report notes, including requests to curtail or delay programs designed to cut climate changing pollution.

Journalist Amy Westervelt at Drilled News has compiled a tracker of climate change-related rollback efforts in the U.S., at both the federal and state levels, and in other countries. It includes the announcement by the Environmental Protection Agency that it would not penalize “violations of routine compliance monitoring” resulting from COVID-19, exceptions from the Toxic Substances Control Act for chemical manufacturers, and a pending rollback of pipeline safety rules.

At the same time, ongoing pollution from the oil, gas, and petrochemical industries may also be making the impacts of the pandemic worse, health experts say. 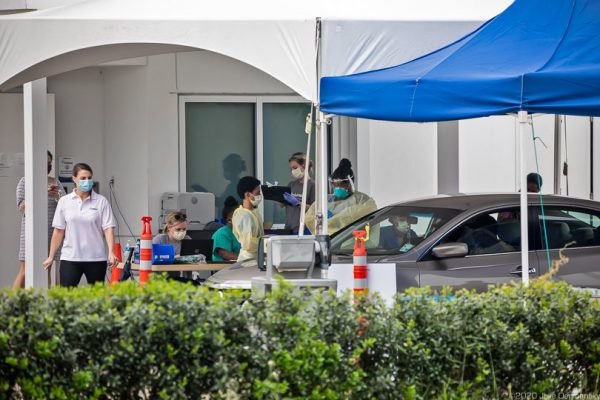 The tiny parish, one of two profiled by DeSmog’s Julie Dermansky this week, is in the heart of Lousiana’s Cancer Alley — an area along the Mississippi River that’s densely packed with petrochemical plants and oil refineries.

“They’re already very vulnerable,” Wilma Subra, a chemist and MacArthur genius grant fellow, told Dermansky, referring to St. John the Baptist residents living near one plant. “Add the long-term exposure of toxic chemicals to the virus, which has a huge impact on the lungs, then they are much more apt to get it and then to have very detrimental effects.”