Yves here. I hate to be a sticker regarding this fine Earth Day tribute….but it’s not as if getting to a coronavirus vaccine is a given.

By Tom Toro is a cartoonist and writer who has published over 200 cartoons in The New Yorker since 2010. Originally published at Yale Climate Connections

Well, sort of anyway, “happy” being a relative term in these extraordinarily turbulent times.

This no doubt will be the strangest Earth Day: Each day since the start of the global coronavirus pandemic took hold may qualify as the strangest … until tomorrow comes.

That said, past Earth Days have brought together large assemblies of persons across the globe to celebrate our planet and fight for its continued wellbeing. None of that this year, please, other than digitally and with all due respect for the critical need for physical and social distancing. (Think Andrea Bocelli singing “Amazing Grace” in an empty courtyard in front of Milan’s Duomo Cathedral this past Easter Day.)

In the personal confines sequestering many of us this April 22, it will be important to acknowledge some inarguable conclusions:

And that short listing doesn’t even begin to acknowledge the victories gained – the pollution and environmental degradation avoided – as a result of the January 1970 enactment of the National Environmental Policy Act, with its provisions for environmental impact statements. A modern world without NEPA? I’d rather not, thanks.

None of which, by the way, is intended to suggest that any of those statutes, nor the vast and complex implementing regulations under them, are “perfect.” Far from it. Nor does it suggest that the battles are won, the gains so far achieved irreversible. Farther still. Created as they were by fallible beings, working always in a political and imperfect system, valid criticisms apply across the board. Overly litigious? Check. In some cases convoluted and imprecise? Got it. Idealistically ambitious in some cases (think “zero discharge” by 1977 under the Water Act)? True. Shortcomings abound.

But that’s OK, and in the end a tribute to and not a criticism of these five decades of accomplishment and aspiration since Earth Day One. 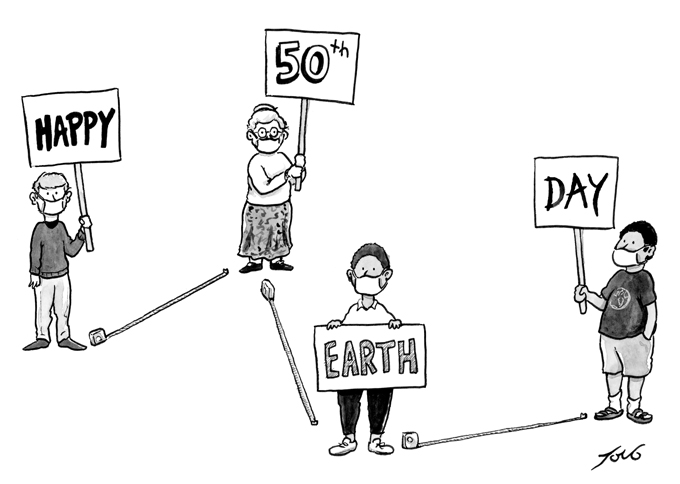 And oh, the ironies. This year’s Earth Day will be observed throughout much of the U.S. and the world in a period of unusually clean air and clear skies, distant horizons now visible in the absence of the smog and air pollution long endured in many places as being normal. Think here of a New Delhi resident’s for the first time seeing the majesty of the Himalayas, the smog temporarily abated. Those air pollutants, as with those responsible for global warming, are diminished substantially, but certainly only temporarily: They’re gone as a result of the dearth now of what many have now come to abide, however reluctantly, as “normal,” the detritus from routine air and highway miles traveled daily by millions domestically and billions worldwide.

The cleaner air bonanza afforded us by the constraints imposed by the coronavirus realities – SPOILER ALERT: another irony here – comes during the tenure of what must clearly be regarded as the single most anti-environmental presidential administration of any in U.S. history. That characterization applies to, and beyond, the highly controversial targeted evisceration of regulations and policies aimed over the past three-plus years specifically at the preceding administration’s climate change efforts. But it applies nowhere more than in the climate change context. And that’s notwithstanding this President’s protestations to the contrary, including his saying he is “an environmentalist.” That clearly is – what does one call it? – “fake news.”

It will be ironic too, won’t it, if year-end official atmospheric data show calendar year 2020 to have measured the most progress in reducing carbon dioxide emissions? Or perhaps even if data at the end of this administration’s tenure show major declines in greenhouse gas emissions? The irony is gobsmacking but the likelihood highly possible. Prepare for it.

In the end, this 50th Earth Day will come. And go. That much is clear. What is far less clear at this point is the potential impact, physically and psychologically, that the eventual post-coronavirus era will have on public and political attitudes toward addressing the climate challenges still confronting the planet. Will the 60th, or 70th, or even centennial celebration of Earth Day find the coronavirus lessons fully learned and applied to climate change? Will the global climate by then have been healed, or still ailing and even far more so?

Perhaps, just perhaps, the world’s people and their leaders at all levels will have come together well before then to confront and overcome the perils of global warming, just as they certainly must come together soon to defeat coronavirus.

If only doing so were as simple and as straightforward as developing and providing a vaccine.