Yves here. I am featuring this post on Mauritius in part due to Colonel Smithers, but also because the way Mauritius responded to Covid-19 really puts the US to shame. On the one hand, they did have the ability to cordon themselves, even though that came at the high cost to their substantial tourist industry. On the other hand, they also quickly organized a number of relief programs, including food distribution to the poor and housebound.

When they are strict and prolonged, the public health and social measures to contain Covid-19 have proven difficult to respect. This column gives evidence of the different outcomes, as of 23 May, across a sample of 20 tourist-dependent island states with populations of between 100,000 and 10 million. If tourist-dependent islands have been hit hard by the shock, most have fared well, particularly those – like Mauritius – that acted early and imposed a strict lockdown.

The pandemic brings new information every day.  Factors contributing to the large differences in trajectories are the subject of intense investigation (e.g. Helsinki Graduate School of Economics Situation Room 2020).  This column summarises findings from our study of island states that have received relatively little attention (Melo et al. 2020). We cover the Mauritian case is covered in some detail, and compare it with 19 other island states from Our World in Data (OWD) with populations in the range of 100,000 to 10 million. The sharing of common characteristics across islands, limiting the sample to islands not exceeding 10 million people, is a first-pass crude attempt at ‘apples versus apples’ comparisons.  Since some islands still have active cases, this is a progress report. We start with Mauritius, which closed all cases within 40 days (but see concluding paragraph), and then show that other islands that acted early, taking tough lockdowns with relatively long containment periods, have exited recently.

Mauritius followed the ‘Act fast. Act now. Keep the lights on’ approach rather than the act slow, immunisation strategy followed by Sweden and, to a lesser extent, the UK. The health authorities followed the contact-tracing route. Figure 1 shows no active cases as of 17 May, with the last reported case on 25 April. Tests have been carried out on approximately 8% of the population, placing Mauritius in the top 7% in the OWD database and first in Africa with respect to COVID testing. With 10 deaths, the country’s naïve case fatality rate (CFR), a standard estimate of the lethality of a pandemic, is 3%. Notably, the low death rate during the first quarter was helped by the lower death toll from road accidents.1

Notes: (1) WAP: Work Access Permit; (2) WFH: Work From Home; (3) WAS: Wage Assistance Scheme. The scheme targets businesses in the private sector and their employees drawing a monthly basic wage of up to Rs 50,000; (4) SEAS: Self Employed Assistance Scheme. The aim of the scheme is to assist self-employed persons who have suffered a loss in revenue as a consequence of the lockdown.; (5) *Customers are allowed to enter supermarkets as per alphabetical order on specific days. They must have their national identity cards and wear masks. Basic essential products are also limited to three units per person.

Baldwin (2020) views containment policies as balancing infections and tolerability. Public health and social measures must stay in a ‘corridor’ where they are stringent enough to avoid overwhelming hospitals, but lax enough to avoid exceeding citizens’ tolerance levels.

Figure 1 shows the timeline of the containment measures in Mauritius. The combination of preventing foreign travellers early on and the stay-at-home measures have prevented overload of the healthcare system – by reducing what Pueyo (2020) calls ‘seeding’ and ‘spreading’.  Screening started on 22 January, with suspected tourists quarantined. These precautionary measures must have contributed to a relatively small pool of ‘suspected’ when the first three cases were announced on 18 March. Two days later, a strict lockdown (only health and essential workers could leave their residences) was put in place for seven days.2 A reopening of supermarkets was allowed under strict conditions from 30 March. The lockdown was extended twice until 1 June, with the re-opening of the economy taking place in phases, starting with government services and other essential services on 15 May. Cabinet and health officials aired daily progress reports every evening in the three languages (creole, French and Hindi). People were warned of severe penalties for breaking the confinement measures and for issuing false news.

Daily press communiques by the COVID National Communication Committee helped calm the population. At the start of the lockdown, the government announced the immediate distribution of 35,000 food packs to families in poverty (as per the Social Register of Mauritius), to the disabled and to at-home residents.  All labour contracts set to expire this year were extended through to December 2020. Wage and income support measures to employers were introduced, ranging from US$125 to $315 for workers with salaries below $625 (15 days’ salary basis) per month to $315 for those in the $625-1,300 range (through the Government Wage Assistance Scheme). Workers earning over $1,300 received no support.  Self-employed individuals as well as trade persons in both the formal and the informal sector received financial support of U$130 (equivalent to half of the monthly national minimum wage) through the Self-Employed Assistance Scheme (SEAC). These measures were extended until 31 May.  The government also announced about 1.6% of GDP increase in spending along with extra tax deductions for SMEs.

Mauritius does not have unemployment insurance, but free health coverage is universal and all citizens over 60 receive a pension of around $300 per month. These social support measures compare favourably with those provided in higher-income countries.

Hit hard by the fall in tourism receipts, estimated to result in a reduction in GDP above 10% for 2020, Mauritius was successful in eliminating the spread of Covid-19 in 40 days. The government acted early and decisively at the outset. Stringent policies aided by geographical factors contributed to meeting the health constraint. Substantial income support contributed to meeting the wealth constraint, keeping the country in the narrow ‘stringency corridor’.

How Unique Is Mauritius? Comparisons With Other Islands

Figures 2-5 compare episodes across 20 islands, from the start of the first declared case in each country up until 23 May. Data are spotty. Figure 2 reports data on country characteristics (population and per capita GDP), estimates of total tests per 10,000 where available, total cases per 10,000, and the value of the composite ordinal Stringency Index (SI) on containment and closure measures (the Oxford COVID-19 Government Response Tracker, OXCGRT) at the end of the first week of reported cases. Figure 3 compares the SI index against the measure of mobility reported in the Google mobility tracker at the end of week 1 and week 4. Figure 4 reports a crude estimate of lethality – namely, the case fatality rate (CFR). Figure 5 reports the evolution of closed cases (recovered plus deaths over total cases) on a weekly basis.  At best, available data allow for caveat-ridden comparisons.

As an example of diversity across islands, Ireland and New Zealand, with similar populations, had their first cases one day apart. Neither tested extensively, but New Zealand started with more restrictive policies, ramping up with yet more restrictive policies as reflected in a greater reduction in mobility (Figure 3). Figure 4 shows that Ireland has the highest number of cases and is among those with a high CFR. By contrast, New Zealand has both few cases and a low CFR. Contrast also Puerto Rico (2.8 million) with Bahrain (1.7 million). Puerto Rico has fewer cases but a higher CFR than Bahrain, the lowest in the sample.

Next, compare ‘successful’ countries. Fiji reported 18 cases, no fatalities and has only 3 active cases (Figure 5).  With a CFR of 0.5% (Figure 3), Iceland, an early reporter, is among the most successful. It succeeded with the combination of the highest testing rate and relatively loose containment measures (the lowest SI score after 2 months, possible because randomised testing allowed the infected to be isolated).

Figure 2 Anatomy of Covid-19 in island nations (populations between 10,000 and 10 million)

Figure 3 plots the value of the SI index against the average reduction in weekly mobility relative to the average during the month of January for two dates: week 1 and week 4. This is a first check of the effectiveness of measures to prevent ‘spreading’. The association is strong for both periods (0.91 and 0.93), confirming that the SI value is a useful proxy of the strictness of containment measures as captured by aggregate mobility.

Source: Authors’ Calculation from Oxford COVID-19 Government Response Tracker, 2020 and Google Mobility Report 2020.
Notes: (1) Data on mobility is the average reduction in mobility relative to the reference period (average over Jan 3 to Feb 3).  SI index ranges from 0 and 100. Higher values indicate stronger confinement measures.  (2) Data on Mobility for Singapore is taken for the 6 weeks after the first Covid case. (3) No SI data for Bahamas, Guinea Bissau, Fiji, Haiti, Maldives, Malta, and Sao Tome and Principe. (4) No data on Mobility for Bahamas, Iceland, Maldives, Cuba, Cyprus and Suriname

The SI was low for all countries in week 1 except for Puerto Rico and Mauritius. However, for Puerto Rico, a pronounced reduction in mobility was only registered in week 4.3 Second, except for Mauritius, all countries ramped up restrictions between week 1 and week 4. This was accompanied by a decrease in mobility from 10-20% to 70-90%. ‘Stay-at-home’ was greater than in the US, which registered a 30% decline in mobility over the same period. Third, Mauritius is the only country that put the brakes on immediately, relaxing restrictions marginally by week 4.

Figure 4 gives an estimate of the lethality by reporting the CFR based on total confirmed deaths. This is a crude estimate of deaths because cases will have gone undetected (not tested or tested but returning a false negative) and deaths are recorded differently across countries. Still, the cluster of countries with 10-20 reported deaths suggests that these late comers in the pandemic have managed to contain the spread relatively well. The figure also shows a large range in CFR estimates. Assuming that Iceland, Cyprus, Malta, New Zealand, Mauritius and Singapore have the more reliable estimates cases because of more extensive testing, even if was not random (except for Iceland), still leaves a very wide range (0.25% to 3%) of CFR estimates. 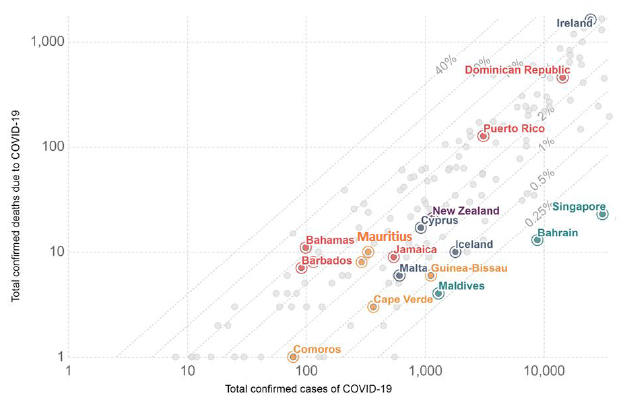 Source: Our World in Data, 2020
Note:  Due to no reported deaths, Fiji is not in the figure.

Figure 5 shows the evolution of closed cases (recovered plus deaths over total cases) on a weekly basis. On the top, starting from the left, a group with a smooth weekly progression path features Iceland, Mauritius, Trinidad and Tobago and New Zealand and Fiji. Indicators suggest these countries have controlled the spread and exited. Ireland and Malta still have many cases but appear to be on the path of closing cases, though with a high CFR for Ireland.  Malta (CFR of 1%) and Cyprus (CFR of 2%) have managed relatively well. Maldives shows new cases, probably a result of increased testing. Singapore, well-covered in the press, is an example of spreading through close group contacts in a high-density environment. The others are still active. 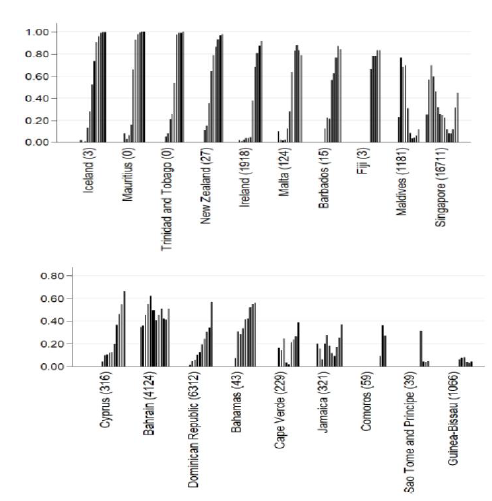 Source: Authors’ calculations from Worldometer
Notes: Weekly averages since week of first reported case. Number of active cases as of 23 May in parenthesis

As a reminder that this is a ‘work in progress’, as we were finalising this column on the evening of 24 May we learnt that two passengers on a return flight from India to Mauritius on 10 May tested positive in quarantine on 23 May. These passengers had tested negative before leaving on 9 May and again during quarantine. It was only on the second and last test before exiting quarantine that they tested positive. This news has not been well received by Mauritians, who were already pleading with the government that, with no new cases since 25 April, the containment measures should not be continued until 1 June. Navigating the health and wealth constraints is also proving difficult on islands!

Editors’ note: This version of the column, written on 24 May, replaces the original version written on 17 May. A shorter, wider-audience version appeared in Le Defi Media Group on 20 May.