Needless to say, the Swedish experience (and its central bank’s abandonment of its experiment) supports the Fed’s priors.

Bear in mind that the Fed not being on board with negative policy rates does not mean Mr. Market might not shift in a panic into negative interest rate terrain for some instruments. Given the previously-unthinkalbe spectacle of negative prices for WTI contacts, coronavirus dislocations can create all sorts of anomalies.

Negative interest rates were once seen as impossible outside the realm of economic theory. However, recently several central banks have imposed such rates, with prominent economists supporting this move. This column investigates the actual effects of negative interest rates, taking evidence from the Swedish experience during 2015-2019. It is evident that the policy’s effect on the inflation rate was modest, and that it contributed to increased financial vulnerabilities. The lesson from the experiment is clear: Do not do it again.

Several central banks have recently imposed negative interest rates, with prominent economists supporting this move (e.g. Bernanke 2020, Lilley and Rogoff 2019, 2020. The Swedish Riksbank was the first central bank to introduce negative rates in 2009 when it imposed a negative deposit rate for commercial bank holdings with the Riksbank until 2010. The main policy rate (the repo-rate) remained positive until February 2015 when the Riksbank then lowered it to -0.10%. It was further reduced to -0.50% in 2016, a level maintained until January 2019 (Figure 1). The negative repo-rate was finally abolished in December 2019. Among the five central banks with negative policy rates in recent years, the ECB, the Danish Nationalbank, the Swiss National Bank, and the Bank of Japan, the Riksbank was the first one to leave the negative territory.

It is too soon to make a full assessment of the long-run effects of the use of negative rates. However, we can already observe some of the short-run consequences. Here, we focus on how the negative rates have affected the Swedish economy during the period running from 2015 to 2019. 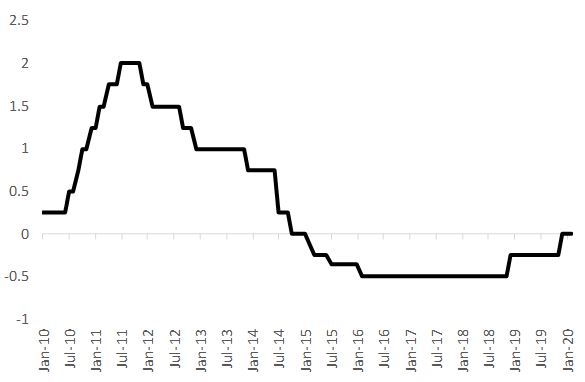 After the Global Crisis of 2008, the Swedish economy recovered rapidly in the second half of 2009. Real GDP surpassed its pre-crisis level in as soon as 2010. Inflation rose above the Riksbank’s official inflation target of 2% (Figure 2). Strong growth and higher inflation caused the Riksbank to begin to normalise its policy by gradually raising its policy-rate to 2% in 2011. However, inflation began to decline following the euro crisis and the weakening of the euro area economy. By 2014, inflation was at 0.5% (Figure 2).

The Riksbank also started to purchase government bonds in February 2015 (quantitative easing), totalling almost 300 billion SEK by 2019, a sum close to 6% of GDP. While the Riksbank may have abandoned negative policy rates, its quantitative easing programme has not yet been reversed.

The Effects of Negative Interest Rates

The Swedish economy is highly integrated with the European economy. Swedish exports as share of GDP increased from 30% during the 1980s (before Sweden’s membership of the EU in 1995) to between 45% and 50% in the 2010s. The Swedish business cycle is thus of less importance than the European business cycle for how domestic inflation evolves in Sweden. As a result, improved economic conditions in the euro area are a greater factor behind the rise in inflation than the Riksbank’s expansionary policy based on negative rates.1 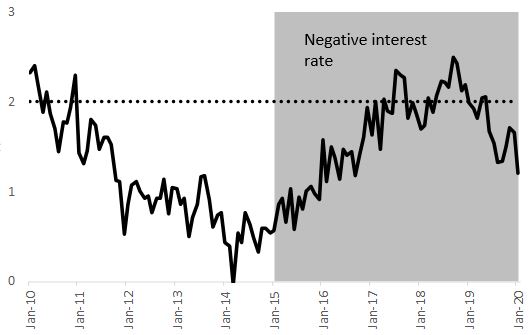 Figure 3 The rate of inflation in Sweden and unemployment in the euro area, 2010-2020. Percent. 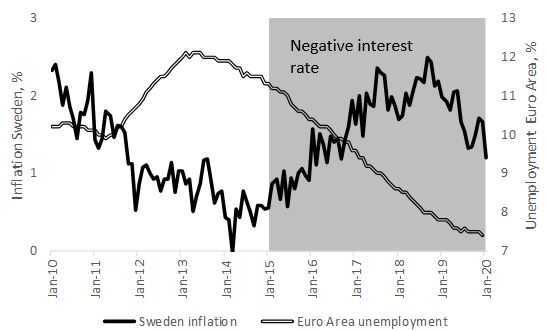 While we argue that the Riksbank’s negative interest rates have had, at most, a minor impact on the domestic inflation rate, we do observe major effects of this type of monetary policy on other parts of the Swedish economy, most prominently on the exchange rate, the housing market, and the level of household debt.

Figure 4 illustrates the change in the SEK/EUR exchange rate (number of Swedish krona per euro) in relation to the difference between the Riksbank’s repo-rate and the ECB repo-rate. During the last five years, the Riksbank has pursued a more expansionary policy than the ECB, despite a stronger Swedish economy in comparison to the euro area economy. This has reduced the value of the Swedish krona from an average exchange rate of approximately 9.25 SEK/EUR between 1999 and 2012, to a rate of 10.50 SEK/EUR presently. During the period with negative rates, the krona depreciated by 20%, from 8.50 to almost 11 krona to the euro. At the most, this depreciation contributed to an increase in the Swedish inflation rate by one percentage point. In the process, Swedish households have become poorer seen in this perspective

Figure 4 Change in the exchange rate between SEK and EUR and the difference between the Riksbank repo-rate and the ECB repo-rate, 2009-2019. 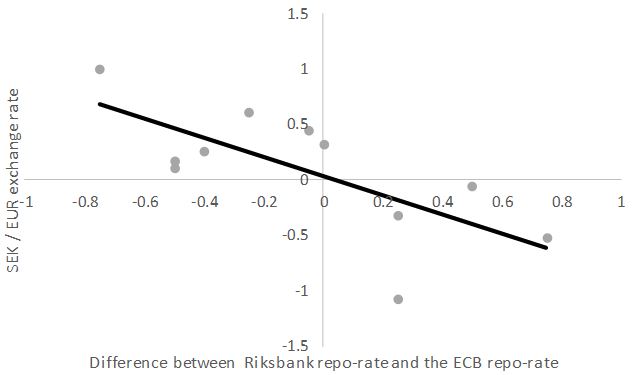 Swedish property prices and household debt levels increased rapidly prior to the Global Crisis of 2008, raising concerns of a future correction and possibly a financial crisis (Andersson and Jonung 2016). Sweden suffered briefly from the crisis of 2008, but no major bank collapsed, nor was the housing market hit during the crisis. The crisis and higher interest rates during the monetary policy of 2010-2011 stabilised house prices (Figure 5) and household debt (Figure 6), albeit at historically high levels.

The lowering of interest rates in 2012-2014 raised property prices in relation to disposable income further. They also rose following the introduction of negative rates (by close to 50% in relation to disposable income between 2012 and 2016). The financial supervisory authority (Finansinspektionen) felt compelled to take action, imposing a string of credit controls on households such as amortisation rules and debt ceilings, beginning in 2016. These controls dampened the rise in real estate prices and in debt. However, they also contributed to growing inequalities as the credit controls were mostly binding for younger households and other households without assets. Nonetheless, the credit controls have not stopped the upward trend in real estate prices. 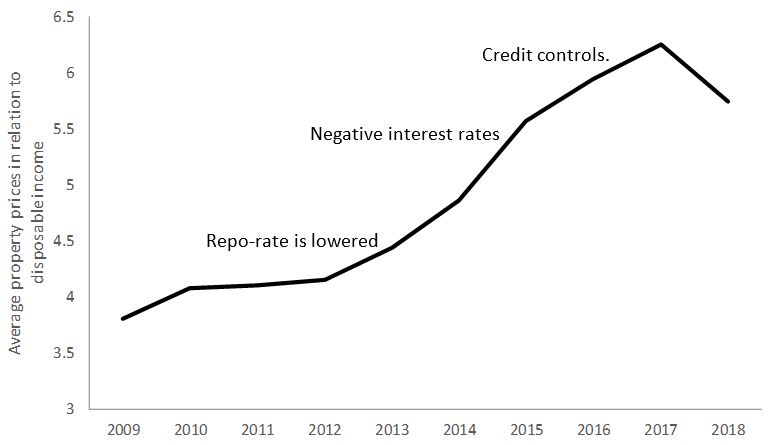 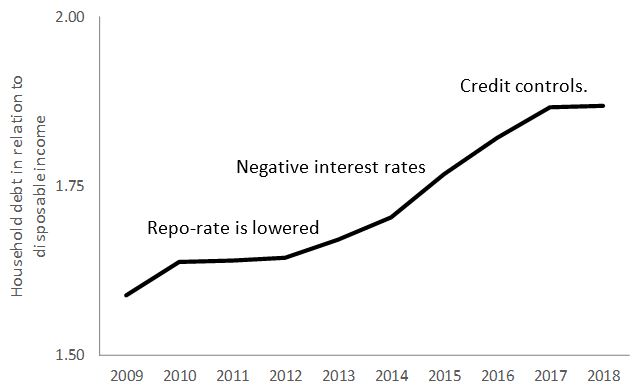 Historically, the Swedish inflation rate has been a good indicator of the business cycle. Inflation increased during booms and declined during recessions. However, the correlation between the Swedish business cycle and the Swedish inflation rate has weakened. While inflation was low in 2014, the economy was booming. Growth was close to 3% and the employment rate for 16-64 year olds hit a record level, at close to 80% (Figure 7). The employment rate was even higher than during the pre-crisis boom of 2008.2 Rather than being counter-cyclical (tightening during booms), monetary policy became clearly pro-cyclical. The Riksbank’s raising of rates in 2019 actually coincided with the economy moving towards a slowdown. 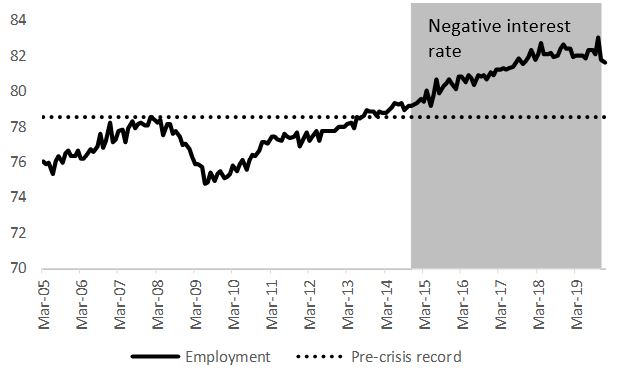 Conclusions
The Governor of the Swedish Riksbank, Stefan Ingves, described the use of negative interest rates an “experiment” never tried before (Dagens Industri 2017). The experiment is now over, at least for the time being. We conclude at this early stage that the costs of negative interest rates to society most likely exceeded the wider benefits.

The Swedish economy is closely integrated with the European economy. Domestic inflation depends more on euro area developments than on domestic conditions. The Riksbank’s negative policy rate has not contributed to a significantly higher inflation once changes in the euro area economy are taken into account. The policy failed to reach the 2% target while creating major imbalances in the process.

While the impact of the negative rates on the domestic inflation rate is small (probably negligible), the effects of negative rates on the housing market and on household debt levels are large. Imbalances which had already begun to materialise before the Global Crisis have worsened. Real estate prices have risen rapidly, contributing to rising wealth inequality. Household debt has reached record levels. The exchange rate of the Swedish krona has depreciated by more than 10%, with no major impact on the domestic rate of inflation. In addition, monetary policy has turned pro-cyclical during this experiment with negative rates, contributing to record high employment. In short, this has created an economy with signs of ‘overheating’. However, this is likely a short-run gain. The Riksbank will face a major challenge to calibrate its policy during the next downturn.

The introduction of negative rates in 2015, coupled with a quantitative easing programme, was motivated by a rate of inflation below the official target of 2%. Although inflation was below the target, there is no evidence that the low inflation rate (at around 1%) has caused any harm on economic performance. The labour market was strong and economic growth was high. The narrow focus on the fixed inflation number of 2% forced the Riksbank into its experiment with negative rates. A more flexible approach to the inflation target, focusing on a tolerance band rather than on a fixed number, would have allowed the Riksbank to take a more nuanced view on the overall macroeconomic stability, rather than just on consumer price inflation stability (Andersson and Jonung 2017).

Of course, we do not claim that everything would have been fine with the Swedish economy if the Riksbank had avoided negative rates. Instead, we suggest that the Riksbank would have faced a better-balanced economy today, better balanced in the sense of less asset price inflation, less financial imbalances, and more room for the Riksbank to react to the next downturn.

The Riksbank law permits the Riksbank to revise the inflation target as economic conditions change. The Riksbank is not required by law to maintain 2% inflation at any cost (Proposition 1997/98:40). Still, the Riksbank chose to experiment with the Swedish economy when it did not have to do so.

Economic policies change over time as policymakers learn from past mistakes and successes. Sweden has served as a laboratory of policy experiments in the past (Jonung 2000, Andersson 2016). The Riksbank, the oldest central bank in the world, has just terminated its most recent experiment. In our opinion, the clear message from the Swedish experience of negative policy rates is: ‘don’t do it again’, at least not when the domestic economy is booming, domestic inflation is determined by foreign inflation, and the financial imbalances are rising through high asset price inflation.