But any pension fund that winds up making private-equity-induced fire sales will have even less of an excuse than during the financial crisis. LACERS (Los Angeles County Employees Retirement System), confessed yesterday that some of the sharp rise in the private equity cash demands results from the public pension fund going along with an idea that enabled the private equity investors to report artificially inflated returns. Not only did we call out the dangers of this product, so-called bank subscription lines of credit, which started to become popular a few years ago, but even storied investor Howard Marks wrote a lengthy piece against their use. But private equity investors have never been good at saying “no,” including to phony accounting.

And even worse, there’s reason to think that private equity general partners, never known for letting anything stand between them and a profit opportunity, are even more than ever taking advantage of public pension fund cluelessness with their latest round of capital calls.

Let’s start with the factoid and then unpack its significance. From Private Equity International in LACERS has steep hike in capital calls (paywalled). Note that Rod June is LACERS’ chief investment officer: 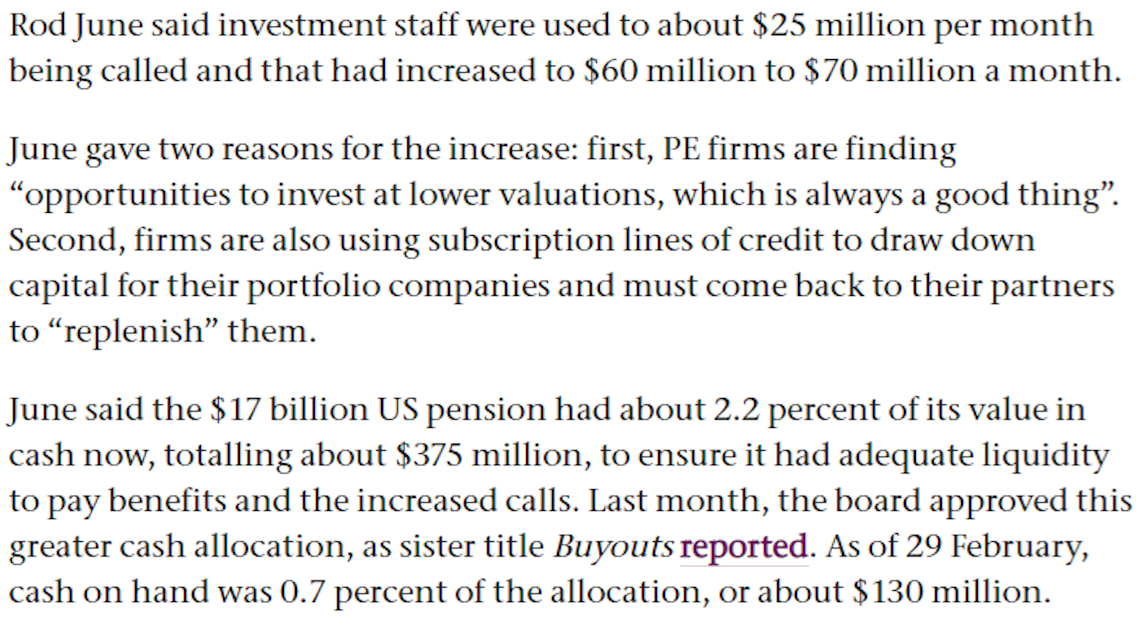 For those of you unfamiliar with “capital calls,” investors in private equity funds do not hand their money over to a fund manager, the way you do with a Vanguard mutual fund or the big boys do when they invest in institutional funds or even hedge funds. Instead they “commit” to a particular dollar amount, which for a CalPERS might be $500 million. The investor does not send any money (except to pay periodic management fees) until it gets a “capital call” to provide a specific amount of money, say $27 million for a particular deal. The limited partnership agreement states how quickly the funds need to be handed over, usually five to ten business days. The penalties for missing a capital call are draconian, usually sacrificing the entire investment in the fund to date.

Pay attention to what June described. He’s admitting to having to scramble to meet the unexpected demand for cash from private equity capital calls, to the degree that he had to more than double LACERA’s liquidity position, from 0.7% (on the skimpy side) to 2.2% in very short time period.

Let’s discount June’s patter. By mentioning “opportunities to invest” first, he’s implying this is the biggest reason for the cash demand. There’s reason to doubt that. As 2008 and the real estate market now show, when markets take a swan dive, sellers with good properties who can stand to wait pull their transaction back to wait for better times. In the financial crisis, private equity firms did make capital calls to pick up distressed debt. There shouldn’t be as many bargains now due to the Fed intervening to prop up low grade credit.

And as to private equity buying weakened companies on the cheap, you don’t catch a falling safe. The coronacrisis is far from over, so sick can become terminal. Badly damaged companies will go into bankruptcy. There may be opportunities to do deals on the courthouse steps, but it seems a little early for that.

While there are no doubt capital calls related to pending transactions, it is hard to think that they have increased enough to be the main drive of the more than doubling in

So what about these subscription lines?

The reason subscription lines of credit are particularly dangerous is that they create leverage on leverage. When private equity fund managers buy a company, they do so with a lot of borrowed money, typically 70% of the purchase price. They company they buy is the borrower, as in the debt sits on its balance sheet and the company pays down the loan from its cash flow or the proceeds of a sale.

A subscription line of credit is borrowing at the fund level, not the company level. As we explained in 2016:

For the last couple of years, we’ve been monitoring a troubling development in private equity, the use of “subscription line financing”. This innocuous-sounding term is for a credit line, offered by a bank, to allow general partners to borrow at the level of the investment fund. This is in addition to the considerable borrowing that already occurs in private equity, at the portfolio company level, where 70% of the purchase price typically comes from lenders.

This practice, which even major players like Bain Capital decry as dangerous, appears to have gone mainstream. As we’ll explain, these credit lines make already-exaggerated returns in private equity look more attractive than they are, not merely through the raw application of leverage but by changing how investment cash flows are reported. And they greatly increase the risk of investing in private equity during financial shocks. That risk obviates out one of the supposed advantages of private equity, that private equity appears to do well in bear markets, when in fact private equity partners are merely providing rosy portfolio values. The more general partners use these subscription lines of credit, the more private equity will amplify investor risks rather than reduce them….

Subscription line financing makes it possible for general partners to borrow at the fund level on a routine basis, as opposed to its previous status as an unusual event. The bank provides a credit line with that borrowing secured not by the assets of any portfolio companies, but by the unused capital commitments of the limited partners. In other words, while these borrowings were expected to be rare and repaid by other means, from the lender’s perspective, legally they are advances against the limited partners’ capital commitments.

A good paper on subscription lines of credit, by James F. Albertus and Matthew Denes of Carnegie Mellon, was published last summer, using data through third quarter 2018. By all accounts, use of subscription lines has risen even more sharply since then. Bear in mind that the authors had to develop a sample and perform their analysis using confidential data. On top of that, industry sources tell us that the outsiders can’t even tell if a particular fund has signed a subscription line of credit agreement. Most if not all limited partnership agreements now allow for their use, and they are disclosed only in fund financials, which the public at large cannot see.

Even so, the article confirmed heavy use by the funds that signed up for them.1 From the Albertus/Denes paper:

We find that there has been a dramatic rise in the aggregate use of SLCs from 2014 to 2018. In our sample, the total amount of subscription lines of credit in 2014 (adjusted for inflation) was just $86.1 million. The use of SLCs in the first three quarters of 2018 increased to more than $5.3 billion….We document that the number of fundsusing subscription lines of credit rises monotonically in our sample. We also report that the average (median) amount of SLC use jumps from $14.4 million ($14.6 million) in 2014 to $ 74.6 million ($19.4 million) in 2018. This evidence suggests that there has been a substantial shift in the source of financing for private equity funds and challenges the assumption that equity is the primary source of capital for these funds.

A potential issue with the contemporaneous increase in debt financing is that it might be relatively inconsequential for a particular fund. To address this concern, we examine the capital structure of private equity funds….Conditional on using a subscription line of credit, we find that the average (median) leverage of a fund increases from 11.8% (11.5%) in 2014 to 31.1% (27.5%) in 2018. This highlights that debt financing is increasing at both the fund and aggregate levels.

Fast forward to today. An industry source has told us that banks are up in arms because private equity fund managers are drawing down all the available credit on their subscription lines of credit. Even though that’s technically permitted, it’s not done. It’s seen as an admission of distress. For instance, Bear Stearns didn’t max out its lines of credit even when it was clearly on the ropes. But private equity kingpins don’t care about appearances.

Some of you may be head-scracthing: “OK, if the private equity fund takes all the cash it can on its line of credit, that’s between the fund and the bank. It’s pre-agreed. How does that generate a capital call to investors in the fund?”

One possibility is that there was a default on the credit line subsequently, although that seems unlikely at this juncture. Vastly more probable is the drawdown led to the breach of a covenant, forcing the limited partners to pony up more cash. Again from the Albertus/Denes article:

SLCs may include arange of covenants. A typical example relates to the ratio of total unfunded commitments to the fund’s total debt.

How, might you ask, does the help the fund? Wellie, it may not help the fund but it sure helps the fund manager, because you can bet it downstreamed the cash to the portfolio companies before it made the capital call, so as not to have enough dough at the fund level to cure the breach.

On top of that, general partners (fund managers) are sucking money out of limited partners (investors) because they can. From an April 15 Private Equity International article, based on a survey of over 200 limited partners conducted by the Institutional Limited Partners Association:

Let’s go back to LACERS. It’s had to go to a liquidity position of 2.2% to give itself enough headroom to deal with private equity money demands. CalPERS, by contrast, took its liquidity portfolio down from 3%, which was well above its asset allocation of 1%, to the 1% level just before the coronacrash. Has it also increased its buffers, as LACERS has, or will it wind up having to dump assets at distressed prices, as it did in 2009? Chief Investment Officer Ben Meng said his plan for dealing with a liquidity crunch was to borrow. From a 2019 board meeting: “One of the ways we generate additional liquidity is put on leverage on the total fund, so we borrow money.”

Good luck with that.

1 It is not inconceivable that for the subscription lines of credit set up as revolving credit lines, as opposed to term loans, that the general partners might even engage in window-dressing at fund reporting dates, paying off the lines in part or in full to obscure how much they are used on an ongoing basis.