“Large populations of educated under-employed people are very very dangerous to the social order” while “Jeff Bezos is having a very good crisis” —  Krystal Ball, Saagar Enjeti and Joel Kotkin discuss how screwed people will be, especially young people, when the active coronavirus era ends.

“What will we break if the next thing that breaks is us?”
—Yours truly

As regular readers know, I’ve been concerned about the “coronavirus endgame” in this country for quite some time. “What will we break if the next thing that breaks is us?” is a question that’s always on my mind (see “Covid by Country — America Leads the Pack“). People are going stir-crazy; I see it all around me and I live in one of the saner cities. Yet we’re looking at a relentless 20,000 new cases per day, every day like a clock, while other, saner nations, France for example, are seeing drops of up to 90%.

Readers of this site already know what the medical outlook will be if the country opens too soon or too quickly (for example, check out “You May Think/Wish You Are Done With The Pandemic… But That Is Not How It Works“).

But the financial consequences of a prolonged coronavirus closure will be even more devastating. In the video above, futurist Joel Kotkin discusses the problems that will be faced by the young, by those in the inner cities, and especially by those who work in hard-hit industries like hospitality. Put simply, a great many people who are currently sustained by unemployment benefits, will lose those benefits while also losing the jobs they expected to return to when the crisis ends.

But the biggest worry isn’t lost current income; it’s the additional overhang of massive private debt, a burden that weighs heavily on almost every adult in the country. How will out-of-work or newly part-time Americans pay their mortgages, their rent, their student debt, their credit card debt, their medical debt? Again, put simply, they won’t.

And if they don’t, what then? It’s a core principle of the Obama era that “no creditor shall be harmed by an economic crisis.” Millions lost their homes in the foreclosure crisis of 2008, but after the collapse of Lehman Brothers, no banker or holder of worthless casino-like derivatives was not made 100% whole, not Goldman Sachs, not AIG, not any of them.

This time round, the government, with bipartisan approval, is already throwing cash at big businesses to keep them afloat — David Dayen calls it a “money cannon” — and this is especially true in the bond market, where the Fed is backstopping almost all corporate borrowing (see this excellent analysis, “Corporate Rescue: How the Fed Bailed Out the Investor Class Without Spending a Cent“). 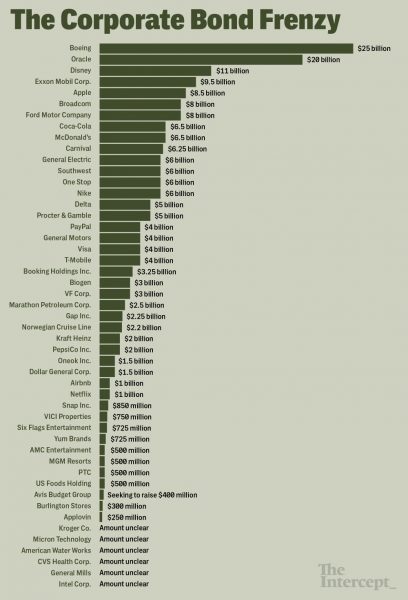 Dayen: “Boeing, the basket-case aircraft maker with a sketchy record of keeping planes in the sky ‘rejected’ a federal bailout after issuing $25 billion in bonds. But that bond issuance was entirely made possible by the Fed’s implicit guarantee of corporate bond markets.”

Yet millions will need help. For example, under the headline “Evictions expected to spike as states end moratoriums that offered relief during COVID-19,” USA Today writes, “Twenty-four states are processing evictions again, and that number is likely to climb to at least 30 states by the end of June.”

Not all renters in those jurisdictions are vulnerable. Nearly 30% continue to be protected by a federal moratorium under the Coronavirus Aid, Relief and Economic Security Act that will remain in place until July 25. The rest … live in properties that are either not subsidized by the federal government or are owned by landlords with loans that are not federally backed.

For these unprotected renters, the threat of eviction is very real – especially for those at the bottom of the economic ladder. Tens of millions of workers are unemployed, and the economy is likely to remain shaky until there’s a vaccine and consumers feel safe enough to travel, dine out and go to theme parks and movies again. Homelessness could come at any time. [emphasis added]

July 25 is close, a lot closer than this year’s election in fact. Millions of “unprotected renters” — and many protected ones — will face eviction by September. Will the government treat these victims like they treated Boeing and backstop their debts by opening the Fed money window wide and often? Or, like the Obama government before them, will the good people in this government keep just the donor class afloat?

The government faces a problem. One solution, an obvious one, is to declare a debt jubilee. After all, it’s rightly said that “debts that can’t be repaid won’t be repaid,” and the economist Michael Hudson has written often that in times like these, the alternative to debt forgiveness is a depression. But there will be no debt forgiveness for actual humans if the “no creditor shall suffer” rule still holds true, and it looks from this government’s actions — Congress and the administration alike — that it does.

So what will the country, its actual people, do then? Your guess is as good as mine, but it may not be pretty to watch — or easy live surrounded by.

What will we break if the next thing that breaks is us? We might break everything we can get our hands on, the collective, stretched-to-the-limit, breaking-point we. And that’s before people go to the polls to vote.