I was reading Consortium News’s reconstruction of Dominic Cummings’ horrid, prehensile clambering up the greasy pole of Tory Inner Party politics to become BoJo’s Chief adviser (“What Made Dominic Cummings Dash to Durham?“), when I came across this astonishing passage (I’ve helpfully lettered the gobsmacking bits in square brackets):

As to the sort of persons whom Cummings says he wants to recruit into government in place of those he wants to sack, he has described them in a post on his personal blog.

As well as the usual emphasis on mathematics and science graduates, the post invites applications from:

We need some true wild cards, artists, people who never went to university and fought their way out of an appalling hell hole, weirdos from William Gibson novels like [A]that girl hired by Bigend as a brand ‘diviner’ who feels sick at the sight of Tommy Hilfiger or [B]that Chinese-Cuban free runner from a crime family hired by the KGB. If you want to figure out what characters around Putin might do, or how international criminal gangs might exploit holes in our border security, you don’t want more Oxbridge English graduates who chat about Lacan at dinner parties with TV producers and spread fake news about fake news.”

Now, to be fair to Cummings, he does not explicitly claim that he’s read either of the two William Gibson novels to which he refers ([A], Pattern Recognition, and [B] Spook Country). However, when Cummings writes “that girl hired by [Belgian advertising mogul Hubertus] Bigend,” as if both he and the reader share an easy familiarity with the character, I think even this humble blogger — and former humanities major, although not at an exalted venue like Oxford — is entitled to infer that Cummings has done the reading. Except he hasn’t. In case [A], “that girl,” Cummings merely displays laziness. In case [B], “hired by the KGB.” he goes grotesquely astray. Case [A] depends on close reading. Case [B] is open and shut. Let’s take each case in turn.

Cayce Pollard, in Pattern Recognition, is “that girl”. Cummings writes:

… that girl hired by Bigend as a brand ‘diviner‘…

And, for that matter, Amazon: 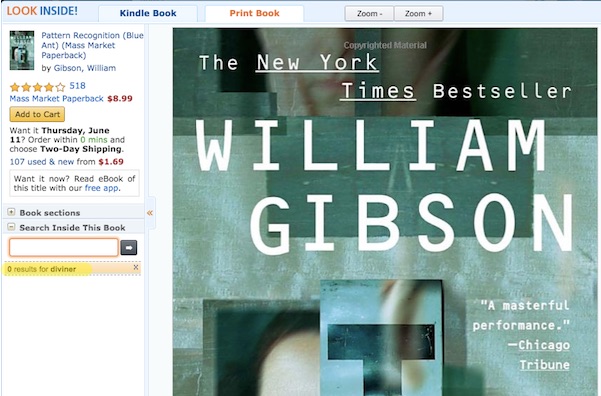 Worse, Cummings’ little fabrication misrepresents Pollard’s talent, as described by Gibson and understood by Cayce and Bigend. Divination, what Cummings’ “diviner” does, is defined by Shorter Oxford English Dictionary as follows:

1. The action or practice of divining; an act of divining; insight into or discovery of the unknown or the future by supernatural or magical means; (an) augury, (a) prophecy.

For sense 1, there is nothing supernatural about Pollard’s talent; for sense 2, Bigend has hired Pollard to pronounce on a corporate logo. He is not hiring her to guess; he is hiring her because she will know. Gibson describes, obliquely, Pollard’s talent and process at the start of the book (pages 10-14 in my paperback):

The new logo will be this firm’s pivot into the new century, and Cayce, with her marketable allergy, has been brought over [to Bigend’s London office] to do in person the thing that she does best…. Doreatea [representing Bigend’s client] removes an eleven=inch square of art board from the envelope [and] displays it to Cayce.

Cayce’s contract for a consulation of this sort specifies that she absolutely not be asked to critique anything…. She is there only as a very specialized piece of human litmus paper.

“It must be difficult,” [Bigend’s representative Bernard] Stonestreet says…. “when you don’t like something. Emotionally, I mean.”

“It isn’t about liking anything, Bernard,” Cayce say… “It’s like that roll of carpet, there; it’s either blue or it’s not. Whether or not its blue isn’t something I have an emotional investment in.”

Needless to say, this is not divination; there’s nothing of the divine about it. Even if one wished to force the issue and compare Cayce’s pronouncements to, say, dowsing, no dowser would ever describe their talent as an allergy.[1]

…. that Chinese-Cuban [sic] free runner from a crime family hired by the KGB

Tito, the “Cuban-Chinese” (Gibson’s ordering throughout) free-runner, is most definitely not hired by the KGB, or — Gibson’s novel being set in the very near future, and the Soviet Union having been dissolved in 1991, the KGB along with it — any organ of Russian state security. Tito has been hired by an American, “The Old Man,” a retired American intelligence agent. Gibson’s plotting is too complex for me to excerpt or explain, so I’ll just show Tito working for Old Man in the operation that drives the book. Page 250 (Amazon): 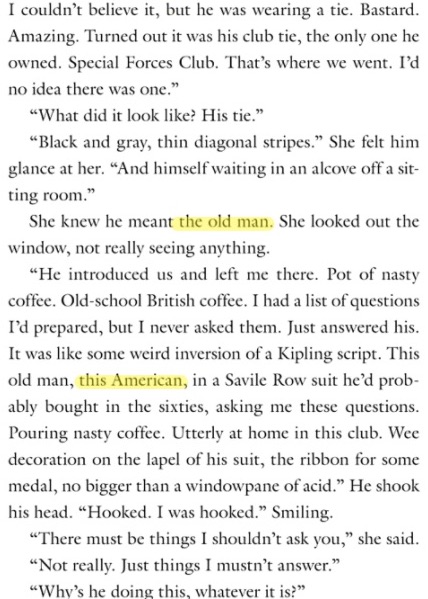 And that the Old Man is from the intelligence community (page 414): 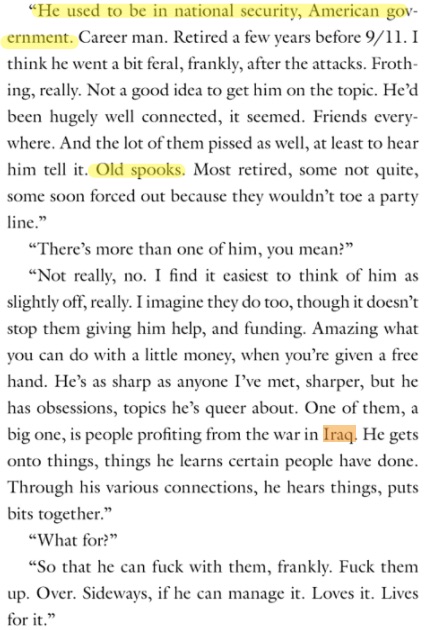 So, as you can see, Tito has been hired by a protagonist who is about as far from “the KGB” as it’s possible to be. Cummings cannot have read — or, to be fair, have finished — the book.

Now, I will concede there’s some room for judgment in Case [A], since — leaving aside the issue of Cumming’s quoting material that doesn’t actually appear — my interpretation is based on a close reading of the text. Not very much room, but some. But for Case [B], there’s no room for judgment at all. Cummings has made a grotesque error. My question: Why?

The passage excerpted comes, after all, from what is in essence a Help Wanted advertisement. Cummings is trying to recruit people into government, his party’s government. One would think Cummings would be writing very carefully. Two explanations come to mind:

(1) Cummings is writing as well as he can. He is lazy and ignorant, hasn’t done the reading, and by the Dunning-Kruger syndome, doesn’t know what he is. So he picked up a few taglines from a Spectator review, say, and plugged them into his deliverable, assuming nobody would call him on his effort to appear more “cognitively diverse” than he really is. Cummings has form; this explanation is consistent with it.

[1] To be fair once more to Cummings, Gibson’s usual envoi includes this passage (page 366). Of Pollard’s “allergy” to logos: “Even the Michelin Man now registers as neutral. She wonders whether this change, whatever it is, will affect her ability to know whether or not a given trademark will work.” So one could work up various theories for why Pollard’s talent is supernatural — a product of her unresolved relation with her dead but oddly communicative father figure, for example. But that’s not how Pollard or Bigend think of it.