The notion that the US approach to handling the Depression-level shock of Covid-19, to shovel cash at the rich and give only short-term, modest help to those at the bottom of the food chain, is hardly news. Nevertheless, a new, detailed, non-paywalled Financial Times story, Why the US pandemic response risks widening the economic divide, does a fine job of laying out how the major gimmies worked and how large their impact is likely to be. This one-stop shopping is important, if nausea-inducing, reading.

But this piece nevertheless seems oddly incapable of drawing conclusions, or more accurately, conclusions commensurate with its data. The authors are concerned about the prospect of even more inequality, but see the impact as low growth. They underplay the fact that the lack of shared sacrifice, and worse, the rich all too clearly getting richer, is a prescription for social upheaval, particularly if unemployment stays very high.

The chart title below is similarly in denial that more concentration of wealth at the top is a feature not a bug, and the corollary is a lack of wealth not just for those at the bottom but the entire bottom half: 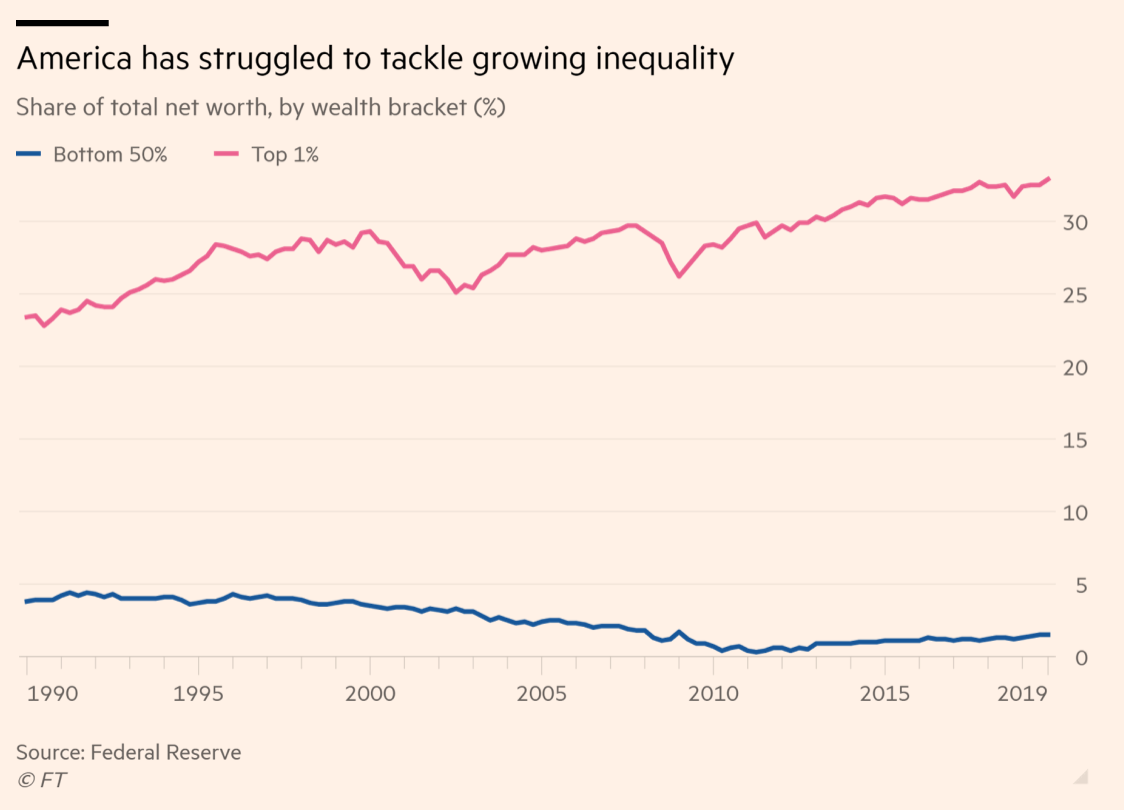 In a system where most people must sell one’s labor as a condition of survival, it behooves the people in charge to provide enough adequately paid work. The importance of that duty seems lost on American elites. Worse, the Trump version is that if people get hungry enough, they’ll have to work. But the officialdom seems not to have sorted out that the “work” available might wind up being the gang member sort.

In keeping, the worst outcome the article envisages is a repeat of the post 2008 “slower recovery, especially in wages, and….a new wave of economic populism.” Can’t they see that differences in degree can and will produce differences in kind?

The big facts: so far, the US has had $3 trillion of stimulus, enough to juice Wall Street and keep most top managers and executives working at home. The middle and lower class have gotten only short-term relief which is set to expire soon. Record high stock prices and the big bounce in retail sales means stingy Republicans don’t want to give the lower orders more dough (not that the Democrats have been paragons of virtue).

Other experts focus on the more mundane but real concern that ending the support for middle and lower income workers will dent the economy. America’s GDP is about 70% consumption and people of modest means consume more of their incomes than the rich, and much more of it is discretionary. From the New York Post (hat tip Li):

The top 25 percent of income earners are responsible for more than half of the nation’s drastic plunge in consumer spending since the start of the pandemic, according to a new study from Opportunity Insights, a Harvard-based research group.

Big spenders cut back most when it came to high-touch goods and services with a bigger risk for catching COVID-19, such as restaurants, hotels and transportation, the researchers found. That had a big trickle-down effect on the businesses and workers that rely on their money.

Small merchants in the most affluent zip codes lost more than 70 percent of their revenue when the virus struck, while those in the poorest areas lost just 30 percent, the study says. The layoffs that accompanied those losses followed a similar pattern — over 70 percent of low-wage workers at small businesses in rich areas lost their jobs within two weeks of the start of the crisis, compared with less than 30 percent in the lowest-rent ZIP codes.

As we noted in our post yesterday, Paycheck Protection Program requirements, that loan recipients maintain payrolls for eight weeks in order to have the debt converted to a grant, are going to start expiring for the earliest recipients later this month, which we anticipate will lead to significant cuts in headcount and hours at smaller businesses.

Only after a lot of stage setting do we get some of the key details on the mechanisms of yet more redistribution to the top:

For individuals, the Cares Act lifted a $500,000 cap on tax deductions on business losses that had only been introduced in 2017, and allowed investors to spread out losses over five years. Steven Rosenthal, a senior fellow at the Urban-Brookings Tax Policy Center, says this “unlimited pass-through deduction”, as it is known, is a “heads I win, tails I win too” scenario for investors in hedge funds and real estate developers, who will now be able to deduct 100 per cent of their business losses to reduce taxes paid on profits made between 2018 and 2020….

A report by the Joint Committee on Taxation found that 82 per cent of those who stood to benefit from these provisions earn at least $1m and only 5 per cent make less than $200,000 annually. The independent congressional watchdog estimated that the tax breaks for those earning more than $1m a year would cost the government $195bn over a decade. 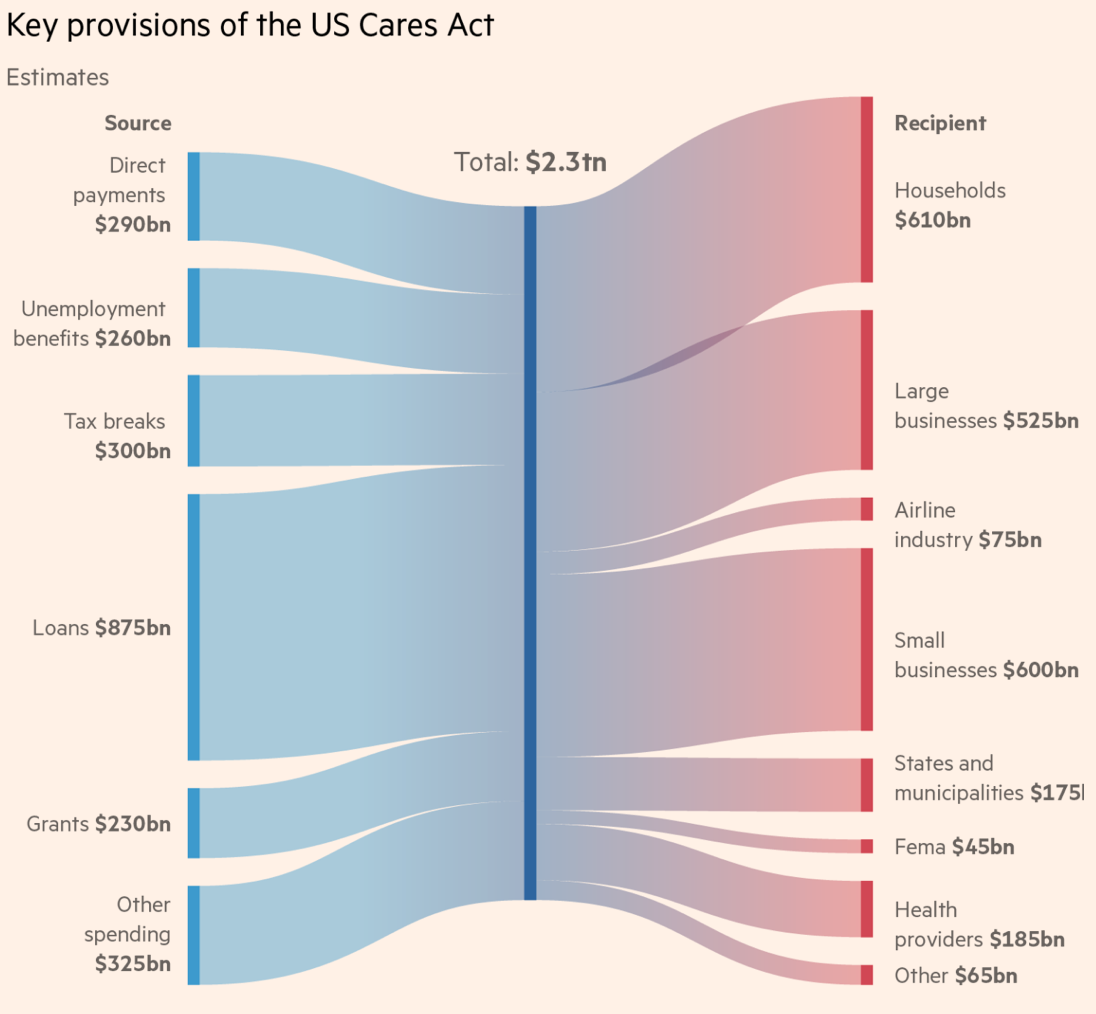 Large companies have also been given the option to carry back losses. The Cares Act will allow them to immediately receive billions of dollars in tax refunds by deducting any losses they made in 2018, 2019 and 2020 from taxable profits over the previous five years.

Other key tax changes have allowed companies to deduct a larger proportion of their interest payments, up from 30 per cent to 50 per cent, and to immediately offset investments made to improve property, a measure for which the retail and hospitality industries have long campaigned….

The changes in the tax code are particularly advantageous for private equity-backed businesses, which sometimes operate companies at a loss, say several tax experts.

The Financial Times also points out that the Paycheck Protection Program was not all it was cracked up to be. Our issue is that eight weeks of payroll support for a small business is long enough only for it to keep employees on as it determines what its economics will be in a Covid-19 world. While that is of some help, for many small ventures, it provided some breathing room while they experimented but merely delayed the inevitable for some (most?) of their staffers.

As the Financial Times observed:

While demand for PPP loans has been strong, even this programme has been mired in controversy over claims it has tilted towards more powerful entities…

Small restaurants and “mom and pop” stores — for whom the aid was intended — have been hesitant to tap it. Some found the restrictions too prohibitive and could not risk having to pay back the loan within two years.

Some of the comments to the story were remarkable, embodying a sense that the system is on the verge of breaking down. For instance:

The US has the weakest social democratic program structure in place of any advanced capitalist democracy. In short, its structure is purpose built to inflict economic impoverishment on the lower half of the income distribution while concentrating gains in the top 1 percent while socializing any asset losses incurred by the largest private corporations. It’s all the politics of “you lose, we win” that has been baked into the system.

Consumer banking and finance must be put into a regulated public utility industrial structure. Trillions in deposits and other financial assets and transaction flow should not constitute a private preserve designed to flow remunerative compensation into a bonus-based managerial class. The entire banking industry must be restructured; it is beyond reform — all experience since 2009 proves that.

Why even pretend that your population is a first-world, advanced economy working and middle class nation when you don’t even have decent universal healthcare and access to quality post-secondary education at public expense.

“Michael Strain, an economist at the American Enterprise Institute, a conservative think-tank, says that ‘Capitalism isn’t broken. The game isn’t rigged. Hard work does pay off. Workers do enjoy the fruits of their labour…'”

But that is untrue. In the US as in Britain, those from wealthy families have the connections to get high paid starting jobs whilst people with real talent from working class families mostly start at the bottom with low pay and many remain in low paid jobs, unable to get promotion beyond a certain level, this keeping their income low. In Britain our current Prime minister perfectly illustrates the point. Most talented journalists earn £12k a year or less as starting salary, precisely because they lack the social and economic connections to earn a lot more for work of questionably probity. The broken or dysfunctional Capitalism that exists in many countries benefits the few at the expense of the majority by practicing state socialism towards the wealthy, capital and corporations, ultimately paid for by the rest. The 2008 crash is ar classic example where the wrongdoers were rewarded (the key wrongdoers should have served prison sentences and been stripped of their assets to compensate their employer) whilst the rest were subject to reductions in welfare, services and had their pay frozen. Hard work does not often result in financial gains or promotion, but rather whether a person’s ‘face fits’ and they ‘play the game’. Groups of people have faced historic economic and other discrimination which continues to have an economic and psychological impact such as skin colour, disability, homosexuality, not holding any religious belief or holding the wrong religious beliefs (teachers in state schools that become religious academies, for example) and people from poorer backgrounds who do not know the cultural norms in many areas of work of appearing to an interview in a dark suit and black socks and shoes.

With the notable exception of the wealthy and families of elites, the practical reality is that Capitalism is broken, rigged and does not reward ability, hard work except in a small number of token cases and ensures that the workers toil in order that others can benefit from their labour whilst they continue to reap the sour or rotten fruits of their labour. What passes for capitalism in the Anglo-American world is in reality its exact opposite when investors in certain vital industries or those with good lobbyists such as investment banking (which should have been separated from the savings of ordinary account holders In 2008) know that however incompetent or greedy their leadership is, the taxpayer will bail them out. Capitalism needs radical reform beginning with ensuring no business is too big to fail and allowing them to go bankrupt and making it a crime for a government to bailout any sector without a referendum where at least 70% vote and of those, at least 55% vote in favour, of any bailout under narrowly specified terms. It need to ensure that all children are educated at the same state schools or educating all children in high performing, frequently checked without warning, well funded private schools with small class sizes and outlawing all forms of nepotism and economic advantage derived from ones social connections, and having a welfare state and state regulation that creates a level playing field. A smaller state with lower taxes is a euphemism for making the rich wealthier and more powerful leaving the poor, more impoverished.

In their pursuit of profit, capitalists have stripped more and more protective measures out of the system, from buffer stocks to maintenance and investment (PG&E as the poster child) and on a societal level, protections for workers to help buy safety from the lower orders. What Minnesota governor Tim Walz said of the George Floyd protestors is true on a more general basis: “There’s simply more of them than us.” People in power need to start feeling that fear, because the structures on which they depend are getting close to the breaking point.