Yves here. To add to Ilargi’s discussion on the long-standing, premature predictions of the death of the dollar:

1. If you look at not-much longer periods (pre-Brexit) the dollar was much weaker against the pound and the euro. So a modest retrace is noise.

2. The US cannot involuntarily default in its own currency. It can create too much inflation. With the massive deflationary impact of Covid-19, that’s not an imminent risk.

3. Being the reserve currency requires getting a lot of currency into foreign trade partners’ hands. That means running trade deficits, as in exporting jobs. China is mercantilist, and sees the point of trade as running a surplus, which is tantamount to importing jobs. So China is not willing to do what it would have to do to displace the dollar.

It won’t come as a surprise to anyone that the first half of 2020 has brought, among many other things, renewed calls for the demise of the US dollar. It’s been pretty much a non-stop call for over a decade now, and longer. But this time, like all previous ones, I’m thinking: I don’t see it. I guess my first question is always: please explain why the dollar would collapse before the euro does.

For one thing, the dollar would have to collapse/default against one or more “entities”. The dollar is not like one of those highrises that collapse upon themselves. It will have to default or collapse against something(s) else. Since it is the world reserve currency, that means there would have to be a replacement reserve currency. Yes, that could also be for example gold or SDR’s, or even a basket of currencies, and something like that may happen eventually, but it doesn’t appear in the cards in the short run.

There are really only two candidates for the role, and neither looks at all fit to play it. The euro may have some ambitions in that direction, but it has far too many problems still. The yuan/renminbi certainly has such ambitions, but the Communist party refuses to let it get on stage to show what it’s got. As I recently wrote:

The main sticking point for Beijing is a conundrum it cannot solve. The CCP wants to have BOTH a global currency AND total control over that currency. It will have to choose between the two, and cannot make up its mind. So it pretends it doesn’t have to choose. Sure, there has been some advancement for the yuan, but I bet most of that is on the back of the Belt and Road (BRI), and that will turn out to be one of the main victims of the coronavirus. The BRI is China’s very clever way of exporting its overproduction, but potential buyers have other things on their mind today.

Meanwhile, even with that, the yuan is used in only 1.8% of cross-currency payments. [..] The sudden, and rushed, take-over of Hong Kong with the new security law will not help China’s plans to be accepted internationally. [..] The world’s large investors will not put their money into something that Xi Jinping can declare devalued by 50% on a rainy morning when he sees fit. He will have to cede that kind of control.

The euro has made some gains vs the USD recently, going from 1.07 to 1.16 or so, but that means very little once you look at the broader picture. Moreover, the reason the financial press provides for -much of- those gains, which is that the EU supposedly showed “unity” in its recent Recovery Fund talks, is bollocks.

If it showed one thing, it was a lack of unity. That’s why these were the longest talks they ever had. And if this had not been Angela Merkel’s last hurrah, they might not have agreed at all. They paid off the Frugal Four to the tune of hundreds of millions, and that’s how they got a deal. Horse traders.

A simple screenshot from Bloomberg of the USD vs EUR over the last five years makes clear why the recent changes are no big deal. (All BBG screenshots are from July 24 just before 10 AM EDT and all cover a 5 year period.) 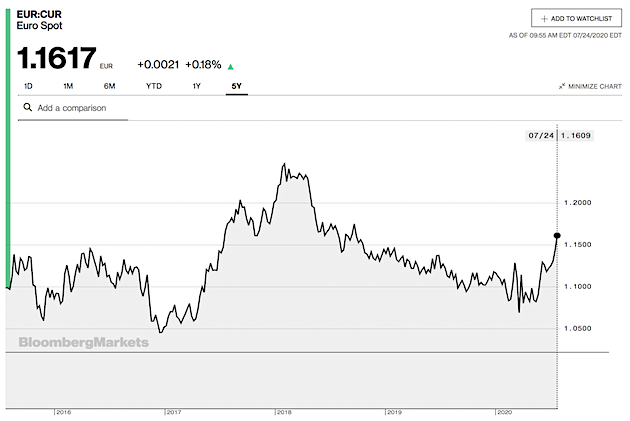 A 2015 SWIFT paper provides details about the US dollar’s share of international trade:

That’s from five years ago, but things won’t have changed much. The system is complex and inert, it has a very strong resistance against large and sudden changes. (Do note that the euro’s share of international trade is substantially skewed because it includes payments between countries that use the euro as their currency, plus those EU countries that don’t -yet-). Single market, international trade.

And then there’s the dollar’s FX role.

In September 2019, Eswar Prasad at Brookings reported that the dollar’s share of global FX reserves remains around 65%.

The drop from 66 percent in 2015 to 62 percent in 2018, is probably a statistical artifact related to changes in the reporting of reserves. Compared with 2007, however, the dollar’s share of global FX reserves has declined by 2 percentage points while the euro’s share is down 6 percentage points. Over this period, the Japanese yen’s share has risen by 2 percentage points, while other less prominent reserve currencies have increased their total share by 4 percentage points. The renminbi, which was not an official reserve currency in 2007, now accounts for 2 percent of global FX reserves. [..] .. the euro has stumbled, the renminbi has stalled, and dollar supremacy remains unchallenged.

[..] In July 2019, China’s total official reserve assets amounted to just over $3.2 trillion, of which $3.1 trillion (97 percent of the total) was held in the form of FX reserves. Gold holdings amounted to about $89 billion [..] Coming amid rising trade tensions with the U.S., the 5 percent increase in China’s gold stock and the 24 percent increase in the value of its official gold holdings during 2019 have been interpreted as a sign of China’s attempting to diversify its reserve holdings away from U.S. dollars.

Like many people talking about a USD demise, perhaps that’s too much of a dollar-centric view and conclusion. Surely gold and silver can rise vs the USD without announcing an imminent collapse of the latter. And since precious metals tend to go up in times of uncertainty, and COVID has brought shovels full of just that, you would expect them to rise.

Therefore you would have to also look at how they do vs for example the euro, before concluding anything. Note: I didn’t include Bitcoin because it’s too new and volatile. Makes me think of the Lindy Effect, often cited by Nassim Taleb, the idea that the older something is, the longer it’s likely to be around in the future.

Here are a few more Bloomberg screenshots. And yes, gold has done well vs the USD in, say, the past two years, no doubt. 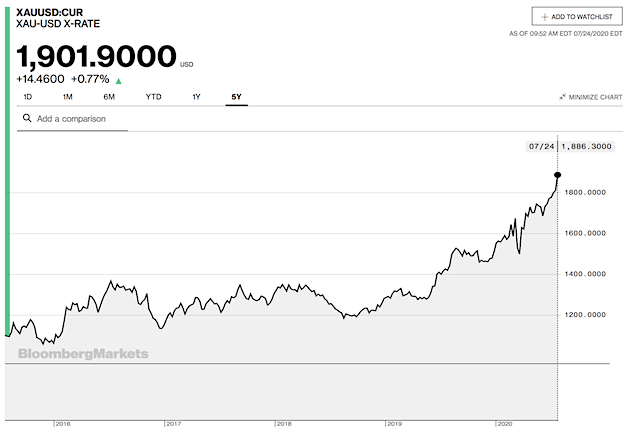 But gold has pretty much followed the exact same pattern vs the euro: 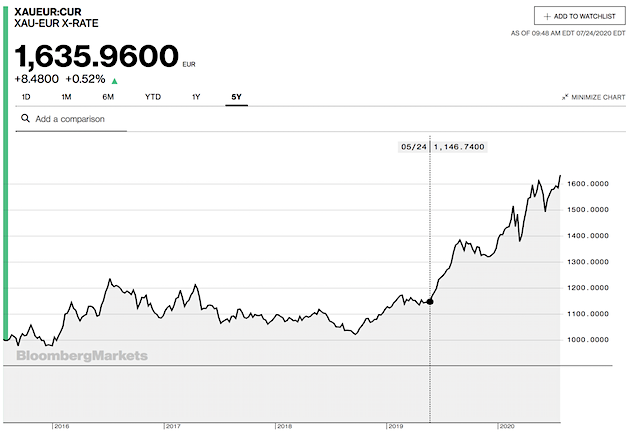 Silver has done even better, more recently, vs the USD, though compared to where it was in 2016 it’s not that big a step (barely more than 10%): 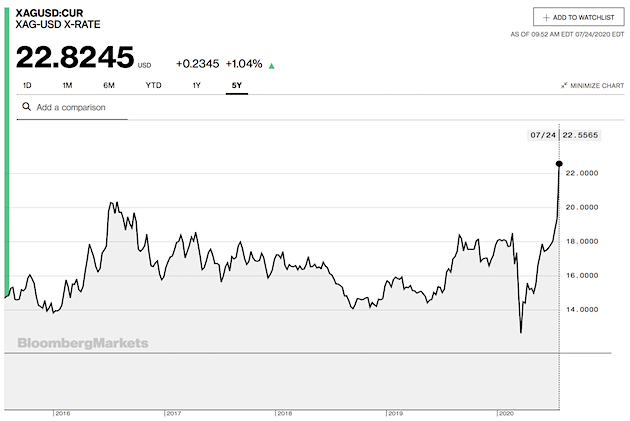 And the pattern of silver vs the euro is so similar it’s almost eery. 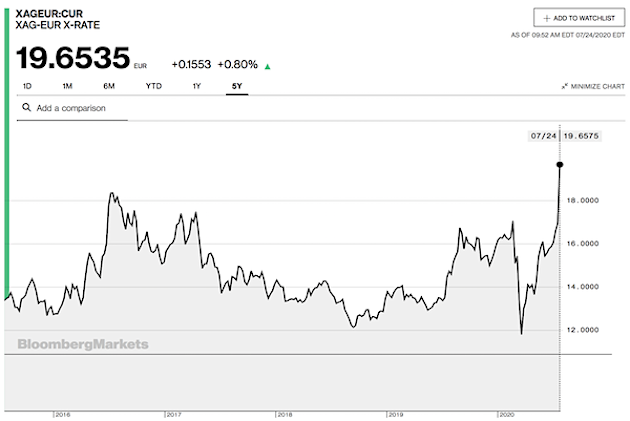 I don’t see anything there that would make me think the dollar is collapsing, no more than the euro is. What I see is gold and silver rising. People move into precious metals, perceived as safe havens; they always do when the world is in turmoil. And don’t forget there are trillions in additional recent central bank money sloshing around that have to move somewhere.

As for the changes of the USD vs the euro: we’ve already seen that they are not exceptional. Losing a few percent vs the euro will not collapse the dollar.

Also, there’s something missing in the discussion as far as I’ve seen: the option that it’s the US itself that wants a lower dollar at this point in time, and actively works to get it lower. A strong dollar works for a strong economy, but not for one weakened by a pandemic and an acrimonious political climate.

But the US has borrowed so much money!, you say. Yes, but so have Europe, and Japan, and China, everyone has who could.

A little more about gold, since some are clamoring for a return to the gold standard. Which is not likely, because too many parties would resist, either for ideological or practical reasons. But say you would consider it, then you would as one of the first things you do, look at gold reserves. Here are the top ten gold holding countries per March 2020, as assembled by TradingEconomics.com: 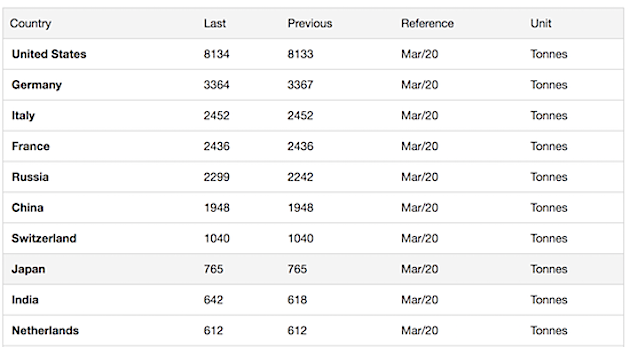 The US gold reserves are so large it would appear to give them an unfair advantage if a gold standard were considered. Same as they have in the current set-up. Then again, if you insert population numbers into the equation, Germany, Italy, Switzerland, even the Netherlands, have more in relative terms. Question is: where does that leave all the others?

Long story short: I don’t see a US dollar default or collapse in the near future. But by all means enlighten me.