By Thomas Neuburger. Produced by DownWithTyranny! 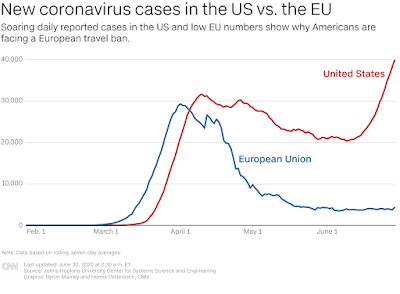 Thanks to Trump’s mismanagement of the Covid-19 outbreak, the U.S. is on the verge of becoming the Typhoid Mary of major industrial nations

Donald Trump’s resignation is a topic on many lips these days. Chris Hayes, in a dramatic moment at MSNBC, called for Trump’s to resign over his mishandling of the coronavirus epidemic (deservedly so), and at least one newspaper editorial board has called for Trump to step down, as has Washington Governor Jay Inslee.

Michael Gerson at the Washington Post called for Trump’s resignation because of “diminished moral capacity” related to his alleged callous indifference to the alleged Russian bounties offered for American lives in the Afghan theater of war.

Note that there are a lot of “if”s in these bounty reports — Gerson himself leads his argument with “If, as reported by multiple news sources” — while skeptics think it’s awfully convenient timing that leaks from … who? “American intelligence officials,” who proudly admit to lying … have reached the Times just as the Trump administration is working on Afghanistan peace agreements that could get the U.S. out of a war it’s been waging for almost 20 years. (Whether the U.S. has been waging that war successfully or not depends on what you think the U.S. considers success. If military occupation counts as success, we’ve succeeded. By any other measure, we’ve failed.)

Analysts are also speculating that Trump could leave office voluntarily or be forced out. Robert Kuttner wrote at The American Prospect that Trump may leave on his own, since nothing seems to be going his way lately and the minute he’s no longer president he’ll be subject to quite a bit of prosecution. Kuttner’s speculation hinges on the possibility of Trump negotiating a deal for resigning that amounts to a giant “Get out of jail free” card.

“Trump may conclude,” writes Kuttner, “that he has more leverage to cut the best possible deal with all players while the bargain includes a widely wished-for resignation, rather than after he loses an election and his term merely ends. At that point, Trump’s opponents have no incentive to make deals, and a pardon only goes so far.”

Sounds plausible to me, but I’ve been wrong before.

Others feel that increasing pressure from Republicans leaders, fearful of losing both the White House and the Senate in November, will cost him critical support within his party. Most of those discussions are private at the moment, but they are many. The question is the method — how to get him to go.

Which brings us back to the Russian bounties story. Will that carry such weight with the American people that his already “crummy” approval rating (39%) and poll numbers (nearly 10 points below Joe Biden) will drop even further? If so, could a combination of public shaming and deep unpopularity force him out of office?

Sounds unlikely to me, but I’ve been wrong before.

Something that might force his resignation, though, is so far low on people’s radar, but it shouldn’t be — the EU travel ban on Americans entering Europe. Consider the following from CNN (emphasis added):

(CNN) — The European Union has formally agreed a set of recommendations that will allow travelers from outside the bloc to visit EU countries, months after it shut its external borders in response to the outbreak of Covid-19.

As had been widely expected, the list of 14 countries does not include the United States, whose current Covid infection rate does not meet the criteria set by the EU for it to be considered a “safe country.”

The criteria requires that confirmed Covid cases in countries on the list are similar or below that of the EU’s per 100,000 citizens over the previous 14 days (starting from June 15).

Countries must also have a “stable or decreasing trend of new cases over this period in comparison to the previous 14 days,” while the EU will consider what measures countries are taking, such as contact tracing, and how reliable each nation’s data is.

US infection rates will need to dramatically drop if Americans are to be allowed entry to European countries, just as the European tourism industry enters what are traditionally its peak months.

The recommendations are expected to come into force as early as July 1, however, it remains up to member states to decide exactly how the implement any changes in border policy.

According to CNN, exemptions may be offered to “EU citizens or family members of an EU citizen; long-term EU residents or family members; those with an ‘essential function or need,’ such as diplomats, healthcare workers or certain agricultural workers.”

Does being wealthy, powerful or connected count as an essential function? How will business travelers be affected? Would Charles Koch be allowed in? Would a high-ranking official of, say, Apple, on her way to a meeting with a German corporate counterpart, be counted as having a need to enter Europe? What if Charles Koch or the Apple CEO wanted merely to look in on their eighth farm in France, bringing the grandkids for visit? Would they be allowed in?

If yes, how far down the wealth or corporate ladder would one need to be before the ban would apply? Would mere millionaires qualify? How about junior VPs at smaller companies? The questions, once exemptions are granted, are endless.

Which brings us to Donald Trump and his resignation. The following two things are true:

Second, this will be true from now until January 2021 when the next president is sworn in, and perhaps beyond.

The American people can be told to suffer and bear with it, but they don’t travel to Europe. Our bipartisan betters do, however, and this includes our Republican betters. If the Europeans are as strict as, frankly, they ought to be, do you think that powerful and wealthy Republicans, many of whose lives are essentially international, will tolerate a travel ban for the next six months?

When and if Republican elites decide that European governments are serious, that France, Germany, Italy and the rest won’t let most of them in, I’ll bet any money in the world that Donald Trump will be offered a deal, and both parties will be party to crafting it — even if it means letting Vice-President Pence run as an incumbent on the November ballot.

And, if Robert Kuttner is right about Trump’s legal needs post-election, I’ll also bet he takes it.