Yves here. It’s revealing to see how much effort the press and pundits spend in demonizing state capitalism, when the US version of capitalism arguably combines the worst of that system and laissez faire capitalism, by having many key industries so dependent on state support (banking, the military-surveillance complex) that they cannot properly be considered private, and others getting so many subsidies (real estate, higher education, Big Pharma) that they should at least be very strictly regulated.

By Ilias Alami, a political economist based at Maastricht University who recently authored the book Money Power and Financial Capital in Emerging Markets and Adam Dixon, Associate Professor of Globalization and Development at Maastricht University and principal investigator of the European Research Council-funded SWFsEUROPE project. Originally published at openDemocracy, based upon a research article recently published in Political Geography, available here 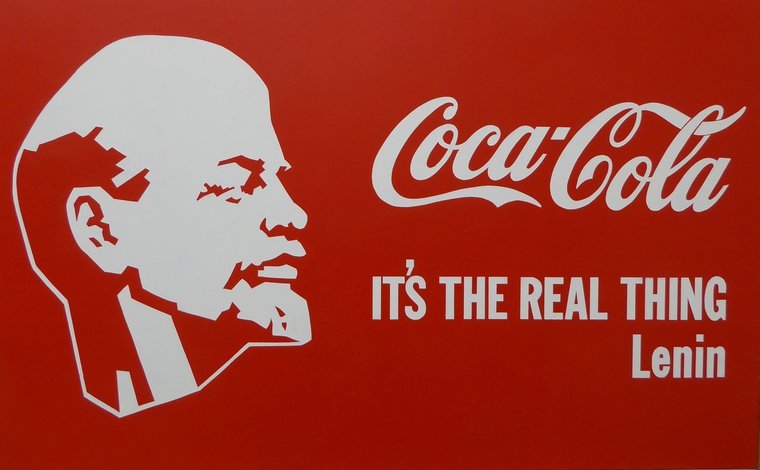 State capitalism is back. At least that is what we are told. An avalanche of books and articles have recently argued that the more visible role of the state across the world capitalist economy signals the resurgence of state capitalism. Consider the mass bailouts following the 2008 financial crisis and the Covid-2019 pandemic, the expansion of state-owned enterprises, sovereign wealth funds, national and regional development banks, the renewal of industrial policy and various forms of economic nationalism in the advanced capitalist economies, and the consolidation of state-led development in China and elsewhere. For many commentators and policymakers, these developments suggest that state capitalism is once again taking center stage in the global political economy.

These narratives of resurgent state capitalism are far from innocent. Consider the front cover of a 2012 special report of The Economist, figuring a picture of Lenin smoking a cigar. In another issue, published two years earlier and dedicated to state-backed Chinese takeovers, the front cover featured a picture of Mao handing over a wad of banknotes (see Fig. 1). 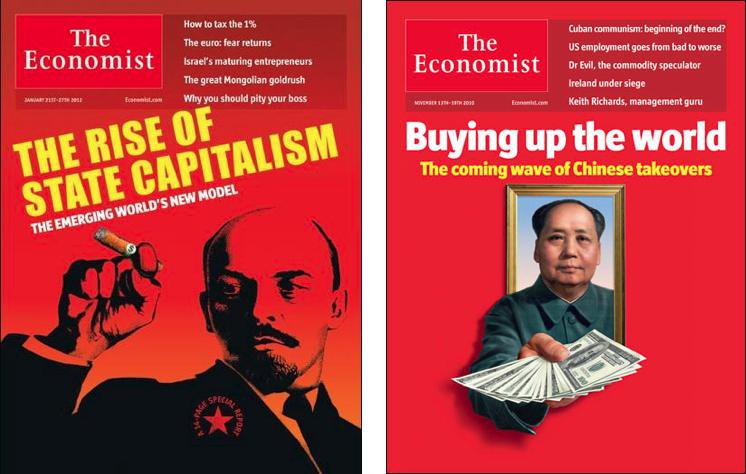 These imaginaries and representations comprise a myriad of value-laden symbols, which mobilize familiar histories and narratives. For instance, the red background color as well as the pictures of the two charismatic leaders elicit the histories of ‘really existing socialism’ in the ex-Soviet Union, China and elsewhere, but also that of the Cold War. Those representations link the contemporary ‘return’ of the state to the past by reactivating vivid memories of the Cold War and communism, while depicting imaginaries that echo with suspicion and duplicity. The covers suggest that in state capitalism, what lies behind the veil of capitalist money and markets – symbolized by the US dollar, both on Lenin’s cigar and Mao’s banknotes – is the concentration of economic power in the hands of strong, illiberal states. There is something inauspicious, if not threatening, about the fact that money is not allocated by the invisible hand of the market, but by the very visible hand of Mao.

Those imaginaries are not confined to the business press. In one of the most cited articles on the topic, then turned into a best-selling book, political pundit and president of Eurasia Group Ian Bremmer argues that the rise of state capitalism in the developing world is antithetical to Western liberal capitalism and seriously risks impairing the functioning of the free market. In another influential book, Council on Foreign Relations fellow Joshua Kurlantzick argues that the return of state capitalism ‘presents a real potential alternative to the free-market model, and as an alternative it presents serious threats to political and economic stability around the world’. For Harvard economist and Cato Institute research fellow Jeffrey Miron, ‘[China] has state capitalism, not true capitalism’.

We see the recent resurgence of these narratives and discourses as not coincidental. For us, it must be considered against the backdrop of a series of interrelated geopolitical and geo-economic transformations, including a shift in the center of gravity of the global economy from the North Atlantic to the Pacific rim, power dispersal in the global economy away from the traditional Western centers of power, and the multiplication of forms of reassertion of state authority in the economy and society.

Partly as result of these transformations, some of the older signifiers used to make sense of world politics, such as the geopolitical division of the world into ‘Third’, ‘Second’, and ‘First’, or between global North and global South, but also some of the post-Cold War narratives framed in the context of ‘globalization’ and the ‘end of history’, have lost traction and credibility. This is compounded by the highly inefficient responses to the Covid-19 crisis by a number of advanced capitalist states.

We submit that the re-emergence and redefinition of discourses of state capitalism participates in the search for new discursive frames and geopolitical lines of reasoning by strategic analysts, political leaders, foreign policy professionals, corporate pundits and academics, in order to render intelligible these messy epochal transformations. Put differently, state capitalism is rapidly emerging as ‘a new global drama’, that is, a simple and straightforward grand geopolitical narrative which acts as a frame of reference for political discourse and practice. Let us take a closer look at how it operates.

First, imaginaries of state capitalism reduce the complexity and diversity of the current political-economic transformations previously mentioned to a clear-cut binary opposition between free-market capitalism vs. state capitalism. The state capitalism narrative is a familiar story of heroes and villains which, through discourses of competition, hostility, and expanding influence, constructs a sense of ‘ideological directness’. The two main protagonists are easily identifiable, two radically different and incompatible models of capitalism.

Second, the geo-category establishes this sense of simplicity, directness, and familiarity by reactivating older grand geopolitical narratives, such as the ones that were central to the repertoire of Cold War geopolitics (cf. the covers above), but also the racialized rhetoric of empire. Indeed, these imaginaries suggest that state capitalism is located in spaces outside of the Western core of the world economy, and simultaneously construct the abnormality and alterity of state capitalism in reference to a presumed universal template of capitalist political organization which dominates in the West. This is evident in Bremmer’s account, which explicitly pits state capitalism against (Western-dominated) democratic liberal free-market capitalism, and in Miron’s characterization of Chinese state capitalism as some kind of impure form of capitalism.

Constructing the non-West as characterized by impurity and deviance (clientelism, corruption, dysfunctional political interference) is typical of racialized imperial discourses, and allows denying that those attributes are potential facets of Western capitalism too, which is simultaneously represented as a fundamentally democratic, rational, efficient, pure version of capitalism. Hence, this Western capitalism is constituted not only as morally superior, but also as the ideal norm.

Now, scrutinizing these narratives, the values that underpin them, and the context of their production is no mere intellectual exercise. They have real, material effects, and are implicated in the ‘ongoing social reproduction of power and political economy’. Imaginaries of state capitalism participate in the discursive construction of a threatened identity (Western state and business actors) and of a threatening object (Chinese state capitalism) that must be controlled. For instance, as the category state capitalism is rapidly entering the main political lexicon, highly complex political matters are refocused as an oversimplified question of competition with a rogue and expansionist state capitalism, which requires an appropriate policy response. The image of the nefarious state capitalist competitor is used to give meaning, political justification, and rally support for increasingly protectionist policies in trade, technology, and investment regulation in the United States and other advanced capitalist economies.

Consider for instance the US 2018 National Defense Strategy and the 2017 National Security Strategy. The portrayal of China as a state capitalist power with global ambitions in the context of a new Cold War, allows providing justification for the current toughening in US diplomacy and foreign policy. As such, hardline policy readjustments are presented as a well-intended and rational reaction to a global ideological threat, and not as an attempt from a declining hegemon to contain the rise of an increasingly capable competitor.

Another telling example is that of Germany’s new National Industrial Strategy 2030, as well as its recently announced economic plan for a post-coronavirus world. These plans feature unprecedented calls for state subsidies, direct state participation in companies, and a reform of EU competition policy, all justified by concerns that distressed firms and under-valued strategic assets in Germany and Europe may be targeted by ‘predatory’ state capitalist investors from beyond Europe.

The irony of these narratives won’t escape the reader: the imagined threat of ‘state capitalism’ in the East begets state capitalism in the West. Casting doubt on the legitimacy of state capitalist competitors, namely China, justifies state intervention and protectionism at home. As we have suggested elsewhere, we may very well all be state capitalists now.