Yves here. The bizarre veneer that things are still kinda-sorta normal despite the labor market imposing and widespread non/underpayment of residential and commercial real estate obligations is beyond me. Admittedly, hitting the pause on evictions and propping up businesses (and employment) with PPP loans, CARES Act stipends, and topped-up unemployment is helping maintain spending in the economy. But the PPP job-maintenance requirements are rolling off for the early borrowers. How much more jobs bleed will we see from that alone? And that’s before you get to the panic about rising Covid-19 rates in many states.

The data chaos persists, and the unemployment numbers keep getting worse. The torrent of newly unemployed keeps flowing week after week. But a lot of people are also going back to work. The total number of people who continued to claim unemployment compensation in the week ended July 4 under all state and federal unemployment insurance programs, including gig workers, jumped by 1.41 million people, to 32.92 million (not seasonally adjusted), the Department of Labor reported this morning. It was the highest and most gut-wrenching level ever. 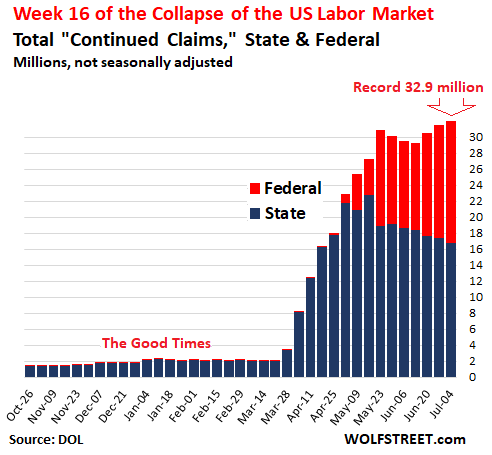 Those declines in initial claims have been painfully slow over the past four weeks. Over those four weeks combined, 5.75 million newly-laid-off people filed initial unemployment claims. The chart represents the weekly inflow of newly unemployed under state programs into the masses of the unemployed: 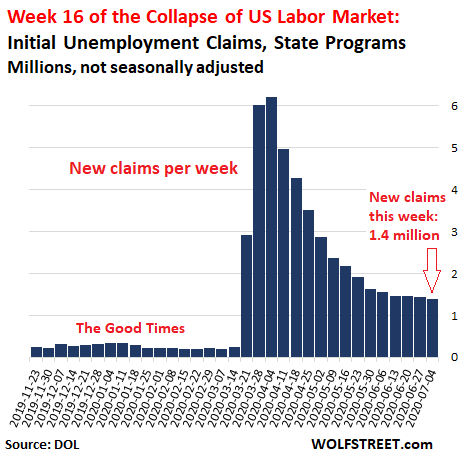 But millions of people who had been on state unemployment insurance got their jobs back, and this includes some workers at retail stores, restaurants, bars, hotels, but also in construction and other activities.

This outflow of people coming off the state unemployment rolls has been higher than the weekly inflow, and as a result, those continuing to receive unemployment insurance, the “insured unemployed,” under state programs fell to 16.8 million. Though still a gigantic number, it was the lowest since mid-April (blue columns in the first chart above).

Pandemic Unemployment Assistance (PUA), which covers gig workers: 1.04 million initial claims were processed by 49 states in the week ending July 4. This represents the weekly inflow into the mass of gig workers claiming benefits under this program.

One state – New Hampshire – has still not figured out how to process these federal PUA claims and continues to stiff its gig workers. But this is a big improvement over last week, when three states still hadn’t processed any PUA claims. Georgia and West Virginia finally started processing claims this week. Florida started processing PUA claims last week.

The mass of gig workers that continue to claim benefits under the PUA program jumped by 1.5 million from a week earlier, to 14.36 million. This is a huge number and shows just how hard gig workers have been hit and how important they are in the labor market. These gig workers include everyone from Uber drivers to coders working on a contract basis, who ran out of work.

Gig workers claiming continued benefits under PUA now account for 44% of all people on state and federal unemployment rolls. At this rate of progression, in a few weeks, they may be over half of all continued unemployment claims.

Pandemic Emergency Unemployment Compensation (PEUC), for those who have exhausted all rights to regular state and federal unemployment insurance: The number of people who continue to claim benefits rose to 850,461. But 11 states still have not yet processed any claims under the PEUC program, including Florida.

These unemployed under all federal programs combined, and under some other programs, are shown by the red columns in the first chart above.

No government agency, neither at the state nor at the federal level, was ready for this type of unemployment crisis when it suddenly erupted in mid-March. The result has been chaos in processing unemployment claims and then in paying people their unemployment benefits.

There have been countless claims for months that unemployment offices around the country were having trouble even processing initial unemployment claims under state programs.

And actually paying claims has fallen way behind too. This is happening around the country to varying degrees. For example, according to government data cited by the Mercury News yesterday, by the end of May, California had started paying benefits to 3.13 million unemployed but still hadn’t paid 1.88 million unemployed, though it had processed their claims. The state may have caught up some by now.

There has been chaos everywhere. States are still behind processing claims. Some claims that have been processed were fraudulent, according to reports. There may be duplication and other issues. And data chaos has made the separate monthly jobs report by a different agency, the Bureau of Labor Statistics, a useless mess. But one thing we know: This unemployment crisis is dragging out. And there is no V-shaped recovery at the moment.

At stake are a dozen major clothing brands, thousands of stores, and many thousands of employees, after years of struggling, while work-from-home is annihilating casual and formal office attire. Read… Pandemic