Yves here. This is a critically important question that politicians and curiously even public health officials seem to be avoiding, which is what do we do if Covid-19 isn’t beaten back any time soon?

Even non-scientists like this humble site picked up early on passing mentions of the fact that there is no long-duration immunity to any of the current major coronaviruses. The common cold confers immunity of only about six months. MERS confers the longest-lasting immunity, about 34 months….with also a 34% fatality rate. Vaccines rely on creating antibodies without triggering a full-blown case of the disease, but if the antibodies don’t beat Covid-19 for all that long, the best we’d be looking at is regular vaccinations…and that assumes it does not mutate too much in the meantime.

We do not yet know whether individuals who recover from COVID-19 can be reinfected. If immunity wanes, the disease will become endemic, in sharp contrast to a model in which recovery confers permanent immunity. This column considers the possibility that immunity is indeed only temporary, and derives a stylised optimal containment policy to reduce the initial wave of contagion and then manage persistent infections. In practice, this means that partial lockdowns and social distancing measures may be the norm for years to come.

It is now almost four months since COVID-19 was declared a global pandemic. As the epidemic was unfolding in February 2020, with little information about the new coronavirus SARS-CoV-2, scientists from across disciplines offered projections of the epidemic and proposed optimal policy measures that had one target in common: getting through the worst phase of the epidemic and flattening the curve.

Early contributions attempted to quantify and simulate optimal policy measures, and broadly proposed a two to three-month strict lockdown to be imposed some weeks into the epidemic. Some analyses recommended a severe 60% lockdown starting at two weeks after the outbreak and lasting for three months (Alvarez et al. 2020). Others recommended an even stricter lockdown of 67% for a bit less than two months (Gonzalez-Eiras and Niepelt 2020). More recently, Gollier (2020) shows that uncertainty about the basic reproduction rate means the optimal containment policy is less severe than a setting in which the reproduction number is known.

Four months on, uncertainty around COVID-19 persists. Global daily confirmed cases are steadily increasing and global daily deaths have plateaued at about 4,500-5,000 per day for most of June and early July 2020. While strict lockdown measures are being lifted in many countries, new infection spikes have appeared in others, as the world wakes up to the fact that this coronavirus is likely to stay for a long time.

One great unknown about COVID-19 is whether individuals who recover from it can be reinfected. At the emergence of any new virus, it is impossible to know whether immunity is permanent or wanes, until enough time has passed for longitudinal studies to take place. At the moment, and with limited available data, medical scientists and epidemiologists are instead comparing SARS-CoV-2 to related coronaviruses, such as HCoV-HKU1 and HCoV-OC43, which are known to exhibit waning immunity. An early contribution by Kissler et al. (2020) assumed that immunity to SARS-CoV-2 wanes in approximately 45 weeks. A recent medical study (Long et al. 2020) found a significant drop in specific antibody levels after three months. Nevertheless, the duration of immunity in general is still far from understood.

In Giannitsarou et al. (2020), we explicitly consider a setting in which immunity is temporary. We derive a stylised optimal containment policy and contrast it to policies assuming that once recovered, individuals are forever immune.

We work with a flexible epidemic model known as SEIRS (Susceptible-Exposed-Infected-Recovered-Susceptible). The model allows for natural births and deaths, disease induced deaths, a pre-symptomatic state in which individuals are exposed to the virus and can be infectious without exhibiting symptoms, and importantly, waning immunity.  In such a framework, because immunity may slowly disappear from recovered people, there is the potential for a second (and even third) wave of infection.

An important feature of this epidemiological model is that with waning immunity (the SEIRS model) the disease becomes endemic. This means that if left uncontrolled, it will never be eradicated, in sharp contrast to a model in which recovery confers permanent immunity (the SEIR model). In the SEIR model, the disease will be always eradicated in the long run once herd immunity is achieved, even when left uncontrolled. This observation has important implications for the design of optimal policy while we wait for a vaccine or other pharmaceutical interventions to become available.

Our policy analysis assumes that a vaccine or medical treatment is not currently available, but will become available in six years from the onset of the epidemic.1 The only instrument available to the policymaker is a broadly defined measure of social distancing which, within the context of the model, simply reduces the contact rate between susceptible and infectious individuals.

We calibrate the epidemic model and optimal policy problem to the most up-to-date estimated population and epidemic parameters from the US, and then perform comparative analysis with different assumptions about the waning period.

Figure 1 shows the number of infected individuals over time when the disease is left uncontrolled (top panel); when the disease is optimally controlled using social distancing measures (middle panel); and the path of optimal social distancing (bottom panel). In each, the light blue line shows the model with permanent immunity (SEIR) and the red line corresponds to the model with immunity waning in one year. 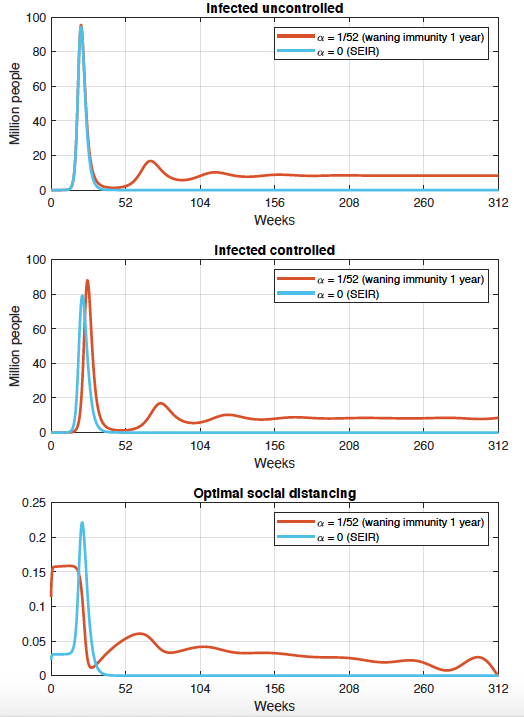 If immunity wanes, the optimal social distancing policy is quite different. While restrictions start out at a higher level than in the SEIR model, the level never reaches more than 16.5%. These measures are sustained at a relatively stable level for about six months from the start of the epidemic, and then dropped temporarily, only to be increased again intermittently when the second and following smaller waves arise. To make sense of this different policy design, we note that when immunity wanes, all those infected in the initial wave of the epidemic go through the phases of the disease only to become susceptible to infection again. In this sense, policy efforts to severely supress the first wave of the epidemic are ineffective: the optimal policy now primarily aims at delayingas much as possible the different phases of the epidemic, while also dampeningthe disease incidence. Overall, the optimal social distancing has two main phases: an initial phase with suppression that is not as aggressive as in the SEIR setting, and a second phase characterised by a varying low-level management of subsequent infection waves. Here, the number of infected individuals under the optimal social distancing policy at the first peak of the epidemic is about 8.5% smaller than in the uncontrolled model. But the optimal policy now also flattens future waves of the epidemic and ensures that the long run endemic level of infected individuals is lower than in the uncontrolled model.

In summary, we find that if immunity to SARS-CoV-2 is temporary, the disease will become endemic. The optimal policy will make an initial effort to reduce the first great infection wave and then engage in a permanent low level management of the persistent infection in the population in order to keep it under control. In practice, this means that partial lockdown or social distancing measures may become the norm for some years to come.

Our analysis assumed that, currently, the only policies at our disposal are broad-based non-medical interventions such as social distancing and lockdown measures. At the initial stages of the COVID-19 pandemic, such policies proved to be extremely costly from social, economic, and health care perspectives. But going forward, we expect that individuals, businesses, and governments are likely to adapt how they do things and operate to mitigate the costs of this initial dramatic shock. People may become more cautious in everyday dealings, businesses may come to depend less on third parties or off-shoring, while other organisations such as schools, transport, intermediate goods producers, and local governments may find innovative ways to become more flexible and resilient in the ways they deliver services and products. We hope that with creativity and resourcefulness, humanity will learn to navigate and live with the disease, should it turn out to be here for the long term.