Patient readers, I had one too many mimosas at brunch today, so Water Cooler will be a little abbreviated. –lambert 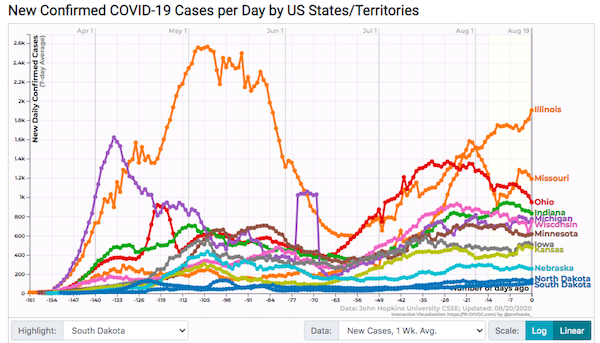 I left out positivity, becaue the chart becomes unreadable if I include it. Interesting spike in Missouri; I wonder if it’s a reporting problem at the state level, since they seem to be cropping up all over.

Click the map to create your own at 270toWin.com

“Official Drinking Game, “The Speech Joe Biden Has Been Preparing For His Entire Life” Edition” [Matt Taibbi]. “Guessing what an unscripted Joe Biden will do at any given moment is pretty interesting. Here we’re basically trying to guess what Biden and his handlers have decided to put on a teleprompter.” Yep. Then the rules: “Drink EVERY TIME: 1. Biden says, ‘Folks.’… Take small sips and hydrate. Good luck, America!”

G’night, mom and dad. See you in the morning. ♥️ pic.twitter.com/2E5boDld2w

This is just a sampling. There’s plenty more.

Opinion: The first night of the DNC did something radical. It let us feel normal again. https://t.co/ty8QTToDaD

My Wife just now, "Jill Biden is going to give America a Mommy again. It's what we need."

At this point I have to think they’re just doing it on purpose. They can’t really be like this pic.twitter.com/pNn0YdHp8j

What @DrBiden did so effectively last night was connect the grieving of the Biden family with the grieving of the country as we go through #Coronavirus and other tragedies. If ever there was a family that was equipped to help a country heal after grieving, it's the Bidens.

Republicans: No
Democrats: No ❤?️‍?#blm

“What it is ain’t exactly clear:”

“When we get in, the pantry is going to be bare,” said Mr. Kaufman, who is leading Mr. Biden’s transition team. “When you see what Trump’s done to the deficit…all the deficits that he built with the incredible tax cuts. So we’re going to be limited.” ?https://t.co/VEz6VlGRK0

Just curious about the timeline on holding Dems accountable if we’re this easily impressed. During the January celebratory mimosa brunches? The Facebook Presents Black History Month™️ at the White House? Maybe it’s after the AKA South Lawn Easter Egg Stroll idk. https://t.co/0H38NZ3A6P

At reader request, I added some business stats back in. Please give Econintersect click-throughs; they’re a good, old-school blog that covers more than stats. If anybody knows of other aggregators, please contact me at the email address below.

Unemployment: “15 August 2020 Initial Unemployment Claims Climb Back Over One Million” [Econintersect]. “The more important (because of the volatility in the weekly reported claims and seasonality errors in adjusting the data) 4 week moving average moved from 1,254,750 (reported last week as 1,252,750) to 1,175,750.”

The Bezzle: “Airbnb files for IPO that was ‘hard to imagine’ just a few months ago” [MarketWatch]. “The San Francisco-based startup was hit hard by the COVID-19 pandemic as travel came to a halt in many parts of the world in March, with its valuation reportedly dropping from $31 billion to $18 billion a month later. It laid off almost 1,900 employees, or nearly 25% of its workforce, in May. But the company said in a news release after trading closed Wednesday that it had filed a draft registration statement for an IPO — not a direct listing — with the U.S. Securities and Exchange Commission. ‘It was hard to imagine in mid-March and April that Airbnb would be going public this year,’ Tom White, an analyst with D.A. Davidson, said Wednesday. With travel for business and pleasure ‘decimated,’ however, the bright spot in the industry has been alternative accommodations and vacation-rental inventory. People have been cooped up, and the virus-safe option is renting a house,’ White said.”

“Climate change: Dams played key role in limiting sea level rise” [BBC (Paul O)]. “Measuring how much the seas have risen over the past 100 years or so is a difficult task for scientists. Researchers found that there was a gap between how much water they knew had gone into the oceans compared to how much those oceans had actually risen by over the past century…. There are around 58,000 large dams in the world right now with many of them constructed over the past 60 years. … The study finds that overall sea level has risen by approximately 1.56mm per year between 1900 and 2018. The largest contributors to rising seas over most of the 20th century have been melting glaciers which have responded faster to a warmer world.Over this whole period, the authors believe that sea level would have been around 12% higher without the influence of dams and reservoirs.” • That’s remarkable!

“Would a Biden Victory Be a Win for the Working Class?” [Michael Lind, Tablet (carla)]. “The suggestion that a Biden administration would be pushed in a pro-worker direction out of fear of incurring the wrath of veterans of the Sanders campaign and the feckless Democratic Socialists of America could make a cat laugh. A Biden administration would be staffed by conventional, conformist, careerist retreads from the administrations of Bill Clinton and Barack Obama, representing the pro-Wall Street, anti-labor wing of the Democratic Party that has been dominant since the 1990s. Biden Democrats are likely to use a combination of social liberalism and fiscal conservatism to bring well-heeled Bloombergian independents and country-club Bush Republicans permanently into the Democratic coalition, accelerating its transformation into an alliance of affluent whites with members of minority groups who vote on the basis of race, not class. As long as enough well-off whites and African Americans and Hispanics vote for the centrist candidates of the Clinton-Obama-Biden machine, neoliberal Democrats have nothing to fear from ‘democratic socialist’ poseurs in pricey hipster neighborhoods and college towns.” • As I said, more or less, yesterday. More: “Even if the Democrats win a trifecta of the White House, House, and Senate in November, the boss class will remain firmly in control, kicking American labor while it is down. Welcome to the 2020s, American workers of all races. Have a nice decade.” Yep. Barring, well, accidents…. Definitely worth reading in full.

“The Elegy of the New American Left” [Policy Tensor]. “While Sanders generated much enthusiasm in the New American Left, and some working-class whites still left in the Democratic fold, the response from the core of the Democrats’ rainbow coalition was decidedly lukewarm. Both professional middle-class whites and African-Americans remained loyal to the Clinton-Obama neoliberal wing. Chastened by the rejection of mostly working-class black communities in 2016, Sanders made a point of reaching out to black Democrats in his second bid. It did not work. What was worse, it turned out that working-class whites who seemed to be enthusiastic about Sanders in 2016 were, in fact, voting against Clinton. In the 2020 cycle, they favored Biden, the lackluster former vice president of Barack Obama. With a broad base of support among centrist professional middle-class whites, African-Americans, and working-class whites, Biden consistently polled ahead of the pack through the early campaign season. It was widely assumed in the progressive faction of the professional middle-class, including much of the media, that Biden was merely keeping the seat warm until a real candidate emerged. But the Biden tendency continued to persist. When Sanders briefly took the lead in February and seemed within reach of racking up an insurmountable lead, party elders panicked…. With days to go before Super Tuesday, party elders cleared out the “centrist lane” in a stunning display of party discipline and elite competence. Pete Buttigieg, an AstroTurf political entrepreneur known for his effortless regurgitation of platitudes, and Amy Klobuchar, a seasoned and highly competent senator from Minnesota, were prevailed upon to drop out and throw their weight behind Joe Biden. The operational maneuver was shockingly effective. Although it would be a while before Sanders would throw in the towel, Biden locked up the Democratic nomination on Super Tuesday.” But: “Sanders lost the “electability” argument to Biden once it became clear that the latter enjoyed greater support in the working-class. In other words, the Sanders campaign failed to forge the progressive-working class alliance — “a mass working-class movement to challenge the power of the billionaires” — that it had itself deemed a prerequisite for the ‘political revolution.’ To place the blame squarely on the superior organization of the enemy is not serious.” • Yep. Also worth reading in full. I still want to know why the Sanders campaign lost Texas, though. The popular vote was 34% Biden, 29% Sanders, with Bloomberg at 14% and Warren once again playing the successful spoiker at 11%. That’s pretty close. Flip that contingency, and the Sanders campaign would be hailed as a work of genius. Texas readers?

“Listen to Episode 160: Neither Snow Nor Rain Nor Chronic Lyme” (podcast) [Trillbilly Worker’s Party]. • Maybe listen to this in conjunction with the two articles above. Terance: “People have been protesting in Louisville for 85 days over Breonna Taylor’s murder. 85 days. And the fact that the powers that be can just withstand that, and just not even respond to it, and be like “That’s nice, just keep doing your thing,” that tells me that we have to develop some sort of new way of applying leverage to them.”

Please don’t put a library book in the microwave to kill the coronavirus. It sets fire to the barcode we put on the book #librarybook #book #librarylife #librarytwitter #coronavirus pic.twitter.com/V68gada3DE

Enough to make me change my mind about golf:

Readers, feel free to contact me at lambert [UNDERSCORE] strether [DOT] corrente [AT] yahoo [DOT] com, with (a) links, and even better (b) sources I should curate regularly, (c) how to send me a check if you are allergic to PayPal, and (d) to find out how to send me images of plants. Vegetables are fine! Fungi and coral are deemed to be honorary plants! If you want your handle to appear as a credit, please place it at the start of your mail in parentheses: (thus). Otherwise, I will anonymize by using your initials. See the previous Water Cooler (with plant) here. Today’s plant (WB): 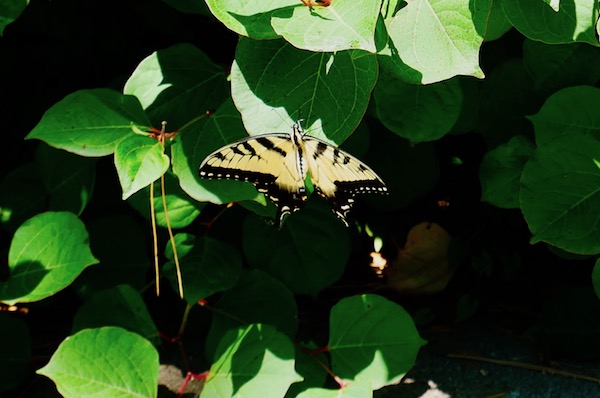 WB remarks: “Peak fluttering….” I have always taken Tiger Swallowtails as a sign of good luck. So here we are!