Yves here. Aiee, another way Covid-19 wreaks unexpected havoc, as in “recovering” too often isn’t clear cut. These accounts are important to underscore the importance of taking precautions and to provide intel in case a relative or friend is similarly afflicted. 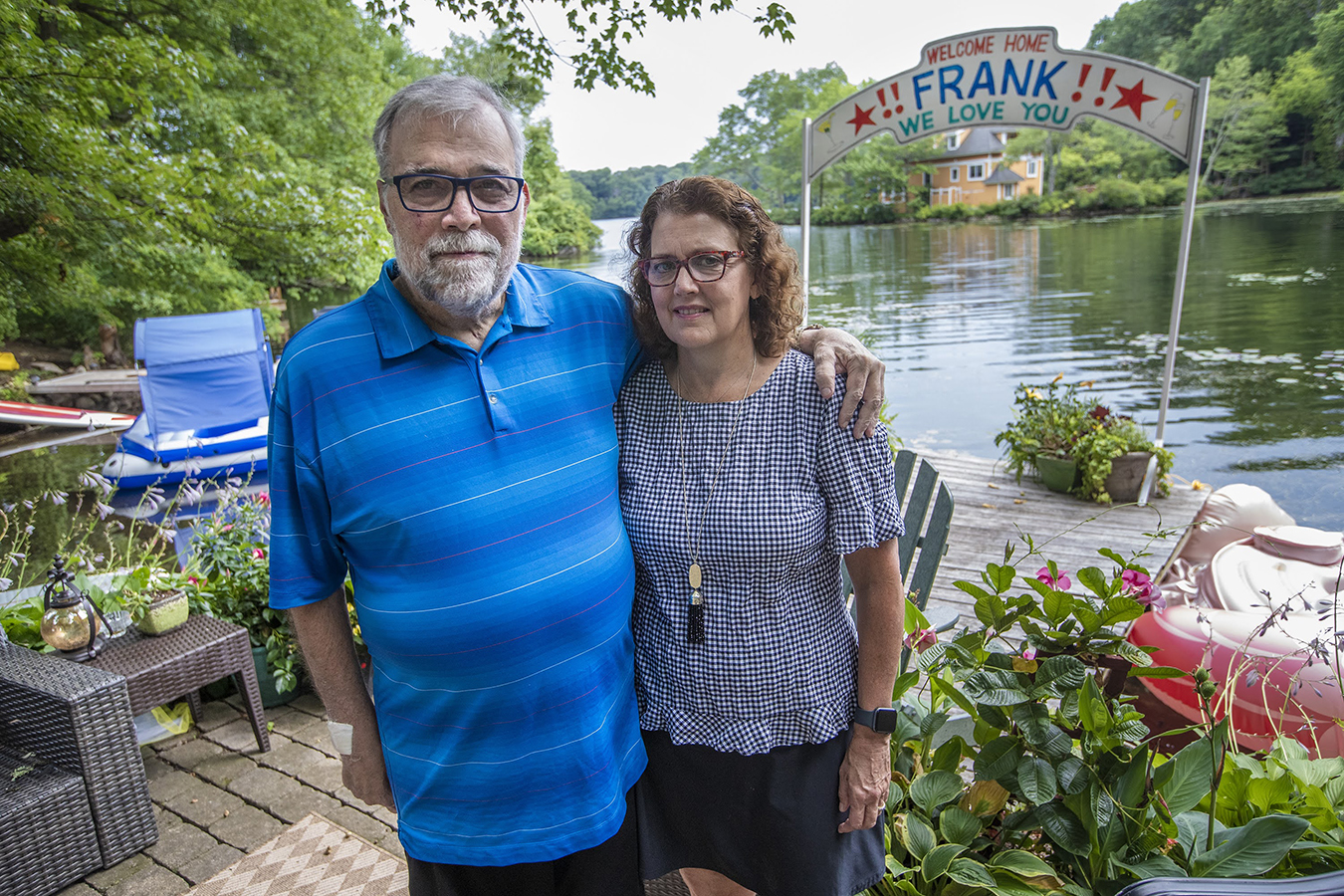 Frank and Leslie Cutitta stand outside their home in Wayland, Massachusetts, where a banner still hangs for his return from the hospital. (Jesse Costa/WBUR)
Leslie Cutitta said yes, twice, when clinicians from Massachusetts General Hospital in Boston called asking whether she wanted them to take — and then continue — extreme measures to keep her husband, Frank Cutitta, alive.

The first conversation, in late March, was about whether to let Frank go or to try some experimental drugs and treatments for COVID-19. The second call was just a few days later. Hospital visits were banned, so Leslie couldn’t be with her husband or discuss his wishes with the medical team in person. So she used stories to try to describe Frank’s zest for life.

“Frank used to joke that he wanted to be frozen, like Ted Williams, until they could figure out what was wrong with him if he died,” said Leslie Cutitta. It wasn’t a serious end-of-life discussion, but Cutitta knew her husband would want every possible lifesaving measure deployed.

So the Cutittas hung on and a small army of ICU caregivers kept working. On April 21, after 27 days on a ventilator, Frank’s lungs had recovered enough to remove the breathing tube.

After the removal, it typically takes hours, maybe a day, for the patient to return to consciousness. The body needs that time to clear the drugs that keep the patient sedated and comfortable — able to tolerate intubation and mechanical ventilation.

But doctors across the U.S. and in other countries have noted a troubling phenomenon associated with some COVID cases: Even after extubation, some patients remain unconscious for days, weeks or longer. There’s no official term for the problem, but it’s being called a “prolonged” or “persistent” coma or unresponsiveness.

Frank Cutitta, 68, was one of those patients. He just didn’t wake up.

“It was a long, difficult period of not — just not knowing whether he was going to come back to the Frank we knew and loved,” said Leslie Cutitta. “It was very, very tough.”

Doctors studying the phenomenon of prolonged unresponsiveness are concerned that medical teams are not waiting long enough for these COVID-19 patients to wake up, especially when ICU beds are in high demand during the pandemic.

As Frank’s unresponsive condition continued, it prompted a new conversation between the medical team and his wife about whether to continue life support. Although he no longer needed the ventilator, he still required a feeding tube, intravenous fluids, catheters for bodily waste and some oxygen support.

Leslie Cutitta recalled a doctor asking her: “If it looks like Frank’s not going to return mentally, and he’s going to be hooked up to a dialysis machine for the rest of his life in a long-term care facility, is that something that you and he could live with?”

She struggled to imagine the restricted life Frank might face. Every day, sometimes several times a day, she would ask Frank’s doctors for more information: What’s going on inside his brain? Why is this happening? When might something change?

Their candid and consistent answer was: We don’t know.

“Because this disease is so new and because there are so many unanswered questions about COVID-19, we currently do not have reliable tools to predict how long it will take any individual patient to recover consciousness,” said Dr. Brian Edlow, a critical care neurologist at Mass General.

Given all the unknowns, doctors at the hospital have had a hard time advising families of a patient who has remained unresponsive for weeks, post-ventilator. Some families in that situation have decided to remove other life supports so the patient can die. Edlow can’t say how many.

“It is very difficult for us to determine whether any given patient’s future will bring a quality of life that would be acceptable to them,” Edlow said, “based on what they’ve told their families or written in a prior directive.”

Theories abound about why COVID-19 patients may take longer to regain consciousness than other ventilated patients, if they wake up at all. COVID-19 patients appear to need larger doses of sedatives while on a ventilator, and they’re often intubated for longer periods than is typical for other diseases that cause pneumonia. Low oxygen levels, due to the virus’s effect on the lungs, may damage the brain. Some of these patients have inflammation related to COVID-19 that may disrupt signals in the brain, and some experience blood clots that have caused strokes.

“So there are many potential contributing factors,” Edlow said. “The degree to which each of those factors is playing a role in any given patient is still something we’re trying to understand.”

One of the first questions researchers hope to answer is how many COVID-19 patients end up in this prolonged, sleeplike condition after coming off the ventilator.

“In our experience, approximately every fifth patient that was hospitalized was admitted to the ICU and had some degree of disorders of consciousness,” said Dr. Jan Claassen, director of neurocritical care at New York’s Columbia University Medical Center. “But how many of those actually took a long time to wake up, we don’t have numbers on that yet.”

An international research group based at the University of Pittsburgh Medical Center expects to have in September some initial numbers on COVID-19 brain impacts, including the problem of persistent comas. Some COVID patients who do eventually regain consciousness still have cognitive difficulties.

To try to get a handle on this problem at Columbia, Claassen and colleagues created a “coma board,” a group of specialists that meets weekly. Claassen published a study in 2019 that found that 15% of unresponsive patients showed brain activity in response to verbal commands. A case reported by Edlow in July described a patient who moved between a coma and minimal consciousness for several weeks and was eventually able to follow commands.

This spring, as Edlow observed dozens of Mass General COVID-19 patients linger in this unresponsive state, he joined Claassen and other colleagues from Weill Cornell Medical College to form a research consortium. The researchers are sharing their data to determine the cause of prolonged coma in COVID-19 patients, find treatments and better predict which patients might eventually recover, given enough time and treatment.

The global research effort has grown to include more than 222 sites in 45 countries. Prolonged or persistent comas are just one area of research, but one getting a lot of attention.

Dr. Sherry Chou, a neurologist at the University of Pittsburgh Medical Center, is leading the international effort.

Chou said families want to know “whether a patient can wake up and be themselves.” Answering that question “depends on how accurate we are at predicting the future, and we know we’re not very accurate right now.”

A CT scan of Frank Cutitta’s brain showed residue from blood clots but was otherwise “clean.”

“From what they could tell, there was no brain damage,” Leslie Cutitta said.

And then, on May 4, after two weeks with no signs that Frank would wake up, he blinked. Leslie and her two daughters watched on FaceTime, making requests such as “Smile, Daddy” and “Hold your thumb up!”

“At least we knew he was in there somewhere,” she said.

It was another week before Frank could speak and the Cutittas got to hear his voice.

“We’d all be pressing the phone to our ears, trying to catch every word,” Leslie Cutitta recalled. “He didn’t have a lot of them at that point, but it was just amazing, absolutely amazing.”

Frank Cutitta spent a month at Spaulding Rehabilitation Hospital. He’s back home now, in a Boston suburb, doing physical therapy to strengthen his arms and legs. He said he slurs words occasionally but has no other cognitive problems.

While he was in the ICU, Cutitta’s nurses played recorded messages from his family, as well as some of his favorite music from the Beach Boys and Luciano Pavarotti. Frank Cutitta said he believes the flow of these inspiring sounds helped maintain his cognitive function.

The Cutittas said they feel incredibly lucky. Leslie Cutitta said one doctor told the family that during the worst of the pandemic in New York City, most patients in Frank’s condition died because hospitals couldn’t devote such time and resources to one patient.

“If Frank had been anywhere else in the country but here, he would have not made it,” Leslie Cutitta said. “That’s a conversation I will never forget having, because I was stunned.”

It “could have gone the other way,” he said, if clinicians had decided “‘Look, this guy’s just way too sick, and we’ve got other patients who need this equipment.’ Or we have an advocate who says, ‘Throw the kitchen sink at him,’” Frank said. “And we happened to have the latter.”

Many hospitals use 72 hours, or three days, as the period for patients with a traumatic brain injury to regain consciousness before advising an end to life support. As COVID-19 patients fill intensive care units across the country, it’s not clear how long hospital staff will wait beyond that point for those patients who do not wake up after a ventilator tube is removed.

Joseph Giacino, director of rehabilitation neuropsychology at Spaulding, said he’s worried hospitals are using that 72-hour model with COVID-19 patients who may need more time. Even before the coronavirus pandemic, some neurologists questioned that model. In 2018, the American Academy of Neurology updated its guidelines for treating prolonged “disorders of consciousness,” noting that some situations may require more time and assessment.

Some patients, like Frank Cutitta, do not appear to have any brain damage. Whatever caused his extended period of unconsciousness cleared.

Unless a patient has previously specified that she does not want aggressive treatment, “we need to really go slow,” said Giacino, “because we are not at a point where we have prognostic indicators that approach the level of certainty that is necessary before making a decision that we should stop treatment because there is no chance of meaningful recovery.”

Doctors interviewed for this story urged everyone to tell their loved ones what you expect a “meaningful recovery” to include. If confronted with this situation, family members should ask doctors about their levels of certainty for each possible outcome.

Some medical ethicists also urge clinicians not to rush when it comes to decisions about how quickly COVID-19 patients may return to consciousness.

“A significant number of patients are going to have a prolonged recovery from the comatose state that they’re in,” said Dr. Joseph Fins, chief of medical ethics at Weill Cornell Medical College. “This is a time for prudence because what we don’t know can hurt us and can hurt patients.”

Leslie and Frank Cutitta have a final request: Wear a mask.

“This disease is nothing to be trifled with,” Leslie Cutitta said. “It’s a devastating experience.”

Frank Cutitta worries about all of the patients still suffering with COVID-19 and those who have survived but have lasting damage.

“I’m not considering myself one of those,” he said, “but there are many, many people who would rather be dead than left with what they have after this.”

This story is part of a partnership that includes WBUR, NPR and KHN.