Yves here. As Covid-19 stories and Festival of Kamala fade a bit, the latest phase of long-running trends comes back into focus. This piece ties into other reports this week, of the melting of the Greenland ice sheet having hit the point of no return, and then the death of the revered glaciologist “Koni” Steffen.

I have to confess I had no idea how much planning it takes to perform an ice core study. 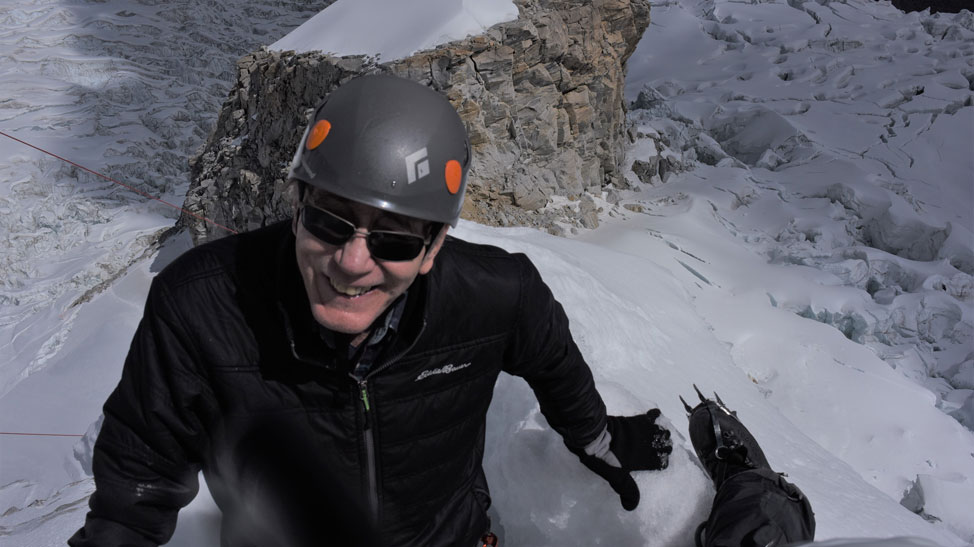 Lonnie Thompson of Ohio State on 2019 Huascaran expedition (Photo credit: Todd Johnston)
Scientists are rushing to sample the cores of rapidly melting glaciers and ice sheets, hoping to preserve a rich record of changes in Earth’s atmosphere and biosphere over the eons. Ice cores contain evidence of trace elements, gas bubbles, dust, pollen, even viruses and bacteria that can be traced back in time to yield vivid images of Earth’s history and prehistory for those who learn to read them.

“Just about anything that’s in the atmosphere gets recorded in the ice,” says Lonnie Thompson, glaciologist and paleoclimatologist at Ohio State University. Thompson has led more than 60 expeditions to sample ice cores from glaciers and ice sheets in a career spanning over four decades. Some sites he has drilled – including glaciers on Mount Kilimanjaro and in Indonesia – have already melted and vanished. Byrd Polar and Climate Research Center at Ohio State holds thousands of meters of preserved ice cores, safely stored in sub-zero freezers. Studying the ice has already yielded secrets of Earth’s past related to volcanic activity, changing vegetation and even human manufacturing techniques.

Hoping to add to the collection, Thompson and other researchers are racing to obtain and preserve ice core samples from remote and, for now at least, still icy places around the globe. They hope to find clues that can help learn about that past, and scientists can use ice core samples and the data they contain to test and verify climate change models to better predict the future.

They also hope that preserving the cores will provide future scientists with samples that they can analyze with technology that may not even exist yet. Thompson can envision a day when samples he has collected now can allow future scientists to answer questions people have not yet even thought to ask.

As glaciers and ice sheets form and layers of snow accumulate, the ice slowly spreads out, compressing the layers and thinning over time. Those layers tell stories about the past, much like rings on a tree record signs of fires, drought years, and seasons of ample precipitation. Similarly, the dust in ice core samples contains information about volcanic eruptions and gives clues about droughts, pollen records, and crop and vegetation changes. Scientists studying ice core samples can even learn how past plagues changed society and culture. Researchers found that ice samples dating back to the plague of the 1300s contained less leadthan would otherwise be expected, indicating a temporary reduction in smelting and industry during the time.

Thompson and some other scientists believe the COVID-19 pandemic may be observable in future ice core samples. Quarantines and restricted movement led to a reduction in pollution as people stayed home and industry slowed. Sulfur dioxide, nitrogen dioxide, and other emissions were reduced in many areas, if only temporarily. Future glaciologists may be able to detect lower levels of nitrates and sulfates in ice, providing a unique snapshot in time.

Studying ice cores isn’t for the faint of heart. Researchers must travel to Earth’s most isolated regions to collect samples, from Greenland and Antarctica to the slopes of tropical mountains with rapidly melting glaciers. It is always challenging logistically to get a team of researchers to where the ice is, and ice coring work typically occurs in extreme conditions.

“It’s a truly bizarre and wonderful experience,” said Richard Alley, Penn State glaciologist and geologist. In over 40 years studying ice, Alley has spent a lot of time braving extreme weather in polar regions. He has been rewarded with otherworldly scenes while collecting samples and data.

Working with fragile scientific equipment in the most remote stretches of the globe leads to its own set of challenges. Researchers have to be resilient, flexible, and creative.

“The field is hard,” Alley says. “Drilling a two-mile-long core of ice is hard. Things always are going to go wrong. The people who do the drilling, the science team, and the whole group just show amazing levels of resilience and innovation to try to get these things built.” He notes they return to their homes and laboratories with the data and ice cores they came for, but he says, “it doesn’t always start working the way it was supposed to.”

Alley says samples from his projects are typically shipped to the National Ice Core Laboratory in Lakewood, Colorado. There, researchers carefully slice the cores, providing samples to various teams who perform analyses of everything from dust to isotopes. They also are able to melt a sample from the inner core – a location where it could not have been contaminated by touching anything – and they carefully analyze the stream of meltwater.

Alley’s work mainly focuses on the poles – both the Arctic and Antarctic – and he finds some advantages to those research locations, including often being able to fly directly to the research site via ski-equipped aircraft. However, he also points out the necessity of assessing ice samples in other parts of the world. “The poles are easier in a lot of ways – there’s no meltwater, it’s cold, and you can get really, really nice records,” he says. “But it’s really valuable to be able to get closer to where people are.”

Even with the Best-Laid Plans, Surprises Are Common

While conducting research in largely uninhabited polar regions presents an array of challenges, so too does working in the tropics.

Researchers spend years preparing for an ice core drilling project, and Thompson says it can take four or five years of planning and preparation before it’s time to head to a field location to collect data. During this time, he says, researchers work on putting a capable team together, sourcing all the equipment they will need, embarking on a massive logistics effort, and working with national and local governments as well as local people. But despite their preparatory efforts, trips don’t always go as planned.

In 2019, Thompson’s team of researchers was on the Peruvian mountain of Huascarán when they received word they needed to leave the mountain within 12 hours because locals did not want them there. With teams spread out over the mountain, Thompson explained that the time frame was impossible to meet and negotiated for two days to extract his team. Leaving the mountain in a hurry, the team was forced to leave ice cores and equipment behind, hoping they could retrieve them later.

Thompson met with local people to learn more about their concerns. He learned local residents mistakenly believed his team was planning on developing a gold mine and extracting resources. They were concerned about potential pollution, and when they heard about the ice drilling project, they were upset foreigners were taking ice and removing it from Peru. He says the locals were also concerned that Peru’s president came to visit the drilling site via helicopter, bypassing the local villages and not listening to peoples’ concerns about an array of issues – including those unrelated to the scientific research.

Ultimately, the discussions resulted in Thompson’s receiving permission to remove his team’s equipment and the ice cores from the mountain with the assistance of an Mi-17 helicopter from the Peruvian government.

On a 2010 expedition to a mountain in New Guinea, Thompson’s team was planning to drill an ice core from a glacier on a rainforest mountain. A warming world meant the glacier was in imminent peril and, if they didn’t obtain samples soon, they might never have the chance. While they received governmental permits and authorization, they soon learned when they arrived in the area that tribal leaders were not on board with the project. Thompson engaged in discussions with people, hoping to find a solution.

“In the religion of this tribe the arms and legs of their god are the mountains and the valleys, and the head of the god is the glacier,” Thompson explains. “And, in their words, we were drilling into the skull of their god to steal their memories. And I said, that’s exactly what we’re doing – we are trying to capture those memories before they disappear because these glaciers will disappear.”

By the end of the meeting, the tribes granted permission to continue with the project, drilling the ice cores and bringing them back to Ohio to keep them – and the knowledge they contain – safe for future generations.

Part of the reason researchers believe it is so important to preserve ice core samples while they still exist is so future scientists can one day use technologies perhaps not even imagined today to further analyze them.

“The beauty of ice is that it records everything that is in the environment,” Thompson says. “Unfortunately in today’s world, and in the future, many of these archives are going to disappear and we will lose that history.”

Editor’s Note:  Considered among the very top tier of the world’s most respected glaciologists, Thompson and Alley share some common bonds: Each is a Member of the National Academy of Sciences, and each has been an author and/or subject of public broadcasting documentaries and books. Thompson is a 2005 winner of the National Medal of Science, awarded by the President of the United States. Alley, widely recognized as a highly innovative and charismatic climate science communicator, is the force behind the PBS documentary “Earth: The Operators’ Manual” and the companion book.