Yves here. Universal testing and isolation were the South Korea approach, except they geared up so quickly, their testing only had to be aggressive and extensive.

By Reda Cherif and Fuad Hasanov, Senior Economists at the IMF. Originally published at VoxEU

Lockdown measures, contact tracing, and widespread testing have dominated the policy responses of many countries to the Covid-19 crisis. This column argues that a universal testing and isolation policy is the most viable way to vanquish the pandemic. Its implementation requires an epidemiological, rather than clinical, approach to testing, and requires the ramping up of testing kit production in order to achieve a scale and speed that the market alone would fail to provide. The estimated cost of universal testing is dwarfed by its return, mitigating the economic fallout of the pandemic.

The world is racing against time to vanquish Covid-19, the disease resulting from the novel coronavirus that spread rapidly across the world in early 2020. After millions of cases and hundreds of thousands of deaths (Johns Hopkins University 2020), extraordinary strains on healthcare and medical personnel, national lockdowns, and economic fallouts unseen since the Great Depression of the 1930s, the world has yet to see the emergence of a viable global strategy (Baldwin and Weder di Mauro 2020a, 2020b).

A Return to Normalcy

As lockdowns were implemented to ‘flatten the curve’, the debate about saving lives or saving jobs ensued (Chang and Velasco 2020). However, the policy debate should be about expanding the frontier of how much economic activity could be pursued while keeping the epidemic in check (Budish 2020). What is needed is an assessment of the viability of policies in terms of the speed of reopening the economy with minimal restrictions, the efficiency in keeping the epidemic in check in different contexts (advanced versus emerging and low-income countries), as well as policy cost. Keeping minimal restrictions on the majority of economic activities is key to ensuring policy viability. Policies based solely on strict non-pharmaceutical interventions (e.g. full or age- and geography-dependent lockdowns) would not be viable as they would slow down the epidemic, while not helping reopen economies fully and safely. Many of these measures, such as lockdowns or contact tracing, would also be difficult to implement in developing countries, or past a certain epidemic stage.

We argue that the most viable way to vanquish the pandemic is a universal testing and isolation policy (Cherif and Hasanov, 2020). Using a modified Susceptible, Infected, and Recovered (SIR) model with R0 of 3 and a 25 percent leakage of the quarantined, we argue that a continuous universal testing and isolation of the infected would keep the epidemic in check. Combined with “smart” testing strategies such as group (pooling individual samples for testing) and periodic testing as opposed to random testing (e.g., using blocks of population by a geographic grid) the testing rate required would be about 5 percent of the population per day instead of 20–30 percent of the population with random and individual tests.

An epidemiological Approach to Testing

To succeed, policymakers should adopt an epidemiological, rather than clinical, approach to testing, sacrificing accuracy (sensitivity and specificity) for scalability, convenience, and speed. The aim of this approach is to identify (and isolate) ‘enough’ infected individuals, rather than to provide a precise clinical diagnosis. Rapid serological tests for antibodies (IgM) or antigens, which are similar to pregnancy tests, and Point-of-Care (POC) rapid molecular tests could be good candidates to reach a large share of the population. Including ‘symptom-based’ tests to identify infected patients could further reduce the number of required tests to below 5%. This type of ‘test’ (including fever measurement) could be implemented immediately, albeit at the cost of isolating many false positives, but still at a fraction of the cost of a lockdown.

Universal testing could be further complemented with other ‘smart strategies’. Mobility restrictions in and out of urban centres could help reduce contagion across cities and regions, and minimise the number of tests needed overall. In an SIR model with mobility and universal testing, we show that with the same testing rates, restricting movement to ‘the hub’ by 75% reduces infections from day 1. In contrast, reducing movements to any grid by 75%, or to all grids by 25%, results in a resurgence of infections, or ‘second wave’ (Figure 1). This approach promotes the idea of ‘urban villages’, and minimises restrictions on economic activities. In the same vein, prioritising potential infection clusters (e.g. hospitals, care homes, prisons, schools, and public gatherings) could reduce the spread of the virus spread substantially, since approximately 20% of infected cases generate around 80% of subsequent transmissions due to ‘super-spreader events’ (Adam and Cowling 2020). Light non-pharmaceutical intervention measures such as maintaining distance in public and mask wearing could further reduce transmission rates.

Figure 1 An SIR model with mobility across four grids: Travel restrictions by (1-a) percent (grid 1 is a hub) 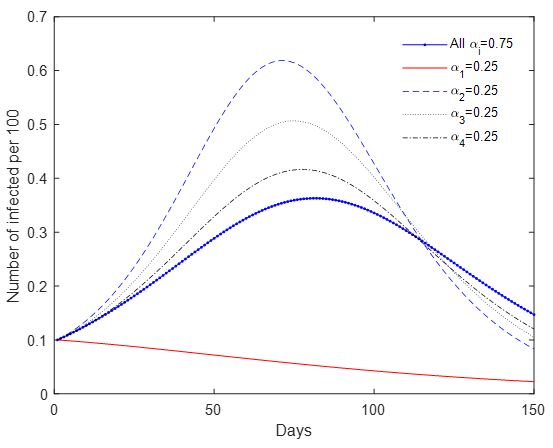 To ‘squash the curve’, universal periodic testing needs to be continuous, until a safe vaccine or a cure is developed. An early warning system could help monitor and control the spread of the infection. Alternative methods could be used to detect infection clusters, such as testing for the virus in sewage systems, a method used to assess the vaccination campaign against polio (Mallapaty 2020).

Countries or regions that have used large-scale testing have slowed the epidemic substantially. At the onset, South Korea conducted widespread testing that helped it keep the epidemic spread in check (Cheong 2020). In Italy, the region of Veneto achieved a much slower progression of the epidemic, mostly due to its large-scale testing and isolation (which included asymptomatic people), in comparison to Lombardy. The small town of Vò (in Veneto) conducted universal testing of its population and isolated the infected before and after the two-week lockdown; the virus was wiped out as a result (Zingales 2020).

Although there is a growing chorus of voices arguing that testing is key, there is no consensus on how much testing is needed (Romer 2020a, 2020b, Siddarth and Weyl 2020, Baldwin 2020, Berger et al. 2020, Brotherhood et al. 2020, Eichenbaum et al. 2020, Bethune and Korinek 2020, Acemoglu et al. 2020, and Piguillem and Shi 2020). Our own simulation results – about 5% of the population per day – call for a smaller number of periodic tests than Romer (2020b), and a broadly similar number of tests as proposed by Siddarth and Weyl (2020), in order to keep the epidemic in check. Testing rates in many countries (including smaller economies) fall far below these rates. By late June 2020, the maximum daily (on a 7-day rolling average) population testing rates have been achieved by Luxembourg (0.9 percent), Bahrain and Iceland (0.5%), and Denmark and Lithuania (0.25%) (Roser et al. 2020).

Although experts agree on its ability to ‘squash the curve’, universal testing has not gained much traction because it has been considered ‘infeasible’. Indeed, the sheer number of tests needed compared to current production in each country, and the difficulty of scaling up collecting and processing samples, could suggest that this task is impossible (e.g. Kofler and Baylis 2020, Rose 2020). Huge shortages of ventilators and personal protective equipment across the world, including in many advanced economies, seem to confirm this view (e.g. Azmeh 2020, Bradley 2020).

The perception of the infeasibility of universal testing stems from the adoption of a clinical approach to testing, as well as a laissez faire approach to production. Even the rate of approximately 5% of population a day (with a smart epidemiological approach and cheaper tests) would still be far beyond the existing production capacity of most countries and could seem infeasible if one ignores market failures.

Indeed, the market for tests in the context of a raging pandemic is laden with market failures stemming from uncertainty, capacity constraints, coordination failures, externalities, and market power. Industrial policy is needed to correct these failures (Cherif and Hasanov 2019) and ramp up the production of tests. We sketch such a strategy to define clear objectives in terms of testing rates. Policymakers should: set up an appropriate institutional apparatus to coordinate government agencies and the private sector along the whole value chain, align incentives (e.g. financing and intellectual property), and enforce accountability when support is provided (Cherif and Hasanov 2020).

The feasibility of a rapid scale-up in the production of tests is akin to war mobilisation efforts during WWII, when the US and the Soviet Union drastically increased their production of military equipment at an unprecedented scale and in a record amount of time. For example, ammunition factories were built from scratch in as little as three months. The existential threat of war motivated policymakers to spring into action. Although not trivial, the current task is minuscule in comparison, yet the danger of an endemic pandemic is real and entails enormous costs. The global cost of testing is only a small fraction (about 1-2 months) of the 2020 global economic losses and fiscal stimulus (about $20 trillion). To put this into perspective, the number of testing kits needed is only a fraction of the number of soft drink cans consumed globally (about a trillion per year), as Romer (2020b) has also pointed out for the US.

Global support and coordination could make universal testing possible. Similar to the huge government resources invested in vaccine development, the same strategy is needed to develop rapid and convenient tests. If enough firms pool their resources (and there is substantial public funding, support, and coordination), most countries could meet the demand for tests relatively fast. Recent developments give hope that a vaccine, or a cure, could be found within a year, but there is no guarantee. Betting only on a safe vaccine or a cure to vanquish the pandemic illustrates the ‘incredible certitude’ of policymakers (Manski 2019). With the enormous costs and risks of a protracted crisis (especially in developing countries), universal testing, which could be implemented in a matter of months, would be a viable alternative strategy.

Authors’ note: The views expressed in this column are those of the authors and do not necessarily represent the views of the IMF, its Executive Board, or IMF management.