Yves here. I hope readers with expertise or contacts in mass garment procurement will pipe up. Due to the hour, I was not able to get Jerri-Lynn to weigh in, and even then, I am not sure her contacts would have insight into how reforms in Bangladesh affected workers.

The article treats workers’ wage declines in 2016 as the result of 2013 reforms seems like a stretch, particularly given the lack of testing for, or even interest in, other factors. For instance, the authors point out that Bangladesh is the #2 provider of ready-made garments, with China the leader. China depreciated its currency by nearly 15% against the dollar from mid 2013 to the end of 2016. By contrast, the Bangladesh taka was flattish this entire time against the dollar. That alone would put substantial price pressure on Bangladesh factories, and worker wages have more “give” than energy or raw materials inputs.

The collapse of the Rana Plaza factory building in Bangladesh in April 2013 is widely considered the worst accident in the history of the garment industry. It intensified local and international attention paid to working conditions in the industry and resulted in a series of reforms, including a minimum wage and high-profile but voluntary audits examining safety. This column studies the effects of those reforms on workers and finds that while working conditions increased after the reforms, women’s wages increased at first but fell in the longer run, as did the likelihood of having a formal work contract.

The collapse of the Rana Plaza factory building in Bangladesh in April 2013 killed over 1000 workers and injured about 2500. It is widely considered the worst accident in the history of the global garment industry, and the world’s worst industrial disaster since the 1984 Bhopal gas tragedy in India (Reuters 2017). In its aftermath, local and international attention paid to the garment sector intensified, resulting in a series of new policies and changes to the behaviour of retailers. Direct reforms included an increase in the minimum wage and high-profile but voluntary audits examining safety. Indirectly, retailers may have become hesitant to buy from factories that subcontract or seem unlikely to abide by labour regulations. While the intended goal of the implemented policies was to raise salaries and improve working conditions, some feared that these reforms which raise costs for garment factories could ultimately hurt workers.

The ready-made garments (RMG) sector is widely considered to be a key contributor to Bangladesh’s robust economic growth, poverty reduction, and women’s empowerment. The sector’s share of total exports increased from 53% in 1995 to 83% in 2017, with its exports reaching about  $28.1 billion (Farole et al. 2017). The export share of GDP tripled between 2003 and 2017, and Bangladesh is now the world’s second largest garment exporter after China. The sector provides jobs and earnings opportunities to over 4 million low and semi-skilled workers and represents over 40% of the total industrial employment in the country. Moreover, the large expansion of the garment industry has provided employment opportunities to women, changing their lives and decisions on schooling, marriage, and childbearing (Heath and Mobarak 2015). Any reforms to this sector hence affects a large number of workers and their families.

In a recent paper (Bossavie et al.  2019), we evaluate for the first time the net effects of these post-Rana Plaza reforms on workers in the RMG sector in Bangladesh. We use six rounds of the Bangladesh Labor Force Survey, spanning 2003 to 2016, and employ a difference-in-difference estimation strategy that compares workers in the garment sector to workers in synthetic control groups of industries. Those were identified separately by gender to match the garment industry outcomes on four key outcomes: wages, an index of working conditions, hours of work, and whether the worker receives a contract. We show that estimated treatment effects are very similar when separate synthetic control groups are used for each outcome. Each survey was collected in all four quarters of the year, allowing us to separately examine short-term effects (in the remainder of 2013) and medium-term effects (in 2015 and 2016).

We begin by examining wages. On the one hand, wages increase due to the minimum wage increase or pressure from buyers to raise wages. On the other hand, wages might also fall as firms shift spending on total compensation more towards working conditions. These effects could vary by gender and time frame, and we indeed find that a close-to-zero and insignificant overall effect on wages conceals substantial variation (Figure 1). In particular, women’s wages on average increased by 18% relative to men’s after Rana Plaza. This average is the combination of an overall wage increase of 20% in 2013, a zero effect in 2015, and a decrease of 25% in 2016. By contrast, the wages of male workers in the garment industry had remained virtually the same by the end of 2016. Our quantile regressions also show evidence for some distributional effects. We find that higher wage workers appear to lose more – suggesting that the effects of international pressure may reach lower paid workers in ways that certification may not, if it results in minimum wage increases. 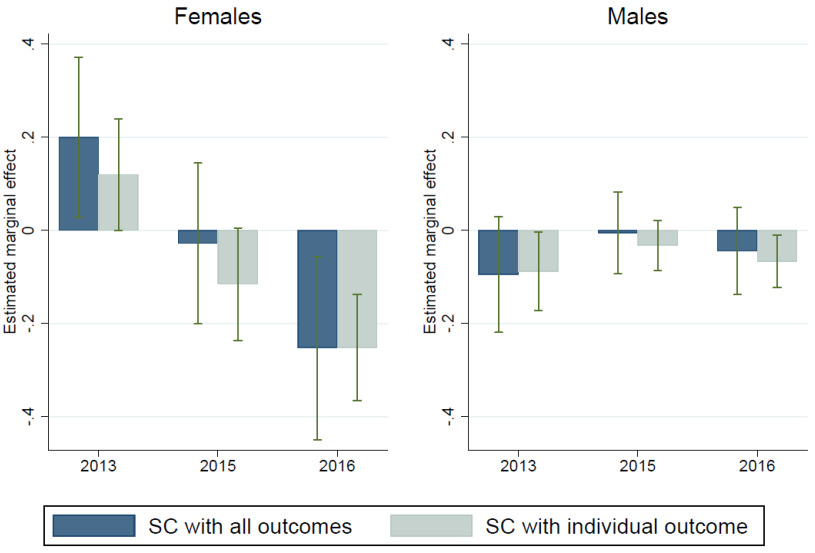 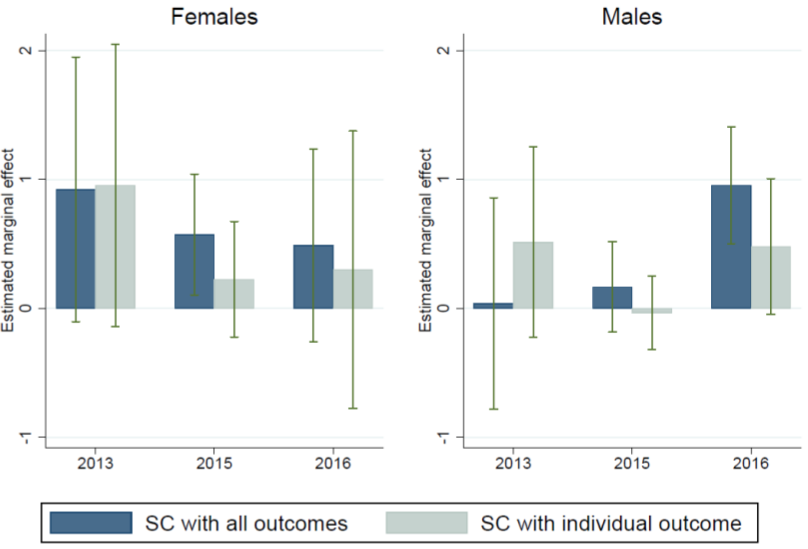 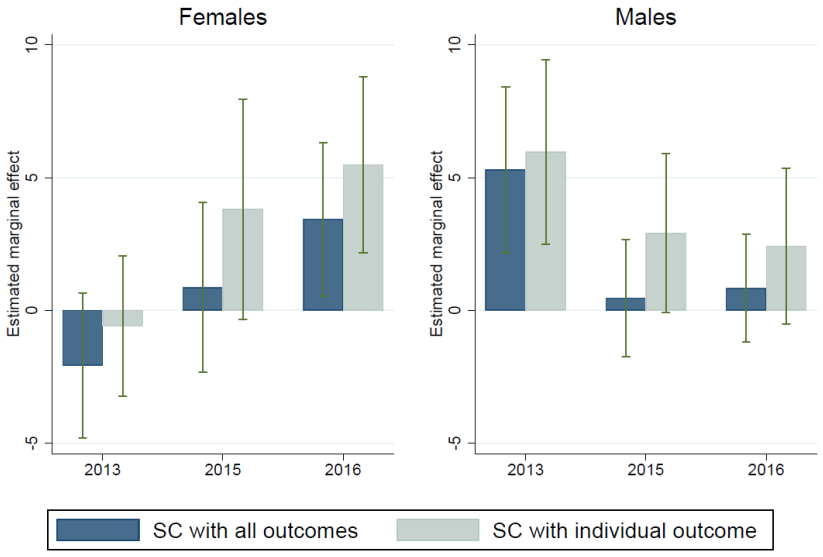 The international garment market is highly competitive, and Bangladeshi factories have faced simultaneous pressures to produce at lower costs while improving working conditions. The resulting cost-cutting measures may particularly hurt female workers, who have both limited employment options outside of the RMG sector and who particularly value improvements in working conditions (Khosla 2009, Begum et al. 2010, Gibbs et al. 2019, Subramanian 2019). In this context, our results suggest that international pressure post Rana Plaza, which was focused on working conditions, was indeed successful in improving working conditions, but factories may do so at the expense of women’s wages and job security in the longer run. 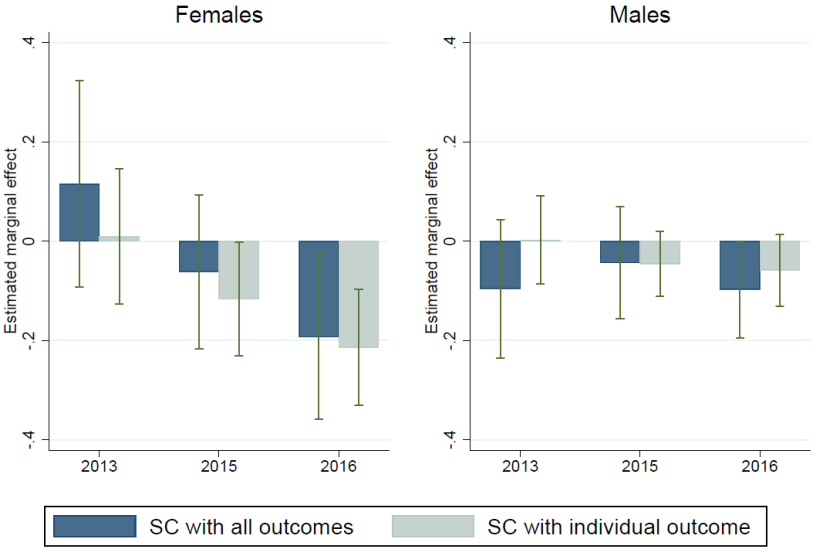 Our results hence speak to a literature pointing out that regulations intended to help workers may raise the cost of hiring workers and thus have unintended negative consequences (Besley and Burgess 2004, Botero et al. (year?), Parker, Foltz and Elsea 2016). We add to this literature by showing that international scrutiny can have similar unintended effects as formal regulation. Moreover, our estimated treatment effects reflect the net effects of direct reforms and indirect responses, which may kick in at different points in time. Some of the direct regulatory reforms, such as an increase in the minimum wage would have an immediate effect, if any, on workers’ wages. Other responses, such as increased compliance with safety requirements, may take more time to materialize and also trigger indirect responses by employers over time that can also affect workers’ outcomes. We find that the net effects of the reforms indeed greatly vary over time, with effects on workers’ wages and employment security being initially positive but becoming more negative over time.

Together, our results paint a complex picture of the net effect on workers’ welfare. The fact that working conditions improved is important, given high baseline levels of reports of harassment and abuse. For example, 37% of female garment workers reported abuse in the first quarter of 2013 (i.e. immediately before the Rana Plaza collapse). While the short-term wage increase likely helped many workers, if the trend apparent by 2016 continues, the wage decreases are the predominant force. The decrease in the likelihood of having a contract for female workers suggests additional welfare losses, as hypothetical choice experiments have indicated that job stability is the most valued aspect of formal work among Bangladeshi workers (Mahmud et al. 2019). While we cannot quantify whether the overall effect on welfare is positive or negative (as we lack data to estimate workers’ relative preferences between different job aspects), an unambiguous lesson from our results is that the welfare consequences of international scrutiny may differ in the short term versus medium-term. Hence, research on the effects of international scrutiny and other policies to help workers should seek to include as long a time horizon as possible.