Yves here. I am running this article as a critical thinking exercise. On the one hand, it is not difficult to make a case that the accounting net worth of most companies is a questionable measure, for instance because pretty much any public company of significance has made acquisitions and paid a handsome premium over the seller’s market value….when over 3/4 of deals don’t work out due to buyer overpayment.

Even though this post is about non-financial corporations, the financial/non-financial distinction isn’t as tidy as it seems. Multinational run their Treasuries as profit centers; many earn more than 25% of their profits from trading. That means the issues Steve Waldman raised about the net worth of banks apply to them to a degree:

The bottom line is simple. The capital positions reported by “large complex financial institutions” are so difficult to compute that the confidence interval surrounding those estimates is greater than 100% even for a bank “conservatively” levered at 11× tier one capital.

Errors in reported capital are almost guaranteed to be overstatements. Complex, highly leveraged financial firms are different from other kinds of firm in that optimistically shading asset values enhances long-term firm value…

When I say stuff like “confidence intervals surrounding measures of bank capital are greater than 100%”, what does that even mean? Capital does not exist in the world. It is not accessible to the senses. When we claim a bank or any other firm has so much “capital” we are modeling its assets and liabilities and contingent positions and coming up with a number. Unfortunately, there is not one uniquely “true” model of bank capital. Even hewing to GAAP and all regulatory requirements, thousands of estimates and arbitrary choices must be made to compute the capital position of a modern bank. There is a broad, multidimensional “space” of defensible models by which capital might be computed. When we “measure” capital, we select a model and then compute. If we were to randomly select among potential models (even weighted by regulatory acceptability, so that a compliant model is much more likely than an iffy one), we would generate a probability distribution of capital values. That distribution would be very broad, so that for large, complex banks negative values would be moderately probable, as would the highly positive values that actually get reported.

Finally, I have difficulty with the notion that share prices in secondary markets have much meaning, despite how commonly they are held as investments. Unlike bonds, shares are a legally weak and ambiguous promise, basically “We’ll pay you dividends if we make money and feel like sharing” and “You have a vote but we can dilute it at any time, and we have staggered boards too, so pound sand.” Share prices of most companies move 100% in a year. How can you say the value at the low point is any more valid than at the high point? As Warren Buffett has said, in the short term, the stock market is a popularity contest, while in the long term, he contends it is a weighing machine.

Similarly, even though market cap is widely used as a key metric of company value, that price is set at the margin. It isn’t the price sellers can expect to realize if every one, at the same time every day, decided to cash in.1

By Steve Roth (steve@steve-roth.com),  a serial entrepreneur and the publisher of Evonomics.com and Sabri Öncü (sabri.oncu@gmail.com) is an economist based in İstanbul, Turkey. A slighly edited version of this article first appeared in the a href=”https://www.epw.in/journal/2020/28-29/h-t-parekh-finance-column/wealth-corporations.html”>Economic and Political Weekly on 11 July 2020

“Financial Assets = Liabilities.” It’s one of the great accounting-identity truisms of economic understanding — both among traditional, mainstream economists, and even (especially) among many heterodox, “accounting based” practitioners. It seems obvious: When a company issues and sells bonds, it posts a liability to its balance sheet; the bond buyers hold financial assets on theirs.[1]

The problem is, that truism isn’t even close to true. The most obvious example is corporate equity shares — financial assets by any definition. The asset value of outstanding shares is vastly larger than firms’ book value, shareholders’ equity — the bottom-line balancing item on the liability side of firms’ balance sheets. Over the last half century, the market-to-book ratio of the S&P 500 has ranged between 2X and 5X. 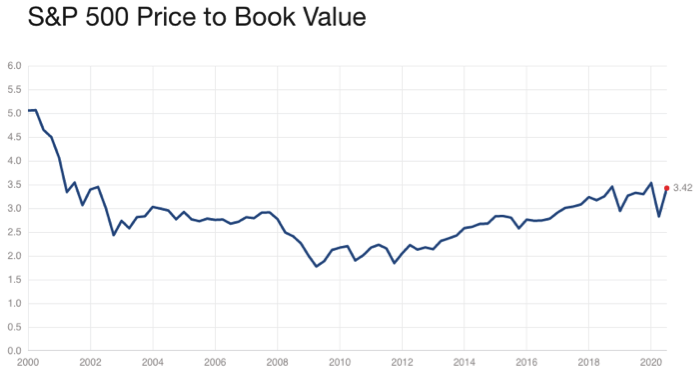 The discrepancy exists even for U.S. Treasury bondsoutstanding, though that discrepancy is quite small.

As soon as a new financial asset is issued, at least if it’s tradeable in the markets, its price starts changing. Asset holders look at their brokerage statements, which are marked to market instant by instant, and see that they have more or less assets. Meanwhile the liabilities on issuers’ balance sheets remain (mostly) unchanged. Financial Assets ≠ Liabilities.

Economists can hardly be blamed for this incorrect understanding. The national accounts themselves obscure this reality. If you look at the Flow[2]tables in the Fed’s quarterly Financial Accountsor “Flow of Funds,” for instance, you won’t find any accounting for changes in asset holdings due to changes in market prices — revaluation. So those tables can’t explain changes in assets and net worth from period to period. They’re accounting-incomplete — certainly so if you compare them to the Consolidated Statements of Comprehensive Income that publicly traded corporations are required to publish quarterly.[3]

The same is true, even more, of The National Income and Product Accounts (NIPAs) — though those accounts make no claim or aspiration to such complete accounting; they don’t include anything resembling sectoral balance sheets.

How can we make An Inquiry into the Nature and Causes of the Wealth of Nationsabsent a comprehensive accounting of wealth accumulation?

Happily, there is a set of complete, fully stock-flow-consistent sectoral accounting statements available, based on the System of National Accounts(SNA) standards developed and promulgated by the United Nations and allied institutions. Think of them as Generally Accepted Accounting Practices (GAAP), but for countries. In the U.S., the SNA-compliant accounts are called the Integrated Macroeconomic Accounts (IMAs). They were released only in 2006, with quarterly tables released in 2012 (annual-only for financial subsectors). Their data extends back to 1960. You’ll find them as the “S” tables at the end of the Fed’s quarterly “Z.1” or Financial Accounts report. They’re also very conveniently available in interactive form here, and all the sectoral tables are available in a single Excel workbook here.

In the IMAs, each sector has a balance-sheet account (with Net Worth as the bottom-line item), and crucially, a Revaluation account tallying “Changes in net worth due to nominal holding gains/losses,” broken out for various asset classes. With this inclusion, each sector’s table fully explains change in net worth during an accounting period.

But that finally returns us to the title of this article: the net worth of firms. There is what seems to be a very particular oddity in the IMAs, which on examination yields a rather revelatory understanding of economies and economic statements:

In the twenty-five years since 1995, according to the IMAs, the net worth of the U. S. nonfinancial firms sector has been positive in only two.

It’s pretty eye-popping. “Nonfinancial firms aren’t worth anything, are worth less than nothing?” No. Rather, these notional net worth figures reveal an important accounting and economic reality, embodied in a quirk of the IMAs’ accounting: net worth is meaningless for firms.Or to put it another way: unlike households, firms don’t own their own net worth. Their bottom-line, right-hand side balancing item is not net worth, it’s shareholders’ equity. The possessive apostrophe says it all: shareholdersown firms’ net worth.[4]

And ultimately, all that value is owned by the household sector. (This ignoring the Rest of World sector, non-domestic ownership, for simplicity.) Sure, firms own shares in firms which own shares in firms, but ultimately households own it all. Because since 1865  in the U.S., nobody can own “equity shares” in households, in people. People own firms but firms don’t own people. It’s a one-way, asymmetrical ownership relationship. The IMAs reflect that asymmetry.

And this is how the IMAs’ apparent quirk arises, for three reasons. First, there’s an attempt to present all sectors similarly, with net worth at the bottom. (Even though sectors aren’t all treated the same in other matters, for good and necessary reasons; their accounting realities are fundamentally different.) That’s problematic when firms don’t actually have anything that’s meaningfully called net worth.

Second, the IMAs post firms’ equity liabilities to their balance sheets as just another liability — not broken out as a singular item as in corporate reports. Think: “Liabilities and Shareholders’ Equity.”

Third, The IMAs post firms’ equity liabilities not at book value, but at market value. Another oddity results: when share prices go up, firms’ liabilities do as well, so their net worth goes down. It’s kind of wacky.

Again, this results from a desire for accounting consistency and closure. The firm sector’s market-priced equity liabilities equal households’ market-priced equity assets. What goes missing is a key measure for firms: book value, the standard measure of shareholders’ equity. It’s quite easy to calculate: subtract firms’ equity liabilities from their total liabilities, and subtract that from their total assets. It’s annoying that the IMAs don’t do that for us as the firms’ bottom line, or at least in a memo item. But the exercise is a great way to understand the underlying economic and ownership reality that the IMAs reveal so well.

Understanding the Wealth of Nations

Some may be wondering, “Why does all of this matter?” It’s important because it reveals a giant lacuna in economists’ understanding of wealth accumulation, the wealth of nations, and the relationship between wealth and “real capital.” Contrary to a quite ubiquitous conception, for instance, neither the household sector’s Net Saving (in the Current Account), or Capital Account accumulation, comes even close to explaining the sector’s wealth accumulation.

Not all of that $27 trillion materialized magically, of course. The firm sectors’ book value (roughly, their cumulative saving on behalf of their household owners) also increased over that period, by $21 trillion. That explains much, but not nearly all, of the equity holding gains accrued by households. Even in this one equity asset category, there’s a $6 trillion remainder, unexplained — equivalent to $48,000 for every American household.

Absent the complete accounting embodied in the IMAs, these quite massive numbers are completely invisible to economists, and their models. The economy doesn’t balance to “saving.” In an important sense, that’s just an artificial, residual balancing item.

The economy balances to net worth: the wealth of nations.

[1]This is the very definition of a financial asset: it has a related liability on another balance sheet. Nonfinancial assets, such as land titles, don’t. All liabilities are inherently financial; the debt is due to someentity, which holds that obligation as an asset on its balance sheet.

[2]Renamed the Transactions tables as of June 2018, with the following note (emphasis added): “As of this publication, the term “flow” is being replaced by the term “transactions.” The concept being referred to, which is the acquisition of assets or incurrence of liabilities, is not being changed. The change in terminology is intended to prevent confusion with the broader concept sometimes called “economic flow,” which is the change in level from one period to the next and is composed of transactions, revaluations, and other changes in volume. The new terminology brings the Financial Accounts of the United States into better alignment with international guidelines in the System of National Accounts 2008 (SNA2008).”

[4]It’s revealing to compare nonprofits, which like households and unlike for-profit firms, don’t have shareholders. They own their own net worth (if anyone does). That’s why they’re included in the household sector accounting, and that sector is properly labeled “Households and Nonprofit Institutions Serving Households” (NPISHes).

1 Please don’t say all those public shares could be bought by private equity. Private equity’s share of global equity is only on the order of 5%.