This is Naked Capitalism fundraising week. 293 donors have already invested in our efforts to combat corruption and predatory conduct, particularly in the financial realm. Please join us and participate via our donation page, which shows how to give via check, credit card, debit card, or PayPal. Read about why we’re doing this fundraiser, what we’ve accomplished in the last year, and our current goal, strengthening the comments section.

He fought wildfires while imprisoned. California reported him to Ice for deportation Guardian

With Deutsche Bank’s help, an oligarch’s buying spree trails ruin across the US heartland ICIJ

Pricing the Term Structure of VIX Futures Policy Tensor. This one’s above my pay-grade. Readers?

How close is a coronavirus vaccine? (free) FT. Handy map of Phase 3 trials: 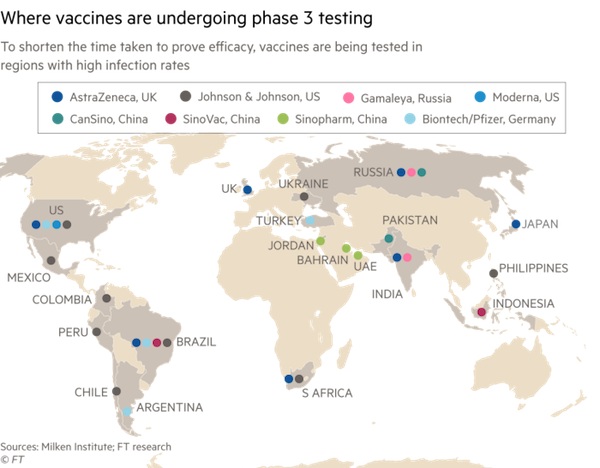 Thousands of passengers on commercial flights may have been exposed to coronavirus in 2020, CDC says CNN. “[W]ithin a 6-foot range for droplet transmission.” Oh.

Changing Age Distribution of the COVID-19 Pandemic — United States, May–August 2020 CDC. “During June–August 2020, COVID-19 incidence was highest in persons aged 20–29 years, who accounted for >20% of all confirmed cases. Younger adults likely contribute to community transmission of COVID-19. Across the southern United States in June 2020, increases in percentage of positive SARS-CoV-2 test results among adults aged 20–39 years preceded increases among those aged ≥60 years by 4–15 days.”

COVID-19 can affect the heart Eric Topol, Science. From the body: “The most intriguing question that arises is why do certain individuals have a propensity for heart involvement after SARS-CoV-2 infection? Once recognized a few months into the pandemic, the expectation was that cardiac involvement would chiefly occur in patients with severe COVID-19. Clearly, it is more common than anticipated, but the true incidence is unknown. It is vital to determine what drives this pathogenesis. Whether it represents an individual’s inflammatory response, an autoimmune phenomenon, or some other explanation needs to be clarified.”

Covid-19: Risk of death more than doubled in people who also had flu, English data show British Medical Journal. Summarizes a preprint. “An analysis by Public Health England (PHE) of cases from January to April 2020 also found that people with the two viruses were more at risk of severe illness. Most cases of coinfection were in older people, and more than half of them died.”

2) new report, however, did not find that these mutations have made the virus deadlier. All viruses accumulate genetic mutations, and most are insignificant, scientists say. Coronaviruses are relatively stable as viruses go, because they have a proofreading mechanism.

How did Vietnam bring the spread of coronavirus to a halt — again? ABC Australia

The cost of Covid-19: The impact of coronavirus on the UK’s public finances (PDF) Institute for Government

How Italy Snatched Health From the Jaws of Death Foreign Policy

Trump Talks Up Need for Full Court as He Casts Doubt on Election Bloomberg. Granted, a 4-4 tie on Trump v. Biden wouldn’t be a good look…

[crosstalk 00:08:48] Right here, Mr. President, real quickly. Win, loser, draw in this election. Will you commit here today for a peaceful transfer of power after the election, either-

Well, we’re going to have to see what happens. You know that I’ve been complaining very strongly about the ballots. And the ballots are a disaster.

I understand that but people are rioting. Do you commit to making sure that there’s a peaceful transferal of power?

Politics is an American industry Interfluidity

Tribal Truce — How Can We Bridge the Partisan Divide and Conquer Covid? New England Journal of Medicine

Mark in the Middle The Verge

Grand jury indicts 1 of 3 officers in Breonna Taylor shooting. But not for her death Courier-Journal

A Jefferson County grand jury Wednesday indicted Brett Hankison, 44, on three counts of first-degree wanton endangerment. Jurors said several bullets he fired outside Taylor’s apartment March 13 went into a neighboring unit where a pregnant woman, a man and a child were home.

But neither he nor two other Louisville officers who fired their weapons at Taylor’s apartment — Sgt. Jonathan Mattingly and Detective Myles Cosgrove — were charged with killing Taylor, an unarmed Black woman.

Interestingly, Roy Bryant and J.W. Milam were acquitted for the murder of Emmett Till on September 23, 1955, 65 years ago.

What Is ‘Wanton Endangerment,’ the Charge in the Breonna Taylor Case? NYT (KW).

My Statement on the Breonna Taylor Grand Jury Decision: pic.twitter.com/domdlBVT65

Even amidst the profound grief & anger today's decision generated, violence is never & can never be the answer. Those who engage in it must be held accountable. Jill & I are keeping the officers shot tonight in Louisville in our prayers. We wish them both a swift & full recovery.

Very fine people on both sides?

“The streets” [genuflects] vs. the workplace:

?Quick reminder that Louisville is home to the UPS worldport, which processes a huge portion of national shipping volume, upwards of 2-3 million packages daily. If this hub were to shut down for any reason, even for a few hours, the economic effect would be enormous.?

“Requiring both crew members to turn the trim wheel simultaneously in a non-normal scenario is extremely undesirable and goes against all philosophies of having one pilot fly and one run the QRH [quick reference handbook: reading out the emergency checklist]. No flight control system should require both pilots to operate it at any stage, let alone in an emergency.”

Living on the edge: More than 4 in 10 households face serious financial problems during pandemic: POLL ABC

Popular Radicalism in the 1930S: The Forgotten History of the Workers’ Unemployment Insurance Bill The Hampton Institute

The 500 Greatest Albums of All Time Rolling Stone. Refreshing the canon….

What Is Math? Smithsonian 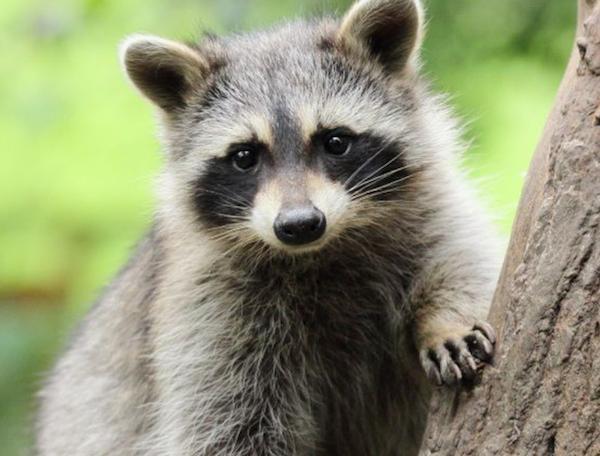