Yves here. I was shocked to learn of David Graeber’s untimely death. I met Graeber at the instigation of Michael Hudson, who brought Graeber to dinner at Sakagura, a sake bar in Manhattan. If my memory serves me right, this was fall of 2011, shortly after the publication of Graeber’s blockbuster, Debt: The First 5000 Years, and either during or shortly after Occupy Wall Street camped out in Zuccotti Park. Graeber was energetic and full of academic and leftie political gossip. He kept checking his phone because he was looking to join some fellow activists later in the evening.

Our differences over tactics (we had a dustup over Strike Debt’s Rolling Jubilee) don’t diminish the considerable impact that Graeber had on the understanding of how debt operated in ancient societies and how the power balance between borrowers and lenders has changed in the modern era.

This is not at all what I thought I’d be writing about tonight, let alone what I wanted to do. I am writing a eulogy for my friend and intellectual companion, David Graeber. 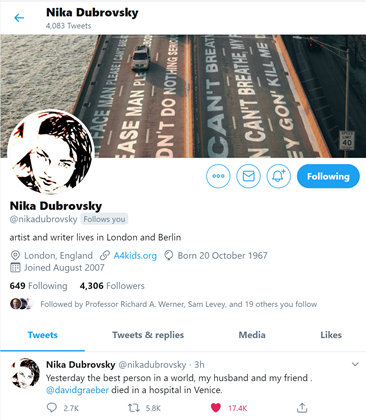 These are the tweets and DMs that I first sent in reaction to this shock:

Oh David! @davidgraeber. . They say only the good die young, but why did you have to be one of them? There’s even more bullshit in the world now that you are no longer with us. It was a pleasure to know you, and it is a tragedy to say goodbye.

I’m an agnostic and so was David @davidgraeber. But if he’s doing anything at all right now, it’s an anthropological study of Heaven. Preceded by a brief study of Hell, but just for comparative reasons. The Devil was sad to see him go.

I’m agnostic, but for the very first time, I am wishing that there is life after death, I told @stacyherbert , when she wrote “He’s actually trending in America now on Twitter! I wonder if he would be mortified by that or laughing his ass off . . . I suspect the latter?”

So yes David, this fellow agnostic wishes he’s wrong, and I hope you can read this and are laughing at what a sentimental twat I’m being. And being jealous of me getting smashed on Tequila as I write this—though I suppose Heaven has much better Tequila than we get down here on the Purgatory that is Earth in 2020.

Personally, David’s death feels as if 2020 is a mugger, who’s watched me escape relatively free from the chaos of 2020, and thought “OK boy, I’m going to get you where it hurts”.

So congratulations, 2020, I feel—at least to some tiny degree—the suffering that people are going through now, from losing a loved one to the Coronavirus.

I’d been exempt until now from 2020’s travails. I was in Amsterdam during Sydney’s fires, which threatened my family, but fortunately they weren’t affected. I jumped ship from Amsterdam to Thailand when it became apparent that Thailand was doing a much better job of containing it; now it has in fact eliminated it—though in more “2020 Sucks” news, Thailand has just reported its community transmission/unknown origin first case in over 100 days).

In a year of tragedy, I’ve generally managed to be an observer.

And now, one of my best friends, one of the people I admired and learnt from, whose company I all too infrequently enjoyed, and who happens to be one of the intrinsically nicest people I have ever known, has died.

I’m still an observer though, compared to David’s wife, Nika. God knows how she must be feeling now. I was delighted to meet her with David at an Extinction Rebellion meeting in 2018, I enjoyed having dinner and chatting with them. I saw how much happier David was with her in his life, and how happy they were together. I thought they were set for a long life of happiness together. And now he is gone, and she is on her own.

They were married only recently, but they met a very long time ago: I’ve probably got parts of the story wrong, but they were neighbours in New York, and there was attraction then but Nika was married. That marriage ended and Nika contacted David. The rest is their love story, which I saw and, as one does a great relationship, I envied.

They understood and appreciated each other as very few couples do, especially in the contrarian world. Max and Stacy, you’re another such couple. Ross and Megan, you too. There are very few double acts in this world: just those three really. And now we’ve lost one of them. Or, rather we and Nika have lost David.

David was special for many, many reasons.

The first I’ll mention is what I expect is the foundation of David’s appeal to Nika: his trusting innocence. There was a boyish openness and lack of ego in David that made you trust him, because you could.

He was, at the same time, extremely intelligent and extremely funny. He had a nervy aspect, very befitting of someone raised in New York. But he was fundamentally funny, and looked on the world with a sense of bemusement, and all the while, incisive insight. He was intrinsically an anthropologist, in that he was capable of living amongst people and seeing their customs more clearly than they could themselves, while all the while celebrating those aspects, the good and the bad, because they were his people as well.

There was a selflessness to David too. There wasn’t an ounce of David’s body that was in it for David’s benefit alone. Well, he enjoyed his pleasures, but they could never be had at the expense of another person. That made him someone you could trust with your life.

On top of that, he was an excellent if sometimes rambling speaker, whose charisma attracted support which was worth giving. David, I believe, came up with the slogan “We’re the 99%”. David, I believe, developed Occupy Wall Street’s voting system, which was a very powerful form of democracy that still respected the rights of the minority. He was a true leader in large part because he didn’t want to be.

He was also an excellent historian of money and debt. If you haven’t read Debt: the first 5000 Years, buy a copy and do so. It’s such a pity that David won’t be here to chronicle the start of its next 5000 Years.

That’s the other thing: the suddenness. I knew David wasn’t feeling well—I’d exchanged a few messages with Nika where David’s health came up. Maybe it was Covid—I still don’t know. I won’t speculate. 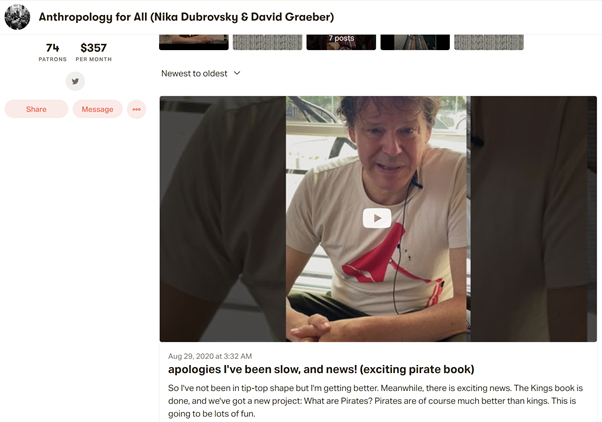 But it is so bloody awful to lose such a brilliant, lovely, funny, warm human being. It’s the unkindest cut of all that 2020 has managed to deliver.

Now we know why we speak of 20:20 vision, and 20:20 hindsight. We thought it was an ophthalmologist’s crazy numbering system. In fact, it was a warning from a time traveller.