Yves here. The idea of Medicare for All as an emergency program (which would hopefully become normalized) via executive order is wonderfully appealing. But I thought all spending had to be approved by Congress…while the Trump eviction freeze does not increase Federal outlays, but simply imposes costs on landlords.

Even assuming there was a way to square that circle, the executive order would make it a temporary program…and I wonder about the administrative ramifications. A lot of doctors don’t take Medicare. Could they be required to as a Covid emergency measure? And what about the operations side? Doctors who “don’t take Medicare” presumably aren’t set up administratively to do so. What would it take on the medical establishment end to process those claims? And does the government have the operational capacity to process greater volumes?

This is before getting to the horrorshow of all those Medicare Parts B and beyond….But it doesn’t have to be well thought out to be a hugely appealing campaign promise. 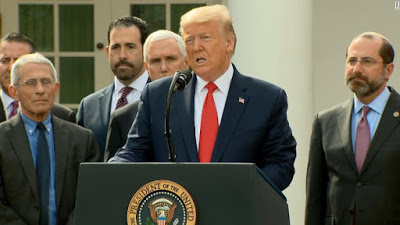 On September 1, the Trump administration announced a nationwide moratorium on evictions to last until December 31, a full four months. The reason for the moratorium, according to a White House spokesman, was to make sure that people “struggling to pay rent due to the coronavirus will not have to worry about being evicted and risk the further spreading of, or exposure to, the disease.”

The moratorium applies only to people “who would otherwise be eligible for federal stimulus funds in the previous CARES Act, which went only to people with certain tax income levels and citizenship status.” The ban also requires that renters “self-certify” to become eligible. As Politico put it:

“The new ban covers tenants who certify that they have lost “substantial” income; that they expect to make no more than $99,000 in 2020 or received a stimulus check; and that they are making their “best efforts” to pay as much of their rent as they can. Tenants must also certify that an eviction would likely make them homeless or push them to double up with others in close quarters.”

It should be noted that the ban does not cancel rental obligations; it just delays payment. Also, as the order itself states, “Nothing in this Order precludes the charging or collecting of fees, penalties, or interest as a result of the failure to pay rent or other housing payment on a timely basis, under the terms of any applicable contract.”

As a solution, it’s better than nothing, but it only defers the pain.

About Half of All Landlords Will Suffer Too

The order provides no funds for relief to landlords. For the many landlords who are, in fact, millionaires, billionaire, and large, well-funded corporations and venture capital firms, this may look to many like just desserts. For the other half of the landlord population, however, especially the minority who own just one or two rental properties, this could spell financial disaster as great as the disaster their tenants are facing.

It’s hard to get figures for the breakdown of the wealth among landlords, but the industry-friendly article in Politico quoted above implies that the wealthy landlord group, while “a fraction of the market,” is in fact almost half — which technically qualify as “a fraction,” but a sizable one. The article states that “a little over half the rental housing in the country” consists of small properties with between one and four units per building — which means that a little under half of the market consists of large buildings.

The Politico article, clearly industry-sourced, then focuses on the suffering of a percentage of the percentage of small owners, ignoring completely the mega-owners, just as it ignores the suffering of the renters themselves, except to emphasize how many of them pose an economic danger to landlords. Still, small owners are left in the cold by the administration’s ban, and their distress will be real.

What Makes This Declaration Legal?

The authority for this action comes from the Centers for Disease Control (CDC) and the Surgeon General, who reports to the Department of Health and Human Services (HHS) — not from the Housing or the Treasury departments — and it’s based on the stated need to prevent the spread of disease in a crisis.

The Surgeon General, with the approval of the Secretary, is authorized to make and enforce such regulations as in his judgment are necessary to prevent the introduction, transmission, or spread of communicable diseases from foreign countries into the States or possessions, or from one State or possession into any other State or possession. For purposes of carrying out and enforcing such regulations, the Surgeon General may provide for such inspection, fumigation, disinfection, sanitation, pest extermination, destruction of animals or articles found to be so infected or contaminated as to be sources of dangerous infection to human beings, and other measures, as in his judgment may be necessary.

This declaration and the unusual legal authority on which it is based has many important ramifications. For one, it opens the door for Medicare for All by executive order.

We can discuss Trump’s action in several ways, each of which could become an essay on its own.

But in doing so, he’s just kicked the can down the road until after the election, solving none of the underlying problems in doing so. Renters will still owe rent that they can’t pay from income they don’t have, and those small landlords with mortgages are still on the hook to their own creditors regardless of having been forced to keep non-paying tenants.

2. A much more reasonable action would be the obvious, socialist one — let government write checks to landlords on behalf of renters, then work out repayment (or debt forgiveness) schemes later.

Or better, let government cover the payrolls of businesses that are suffering or going under, then forgive what’s owed afterward. After all, the root cause of the economic downturn is lost payrolls. As for repayment, this is an emergency after all, and FEMA doesn’t send bills to those whose hardship it relieves. The money spent is just the cost of the crisis.

But that’s a socialist, Sanders-like solution, and neither party wants any part of it. Thus the hesitation to act, the labyrinthine schemes, and the means-tested requirements and restrictions.

3. This action places Trump to the left of national Democrats on Covid relief. If he’s smart (he’s not), he’ll stay to their left and offer all sorts of “socialist” (Sanders-like) solutions to the economic crisis — see below for a major one. After all, Trump ran the 2016 election on a Sanders-like platform — against NAFTA, against free trade, for infrastructure-as-stimulus, against the forever war, and so on.

If he’s smart, he’ll restart that campaign. But he’s not smart.

4. The biggest thing Trump could do — and it would be a game-changer — is use the authority he’s already used under “Title 42 U.S. Code § 1395rr–1 – Medicare coverage for individuals exposed to environmental health hazards” to provide Medicare coverage for everyone in the United States “exposed to environmental health hazards.” Which in these Covid times … is everyone.

The applicable section of Title 42 allows for a “Pilot program for care of certain individuals residing in emergency declaration areas.” That care can be defined as “access to all of Medicare”:

The Secretary shall establish a pilot program in accordance with this subsection to provide innovative approaches to furnishing comprehensive, coordinated, and cost-effective care under this subchapter to individuals described in paragraph (2)(A).

The Secretary of HHS could even use this law to create “optional pilot programs” to supplement regular (and in many ways, inefficient) Medicare:

The Secretary may establish a separate pilot program, in accordance with this subsection, with respect to each geographic area subject to an emergency declaration (other than the declaration of June 17, 2009), in order to furnish such comprehensive, coordinated and cost-effective care to individuals described in subparagraph (2)(B) who reside in each such area.

For this to work, an emergency declaration must have been declared, which it has.

(A) In general An individual described in this paragraph is any individual who—
(i) is diagnosed with 1 or more conditions described in subparagraph (B);
(ii) as demonstrated in such manner as the Secretary determines appropriate, has been present for an aggregate total of 6 months in the geographic area subject to an emergency declaration specified in subsection (b)(2)(A)…”

While subsection (3)(B) applies to individuals with named diseases — asbestosis, mesothelioma, and the like — subsection (3)(C) allows this law to apply to an individual who “is diagnosed with a medical condition caused by the exposure of the individual to a public health hazard to which an emergency declaration applies, based on such medical conditions, diagnostic standards, and other criteria as the Secretary specifies.

Trump could guarantee himself a second term if he applied this law in this way, to give the nation Medicare For All under executive order.

5. Finally, while I think it unlikely that Trump would take this avenue to gain an electoral victory, I nonetheless hope he does, for these three reasons.

First, it would give Medicare for All … to all. That would be a huge progressive win in and of by itself, a win we’re not going to get under a Biden presidency without monster effort, and win we’ve been unable to achieve since the Truman administration.

Second, it would force Biden to match him or admit defeat on ideological grounds. That’s a problem I would love for Biden to face.

An added benefit: Trump’s support of Medicare for All takes all the burden of moving Biden left off of progressives and places it onto the Republicans, who would be playing an Ace if Biden doesn’t play an Ace of his own. Let Republicans do the heavy threatening. This frees progressives to happily and genuinely support a compliant Biden (for a change).

Trump wouldn’t have a chance if Biden did that, and Biden would be hailed by history as literally the savior of this generation. That’s a whole lot better than than the legacy he’s on track for now — being the not-Trump, slower-paced sinker of it.