This is Naked Capitalism fundraising week. 1762 donors have already invested in our efforts to combat corruption and predatory conduct, particularly in the financial realm. Please join us and participate via our donation page, which shows how to give via check, credit card, debit card, or PayPal. Read about why we’re doing this fundraiser, what we’ve accomplished in the last year, and our current goal, more original reporting.

Yves here. With so much drama on so many fronts, we’ve been relegating most climate change news to Links. We thought we should counter that with some overdue reporting on ice melt and sea level rises. 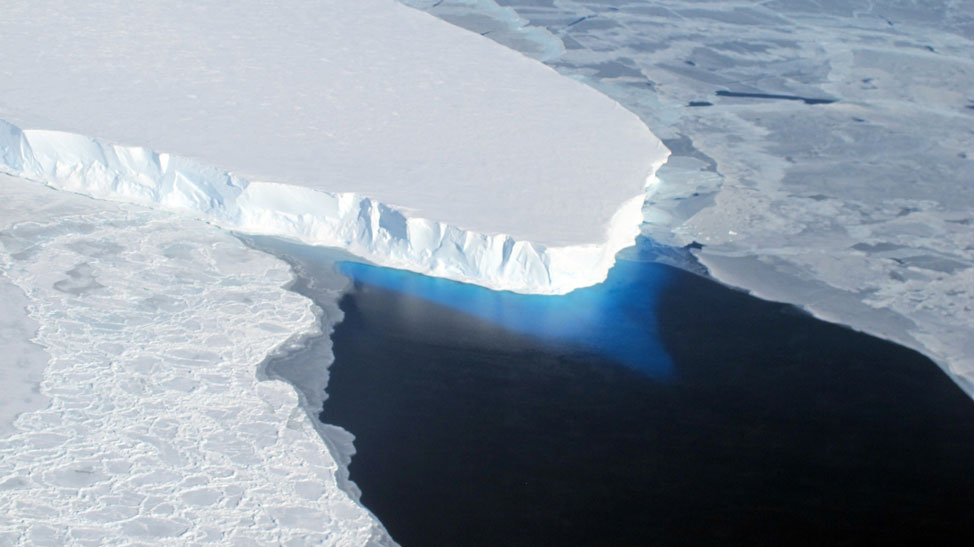 The calving front of Thwaites Ice Shelf looking at the ice below the water’s surface as seen from the NASA DC-8 on Oct. 16, 2012 (Photo credit: James Yungel, NASA).

Images from satellites high above the Earth have helped a research team put together a stark visual chronicle of decades of glacier disintegration in Antarctica. Meanwhile, a separate international research team has taken the opposite perspective – studying the ice from its underbelly. Both teams are documenting the stress on two glaciers in West Antarctica that so far have helped check a massive stream of melting ice responsible for about 5 percent of Earth’s rising sea levels.

Climate researchers have long monitored ice sheet dynamics in the Amundsen Sea, focusing specifically on the Thwaites and Pine Island glaciers. The two sit side by side on Antarctica’s western peninsula covering an area roughly the size of nine U.S. coastal states stretching from Maine to Maryland. The two glaciers alone store ice that could account for about 4 feet (1.2 meters) of global sea level rise. Their “seaboard” location may help bring increased public attention and interest to the West Antarctic Ice Sheet, which if it melted could raise seas by a catastrophic 11 feet (3.4 meters).

An international effort led by the British Antarctic Survey recently published two papers (Hogan et al. and Jordan et al.) showing the first detailed maps of the seafloor at the edge of the Thwaites Glacier. The team mapped deep submarine channels that have been funneling warm water to this vulnerable location. High-resolution imagery pinpoints the pathways that allow warm water to undermine the ice shelf. Lead author Kelly Hogan of the British Antarctic Survey says the findings will improve estimates of sea-level rise from Thwaites Glacier. “We can go ahead and make those calculations about how much warm water can get under the ice and melt it,” Hogan said.

The other researchers, led by Stef Lhermitte, found stark visual confirmation of glacier disintegration using decades of time-lapse satellite imagery. Their work sheds light on the accelerating feedback process, wherein the rapid loss of ice is opening the door to ever-increasing melting.

Snowfall on the inland portions of Antarctica feeds the Thwaites and Pine Island glaciers, which flow downhill and out into the Amundsen Sea. The glaciers extend beyond the coastline, and the base of the ice rests on the seafloor. In front of the grounded ice, a floating shelf of ice stretches out into the ocean. These marine ice sheets are particularly sensitive to changes in climate, and rapid changes in these vast glaciers are making this the world’s largest zone of uncertainty for projections of sea-level rise.

Floating ice shelves have long protected and stabilized the glaciers behind them, slowing the flow of ice into the sea. But when the protective ice shelf is lost, the stream of ice it had held in place becomes free to drain to the sea. Such changes have occurred in West Antarctica in the geologic past, unlocking enormous volumes of ice during periods of climatic warming.

Hogan’s team studied the warm, salty current called the Circumpolar Deep Water, which follows undersea channels directly to the front of the Thwaites Glacier. This process is “thought to be one of the major culprits for melting at Thwaites,” Hogan said in a recent radio interview. To compile this data, the team undertook a two-month journey aboard the Nathaniel B. Palmer, a 300-foot icebreaker specially equipped for scientific research.

The scientists found seafloor channels to be more than 2,600 feet (800 meters) deep, several hundred meters deeper than originally thought. As a result, the amount of warm water that can reach the ice front is also larger than previously believed, with more warm ocean waters able to erode the ice shelf from the bottom up.

Thus, the accelerated feedback process: First, the floating portion of the ice shelf thins, cracks, and breaks apart. Also, the “grounding line” where the ice rests on the sea floor retreats landward. Since the grounding line anchors the ice sheet, its retreat is like kicking the chair out from under a seated person. As the grounding line moves landward, the ice shelf is destabilized. Large slabs of ice can detach, or “calve” into the open sea. Warm ocean water gains access to new areas of ice, fueling more melting.

Ice Breakup Visible from Above

Another study released earlier in September shows the visible effects of a warming climate on the Thwaites and Pine Island Glaciers, using time-lapse satellite imagery dating back to 1973. The images show the ice weakening, thinning, retreating, and breaking apart, evidence of a decline in the ice shelves that could possibly lead to wholesale collapse.

This series of images shows the ice front at Pine Island Glacier in a more or less stable position from 1973 to 2014, and then a startling retreat in 2015 through the present. Roughly 30% of the ice shelf disappeared over the past six years.

These time-lapse photos Movie S5 from Thwaites Glacier span a 20-year transition from an ice surface that was smooth and solid to one that became fractured and crevassed as it ripped apart.

In this video Movie S3 the ice shelf that had been holding Thwaites Glacier in place has been reduced to “melange,” a fluid mixture of ice fragments. These remnants of the formerly solid ice offer none of the buttressing effect of a solid ice shelf.

The research team documented other effects too: the glaciers and their ice shelves are thinning, and the speed of glacial outflow has increased. Both of these processes contribute directly to rising seas.

Concern over ‘Further Disintegration’ of Glaciers

The observed changes to these glaciers are worrisome enough, but the authors are especially troubled by signs that the decline is speeding up. Lhermitte and his co-authors posit that the types of damage they documented are signs that “these ice shelves are already preconditioned for further disintegration.”

The region may have passed a tipping point because damage to the ice paves the way for further breakup. For example, cracks in the ice surface cause structural damage that can trigger large-scale calving events. In turn, the calving causes further weakening when adjacent ice streams no longer connect to each other, making each one less stable.

Similarly, when warm water melts ice from below, the ice shelf loses contact with the seafloor that holds it in place. The detachment from “pinning points” can allow the ice to speed up, which then allows more cracks and troughs to form, exacerbating the instability.

Taken together, the research paints a picture of an accelerating decline of ice. Such feedbacks intensify the scale and pace of change, and are difficult to predict. Scientists have concluded that major ice loss in this region appears to be irreversible.

A set of visualizations called Mass loss in Antarctica documents the declining ice. On NASA’s Earth Observatory website, readers can drag a slider across images from 2001 and 2019 to watch the decline of Thwaites Glacier over time. Major calving events from the ice shelf at Pine Island Glacier are captured in a series of NASA images.

Projections of sea-level rise by research entities like the IPCC are often conservative, pinning hopes on a middle-of-the-road scale of consequences. But scientists note that more dire outcomes are possible, especially as amplifying feedback effects kick in. Climatologists have long viewed the West Antarctic Ice Sheet as a likely place for such an outlier event.

This current work helps clarify the exact processes leading to ice loss and documents the pace of change. The results, while unsettling, will also lead to better estimates of what’s in store for the world’s coastlines. Even if the news is bad, it’s far better to be forewarned than to be caught off guard.