One of our favorite headlines was about the HUD Secretary during the foreclosure crisis: Memo to Shaun Donovan: Your Nose is Getting So Long You Need to Get a Hacksaw. We’ve resisted the temptation to reprise it with CalPERS CEO Marcie Frost as the Pinocchio wannabe. But yet another incident of Frost’s casual lying shows it to fit.

Readers may recall that former CalPERS board member JJ Jelincic filed complaints with the Fair Political Practices Commission with respect to board member Theresa Taylor’s failure to report over $30,000 of income, as required under California law. From a July post:

As we’ll show, Taylor has made a cut-and-dried violation of California requirements for California officials to report all income and assets received from non-government sources in their jurisdiction. Specifically, Taylor hid at least $30,000 of income she received as Vice President/Secretary-Treasurer of SEIU 1000 from 2016 to 2018.

Taylor failed to disclose this income on the Fair Political Practices Commission’s Form 700, a disclosure of economic interests, which is a form sworn under penalty of perjury. Perjury is a felony in California.

The conflict of interest is real, since Taylor did not recuse herself over matters before the board that affected SEIU 1000 members.

Jelincic filed two complaints. The first, on June 20, was about Taylor’s failure to report the >$30,000 of income. He filed a second compliant about CalPERS apparently having taken 50 days to file Taylor’s amended Form 700 with the Fair Political Practices Commission (FPPC) when the required time for a filing officer to forward required documents to the FPPC is 5 days. The text of his second complaint is at the end of this post. Jelincic’s second complaint effectively said that either CalPERS filed the amendment impermissibly late or falsified the document by backdating when it received the amended form from Taylor.1

Bear in mind that the investigation of original complaint about the under-reporting of income has not been resolved. Given that Taylor admitted to her failure to report income by submitting an amended form, it’s reasonable to surmise that the FPCC is trying to determine what sort of sanction to deliver.

Mind you, the filing abuse at CalPERS that Jelincic flagged, though a real violation, is minor compared to Taylor’s sin of not reporting a significant amount of income.

Yet CalPERS CEO Marcie Frost is so desperate to scapegoat anyone rather than accept responsibility and perhaps even try to do an adequate job of managing that she denied being in charge of CalPERS and lied to the board about the FPCC’s action about Jelincic’s second complaint.

The first embedded document at the end of the post is the response by Lance Olson, outside counsel to CalPERS, on behalf of Frost and two CalPERS employees cited in the second Jelincic complaint, Chief Compliance Officer Marlene Timberlake D’Adamo and the apparent FPPC “filing officer,” Tifani Vincent.

This remarkable statement appears near the beginning of Olson’s missive, under the header “Background”. Notice this is the only defense offered for Frost’s inaction:

As the complaint notes, Respondent Marcie Frost is the Chief Executive Officer of CalPERS. As CEO Ms. Frost has no specific duties related to the filing of statements and reports required of CalPERS board members and employees pursuant to the Political Reform Act.

This is the second time in mere months that Frost has said directly or though her attorney that she’s repudiating duties she accepted in writing as the CEO. Recall that Frost had said earlier that she’s not in the compliance business when she denied responsibility for failing to act upon Chief Investment Officer Ben Meng’s conflict of interest with respect to a $1 billion Blackstone fund. As we wrote of Frost’s “Me? I just work here” response to her dereliction of duty with respect to Meng:

But the piece de resistance came in Pensions & Investments, when Frost flat out said she’s not doing the CEO job:

It is important to guard against the appearance of impropriety, Ms. Frost said. Currently, it is up to each investment staff member to ensure there are no conflict of interests between their personal investments and their job at CalPERS, she said.

CalPERS main role is education, Ms. Frost said, noting that each staff member has a “personal responsibility” to ensure they recuse themselves from participating in activities in which they have a conflict.

Frost should be fired for that statement. No financial institution can afford to have its top executive say that it’s not in the compliance business, that everyone is expected to know how to behave and allowed to operate willy-nilly

She is also clearly being insubordinate by refusing to perform her official duties. From the CalPERS Delegation Resolution for the Chief Executive Officer:

Despite her affirmation above, Frost has apparently forgotten that CalPERS has a compliance function, called Enterprise Compliance or ECOM in CalPERS-speak, although since she’s kept its staffing at a mere 21, versus, depending on how you count it, 79 or 81 for her PR department,2 it’s apparent what matters to her.

And Frost also appears to have forgotten that the top initiative of the compliance function that she lost track of was improving its oversight of conflict of interest rules: 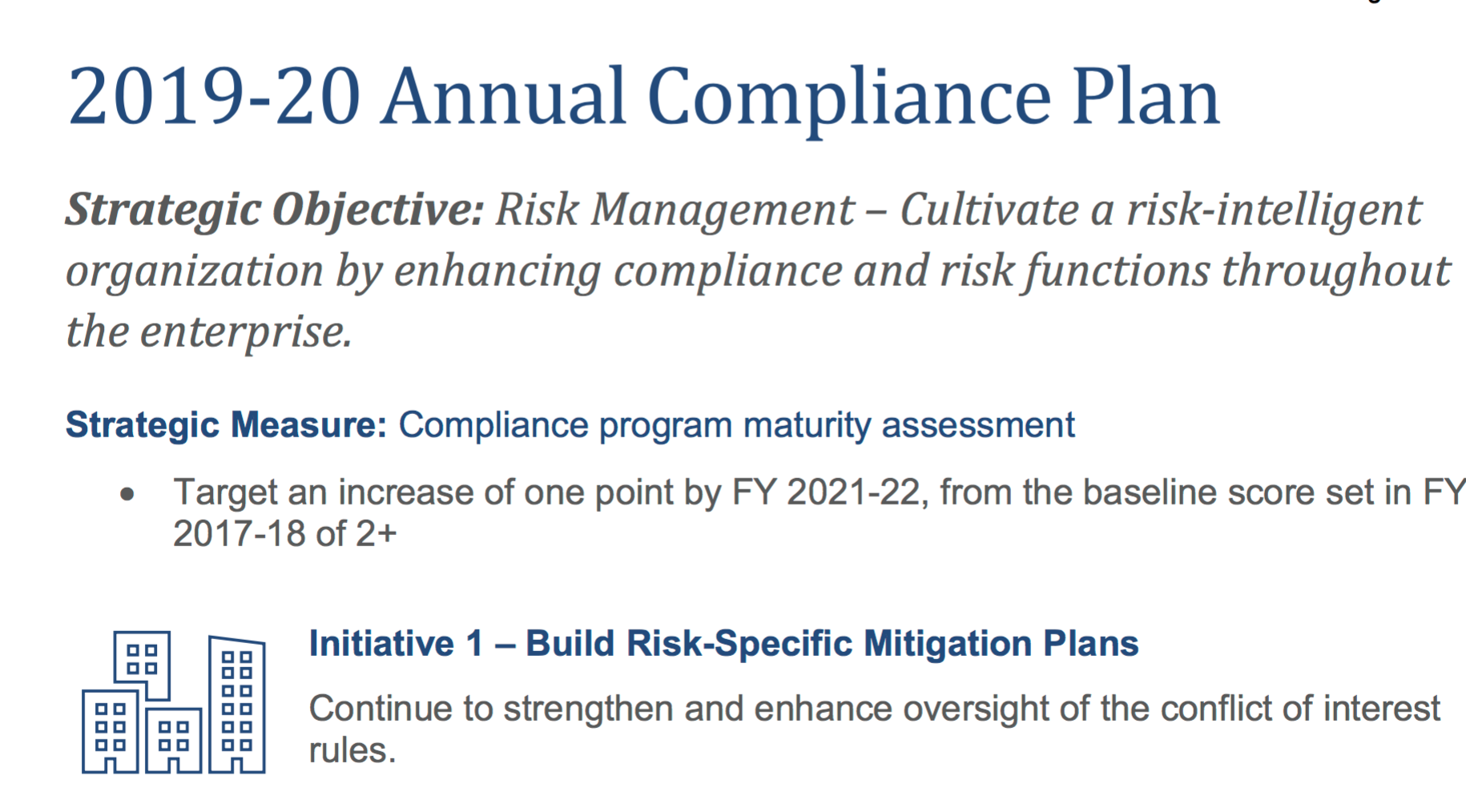 Back to the current post. The FPPC agreed with Jelincic, that CalPERS had violated its requirements, but gave CalPERS a break for its “Covid ate my schedule” excuse, and issued only the mildest sanction, a warning, as you can see in the second letter embedded at the end of this post.2

The FPPC also acknowledged that the law was unclear as to whether the requirement to forward Forms 700 filed by board members to the FPPC within five days of being filed with CalPERS applied to amendments.

However, the FPPC dinged CalPERS for falsifying dates:

The complaint alleged that your clients violated the filing officer duties provisions of the Act by failing to forward to the FPPC within 5 days amended SEIs filed by Board Member Theresa Taylor….

While Regulation 18115 is not clear if the 5-day requirement applies to amended SEIs [Statements of Economic Interests], your clients’ actions violated the Act by failing to correctly indicate the date CalPERS received the amendments filed by CalPERS Board Member Theresa Taylor.

The FPPC clearly included Frost in its warning. The FPCC letter went to Olson on behalf of Frost, Timberlake D’Adamo, and Vincent, and it refers to “clients” in the body, not once excluding Frost. That is because the FPPC held the Enterprise Compliance function, and not just particular officials, responsible, and by implication, recognizes that Frost is ultimately accountable. The key sentence:

So what did Frost do about having been issued a warning from the FPPC? She flat out lied to the board, hoping that her “nothing to see here” falsehood would keep them from reading the FPPC missive and seeing otherwise:

Mr. Jelincic filed an FPPC complaint regarding filing of Ms. Taylor’s amended Form 700. Attached are the relevant documents. The FPPC declined opening an investigation and issued the attached letter.

Frost is effectively accusing the FPPC of running a kangaroo court, of issuing judgments without looking at facts. Not only did the FPPC not decline to open an investigation, it assigned a case number, conducted an investigation, and issued a warning letter, which it stated also allows it to “conclude” the case.

Or perhaps, as one wag put it, “I guess they didn’t teach reading at The Evergreen State College as part of its BA/Masters program.”

Marcie Frost is the Chief Executive Officer of the CalPERS. According to her delegated authority she is responsible to conduct, approve and oversee the administration and management of all functions within CalPERS, including without limitation all actuarial, audit, financial, investment, and legal functions, with independence and in conformance with professional standards, and in conformance with the direction of the Board.

Marlene Timberlake D’Adamo is the CalPERS Chief Compliance Officer. According the the CalPERS website she is responsible for all aspects of the Enterprise Compliance Division.

Tifani Vincent has been identified by the Officer of the State Treasurer to be the CalPERS FPPC filing officer. Although I can find no other documentation of that.

On August 20, 2020 the amended Form 700s were filed with the FPPC. This is a 50-day delay, well beyond the maximum 5 days permitted by the regulations.

An alternative theory is that amended Form 700s were not in fact completed and filed with CalPERS on July 1, 2020 despite the Enterprise Compliance Division date stamp. If that is the case documents were falsified. This would appear to be an aiding and abetting violation (GC 83116.5)

2 If you read the letter by Olson and then the FPPC response, you can detect some annoyance at the FPPC having to expend energy to dismiss Olson’s ridiculous argument that the FPPC and not CalPERS is the “filing officer”.