Having an exciting night with the power cutting in and out due to Zeta isn’t conducive to concentrating. And was not conducive to searching either, since we eventually lost our Internet connection. So apologies for this post being thin. Nevertheless, let us turn to another solid Wall Street Journal article on Covid’s considerable damage to the economy.

Yesterday, we discussed a critically important issue that both Presidential candidates are pointedly ignoring: that once Trump eviction moratorium expires in January, unless Something Is Done, 30 to 40 million people are set to be thrown out of their dwellings. Some may be able to crash with relatives or live on friend’s couches, but a significant percentage will wind up homeless, a visible explosion in distress that the US will not have suffered since the Great Depression.

Today, the Journal probes another looming disaster stemming from the reluctance of either party to step up and spend enough, in this case, to salvage state and municipal budgets. Finger-pointing at the Republicans for their refusal, in the recent failed rescue talks, to include funding for state and local governments doesn’t properly apportion blame. A stimulus package, even if it denied additional funding to these bodies, would have still given them some help by boosting the incomes of citizens and businesses. That would have meant higher sales and income tax revenues than in the “no stimulus till at best March” mess we are in now.

Remember that state and local governments have already cut headcounts. That’s only going to continue as the budget black holes get larger. Lower employment doesn’t just mean reduced services; it’s another part of the deflationary downdraft, since the lost incomes and spending of those government workers intensifies the funding stress.

The ugly overview, from the Journal:

Nationwide, the U.S. state budget shortfall from 2020 through 2022 could amount to about $434 billion, according to data from Moody’s Analytics, the economic analysis arm of Moody’s Corp. The estimates assume no additional fiscal stimulus from Washington, further coronavirus-fueled restrictions on business and travel, and extra costs for Medicaid amid high unemployment.

That’s greater than the 2019 K-12 education budget for every state combined, or more than twice the amount spent that year on state roads and other transportation infrastructure, according to the National Association of State Budget Officers. 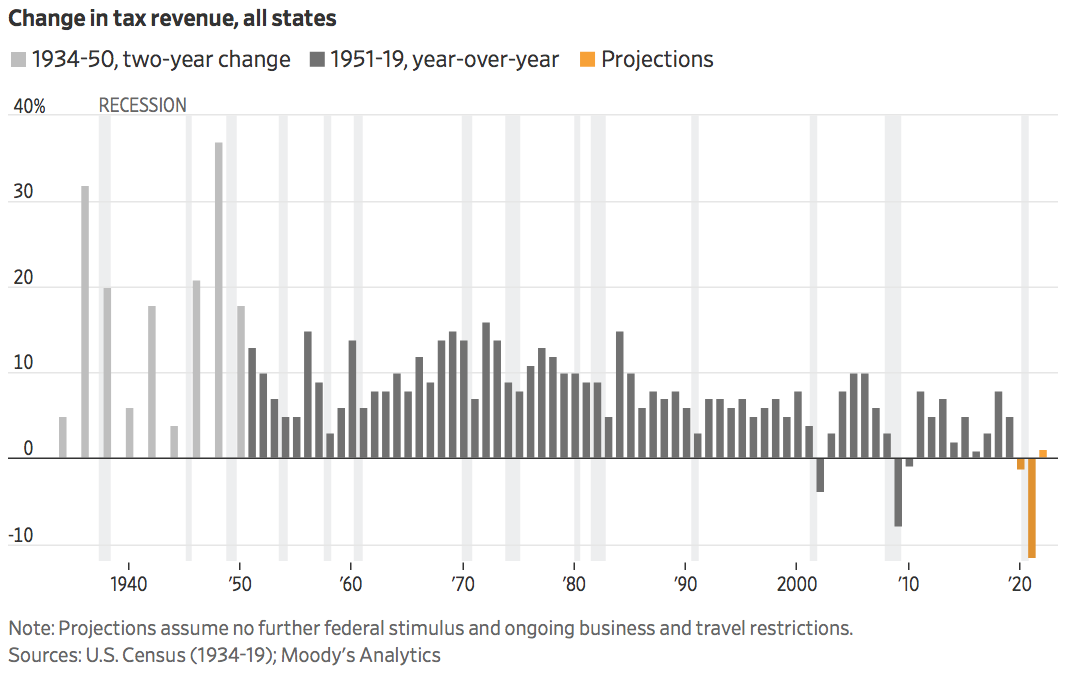 States have established “rainy day” funds so they can ride out revenue shortfalls, since most are not allowed to borrow for general budget needs. However, these reserves were never envisages as needing to contend with a Covid-level deluge. And on top of that, some states hadn’t fully replenished them after dipping into them after the financial crisis. Again from the Journal:

States are dependent on taxes for revenue—sales and income taxes make up more than 60% of the revenue states collect for general operating funds, according to the Urban Institute. Both types of taxes have been crushed by historic job losses and the steepest decline in consumer spending in six decades….

States that earn big chunks of their revenue from hard-hit industries are hurting. Americans are commuting and traveling far less, and oil prices have tumbled, hitting energy industries in Texas, Oklahoma and Alaska. Tourism has dropped in Florida, Nevada and Hawaii, and casino closures hurt Rhode Island, New York and Illinois.

Hawaii, for example, is expecting fewer than half the visitors it took in last year in 2020, and state officials forecast its general fund revenues won’t recover to pre-pandemic levels until its 2025 fiscal year….

A nationwide decline in combined state revenue has happened after only two events in 90 years: following the Sept. 11, 2001, attacks and in the aftermath of the 2008 financial crisis.

Annual state revenue fell following the Sept. 11 attacks and the bursting of the dot-com bubble around that time, but recovered within a year. During the recession that followed the 2008 crisis, state government revenue fell 9% over two years, according to Census Bureau data.

This time the shortfall could reach 13% over two years, according to Moody’s Analytics projections.

You can see how many states are in bad shape even after applying their full reserves to try to achieve 2019 revenue levels: 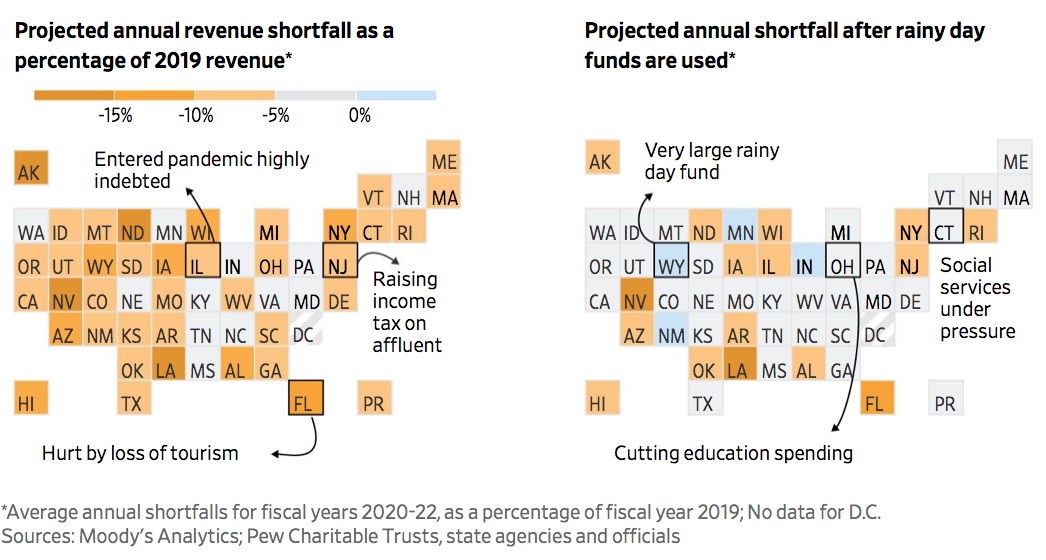 The Journal doesn’t say what Moody’s assumptions about Covid are, but an aside about “the recent uptick in Covid cases” suggests that the rating agency built in a winter increase but not much more. So lockdowns and/or Covid restrictions extending well into 2021 do not seem to be part of the baseline scenario. That means the downside could be considerably worse than Moody’s anticipates now.

Brookings comes to higher levels of cumulative budget shortfalls, admittedly by looking both at state and local governments. From last month:

As in other economic downturns, the pandemic has reduced state and local revenues, but this time is different. Declines in income tax revenues are likely to be smaller than projections based on historical experience because employment losses have been unusually concentrated on low-wage workers (who pay less income taxes than higher-wage workers), the stock market has held up so far (sustaining taxes on capital gains), and the federal government has increased and expanded unemployment insurance benefits and grants to business, which will shore up taxable income. On the other hand, declines in sales and other taxes and fees are larger than historical experience would suggest, because consumption has fallen so sharply and people are staying home—meaning that revenues from taxes and fees on hotels, tolls, airports, and motor fuel have plummeted.

Brookings doesn’t mention the impact of pension obligations on this picture. It matter because super low interest rates are punitive to long-term investors, and for some states, like Illinois and California, the obligations are backed by state guarantees (their only route for cutting commitments appears to be a Constitutional amendment, which needless to say is a high bar). And even if it might be possible to reduce existing pension obligations in other states, it would likely take a bankruptcy process, which has never been used by a state government. And that’s before you get to the impact on retirees of having income they relied upon cut. The Journal discusses Illinois, whose Supreme Court overturned legislation to cut pension obligations:

Illinois, with the worst finances of any state, has been banking on billions in federal funding. The state has a $230 billion pension liability after years of putting off payments, according to an estimate by Moody’s Investors Service, and faces an additional $8 billion backlog of unpaid bills.

Since the pandemic, Illinois’s total retirement and debt liabilities are on track to make up 45% of the state’s gross domestic product by June 2021, up from 35% in 2019, according to Moody’s Investors Service.

Illinois was one of only two borrowers to tap loans offered from the Federal Reserve as part of the aid packages. New York’s Metropolitan Transportation Authority was the other.

Illinois issued $1.2 billion in notes, but the funds are expensive, with an interest rate about 10 times the level typical in the market. The state has said it could borrow more. A spokeswoman for the state didn’t respond to requests for comment.

Connecticut has acute pension pain too, for different reasons:

Much of Connecticut’s liability stems from state efforts to shoulder the burden of its aging cities and towns. Almost a third of its total debt is local teacher pension and retiree health-benefit obligations, Moody’s Investors Service said, much of it from the 1990s, when officials skimped on retirement payments.

Two years ago, the state backstopped debt issued by its capital city of Hartford, which was warning it could declare bankruptcy.

The state’s hospitality and leisure jobs were down by about half at the height of the shutdowns, according to the Boston Fed, and were still down by about a quarter in August, despite a partial recovery. The state’s total unemployment rate was 9.5% in August.

The flurry of home buying as people fled New York City for Connecticut towns has had limited revenue benefits. The state’s tax collections from real-estate sales surged to a 10-year high of $47 million in August, according to the state revenue services department, but total collections from April through August remain below where they were the past two years.

While the chart above shows that Connecticut isn’t in terrible shape when you factor in their rainy day fund, the Journal points out that the state is facing high demand for social services, particularly due to its high drug abuse rate, and in-state providers that rely on state funding are worried about their 2020 budgets.

In other words, this is yet another place where Covid is already biting and is primed to get worse if infection rates continue to be high in 2021 and isn’t tamed that year.