Until the outbreak of the Covid-19 crisis, wage growth had remained sluggish in many advanced economies, while labour markets appear to have improved substantially. This column argues that real-time indicators based on qualitative survey data provided an overly optimistic picture of labour market conditions in the aftermath of the Great Recession. A new establishment-level measure in Sweden, that utilises survey respondents’ quantitative assessments of labour shortages, overcomes some of the shortcomings of purely qualitative data and indicates that labour markets have typically been much weaker than initially assumed during the recovery. As labour shortages are strongly correlated with wage growth at the establishment level, their lower level can help explain why wage growth in Sweden has been sluggish.

“… there is still a bit of a puzzle in that we’re hearing about labour shortages now all over the country in many, many different occupations in different geographies. … I would have expected, that wages would move up a little bit more.” –Jerome Powell, chairman of the Federal Reserve Board in the United States.

Jerome Powell’s puzzle has also been prominent in many other advanced economies, Sweden included (Sveriges Riksbank 2017). For example, in its flagship report released in December of 2018, the Swedish central bank estimated that the output gap in Sweden had been positive for three consecutive years. Over those same years, nominal wage growth had not budged and remained stable at around 2.5%.

Although estimates of unobserved variables such as ‘potentials’ or ‘natural rates’ are uncertain in real time (Orphanides and van Norden 2002), survey-based indicators pointed to continuously improving labour market conditions during the recovery from the Great Recession. This gave policymakers confidence in their assessment of high resource utilisation, tight labour markets, and an impending increase in inflation. But as I show in this column based on my recent paper (Frohm 2020), qualitative indicators can also give a biased picture of real-time labour market conditions. This was particularly the case in the period after the Great Recession.

An Establishment-Level Measure of Labour Shortages 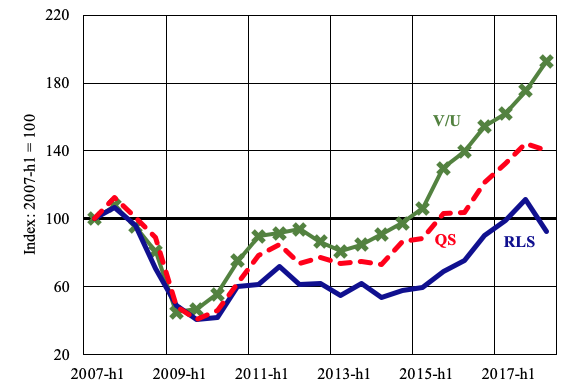 Source: Frohm (2020) and National Institute of Economic Research (NIER).
Notes: Index: 2007h1 = 100. QS (the dashed line) is simply the share of respondents that responded “Yes” to whether or not they experienced labour shortages in connection to recruitment over the past six months. V/U (the crossed line) is the vacancy-unemployment ratio measured as total number of vacancies as percent of the labour force, over unemployed persons as percent of the labour force in the age group 15-74 years retrieved from the Swedish National Institute of Economic Research. RLS (the solid line) is the average ratio of number of positions where respondents experienced labour shortages to total employment at the establishment.

These results hold irrespective if unweighted estimates are used (panel A) or those with sample weights (panel B). In a nutshell, this new evidence suggest that labour markets in Sweden would have to tighten considerably more to increase wage growth, in line with the theoretical analyses of Daly and Hobjin (2014) and Lindé and Trabandt (2019), as well as aggregate empirical analyses by Byrne and Zekaite (2018) and Nickel et al. (2019) for the euro area. 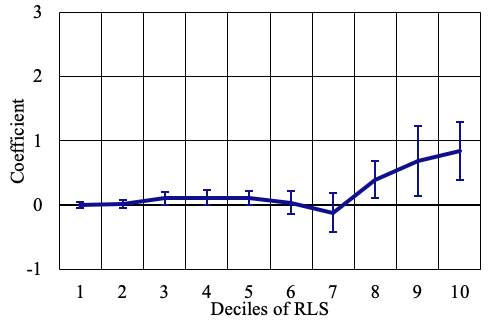 (B) With sample weights 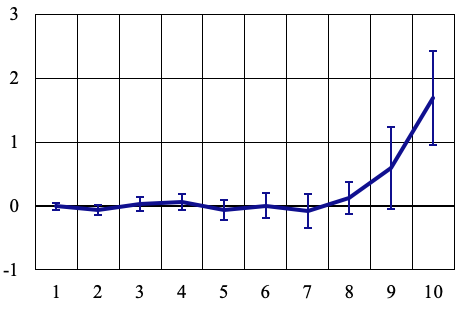 Some Caution in the Use of Qualitative Survey Indicators

Policymakers often use qualitative surveys as cross-checks for estimates of unobserved variables, like the output gap or unemployment gap. However, the evidence in this column suggests that while surveys reporting simply qualitative indicators (or labour market indicators reflecting changes in the numbers of unemployed, rather than those employed) may reasonably capture turning points, they may provide misleading signals as to the degree of labour market tightness – particularly in the aftermath of severe downturns.

This analysis is highly policy relevant. Several members of the Executive Board of the Swedish central bank highlighted record-level labour shortages as part of their assessment of the economic conditions at the December 2018 Monetary Policy Meeting, when the decision to begin tightening monetary policy was taken (Sveriges Riksbank 2018b). As my analysis shows, qualitative surveys of labour shortages likely underestimated the true degree of labour market slack in the recovery from the Great Recession and thus provided an overly strong signal for wage growth and inflation.

In the aftermath of the current Covid-19 crisis, there is a risk that respondents’ reference levels change again. By how much, and in what direction will likely be determined by the timing, length, and strength of the ensuing recovery.

Authors note: The opinions expressed in this column are the sole responsibility of the author and should not be interpreted as reflecting the views of Sveriges Riksbank. I am very grateful to Valerie Jarvis for thoughtful comments and suggestions.