Yves here. I would assume these retirement facility residents aren’t normally polled, so I wonder how they are included in voter models. But regardless, it’s inexcusable that they are being disenfranchised. Why isn’t the League of Women Voters insisting on 15 minutes of free air time at a Death Valley hour that seniors could watch, on a cheap cable channel like MeTV? And if they can’t get it donated, why isn’t some squillionaire like Mike Bloomberg willing to fund it? These problems are solvable, at least in big and medium sized cities, but no one cares to address it. 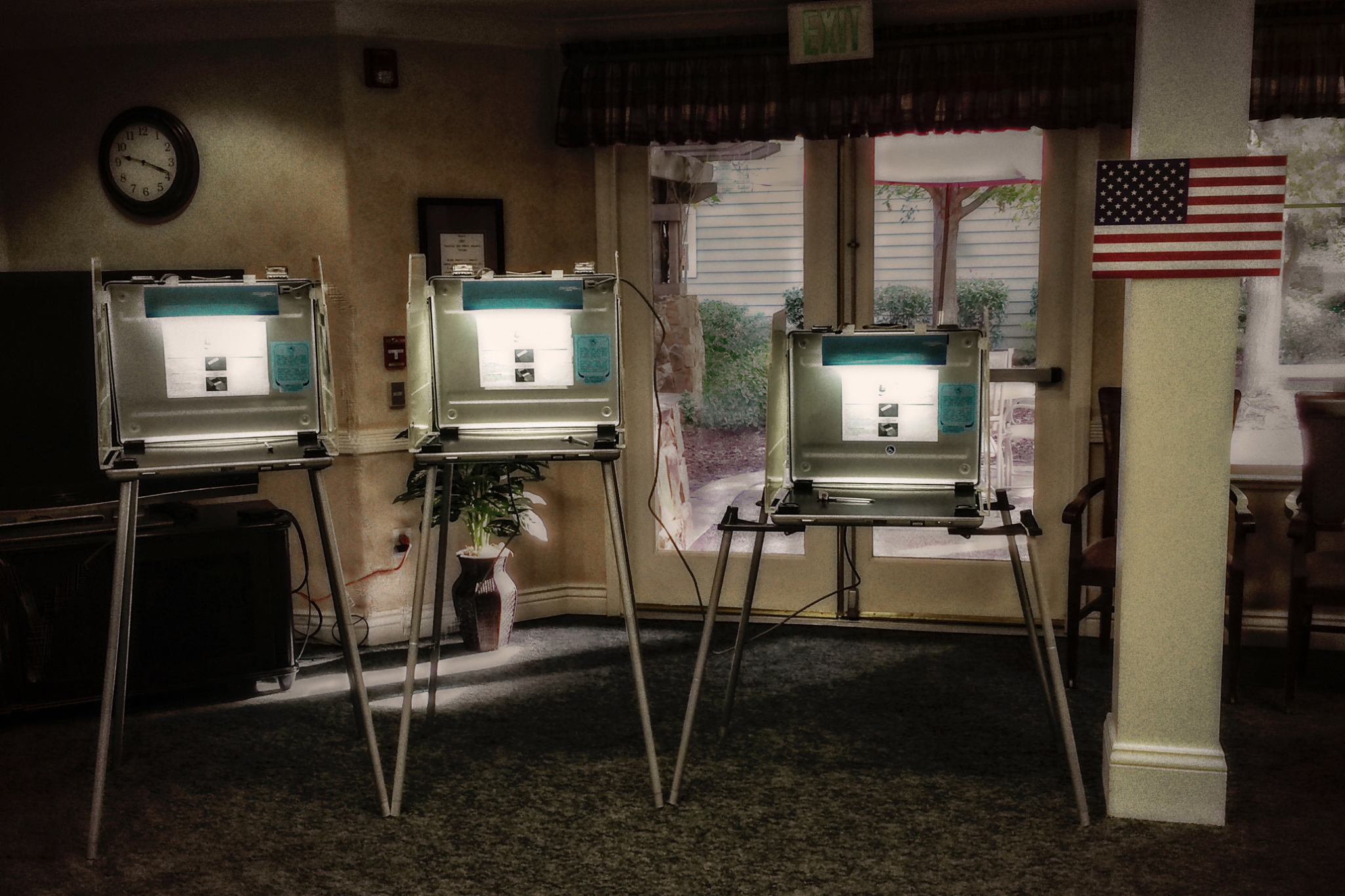 Voting booths in a polling place set up in a retirement home in Carmichael, California on Nov. 4, 2014. (Mardis Coers/Contributor via Getty Images)

The convergence of the coronavirus pandemic and election season has complicated this year’s voting for residents of nursing homes, assisted living facilities and other long-term care centers.

Many seniors who need help to get or fill out their ballots may be stymied by shifting rules about family visits. Voting procedures — whether in person or by mail — are under increased scrutiny, adding to the confusion. Facilities that used to host voting precincts likely won’t do so this year because of concerns about the spread of COVID-19.

Phillips, 75, who has rheumatoid arthritis, has voted by absentee ballot for years without problems. This year she is encouraging her fellow residents to vote by mail as well. She works with the facility’s activities staff, going resident by resident, to make sure folks are registered. As president of the resident council, Phillips has also raised the issue at community meetings.

Older Americans are a consistent voting bloc courted by both parties.

According to AARP, 71% of Americans 65 and older voted in the 2016 presidential election, compared with 46% of people 18-29. “For many older adults, it’s a point of pride for them that they’ve voted in every election since they were 18,” said Leza Coleman, the executive director of California’s Long-Term Care Ombudsman Association.

But hardly anyone has been allowed inside skilled nursing facilities since the start of the pandemic, except for staff members and the occasional state health official, or family members in certain circumstances. In California and beyond, facilities are beginning to open up in counties with low transmission rates, since federal rules changed in September to allow for more lenient visiting policies.

At the same time, outbreaks continue to plague some senior facilities, despite improved testing of staff and other safety measures. On Wednesday, Santa Cruz County health officials reported a major outbreak at the Watsonville Post-Acute Center, which has infected 46 residents, killing nine of them, and infecting 15 staff members.

California officials are pressing nursing homes and senior centers to give residents who want to vote the opportunity. The Department of Public Health on Oct. 5 sent a letter to all those facilities, explaining they have an obligation to inform and assist residents with voting, including what actions are permissible for staffers to undertake in helping voters. It also includes advice about maintaining a safe environment through the election by limiting nonessential visitors, properly using protective gear such as gloves and handling ballots as little as possible.

In years past, civic groups such as the League of Women Voters would stop by to give presentations on what’s on the ballot. Candidates for local office would hit nursing homes to make pitches. “In the context of a pandemic, we just can’t do it this year,” said Michelle Bishop, voter access and engagement manager with the National Disability Rights Network.

Before the pandemic, nursing homes and assisted living facilities also often served as polling places. Residents could easily access voting booths, often set up in a lobby or community room. That was especially important because nursing homes are likely to be accessible to people with mobility problems, Bishop said.

In California, the last day to register to vote online or by mail is Oct. 19, though voters can register in person up to and including Election Day. All registered voters will receive a ballot in the mail, and those postmarked by Nov. 3 will still be counted in California for 17 days after the election. Advocates say it’s important for newer residents at skilled nursing facilities to make sure they’ve registered at their new address or have plans to get their ballot delivered to them from their former homes.

Other states are also sending ballots to all registered voters by mail this year on various time frames. All states permit seniors or people who have trouble reaching polling stations to request an absentee ballot.

Once they have a ballot in hand, some older adults need help from family or staff at their facilities to complete it correctly and send it back to election officials. The federal directive to relax visiting rules could ease some of that pressure, but the situation varies by facility. For people whose relatives cannot help them, it may fall to staff members to set up calls and video chats between residents and their families, or provide the assistance to residents themselves.

Some states don’t allow nursing home staffers to help with ballots to avoid influencing votes. Even if they can assist, employees may be stretched too thin to help. In a year when nursing home staff members are spending an extra hour each day putting on protective gear, there isn’t always extra time to make sure every resident is registered and voting, said Dr. Karl Steinberg, chief medical officer for Mariner Health Central, a nursing home management company in California.

“There’s a perennial workforce shortage in nursing homes and it’s been exacerbated by this” pandemic, Steinberg said. “This year with all the chaos, there may be less staff time available to help people with voting.”

She asked the California Department of Public Health, which surveys skilled nursing facilities every six weeks about COVID-19 infection control, to add a question on how facilities were planning for elections. The department declined.

So she set up webinars with facility administrators and the Los Angeles County Registrar-Recorder/County Clerk to go over information on how to submit and track absentee ballots.

She has also urged state officials to provide a statewide plan that facilities could use as a blueprint. She wrote one herself that was emailed out by a trade group, the California Association of Health Facilities.

Still, California is in better shape than some other states, said Raúl Macías, a lawyer with the Democracy Program at the Brennan Center for Justice, a law and public policy institute. Elsewhere, residents may have to apply for an absentee ballot, and sometimes must provide a reason they can’t vote in person.

California also has the Voter Bill of Rights, which allows individuals to designate someone to help them fill out and drop off their ballot. In some states, such as North Carolina, assistance can come only from designated bipartisan voting assistance teams, which may be harder to recruit during a pandemic, Macías said.

No matter the state, state and county elections officials and facility administrators should draft voting plans, said Bishop, of the Disabilities Rights Network. It will help staff know the proper way to assist residents without influencing their votes, and residents know their voting rights.

If they can’t get access to ballots or need help, California residents can contact the state’s long-term care ombudsman program, which can investigate complaints, help them resolve the issue and take the problem to the Department of Public Health if it can’t be fixed.