Yves here. I hope you like historical pieces as much as I do, particularly since history is much debated. I’ve nevertheless been a bit reluctant to discuss fascism much, since the term has been too freely applied to Trump. Too many forget that he campaigned to the left of the Republican party in the primaries, then moved hard right after he won the nomination. One reader astutely pointed out that Trump isn’t an authoritarian, he’s just not that interested in doing the work to amass power. What he wants is attention.

The notion that fascism is an elite/bourgeois reaction against socialism is plausible, but I welcome reader input. Note that the article mentions in passing that the impact of the 1918 Spanish flu pandemic was one of the drivers of fears of socialist policies being implemented.

Right-wing populist movements often come to power by exploiting people’s anxieties and fears. Following WWI, fascists in Italy likely exploited the perceived threat of socialism to gain support among the elite and the middle classes. This column explores the link between the threat of socialism and Mussolini’s rise to power and finds a strong association between the Red Scare in Italy and the subsequent local support for the Fascist Party in the early 1920s. Local elites, especially large landowners, played an important role in boosting Fascist Party activity and support.

Right-wing populist movements are threatening Western democracies, from the US to France to Germany and the UK. What lies behind their ascendancy? When do such movements become successful at the polls? And when are they more likely to topple democratic institutions?

A common feature of many of these movements is their exploitation of the population’s anxieties and fears – for example, those generated by the 2008 financial crisis and the large inflows of immigrants. Right-wing populist governments have also taken advantage of panic generated by the COVID-19 pandemic to grab more power in Hungary, Poland, and Turkey, to name just a few examples.

These events have led many commentators to draw parallels between today’s right-wing movements and interwar fascism. Fascists in Italy and Nazis in Germany exploited fears and anxieties, too. Economic crises, the instability brought by WWI, and the strong nationalist and militarist feelings of many created an environment ideally suited to their demagoguery.

In this context, a famous theory articulated by several historians (e.g. Nolte 1965) links the appeal these parties had to the elite and the middle classes to the perceived threat of socialism following WWI. Similarly, several right-wing military dictatorships in Latin America, as well as in Turkey and Indonesia, came to power using the threat of socialism as an excuse.

What can we learn from the interwar experience about the character and the dangers posed by the new resurgence of right-wing populism? To shed light on this question, in recent work (Acemoglu et al. 2020), we revisit the rise of Italian fascism, focusing on the link between the threat of socialism and Mussolini’s movement in the 1920s.

Although several works emphasise the ‘Red Scare’ as an important contributor to the fascists’ rise,1 there has not been a systematic empirical investigation of this connection and its role in the Fascist Party’s takeover of government.

We use several newly collected datasets to explore the link between the perceived threat of socialism following WWI and the subsequent rise of fascism in Italy. Our main result is a strong association between the Red Scare in Italy, measured by the vote share of the Socialist Party in the first post-war election in 1919, and the subsequent local support for the Fascist Party in the early 1920s.

Specifically, we use three measures of support for fascists: the vote share of the Fascist Party in the 1924 elections, the presence of local branches of the party by the end of 1921, and fascist violence. All three of these measures show a tight connection between the Socialist Party’s municipal vote share for the 1919 election and subsequent support for the Fascist movement. 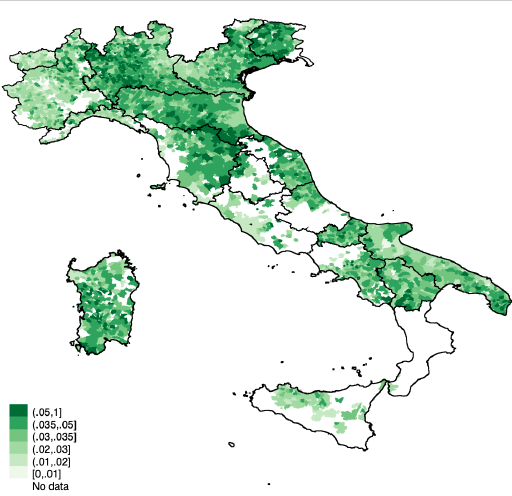 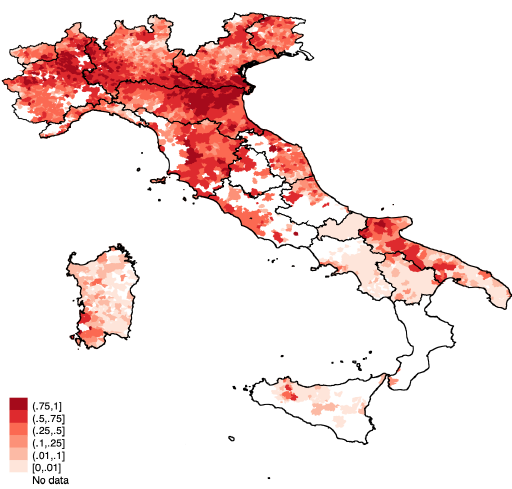 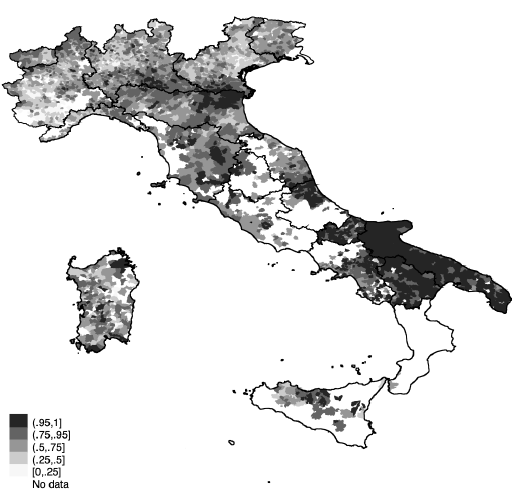 The correlation between the Socialist vote share in 1919 and subsequent Fascist support is likely to be affected by several other factors. To establish a causal link between the Red Scare and the rise of Italian fascism, we develop a new source of variation in support for the Socialists Party based on casualties from WWI in the local area.

WWI created huge hardships and disillusionment in Italy, both because of the army’s failures in the battlefield and its casualties and also because of a sense that, despite being on the winning side, Italy did not benefit from the war.

At the start of the 20th century, the Italian Socialist Party was one of the strongest in Europe. Because it had opposed Italy’s entry into WWI, the anti-war sentiment created a groundswell of support for the party. The Socialists emerged as the largest party in the 1919 election, capturing 32.3% of the national vote.

We use detailed data on war casualties to measure the extent of local hardship generated by WWI. We first show that foot-soldier casualties in the municipality are unrelated to a battery of the area’s pre-war economic, social, and political characteristics, including pre-war support for Socialist or Nationalist parties. In contrast to this, there is a very strong association between casualties and the Socialist Party vote share in the 1919 elections, regardless of various historical and contemporaneous controls.

However, by that time, the Socialist Party had started changing its character, embracing a Soviet-influenced hard-line agenda. During its 1918 Congress, the revolutionary wing of the Socialists took control of the party, drafting the programme centred on the mission to “to do as in Russia” (Tasca 1938). A year later, the party joined Communist International, stipulating that “The violent conquest of political power on behalf of the workers will signify the passing of power from the bourgeois class to the proletarian class, thus establishing […] the dictatorship of all of the proletariat” (Payne 1996: 89).

The two years following the election witnessed a further intensification of Socialist mobilisation. Strikes and riots became more widespread, reaching their pinnacle in September 1920 when workers occupied factories all over the country in a move that could have led to a socialist revolution in Italy.

These events generated palpable fear and anxiety among landowners and some elites, as well as among many middle-class Italians in cities and the countryside. Many elites came to view traditional centre-right parties as ineffective in stopping socialism and started to turn to Fascists. As Lyttleton (2003: 70) put it, “The expansion of Fascism in the rural areas was stimulated and directed by the reaction of the farmers and landowners against the peasant leagues of both Socialists and Catholics.”

Consistent with these assessments, our empirical results suggest a strong connection between the Red Scare, proxied by the increase in the 1919 Socialist vote share driven by casualties, and our three measures of fascist support, as illustrated in Figure 2. Our estimates suggest that as much as 15% of the increase in the Fascist Party vote share from 1919 to 1924 may have been due to the support of conservative and moderate voters in the face of the perceived Red Scare. Figure 2 (middle and bottom panels) shows that the effects on fascist violence and the likelihood of having a local Fascist Party branch in the area are similarly large. 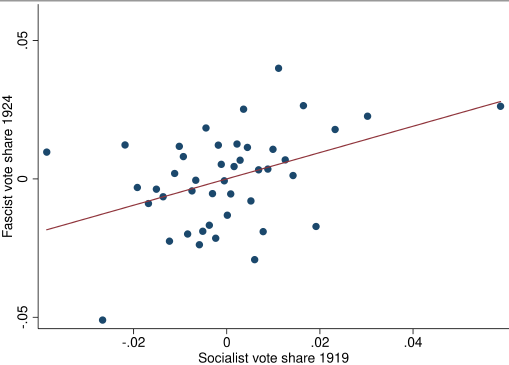 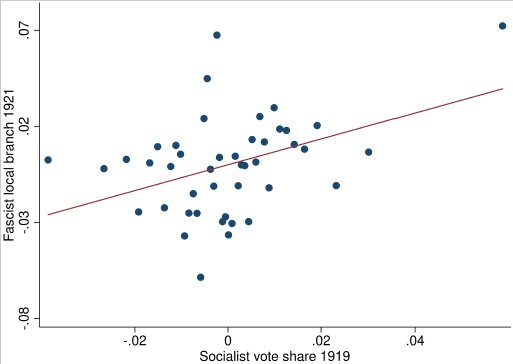 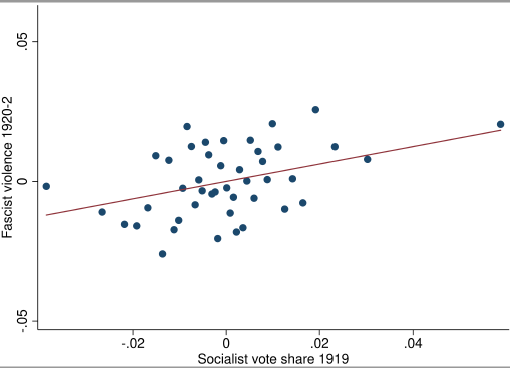 What Explains the Surge of Fascism?

We show that the Fascist Party votes did not come from the Socialists’ core support; instead, it was the voters who used to back centre-right parties that started voting for fascists in 1924. Greater nationalist sentiment had little to do with the rise of fascist support: WWI veterans do not appear to have supported the Fascist Party. Neither do we see greater nationalist feeling, as proxied by support for other nationalist parties or likelihood of building war memorials, in areas suffering greater casualties.

Rather, in line with the historical evidence, local-elite support appears to have been important in coordinating centre-right support under the fascist umbrella. We find much larger effects (including donations to the fascist cause from rich Italians) in areas where there are greater increases in the Socialist vote share in 1919 together with landowner associations or a greater number of local elites.

If the effects of war casualties and hardship are working through the perceived threat of socialism, then we may also expect other shocks that intensify left-wing support to have similar consequences. We show that this is the case. Both negative rainfall shocks and greater mortality from the Spanish flu pandemic also appear to have increased support for the Socialist Party during this era, and this increased support for the Socialist Party led to greater local Fascist Party activity later (even if our results here are less precise than those that are driven by war casualties).

Did the rule of the Fascist Party have a longer-term impact? There is no consensus answer to this question. The fascist takeover of power was an epochal event, which could have altered Italy’s subsequent economic or political trajectory. Yet, given its abrupt collapse in 1943, many historians have doubted its long-term consequences. Our paper also explores this question using the source of variation coming from casualties and new data sources.

First, we show that in areas where there was greater local Fascist Party support, more Jews were deported between 1943 and 1945. Thus, even though the support of Italians to Nazi atrocities have been often downplayed, our evidence suggests that Italian fascism led to local collaboration with the Nazis.

Second, we document that in the post-WWII elections, local Fascist Party support in the 1920s is associated with the much worse performance of centre-right parties. This may have been because their alliance and complicity with the Fascists in the 1920s delegitimised the centre-right establishment.

The rise of Mussolini to power was a turning point in world history. Together with Nazi Germany, it pushed Europe into unparalleled atrocities and human suffering. In our paper, we examine what paved the way to the Fascist Party’s electoral success and show that the perceived threat of socialism was an important contributor to the rise of Italian fascism. This was largely because landowners, the industrial rich, and many middle-class people turned to the Fascists amid growing support for the Socialist Party and industrial and rural mobilisation.

What are the lessons for today? On the one hand, if the interwar nationalism, militarism, and the veritable threat of socialist revolution were critical for the mass appeal (and violence and murderous activities) of extreme right-wing parties, then we may have less to fear that today’s right-wing populism will turn into a version of militant fascism. On the other hand, our results can also be read as a warning that we should watch out for heightening fears and anxieties rooted in economic instability, large immigrant flows or nationalism fuelled by international tensions, lest these start simultaneously radicalising right-wing populists and broadening their appeal among the population.