The Spanish Crown had a monopoly on the trade route between Manila and Mexico for more than 250 years. The ships that sailed this route were “the richest ships in all the oceans”, but much of the wealth sank at sea and remain undiscovered. This column uses a newly constructed dataset of all of the ships that travelled the route to show how monopoly rents that allowed widespread bribe-taking would have led to overloading and late ship departure, thereby increasing the probability of shipwreck. Not only were late and overloaded ships more likely to experience shipwrecks or to return to port, but the effect is stronger for galleons carrying more valuable, higher-rent cargo. This sheds new light on the costs of rent-seeking in European colonial empires.

In 2011 underwater archaeologists discovered the remains of the San José, a galleon sunk near Lubang Island, Philippines, in July 1694. It was one of 788 galleons that sailed between Manila and Acapulco, Mexico, between 1565 and 1815 as part of the Manila Galleon trade. The San José was laden with a huge amount of silks and spices, over 197,000 works of Chinese and Japanese porcelain, 47 chests full of objects of worked gold, and hundreds of other chests containing precious stones and objects, the total value of which was recorded as 7,694,742 pesos or more than $500 million in today’s money.

What does the sinking of the San José tell us about the costs of colonial trading regimes and the costs of corruption or rent-seeking more generally? This is a question that goes back to Adam Smith (1776).

From Tullock (1967) and Krueger (1974), we understand that the overall welfare costs of corruption can exceed the gains to the beneficiaries; from Shleifer and Vishny (1993), we know that the industrial structure of rent-seeking matters. We also have rigorous empirical studies of the costs of corruption in modern settings ranging from Indonesia (Olken and Barron 2009) and India (Niehaus and Sukhtankar 2013) to sub-Saharan Africa (Reinikka and Svensson 2004). But little empirical work has been done on colonial trading regimes.

In a recent paper (Arteaga et al. 2020), we examine the costs of corruption in the context of the Manila Galleon trade. The Manila Galleon trade was the longest, most profitable, and most celebrated colonial-era trade route. Importantly, the galleon trade was a government monopoly. The Spanish Crown owned the ships and restricted the number of voyages to one per year between Mexico and Manila; it also restricted the number of ships that could sail as part of each voyage. These restrictions made space on each galleon extremely valuable.

There was tremendous demand in Mexico and Spain for East Asian silks, textiles, porcelain, and lacquerware. Merchants from mainland Asia would arrive in Manila in May, bringing with them these highly valued goods, which they exchanged with Manila-based merchants for silver. These Manila merchants would then seek to load their cargo on galleons bound for Mexico. Space on each was rationed; officially, only individuals with tickets (boleta) were allowed to load their cargo. In practice, however, corruption was widespread, and merchants could bribe ship captains to carry additional cargo.

Figure 1 The route of the Manila Galleons 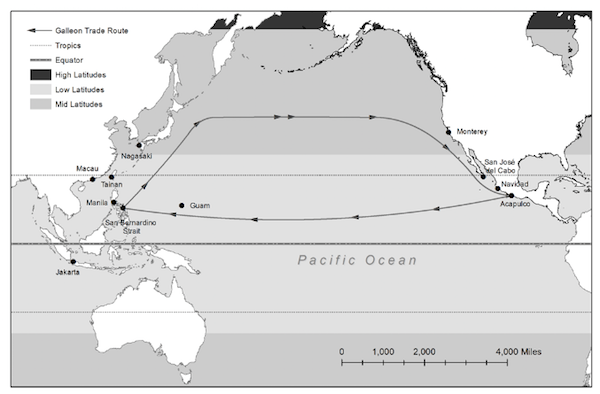 We formally model this process: traders in Manila, who want to sell merchandise in Acapulco, bribe galleon officials in exchange for cargo space. It takes time to load the cargo, but if the ship leaves too late it will run into perilous waters during the monsoon season.

The ship’s captain extracts the maximum amount of bribes. The logic behind this result is simple: as many merchants are vying for an allocation of the total space on the galleon, ship officials can extract maximum bribes by pitting each merchant against another to bid the bribe up to the cargo’s value.

Additionally, when the cargo value is very high, officials are induced to accept more cargo, even beyond the legal limit, and to delay departure past the deadline to load more cargo. That is, they would be willing to accept a larger probability of shipwreck as long as the marginal value of each cargo is greater than the increase in the probability of shipwreck. With more valuable cargo, merchants are more able to compensate officials for the expected cost of a shipwreck.

This model predicts that ships that depart late are more likely to be overloaded. We document this relationship empirically using a newly created dataset containing the universe of all ships that sailed between Manila and Mexico between 1565 and 1815.

We begin by establishing a robust relationship between sailing past the deadline from Manila and the probability of shipwreck (Figure 1). This relationship is not explained by storms or typhoons or other factors such as the experience of captains, and the age or type of ship. As a placebo, we show that there is no such relationship for the reverse voyage between Acapulco and Manila – there was no incentive to overload those ships as they mostly carried silver as payment for the traded goods.

Figure 2 Relationship between departure data and a failed voyage, controlling for temperature, typhoons, and captain experience 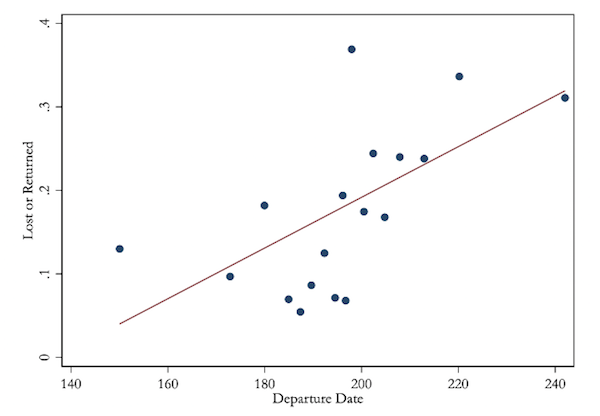 Next, we rule out alternative factors that historians have linked to late departures including the arrival date of the ship from Mexico, the threat of pirates and ships of enemy powers, and the volume of merchants arriving from China. We find that none of these affects the positive relationship between a late departure and a failed voyage.

Finally, we take two additional predictions of the model to the data. First, the model predicts that ships with a smaller capacity are more likely to be severely overloaded when they sail late. Consistent with this, Figure 3 shows that the relationship between a late departure and a failed voyage was greater for smaller ships. 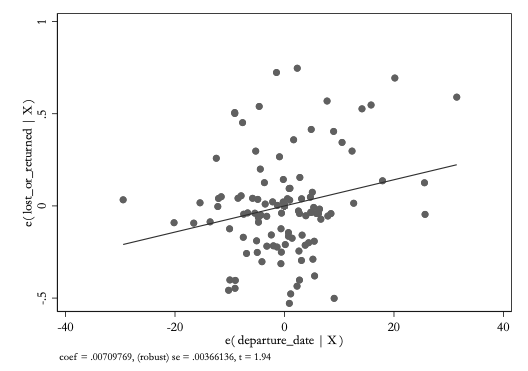 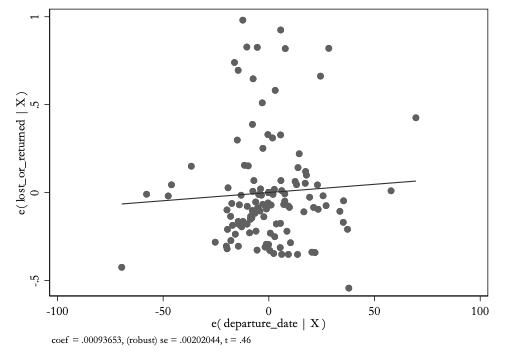 In addition, when the value of the cargo is higher, we would expect late ships to be more overloaded as the bribes that merchants would be willing to pay would be higher.

To test this, we employ several proxies for the value of the cargo. First, we know that if a voyage did not take place in a given year for whatever reason, then in the following year there would be a lot of pent up demand for Asian products in Mexico and Spain. Consistent with this reasoning, we find evidence that the relationship between late departures and failed voyages was greater following a failed voyage.

Together, these results provide additional evidence that is consistent with the mechanism outlined in our model. Ships in the Manila Galleon trade were more likely to be shipwrecked or to return to port because they were late and overloaded; in short, they were shipwrecked by rents.

This study demonstrates how monopoly regulations can have unanticipated negative consequences in the form of shipwrecks. While this historical setting is unique, the lessons from rent-seeking in the Manila Galleon trade can be generalised. The mechanisms responsible for shipwrecks in the Galleon trade are likely operative in other settings. For instance, cargo limits are often not observed on smaller flights – a problem that is particularly acute in developing countries – and this has been anecdotally linked to airline crashes.