Readers, I’m going to skip the Bird Song in favor of another sort of song:

I know it’s ridiculous — the Anglican Church, traditional architecture, “processing” as a verb, “all in white shall be around us,” and anyhow this holiday is really the solstice or Saturnalia — but the beauty of “Once in Royal David’s City” always makes my eyes sting, with tears. I search for it, well, religiously on the NPR (sigh) radio schedule and have for years. Perhaps the reality of having been lovingly cared for as a child speaks to all of us; or the yearning to have been; or the yearning not to be or have been, but to do. And then there’s verse two:

He came down to earth from heaven
who is God and Lord of all,
and his shelter was a stable,
and his cradle was a stall:
with the poor, and mean, and lowly,
lived on earth our Savior holy.

I cannot but think that the times in Roman Judea were much like our own: Imperial domination, debt, slaves, the wealthy elbowing the poor into the gutter, whippings, executions, general brutality. And of course scribes and Pharisees. And yet the adult Jesus sat down with tax collectors[1] and sinners, and defended prostitutes[2] from being stoned to death by enforcers. These are all “the poor, the mean, the lowly.” Perhaps there is a lesson here for the left, in terms of focus.

Be that as it may, I hope you all enjoy your Christmas Eve and the forthcoming holiday. Singing real Christmas carols (not the secular “Rudolph the Red-Nosed Reindeer” crapola, but the hard core Christian stuff, like “It Came Upon a Midnight Clear” or “O Come All Ye Faithful”) was one of my favorite things as a child, but it may be that, with aerosol transmission, we should not be doing that for now. Or if we are eating together, we’ve thought carefully about distance, seating arrangements, ventilation, and risk (who’s bearing it).

It’s been a rough year, and I wouldn’t advise anybody to try to hold themselves to any sort of baseline of Christmas perfection, not even “for the children.” Perhaps the best thing to do is to go out, alone or together, and silently look up at the stars, and be thankful simply for being here.

Water Cooler will return on Monday. I’m leaving comments open, and please be excellent to each other.

NOTES
[1] Tax collection in Judea was privatized, as in pre-1789 France.

[2] John 8:1-11 is one of the passages that convinces me there was a historical Jesus, however dimly seen though “the scriptures,” because who would make that parable up? The setting is rather like a Town Hall, with the Pharisees playing the role of the Tea Party, and setting up a big gotcha moment for the media of the day. But Jesus, wits honed by years of disputation, cleverly turns the tables on them. And then “they went away, one by one, beginning with the eldest” is dry, very dry. Why did the eldest leave first, one might wonder?

Readers, feel free to contact me at lambert [UNDERSCORE] strether [DOT] corrente [AT] yahoo [DOT] com, with (a) links, and even better (b) sources I should curate regularly, (c) how to send me a check if you are allergic to PayPal, and (d) to find out how to send me images of plants. Vegetables are fine! Fungi and coral are deemed to be honorary plants! If you want your handle to appear as a credit, please place it at the start of your mail in parentheses: (thus). Otherwise, I will anonymize by using your initials. See the previous Water Cooler (with plant) here. Today’s plant (JU): 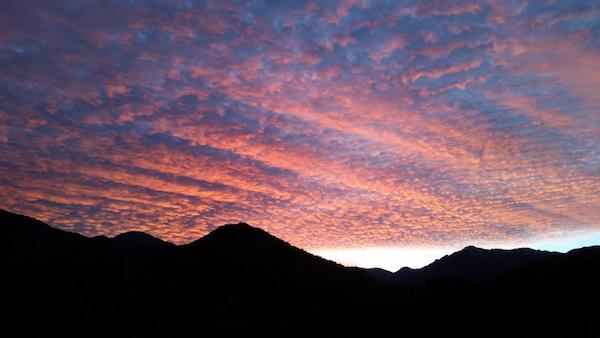 JU: “Sunrise over the Sierra Nevada.” There are plants along the skyline if you look closely, but I felt a sunrise was appropriate for the Solstice. The days are getting longer! More light!

Readers, I could use more photos from readers who have not contributed before! Thank you! NOTE Fungi and coral are honorary plants. Christmas trees are plants, too!