I’m a bit late to write up a solid article in the Financial Times: China pulls back from the world: rethinking Xi’s ‘project of the century.’ It discusses how China has substantially dialed down its once much-trumpeted Belt and Road initiative, in which it planned to fund massive infrastructure projects, largely along the former Silk Road, so as to provide land routes for exports and imports. It looked to be a geopolitical masterstroke, simultaneously reducing China’s exposure to having the US mess with China’s trade in the China Sea and other naval choke points; creating a co-dependency sphere (similar to what the US has with NATO) via directly funding important development projects in emerging economies.1

So what happened? The article keys off a recent report by Boston University’s Global Policy Development Center, titled Scope and Findings: China’s Overseas Development Finance Database. It has gotten some criticism (more on that shortly), but the Financial Times got confirmation of the thesis from multiple sources as well as other corroborating data points. So it’s reasonable to treat the Boston University account as directionally correct even though it arguably missed other funding channels that render its account less stark.

The high level recap of the Boston University report flags two major findings. The first is that China’s official development lending has fallen off sharply in recent years: 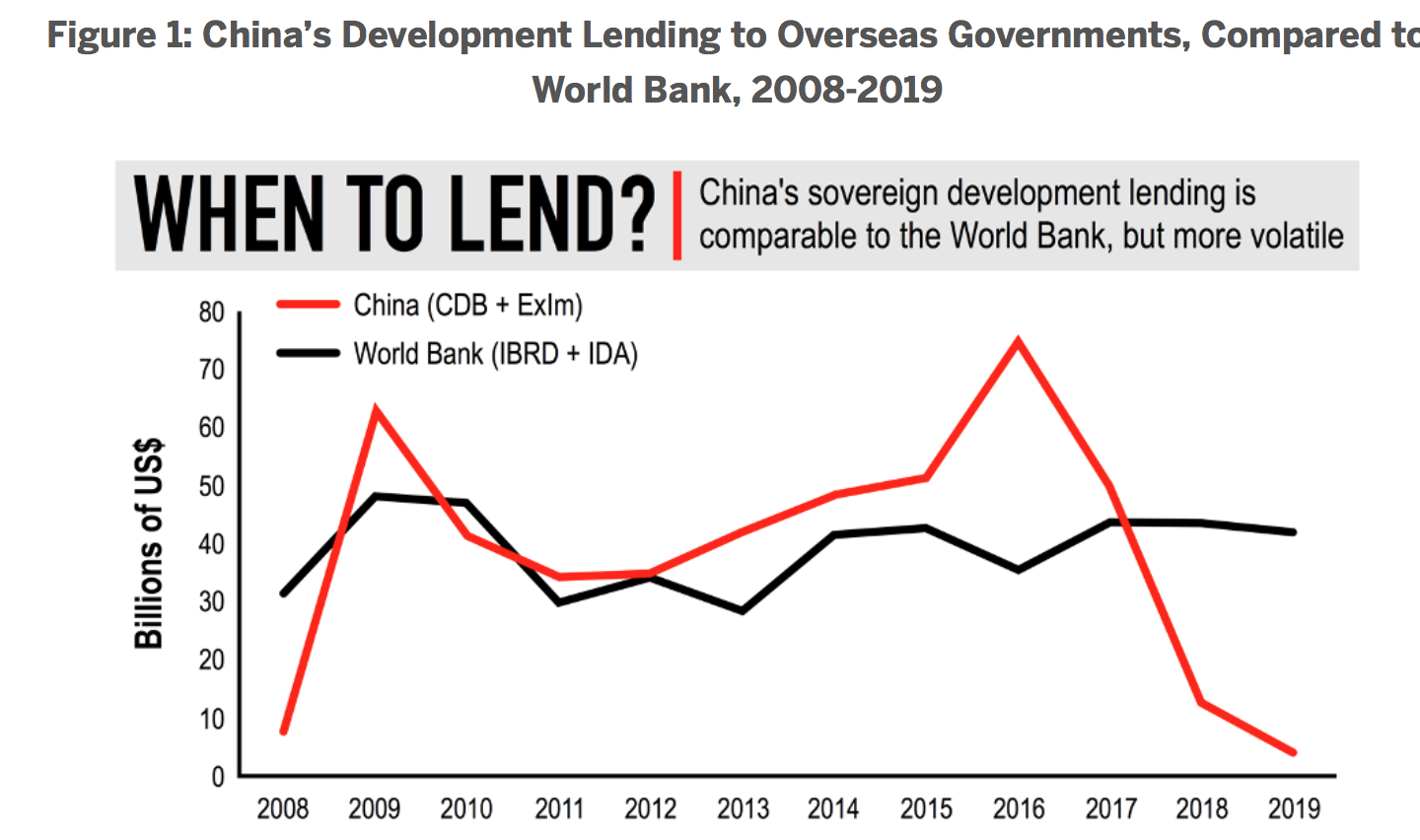 China’s lending also appears to be significantly about securing access to resources, as opposed to simply securing routes to them. Even though some readers have mentioned that China has been very active in Africa, I suspect many would assume it was private interests buying or negotiating deals with mineral and agricultural interests. The markers in Africa shows many official projects:

The Financial Times provides hard and soft data consistent with this picture:

In global development finance, such a sharp scaling back of lending by the Chinese banks amounts to an earthquake. If it persists, it will exacerbate an infrastructure funding gap that in Asia alone already amounts to $907bn a year, according to Asian Development Bank estimates. In Africa and Latin America — where Chinese credit has also formed a big part of infrastructure financing — the gap between what is required and what is available is also expected to yawn wider.

China’s retreat from overseas development finance derives from structural policy shifts, according to Chinese analysts. “China is consolidating, absorbing and digesting the investments made in the past,” says Wang Huiyao, an adviser to China’s state council and president of the Center for China and Globalisation, a think-tank.

Chen Zhiwu, a professor of finance at Hong Kong university, says the retrenchment in Chinese banks’ overseas lending is part of a bigger picture of China cutting back on outbound investments and focusing more resources domestically. It is also a response to tensions between the US and China during the presidency of Donald Trump, when Washington used criticisms of the Belt and Road as a justification to contain China, Prof Chen adds.

“In domestic Chinese media, the frequency of the [Belt and Road] topic occurring has come down a lot in the last few years, partly to downplay China’s overseas expansion ambitions,” says Prof Chen, who is also director of the Asia Global Institute think-tank. “I expect this retrenchment to continue.

Yu Jie, senior research fellow on China at Chatham House, a UK think-tank, says Beijing’s recently-adopted “dual circulation” policy represents a step change for China’s relationship with the outside world. The policy, which was first mentioned at a meeting of the politburo in May, places greater emphasis on China’s domestic market — or internal circulation — and less on commerce with the outside world.

Keep in mind that even though Trump has engaged in a lot of high profile China eye-poking, including his notorious tariffs, Biden is appointing China hawks to key positions, so the reduction in noise levels should not be mistaken for a willingness to accommodate. Recall also that the ultimate challenge for China is to manage the shift from being investment and export led to consumption-led. China has largely managed to postpone this transition.

As mentioned, not all China-watchers fully embrace this picture. The Diplomat contends that the Boston University data is flawed and China is continuing to lend, but more through state-owned enterprises. However, the author says he has an unpublished dataset (erm, show your work!) and cites examples only out of Eurasia, when as you can see from the map above, Africa and Latin America have also been major recipients.

I also wonder how much of this SOE lending is what Josh Rosner called, “A rolling loan gathers no loss,” as in extensions of what look like new credit to preserve the fiction that some sick projects are performing. From the Diplomat:

China’s policy lending in Eurasian Belt and Road economies is facing a raft of debt relief requests and a slowdown in bilateral government-to-government loans. However data analytics that focus solely on policy bank lending through bilateral agreements miss the wider geoeconomic picture. China’s policy banking environment in Central Asia is shifting, but the loan books of the future will be more heavily weighted to Chinese enterprises operating in host economies and host economy state-owned enterprises (SOEs)….

The Boston University interactive based on the dataset took a geospatial approach in examining China’s overseas development financing, focusing on biodiversity and indigenous lands. Loans not attached to a specific project with a geographic location were omitted from the original public data. This means ignoring multimillion dollar loans issued for non-greenfield investments, such as China’s 2010 $10 billion loan to the Kazakhstan sovereign wealth fund, Samruk-Kazyna, and a similar but smaller “no strings attached” loan to the National Bank of Uzbekistan.

As an aside, I don’t see why authors By Tristan Kenderdine and Niva Yau assume a loan to a sovereign wealth fund would have anything to do with development or even domestic investment. Most SWFs invest heavily outside their countries. Back to the article:

More importantly, some media analyses based only on the Boston University dataset, which only covers sovereign loans by policy banks, fail to examine how Chinese policy and commercial banks are behaving operationally in their foreign lending activities. China Development Bank, Bank of China, ICBC, and CITIC have all opened branches or subsidiaries in Kazakhstan, issuing a variety of loans to Kazakh businesses outside of the government-to-government loan scheme. These China bank operations are directly tied to China’s domestic banking superstructure and thus operate in an ambiguous space between state and market.

Again, I think it’s quite a stretch to conflate commercial lending with official development schemes. The Diplomat can argue that some of these loans outside the major development lender channels should be classified as part of the Belt and Road Initiative, but its eagerness to undercut the Boston University’s release looks to have led them to throw too many things at the wall and argue they all stick. Nevertheless, they do have a point with these illustrations:

Examples of China policy bank loans in Kazakhstan omitted from the Boston University database include China Development Bank’s $278 million loan to Kazakhstan for the construction of the Moynak hydropower station and a $1.5 billion loan to Kazakhmys to develop a copper mine in Aktogay, as well as the $500 million loan to Kazakh Development Bank to modernize the Shymkent refinery. Export-Import Bank of China has loaned $808 million to the Kazakh National Highway company for two highways, and another $300 million to Kazakh Finance Ministry for border modernization. These are all examples of policy bank loans with geospatial footprints.

OBOR (Belt and Road) looked like a wonderful way to keep China’s oversized state-owned infrastructure companies occupied as the 2008-2012 domestic construction boom wound down, and a great way to recycle the money from its trade surplus.

But China’s authoritarian leaders had a mistaken notion about the competence of the authoritarian partner governments they invested in. I saw this up close in East Africa. Projects took longer and cost more than planned, then produced low returns also because the client economies are typically managed for political stasis, not economic growth. China has faced the unwelcome choice between taking ownership of white elephants (Sri Lanka), or taking a haircut on the loans (almost everywhere else).

In the meantime, Xi’s domestic policy of favouring pliable SOEs led the CCP to wink at local government borrowing and to an overdue but necessary credit crunch. Simultaneously the ultracompetitive and financially independent Chinese private sector had to be knocked back before it became too powerful to regulate.

So Xi turned off the money tap to OBOR and messily cancelled Ant Group’s IPO because his need to maintain domestic financial (read political) stability is absolute.

While this is a setback for Xi Jinping, any third-world countries that replace their corrupt leaders will remain just as much in China’s pocket, and will have to continue extracting cash from their own longsuffering citizens.

So China will take the haircut on OBOR and suffer several years of below-potential domestic growth plus a delayed transition to a diversified consumer economy. It’s not as if Europe and America will do much better. Everybody makes mistakes

It’s no news that it’s hard to get a good reading on China from foreign sources. However, lending to developing economies is fraught, and it’s not surprising that China has had a lot of misses. Look at the Western sovereign lending train wreck in the 1970s that led to the Latin American debt crisis of the early 1980s. So keep an eye on what China does next.

1 The Belt and Road Project has been incorrectly analogized to the Marshall Plan. Contrary to US myth-making, the Marshall Plan was not munificent. It was effectively recycling European flight capital back to Europe.