Yves here. This headline hook is the lofty cost of DoorDash shares relative to delivery drivers’ meager wages, but the post goes further and documents some of the indignities that these workers suffer, like having no where to pee while on duty.

One of my friends in New York City puts the situation bluntly: “We are now a minority-majority city. We whites here to a large degree occupy a similar position to whites in South Africa before the end of apartheid. We have servants who are nearly always people of color. And the people on the top support open borders to make sure those servants stay cheap.” DoorDash type arrangements institutionalize these arrangements and perversely extend support for them into the middle class, since they can partake of occasional exploitation through apps. But the post also describes delivery workers efforts to set up their own coops. Local officials are also looking into requiring gig economy companies to be required to pay at least the minimum wage for time spent, as opposed to on a piecework basis.

In a bit of synchronicity, Scott just sent a link to a hand-wringing Financial Times article. What might happen if the serfs revolt? Key section:

As the “me here now” economy has shown, total control certainly is irresistible. I mean, who doesn’t like to be waited on?

What I am afraid [New York Times technology writer] Ms. [Shira] Ovide and many others appear to miss is that our current perception of “total control” over these services is deeply flawed. We aren’t in control at all. Unwittingly, we have become extraordinarily reliant. Like the “Upstairs” at Downton Abbey, we have become so used to being served, that we have lost the ability to do things on our own. We are now beholden to Uber drivers, UPS deliverymen and Instacart shoppers. Dig into last week’s Labor Report figures, and you will see that job growth in November was dominated by “couriers” and “warehouse workers”.

A century ago, the elite’s dependence on others was highly concentrated in those working on its own farms and in nearby villages. They knew the names of those who served them. Today’ many are served by faceless men in brown shorts and women working in “ghost kitchens”. The crowd sees many of its most critical providers as interchangeable — if it sees them at all.

While policymakers complain that many of the companies these workers serve are too powerful, I can’t help but wonder whether the workers themselves aren’t even more powerful. A strike by UPS drivers and Amazon warehouse workers today would bring the parts of the American economy to its knees.

Today, the notion of such a widespread employee revolt seems laughable to the beneficiaries of the “me here now” economy. Many perceive “gig workers” as grateful for whatever opportunities they have, and even where unions do exist, they are thought to be impotent in a weak economy. Those Upstairs see the deck highly stacked again labour today.

This perception of invincibility cautions that the risk of a worker uprising is far higher than they think. Among the most striking divergences of the K-Shaped Recovery is the one within the “me here now” economy itself. Those who benefit most from it sit atop the K’s arm, while those who deliver it are highly concentrated on the leg.

By Josefa Velasquez and Claudia Irizarry. Originally published at THE CITY on December 9, 2020 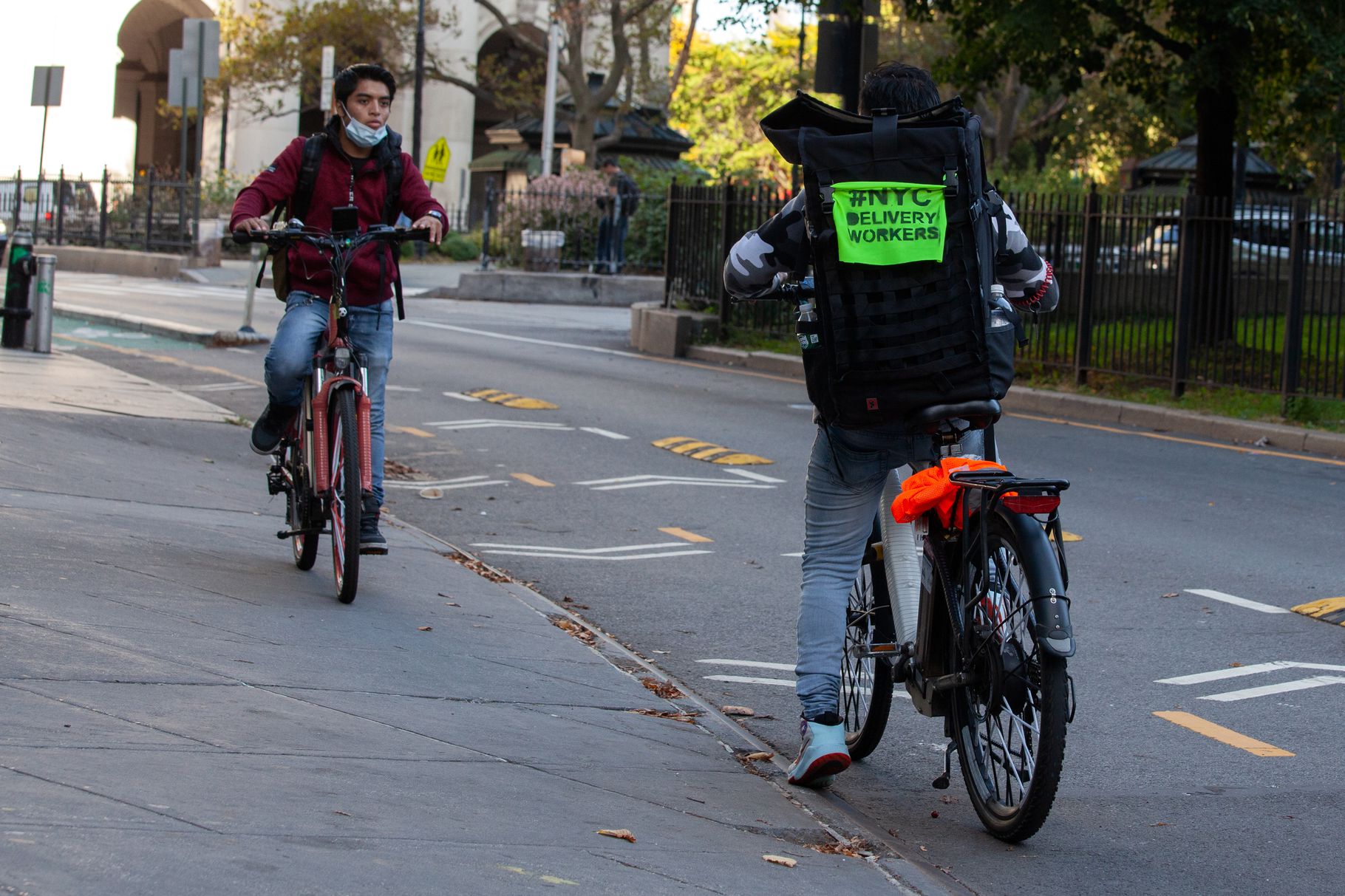 To buy a single share of the food delivery app DoorDash, Williams Sian would have to work two full work days traversing Manhattan, picking up meals at restaurants and dropping them off to hungry New Yorkers.

“And that’s on a good day,” he said Tuesday evening. “This morning, I earned $40 for four hours of work.”

The San Francisco-based food delivery tech platform made its debut Wednesday on the New York Stock Exchange, closing at roughly $190 a share — a price that translates into a company valuation of $60.2 billion.

New York City gig workers who toggle through DoorDash and similar food delivery apps to earn a living say the company’s success is derived from a largely immigrant workforce that’s shut out of benefits afforded to employees.

“You know, maybe they’re worth it,” said Sergio Ajche, a food courier in Lower Manhattan. “But that is all thanks to the work of thousands of immigrants,” scrambling to do “thousands of hours of work.”

Ajche is part of “Los deliveristas unidos,” an informal network within the growing multi-billion dollar delivery industry, fed up with the grueling hours amid the pandemic and dismal treatment they say they receive at the hands of delivery apps. They are pushing for increased protections and better pay — efforts that are getting a boost from local elected officials.

That DoorDash CEO Tony Xu, an immigrant who has touted his own rags-to-riches background, became a billionaire Wednesday has only given momentum to the workers’ campaign, said a labor organizer who works with them.

“It’s a slap in the face to workers — we cannot pay you a dignified wage but we can sell your labor and make profit out of it,” she added.

A Place to Pee

Following THE CITY’s report of the deliveristas’ organizing efforts, several City Council and state lawmakers said they were mulling ways to improve working conditions for the couriers.

Councilmember Justin Brannan — a Democrat who represents Bensonhurst and Bath Beach in Brooklyn where many of the workers live in “Pequeña Guate,” or little Guatemala — told THE CITY he’s working on a proposal to ensure that food app delivery workers can use restaurant bathrooms.

“Ya gotta love, in the middle of a pandemic, DoorDash is going public at a $30 billion valuation while their workers can’t even find a place to use the goddamn bathroom!” Brannan said in a statement to THE CITY on Tuesday night, when the company’s initial public offering was priced at $102 a share.

Restroom access has become a flashpoint for the deliveristas, who work as independent contractors and are not afforded the same treatment as restaurant employees.

“They’re coming in and allowing your business to continue to exist in some ways, and delivering food to your customers, and you won’t let them use the toilet for God’s sake? That’s just human decency — we shouldn’t have to legislate that,” said State Sen. Diane Savino (D-Staten Island, Brooklyn), whose district includes the Brooklyn area where many deliveristas live. 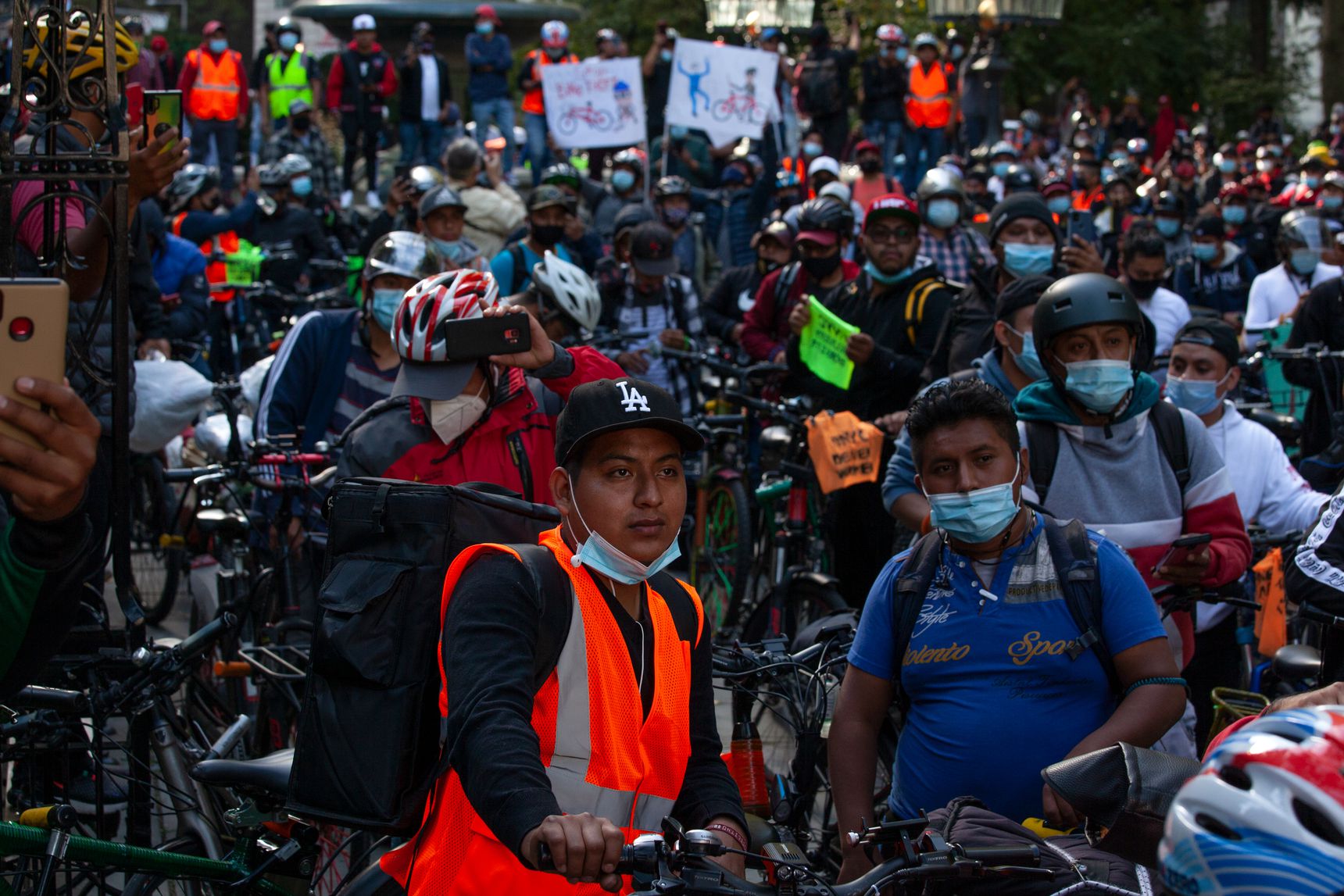 “We’re really urging all restaurants to take whatever measure possible to allow delivery workers that they don’t employ to use the restroom. It’s a common courtesy,” said Andrew Rigie, executive director of the New York City Hospitality Alliance.

“We understand there may be some legitimate concerns. But at the end of the day, you know, one of the reasons that this exists is New York City’s failure to provide adequate public restrooms, like many other cities do,” Rigie added.

Food app delivery workers exist in a “gray area” where they’re neither employees of the apps nor the restaurants, making them an easy target for exploitation, Savino told THE CITY.

But reclassifying them as employees rather than independent contractors — as a California law sought to do before being overturned last month in a voter referendum — isn’t a cure-all and comes with another set of challenges.

“We force them into these no-win situations, that by securing worker rights — that is, by formalizing the work — that kind of by nature excludes those without documents, because then you start to involve more processes for verifying employment authorization,” he said.

Lee calls this challenge “the Catch-22 for workers” — the ad hoc arrangement makes it difficult for workers to improve conditions, but their tenuous status also discourages them from seeking more protection.

He suggests looking for flexible solutions along the lines of the bill of rights codified for the state’s domestic workers a decade ago.

Ramos, who met with some delivery workers this week, acknowledged that reclassification as employees could prove problematic.

“I’m very sensitive to those issues and obviously believe in worker-led movement. Nevertheless, while we figure the classification out, I think that we have to figure out how we’re going to bring these companies to the table and have them create conditions and these improvements,” she said.

Savino, who heads the Senate committee on internet and technology, has been pushing a bill to create a third “dependent worker” classification that would encompass app-based workers and give them the ability to unionize and collectively bargain.

The reclassification effort was set to take center stage in Albany last winter, but the COVID-19 pandemic curbed momentum.

She said negotiations are ongoing to develop a system that offers workers protections without shutting them out.

“Let’s create a system that recognizes the flexibility that people like in the new gig economy but provides the protections that workers need and standards that businesses, whether they are large or small, can understand,” Savino told THE CITY.

Reclassifying delivery workers as employees could also subject them to a lower minimum wage for tipped workers, said Saru Jayaraman, the president of One Fair Wage, an organization advocating for an end to the practice.

While the minimum wage in New York City is $15 an hour, the hourly minimum wage for tipped workers is just $12.50 and even lower for those in the food service industry.

Employers are obligated to use tips to make up the difference between that subminimum wage and the $15 minimum, but complaints abound of workers getting shortchanged.

“Even if New York does something to establish these workers as employees, these companies will — I guarantee you — argue that they should be able to pay these workers a sub minimum wage, and they will be right because they get tips,” said Jayaraman, who’s also the director of the Food Labor Research Center at University of California, Berkeley.

Councilmember Brad Lander (D-Brooklyn) is pressing a bill he introduced in April to expand the city’s Earned Safe and Sick Time Act to encompass all gig workers, including food deliverers.

Lander, who’s running for city comptroller, is also mulling legislation that would build upon a 2018 law that established minimum wage guarantees to for-hire drivers by forcing companies to pay an hourly wage based on the workers’ time spent on the clock, rather than by each pick-up. DoorDash pays based on a per pickup structure.

“We believe we have the legal authority to do that for all gig workers,” Lander said.

“We set the rules of the economy and we have the power to change them,” he added. “And the fact that we’ve let DoorDash, Uber and Lyft and other gig companies change the rules for how work is compensated and how workers are protected and then pretend or treat it like it’s some innovation when it’s just a corporate model to earn money by sweating their workers — that’s on us.”

Councilmember Carlina Rivera (D-Manhattan) has been in touch with Guallpa’s group about how to help the deliveristas, she said in a statement.

“While we are early in the legislative process, we know that New York and other cities have regulated in this space before,” she said.

More importantly to the workers is that they have a seat at the table when policy makers are drafting these proposals and that their input is taken into consideration, said Guallpa, who also called on consumers to support the workers’ demands.

“If restaurants and consumers really use their power to offer protection to workers it would be the most powerful act of solidarity,” she said.

“Someone needs to regulate the industry. It’s not going to happen just by saying it.”